Abstinence, one of the qualities demonstrated and expected from the Dark Knights, and Aurafyre was a Dark Knight proginy, said to have directly descended from Vedir herself.
Unknown to her sisters, she kept a secret, one she won't be able to keep for long. 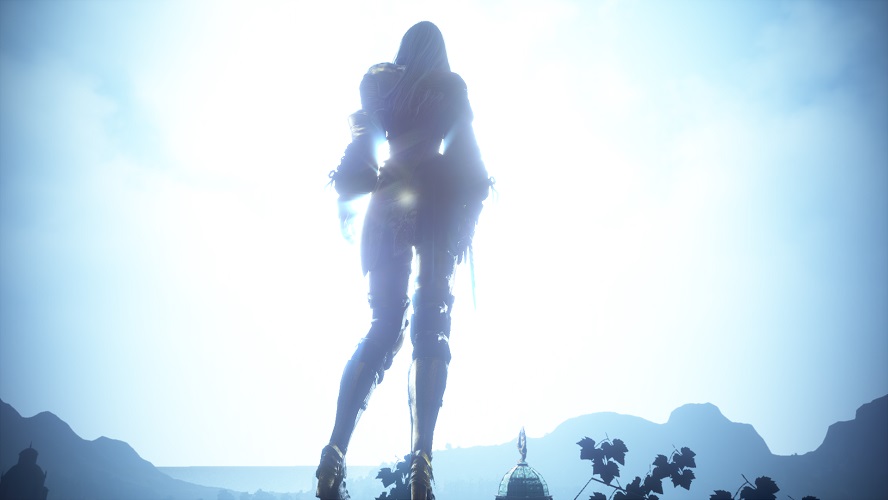 Out of fear for the uncertain, she ran away from the Kamasylvia, and fled to Calpheon city, where no one knew her. She lived in the busy Market District, where she befriended, Denys a young merchant from the the noble Leight family.

Denys, took the pregnant Aurafyre under his care. Despite of the reluctance from his family, who was scared of the scandal should people find out. In a few months, Denys fell in love with Aurafyre and not long after she gave birth to a daughter, Auraenys.

Two years have passed since the night she arrived in the city, and Aurafyre thought to herself, this was not the life she imagined she would lead, it was comfortable yet simple, she was content - it made her feel safe... or so she thought.

That very same night, she had a dream that Ahib Assasins were sent to find her. She felt a deep sadness, as she knew, that Auraenys' safety meant they would have to part ways. She hurriedly woke Denys up, crying, she didn't have time to explain. She whispered to his ear:

"I love you, now and always..." before kissing him, and giving him the infant Auraenys, still in a deep sleep.

That was the last time Denys saw Aurafyre, as she disappeared into the dark of night.

Auraenys sat in her boudoir, still in her undergarments, with a bored look on her face. Across from her, the stylist was showing her dress options, he was saying something, her mind afloat, it was inaudible. 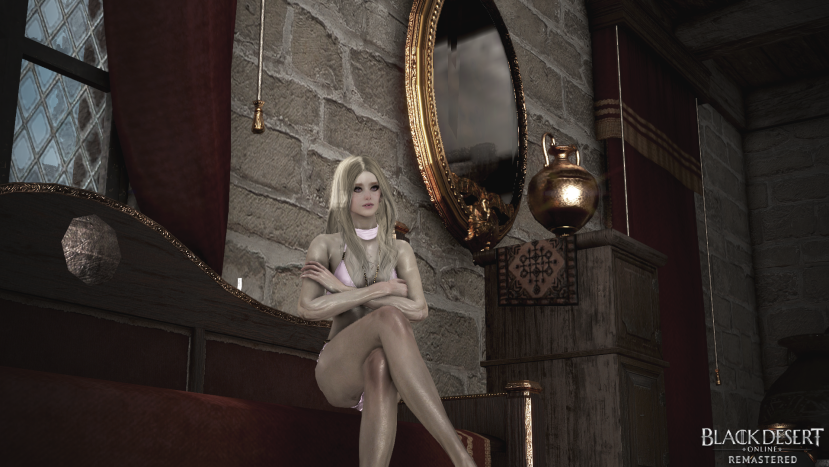 "Another gala, sigh" she thought to herself.

She closed her eyes and suddenly saw crystals flying in the air, a faint dark rose, she tried to touch it...

"Mademoiselle?" one of the maids woke her up. She was daydreaming... the same images from her dream a couple of nights ago. She paid no attention and continued with the same bored look.

"The purple one will do, thank you." as she smiled to the stylist.

"Ah yes, it brings out your eyes, this col..." She blocked out the rest of the stylist's ramblings, and continued to smile with her signature cold stare. She was tired of her life, she wanted to be more like her Aunt Norma.

She didn't have a sense of adventure, but she's always felt closer to nature. Growing up she would spend a considerable amount of time with the Shai's and would visit Valentine in Florin every weekend.

Before she could put on her dress, the stylist finalizing her hair, the door opened, and in came her aunt Elina. 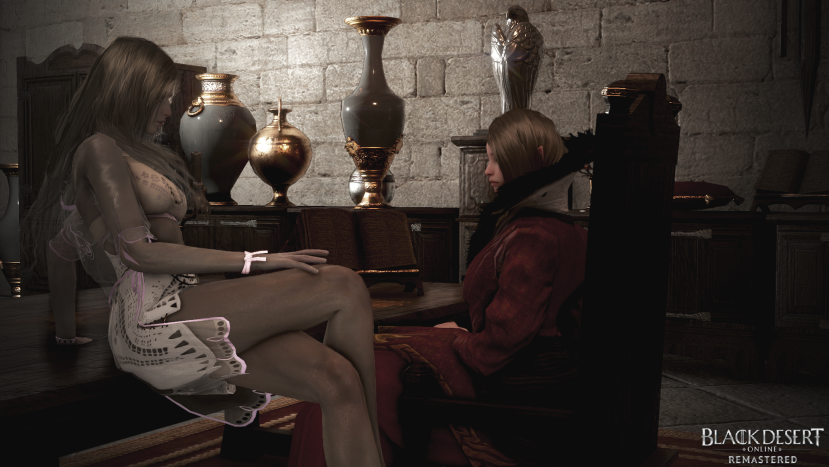 "Aura darling you're not yet ready? You know this is the most important gala of them all".

"It is the gala where we introduce you to society, so cheer up" Elina said.

"I will" Aura replied with a small smile on her face.

Aura walked down the flight of stairs, graceful and poised, she grew up to be a beautiful young lady. 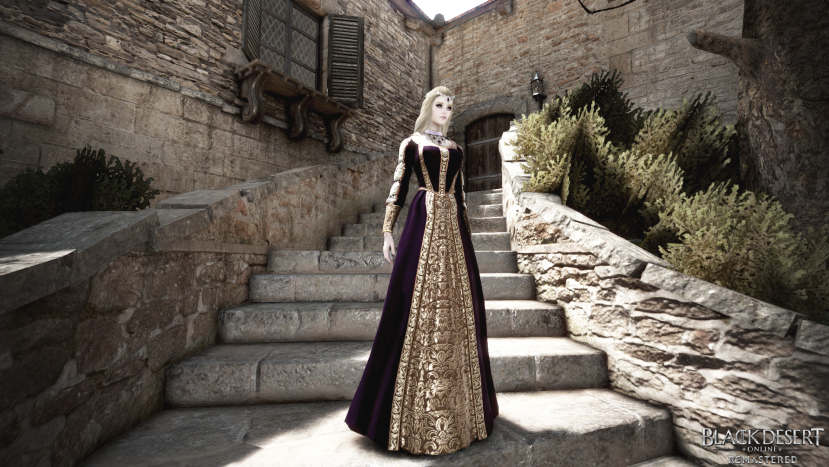 To the people of Calpheon, she looked odd, otherworldly, with alabaster white skin, silvery-gold hair, and big lavander eyes. Invisible to the naked eye, but if one is to look closer, there is a slight point to her ear that is not easily noticed. Everyone just always thought Denys knocked-up an elf, and small, varying rumors of Auraenys' ancestry would circulate every now and then.

Aura looked at all the people who came to see her, as she reached the final steps of the stairs. She barely knew any of them, other than a few friends she grew up with, who now attended the Holy College, some friends from the Northern Wheat Plantation, and Shai's from Florin. 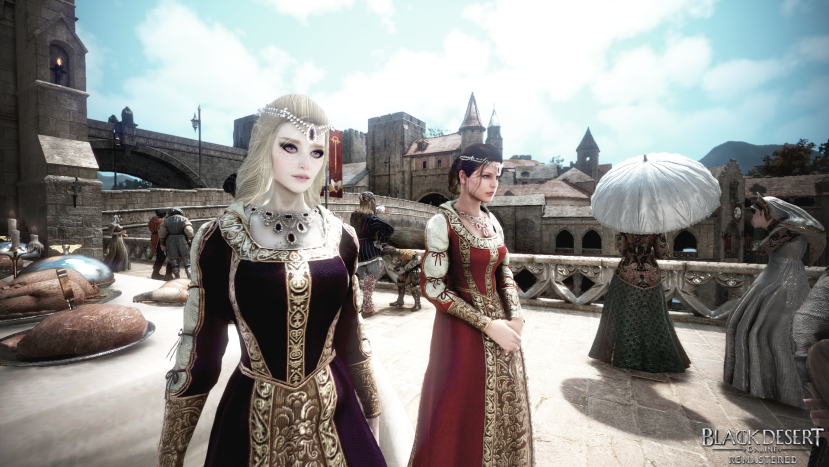 Most in attendance were "important" people from Calpheon allies, Olvia and Keplan, and dignitaries from Velia and Heidel.
From across the room, walked a proud noble, gesturing to take Aura's hand for the first dance. It was Belmorn. She reached for it to shake it, politely smiled, and declined. When all of a sudden a messenger came running across the ballroom.

"Madamoiselle, I have a message... your father."

"Father? Where is he?!" Aura said as worry starts to fill her face. 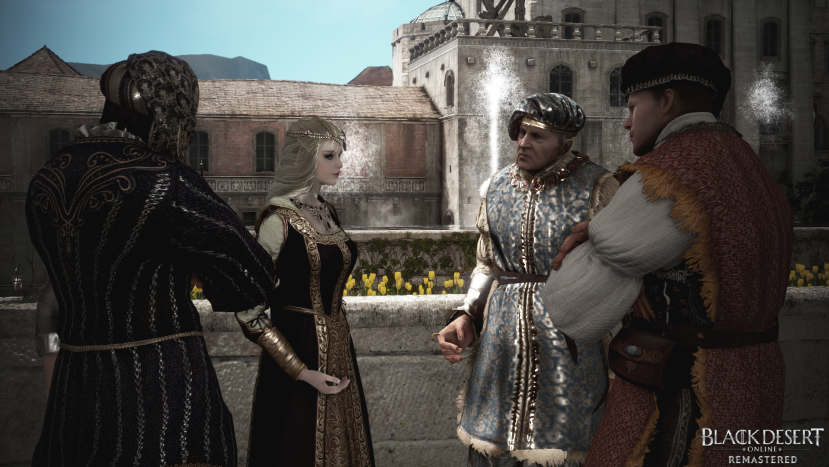 P.S. This is my first story, open to suggestions on how to make it better.

You can view my other written topics HERE.

Thanks Veonya, but I only made this so Ibarra can include me in his story, which you suggested. Go make yours too. Grapes!

What do you guys thinks will happen next? or do you have suggestions on what should happen next? The closest guess will get 1 Essential Package (Permanent Game Access + 30 Days VP).

Thank you for the mention, Aura! It has been a pleasure working with you for your story.

Great story, I can't wait to know what happens next.

@Ibarra, I got inspired reading your stories. I can't wait for you to include Auraenys in Crisostomo's adventures!

Do you have any suggestions how I should proceed with this story?

@Aura, wow, thank you for the kind words! And yes, I have a story in mind. It's a short story with a little comedic effect. It'll take place at Port Epheria, when you're ready, just say the word hahaha. It'll be an honour to be working with you again.

As for your story, my only suggestion is to follow your heart on how you want it to proceed, it takes place in your world so everything you think of can and will happen, and it will flourish. That is the beauty of writing a story.

I'm ready as always! I want to read it today! haha.

Thanks for the tip for my story.

@Florentino, I get what you mean re writing the story, but I want to hear everyone's thoughts and maybe let the comtribute as to how they want the story to mover forward.

I'll be looking forward to it.

@Ibarra, while you're at it, I'd like to know your thoughts.

I'm thinking her father calls for her to make her run errands for him. Either as a liaison of the family to notable people like the Kalis Parliament or to be sent on a "diplomatic mission" to some country far away like Mediah or Valencia, we can also add Kamasylvia where she has this "familiar feeling" of the sort that would make her realize her true potential and origin.

I'll be looking forward to how things will unfold.

That's a great suggestions Ibarra! I'll definitely put that into consideration when I'm writing the next chapter. I would like to see her in 1 of your stories though.

In the lore, the Dark Knight's left Kamasylvia and moved elsewhere. I couldn't find the place labelled in the map. I was thinking maybe she comes across a group of Dark Knights on her way to meet her father which will lead her to travel to Kamasylvia to find answers.

What do you think?

But the thing is, yeah, like you said, it's not on the map.

But with the current information from the Dark Knight's Awakening Quest, the Faceless Vedir NPCs are located at the Mediah Region, specifically at the Tungrad Forest.

The Dark Knights faction have a self-imposed exile but they still have a mission to protect Kamasylvia so they must be near the Kamasylvia Region but not in it because of their exile.

Some of the lore about the Dwarves state that the Dwarven race came from the now barren Southern Dwarf Kingdom of Dwarfland/Dagan.

I hypothesized that the Barren Land is around South of Mediah and Drieghan, the yet to be accessed areas even on the KR server.

With this, you can either have the setting at Mediah or at Drieghan where your main character can meet some of the Dark Knights.

But these are just speculations and hypotheses hahaha. We'll know once Pearl Abyss released some news to the KR version first.

I hope this helps and good luck!

Sorry for the late reply, we really need a notification system in the forums hahaha. I didn't know you asked me a question until I open your post again.

@Ibarra, thank you for this. I read the same on the link you provided but you could be right, it could be in an unreleased area, as I believe the Ahib moved somwhere close (Drieghan).

I am keeping your suggestions for when I continue writing the story.

Thank you Yoarashi for all the love!

Any suggestions on how I can tie this with my guild story? I've been at it the whole day, it's not coming to me!

Sweet! I love how you write! Reminds me back in college when I used to devour novels voraciously, only time I wasn't reading was when I'm at the gym or taking a bath lol.

Thank you! I'm not a very good story writer but I wanted to make a back ground for my chartacter so Ibarra, another Supporter who write's nice stories, can include me in his story. I'm still unsure how to proceed with this one but I am open to suggestions.