HOW TO SUCCESSFULLY SNIPE A NODE FOR YOUR GUILD

I have noticed that a lot of smaller guilds have been sniping a lot lately. This guide will give you more insights in node sniping and give you more success in your conquest to conquer a node for your guild.

What is Node Sniping?

Node Sniping is when you place an open fort to a node war area and hope that no other guild plants a fort and fight against you. The objective is to claim a win in node war without even fighting.

Why snipe a node?

How to snipe a node?

NOTE: Your guild must have at least 10 members to plant a fort in a node war area.

• The node war filter should show after selecting the Node War Information.

There are currently 6 Tax Grade options to choose from. When  sniping a node, always try to snipe a Tier 3 or Tier 4 node. Sniping in Tier 1 and Tier 2 give lower funds to your guild, thus a Tier 3 and Tier 4 snipe is always recommended.

Thus, sniping a Tier 3~4 nodes gives the most guild funds and are the most worthy to snipe. 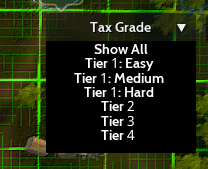 Selecting a Node to Snipe:

After selecting either Tier 3 or 4 in Tax Grade and the Day you want to snipe, the Map will highlight all nodes that are available for the day. An example below is posted. 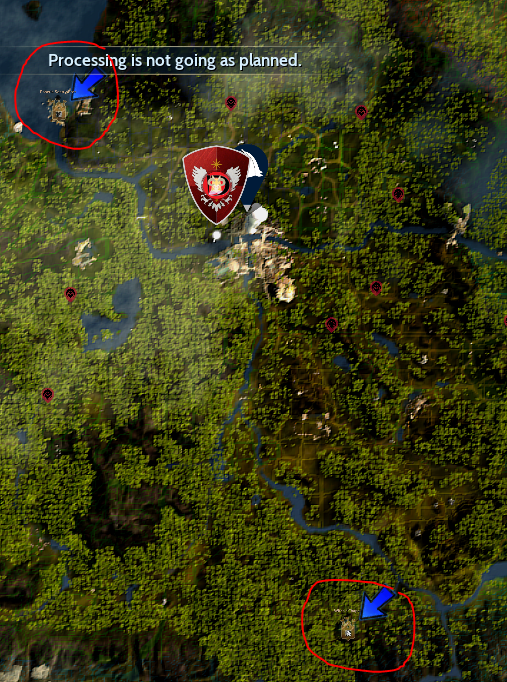 Hover your mouse to the node and you will see the node details which includes: The occupying guild owner, how many guild have planted in the fort, what tier the fort is, and the day the node war for that fort happens. 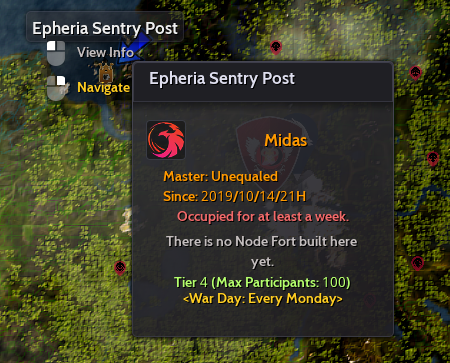 IMPORTANT:  If you are looking to plant in a Calpheon node, you must be in Calpheon 1 server. If Balenos, in Balenos 1 server. If Serendia, Serendia 1 server. Mediah 1 for Mediah area and Valencia 1 for Valencia area.

What you want to check is how many forts has been in that node. 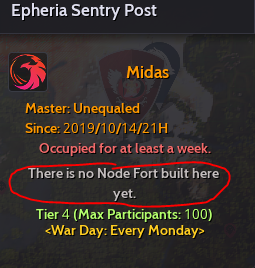 Look for nodes which has No Fort built. If some other guild has planted in that specific node, it should show Node fort built: 1, 2 3 or the number of guilds who planted.

When sniping a node, what we are looking for are nodes that are free. Meaning, no other guild has planted a fort on them. like the image above.

As a bonus, sniping in a node which has no occupying guild will yield you more funds. It should look something like this: 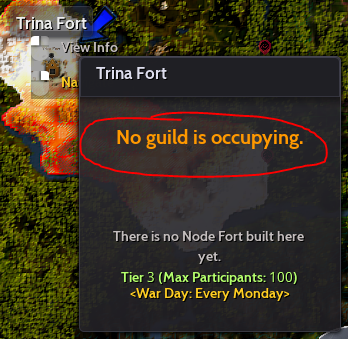 HOWEVER, these nodes are usually contested and many guilds try to fight out to claim the bigger funds. If you get lucky though and find a node which has no owner and no one is planting a fort, go ahead and snipe! Be careful though as others might drop a fort at the last minute.

What does this mean "dropping a fort last minute? In SEA Server, Node war starts at 9:00PM. The deadline for planting a fort is 8:00PM thus a guild should drop a fort before or by 7:59PM. Some guilds use this to their advantage and look for a node that has lesser or no forts built and plant there at the very last minute. You can do this to snipe forts as well by planting at last minute to be 99% sure that no one else planted a fort in that node.

I do not recommend in doing this though as you might have shortage of time in planting the fort yourself. Plant the fort at around 7:30PM~7:45PM and hope that no other guild will do a last minute drop.

What to do when another guild drops a fort in the same node?

• When the war starts, try to scout out the area for your enemy.

• There are only 2 types of enemies, first, a guild with a strong army, and second, another snipe guild. Clearly if the enemy guild is a strong guild, then the snipe failed. However, if you see another snipe guild, then just destroy their fort straightforward. If you can fight off their officers, do it, else just give them the node.

NOTE: When sniping, only plant a fort with no annexes. We try to use as little funds as possible here if we do not plan on fighting for the node.

It is also important to have guild officers help you in planning out your snipe. Have at least 1 officer stand by each server to keep checking on these highlighted nodes. So you need at least 4 guild officers and yourself to stay at Ser1, Val 1, Bal 1, Calp 1 and Med 1. Guild officer at Serendia 1 check nodes for Serendia territory, Balenos 1 officer for Balenos territory and so on.

How to plant a fort? That is for another guide.