I hope you are well.

For the past few months, I frequently saw that most of the new adventurers asked where are the world boss located and when are they gonna spawn. I saw many new adventurers got lost while going to Nouver world boss and asked for help. Today i'm gonna show you how you can optimize your World Boss Raid by placing alternate characters at boss spawns and how to quick switch your alternate characters when theres 2 world boss at the same time.

The 9 World Bosses are Kzarka in Serendia, Nouver and Kutum in Valencia, Karanda, Quint and Muraka in Calpheon, Mirumok Destroyer Offin at Kamasylvia, Crimson Dragon Garmoth at Drieghan and  the only Ocean World boss -Vell. Each of these world bosses drop unique boss items which are highly sought-after powerful weapons and can fetch a high price in central market. Generally you need high attack & defense power to kill world bosses and death to a world boss will have a penalty. That's why many new adventurers doesn't participate in World Boss Raid from the start. But with my guide, you can easily take part in these raids and get boss loot which can help you on your adventure. 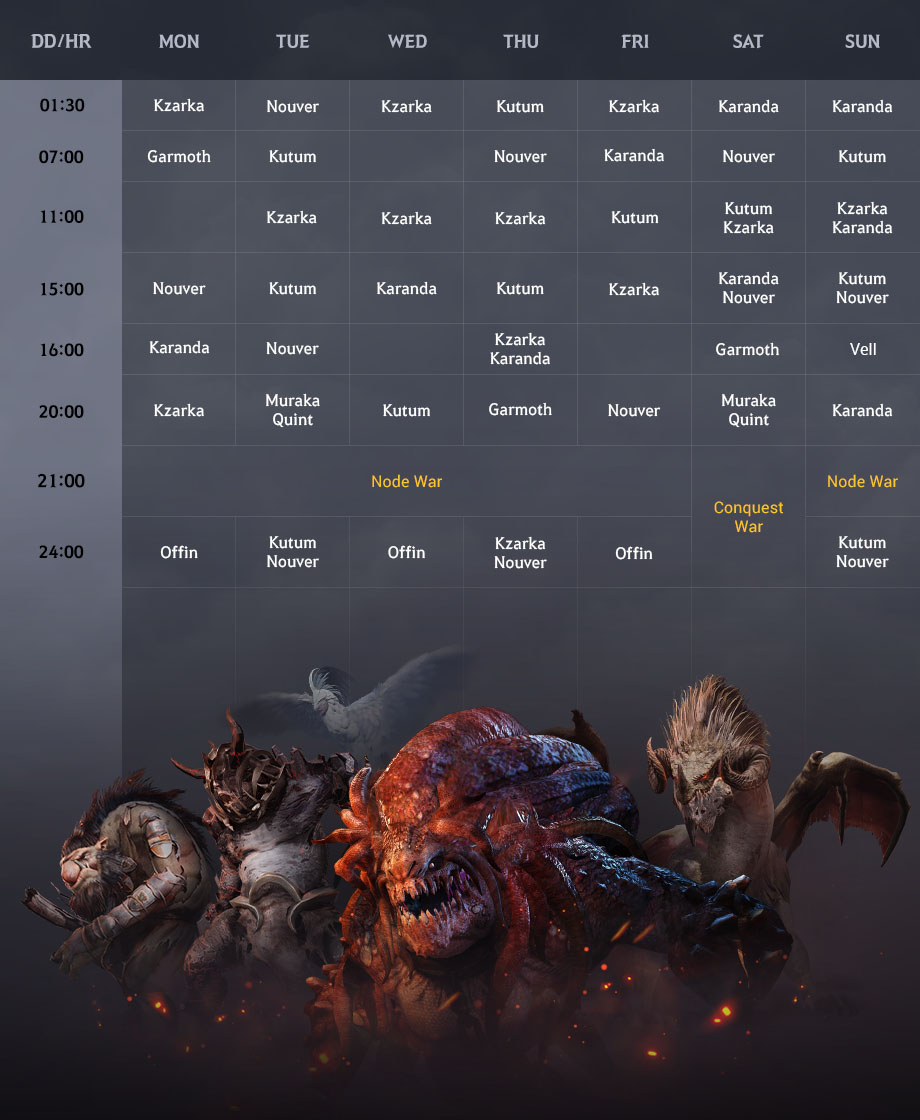 This is the world boss schedule for SEA servers with GMT +8 timezone. You can find this schedule ingame by pressing “Esc > Information > BDO Wiki > Combat >World Boss Raid” or in the BDO wiki. Additionally you can use another third party website called BDObosstimer where you can also get  notification for BDO world bosses every day.

There are a huge variety of classes in BDO and each of them are specialized in various activities. Thus some classes will have an easier time killing World bosses than other classes. Here are some classes that can do world boss easily with low gear.

⯈ Archer - Archer is called “true ranged class” in BDO and because  almost all skills of Archer are ranged attack. Archers can easily keep themselves at a distance from world boss and do massive amounts of damage even at low gear.

⯈ Ranger - Ranger is the female counterpart of archer who can also deal damage from range. With recent ranger succession, rangers can level up their ranged abilities even more and can literally "rain" arrows from distance.

⯈ Wizard - Pretty much the same as witch in pre-awakening which also makes him a great ranged damage dealer.

Remember, these are Safe classes that do ranged damage from a distance. You can pick any other class but you will need to work harder because the closer you are to the world boss, the higher the chances of  getting hit & dying from world boss. You need to learn various defensive mechanisms such as "Block", "Frontal Guard", “Super Armor” & “I-Frame” abilities of your class and use them for survivability.

Please note that, Gears that i am recommending is Free and can be completed multiple times on multiple characters. You dont need to spend you hard-earned silver for gearing multiple alt characters, but if you have extra gears lying around in your storage, those will work too. With free gears and accessories, you can easily reach 140 ap and 180 dp. Some of the newer quest accessories can be enhanced, thus they'll be granting you even more ap. Please note: you need to complete upto Mediah chapter in the main storyline in order to get most of the gears. Here is a example of how much ap you can have with free quest gears 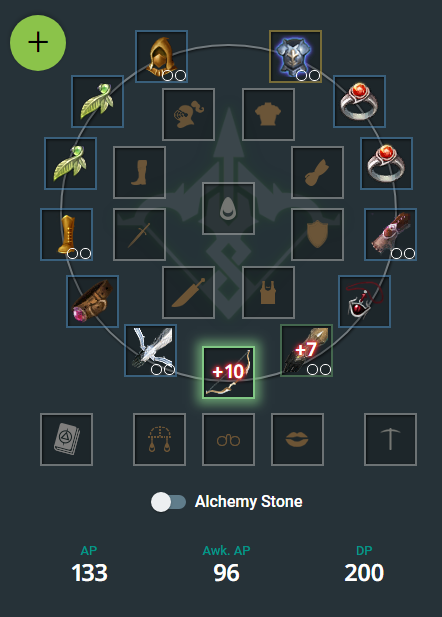 ⯈ Main Weapon : For Main weapon, You can use any +7 main weapon, I prefer Rosar +7 weapon. Additionally You can use Black abyssal Weapon you get from completing main quest at mediah.

⯈ Helmet: Rugged Valley Helmet is a free helmet you get for completing mediah merchant quests.

⯈ Gloves: Honorary Combatant's Gloves is another free gloves you get from valencia quests.

⯈ Body armor: Roaring magical Armor is the best free armor you can get  from the black spirit gift quests. These armors are all free items that you can get multiple times using multiple characters. 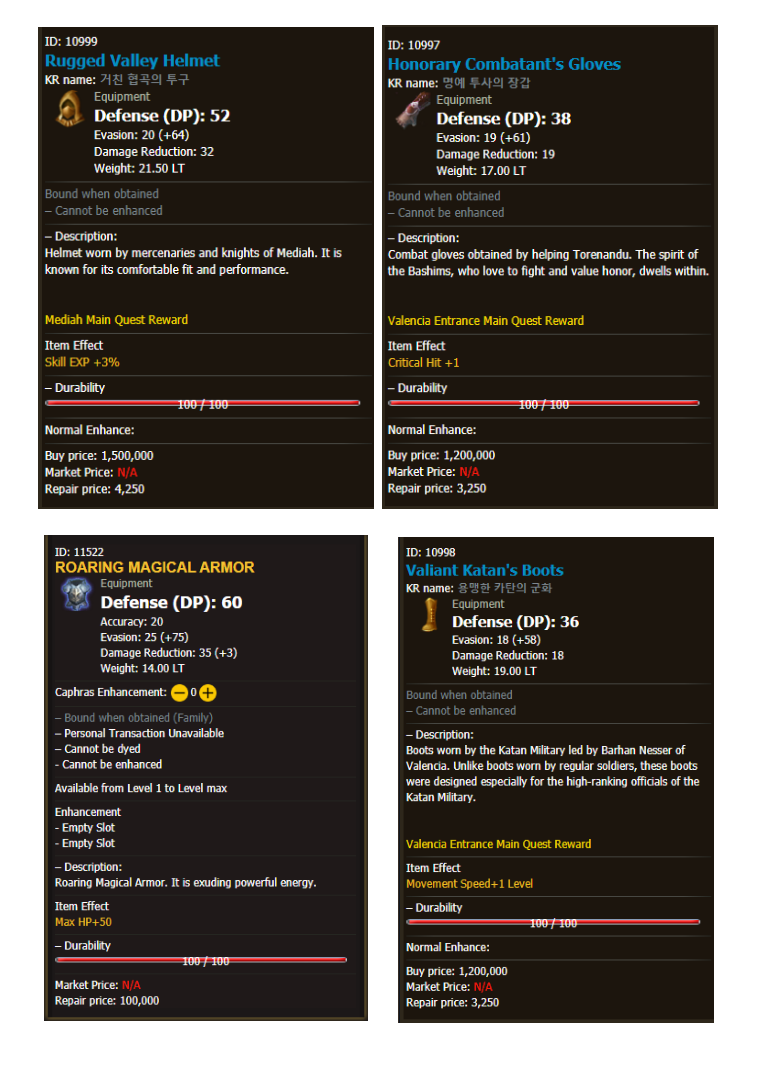 Good old Asula accessories are enough for alt characters. Alternatively if you have the new "quest accessory set", you can also use them. These are: 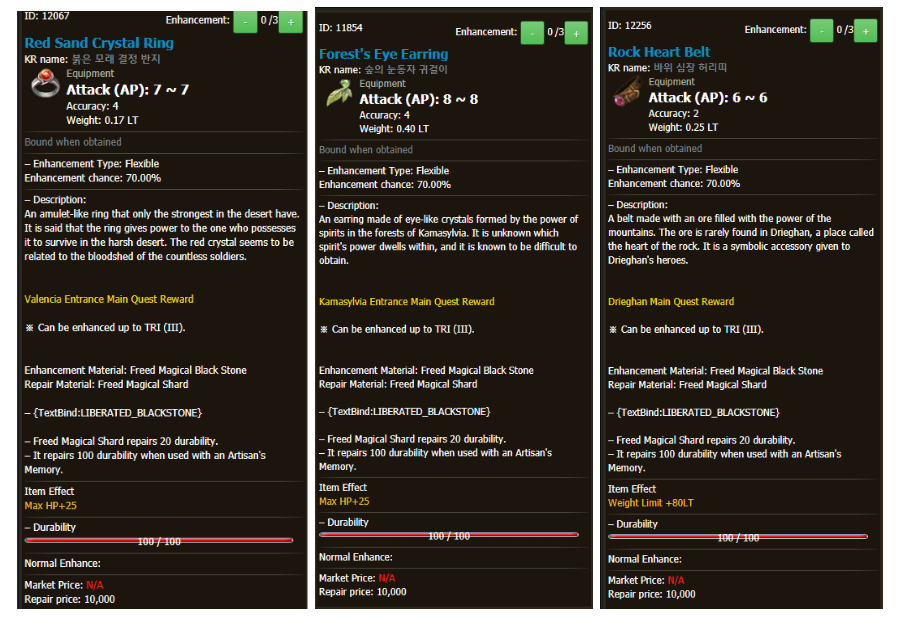 For World boss Kzarka, Boss spawn entrance is at Serendia shrine. You can place your character at the outer courtyard of Serendia shrine or directly in the Chamber inside the shrine where kzarka spawns. Kzarka may drop ★ Kzarka’s Sealed Weapon Box, Belonging of Adventurers, Liverto Weapon Bundle, Mark of Shadow, Shrine Guardian Token, Black Stone(Weapon), Black Stone(Armor), Silver Coins, etc. 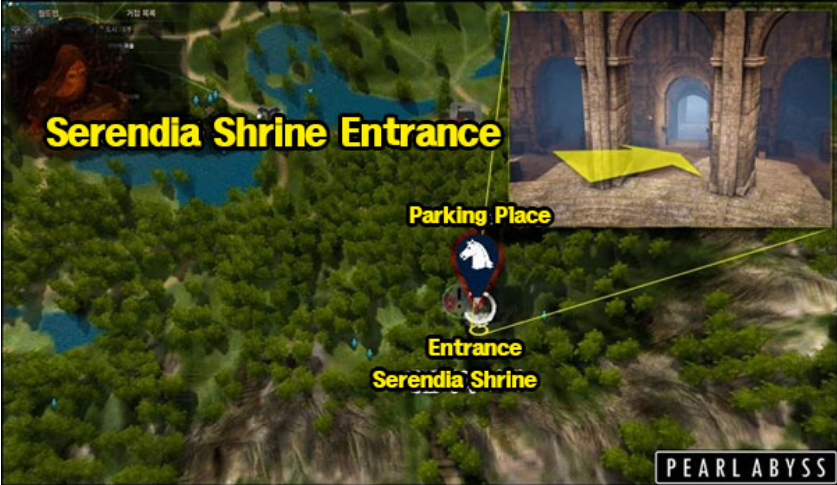 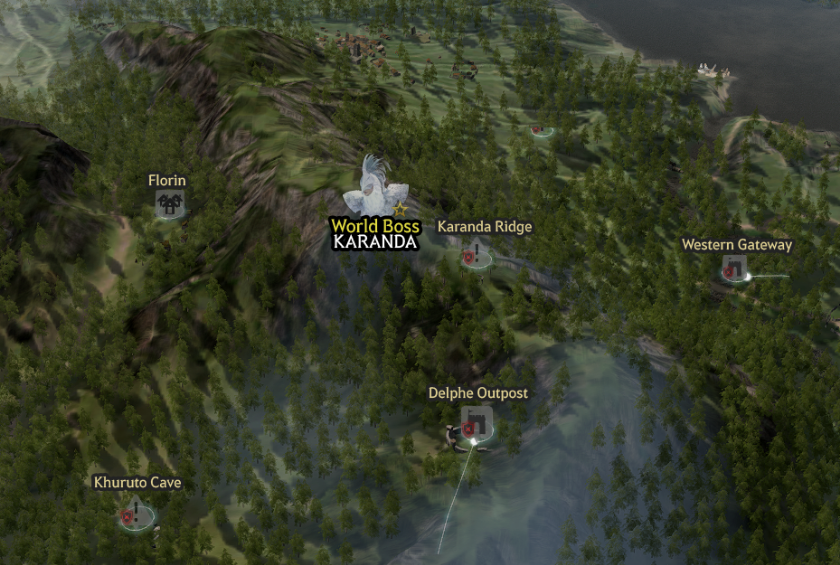 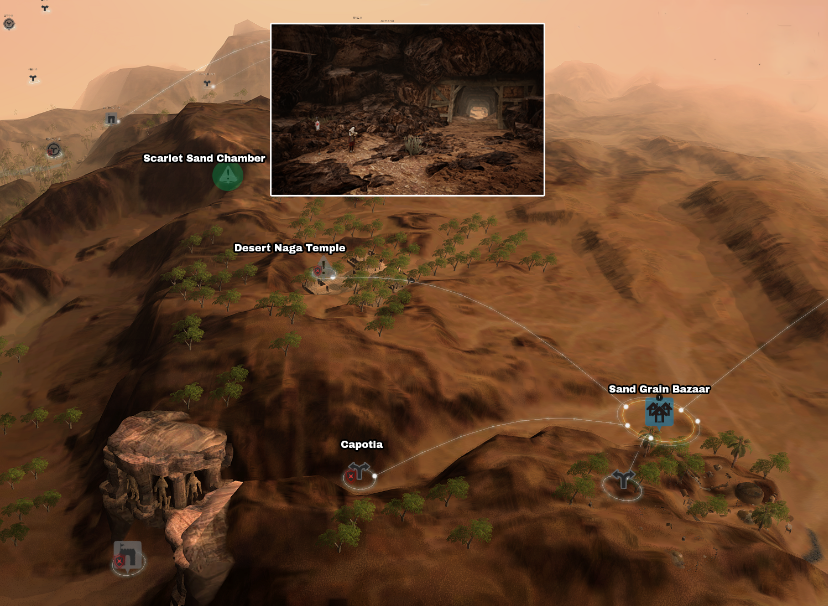 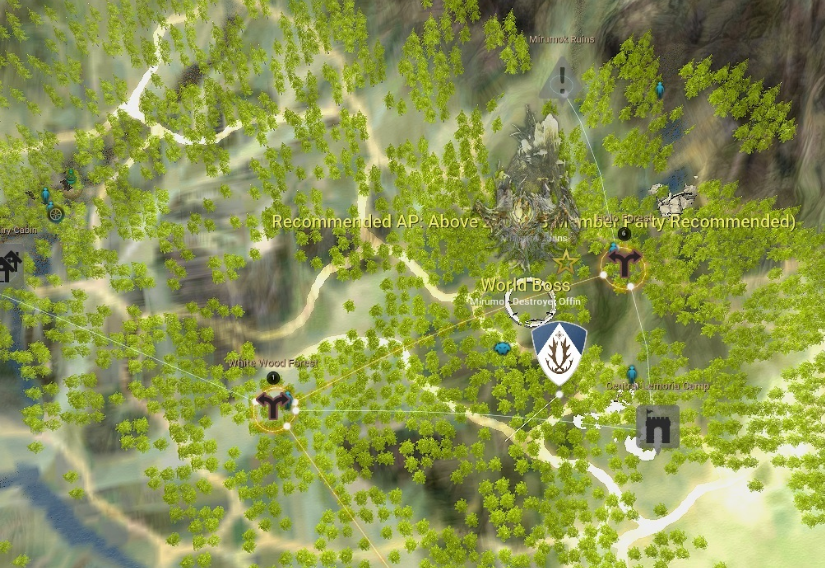 World Boss Nouver is a dragon that spawns deep into the valencian desert. In my opinion this is the hardest world boss for the new adventurers since it spawns in the desert where there is no navigational aid. You can use Ancient Explorers Compass to navigate in the desert, but most adventurers don't use it because of its high price. You can navigate in the desert without any compass if you know the surrounding area features. For new adventurers, I would suggest placing your characters at the sand grain bazaar since it is the closest node near Nouver. Then follow the adventurers who are going for Nouver raid untill you learn the route. Once you are amiliar with the Nouver spawn area, you can place your alt character at the spawn area. Theres also a small npc there called "Lonely Galieva" right where nouver spawn ( ty to Hudori for showing me) so you can place your alt there too. Also Watch the video below that shows how to go to nouver spawn area from Sand grain bazaar. You’ll also need ‘Purified Water’ and ‘Star Anise Tea’ to cure desert illnesses since Nouver appears in the desert. Nouver may drop ★ Nouver’s Sealed Sub-weapon Box, Black Magic Crystal - Vigor, Black Magic Crystal - Assault, Black Magic Crystal – Memory, Black Stone (Weapon), Black Stone (Armor), Silver, and others. 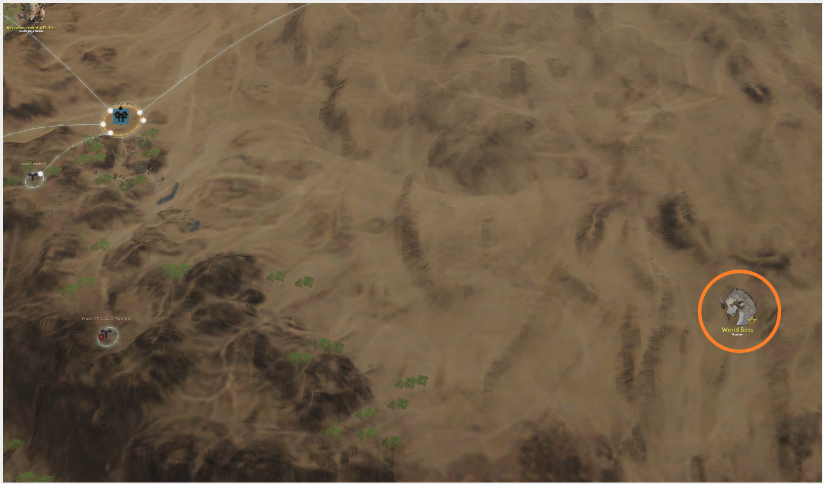 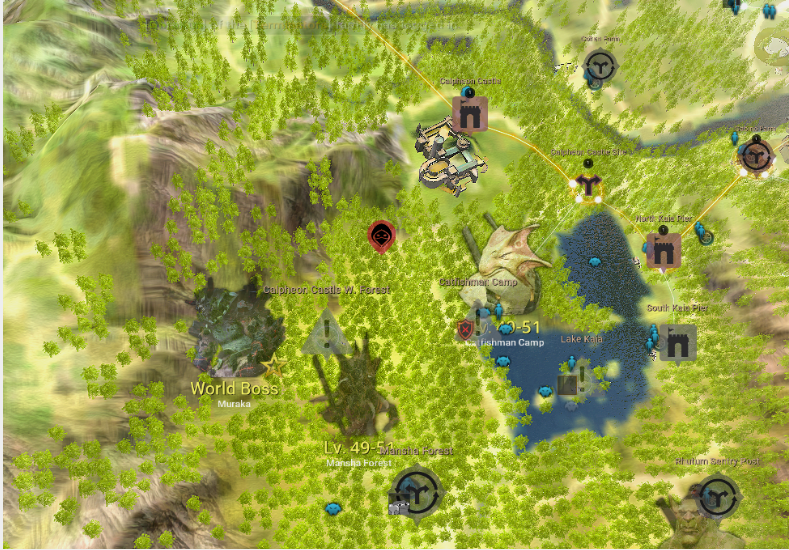 Quint World boss appear near port Epheria / Quint hill. Both of the nodes are really close to the boss spawn so place your character at either of the 2 nodes. Once again, dying to Quint doesnt have any penalty. Quint may drop Mutant Enhancers, Black Stone (Armor), Black Stone (Weapon), Hunter’s Seals and others. 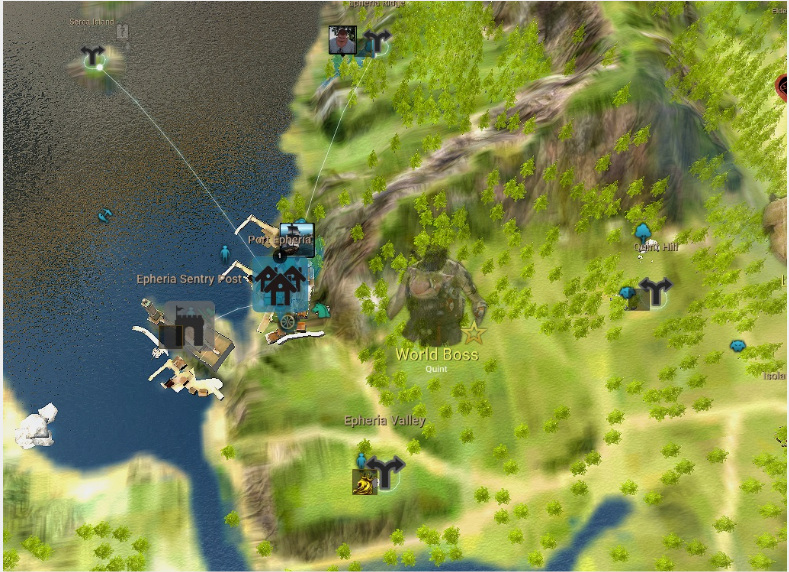 Vell will appear in Vell’s Realm, north of Lema Island. This is the only Ocean world boss in Black desert online ( the other ocean boss Khan is a guild boss). You can only do damage to vell with Ship canons and all platoon members gets loots if any member of platoon hits vell once. If you want to participate in Vell raid, ask for platoon invites to your fellow adventurers, guildies or friends and go to Vell raid boarding their ship. I would not suggest placing a character in vell spawn area, unless u have a ship. Also, Dying to vell doesnt have any death peanlty. Vell may drop ★ Vell’s Heart, ★ Vell’s Concentrated Magic, Rainbow Coral Ring, Vell's Fine Powder , Golden Pearl, Blue Whale Tendon, Daybreak Blue Coral, Balck Stone(Armor), and others.

When there’s 2 World boss appears at the same time, veteran adventurers have a sequence  of attacking world bosses that is  generally agreed by all. These are:

In case of Double Boss Spawn, Make sure you have 2 characters at 2 boss spawns. Then make sure which boss is gonna be attacked first. Switch to your 1st boss character when the boss spawn notification pops up, attack the boss, wait for it die, don't forget  to loot the boss. Then switch to your 2nd boss character, attack the boss and finally loot the boss once it is dead. Congratulations ! you have successfully killed both world boss. After killing both bosses, take a look at the schedule for the next boss raid and get ready for the next World Boss encounter.

With these method of placing alternate characters at the spawn locations and quick switching characters, you will  have easier time defeating world bosses and the possibility of getting multiple Boss Gears will increase tenfold.

I hope this guide will help new adventurers not getting lost in the vast world of Black Desert Online. Please share this guide to any new adventurers and guildies who needs help regarding world boss using this shortlink  http://bit.ly/wrldb0ss . If you find any wrong information in this guide, please let me know and I will try to correct it. If you find this guide helpful, please give it a ❤ and leave a comment. If you have any questions, Whisper to my ingame family name "Frankie" and Frankie#9961 at Discord.

Till then, Have Fun Exploring ❤

Nice guide. It is a very indetailed guide for the new players who are interested in killing World boss.

This is a great guide for new adventurers that are trying their luck for getting those boss box weapons drop. :D

Aura have also made a Special Chart for all of us

Welcome to join us.

A great and detailed guide! We need more guides like these centred towards the newbies.

I love the part that you include alternative gears that can easily be acquired during the main quest unlike some that would tell you to disregard those and makes you grind for at least TRI yellow gears and or go straight to boss gears.

With detailing that you can use the quest gears, instead of telling them to get burnout just go get those "BiS gears," they'll not get overwhelmed by the game by telling them to "you should get BiS gears right off the bat."

I think that's why the player base is declining, because of being overwhelmed by the game. A "veteran" would help a newbie instead of berating them.

@Veonya , thank you for your kind words ❤
I missed all previous weekend parties, will definitely join the next one.
see ya there.

@Florentino, Im glad you liked my guide. Yes i agree, we need to make more newbie-friendly guides. Hopefully I'll be making more like this in future so that new players can have a easier time enjoying this game and not rushing like we are told to.

When people ask about world boss on chat, i'll redirect them to this guide

(btw you got any shortlinks(ex bit.ly) to this post?

@LoliNeeSan , Hi. I've created a shortlink just now.  the link is http://bit.ly/wrldb0ss
I'll include it in the guide for future use.  Thanks for suggesting it.

@Veonya Thanks haha
Also thanks to everyone who read the guide.  ❤

Thanks for the tips! Will apply this next time I get the drive to do bosses.

@Auraenys Glad you liked it :D

this is a great quide for new players. But we don't get penalty from dying by Muraka and Quint. Also, if you want to place an alt for Nouver, there's an NPC very close to where he spawns. We always hang out and have some chit chat there before killing that worm dragon.

@PraiLucia Thanks for correcting me. I didnt know about the Nouver Npc. Is it Saimar from Pilgrims of Sanctum: Sincerity ?
I did know abour muraka quint penalty but forgot to mention it. I'll add it right away ❤

Not Saimar. Lonely something something... very bad at remembering names. He's literally at the spawn location of Nouver.

this is the NPC at nouver location that I was talking about: 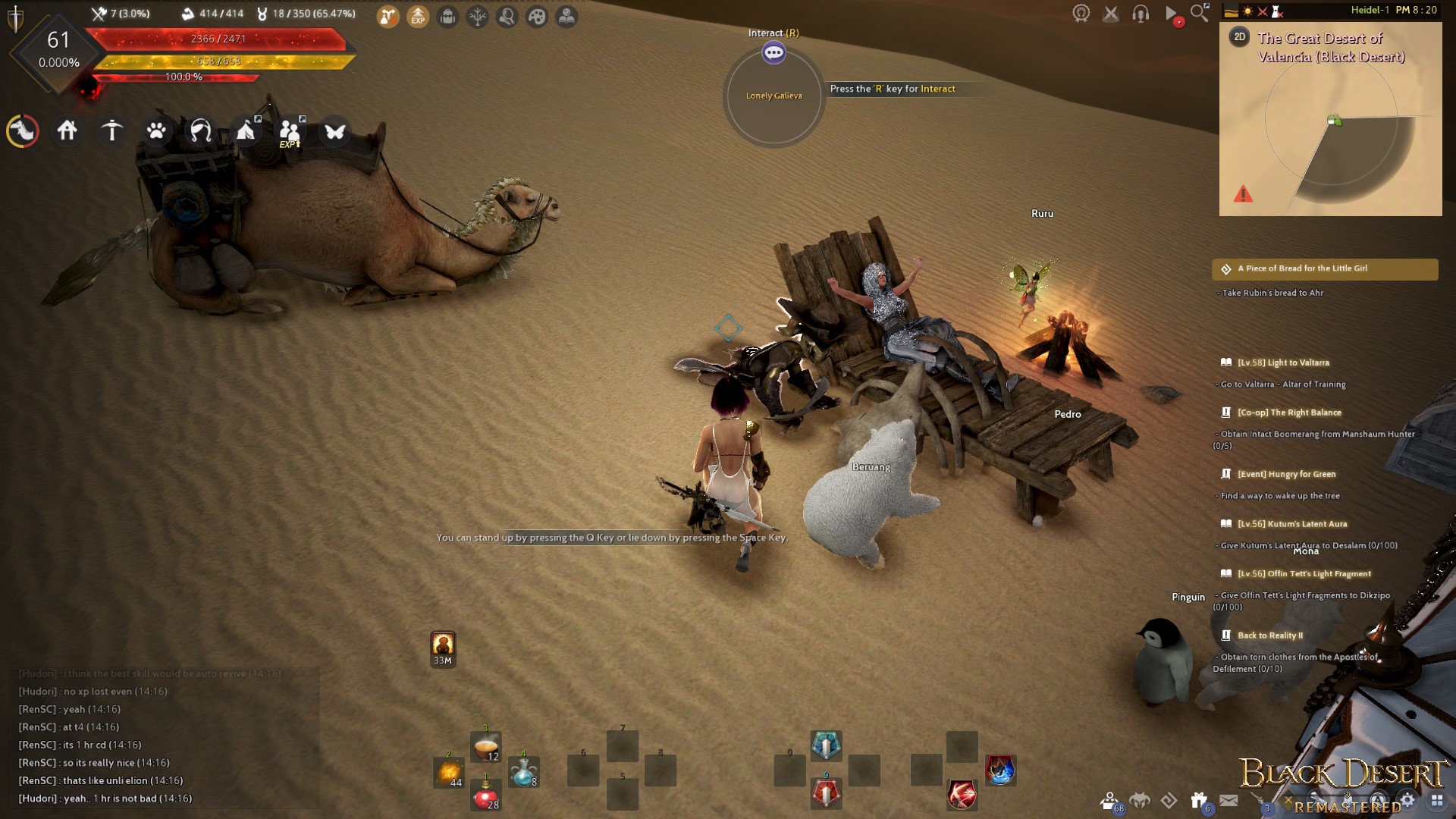 @PraiLucia Thanks so much for your effort ❤ I'll include it in the guide.

Community coming together to make things better, so sweet.

Thanks for making things easier for new friends of BDO!

H1 raise your hands! Although sometimes I wish the other Lifeskillers would move, lots of people here now.