We're only just 16 days into the new year, and already we're seeing a better 2021 in BDO. Celebrating it's 3rd year anniversary, you'd think you've done everything there is to do, but with Black Desert's massive and dynamic content, even the things you've tried in the past may have been reworked, along with several other new features.

There's no better time for newbies to start, returnees to come back, and current players to continue their adventure. Below is the first half (first 5) of my TOP 10 things in BDO in 2021 covering my experience with progression, with the second half coming on a later date, to cover other contents like Lifeskills and money making.

Ofcourse this is No. 1 on my list, it's one of Black Deserts redeeming qualities, outside of combat. The new Winter Season just started and with it comes Francesca Seric or Nova, Black Desert's latest and very first named character class. She is the daughter of the late king of Calpheon before the parliament was the ruling body. Create your Nova now as a Season Character and get rewards for both Nova and Season character progression. 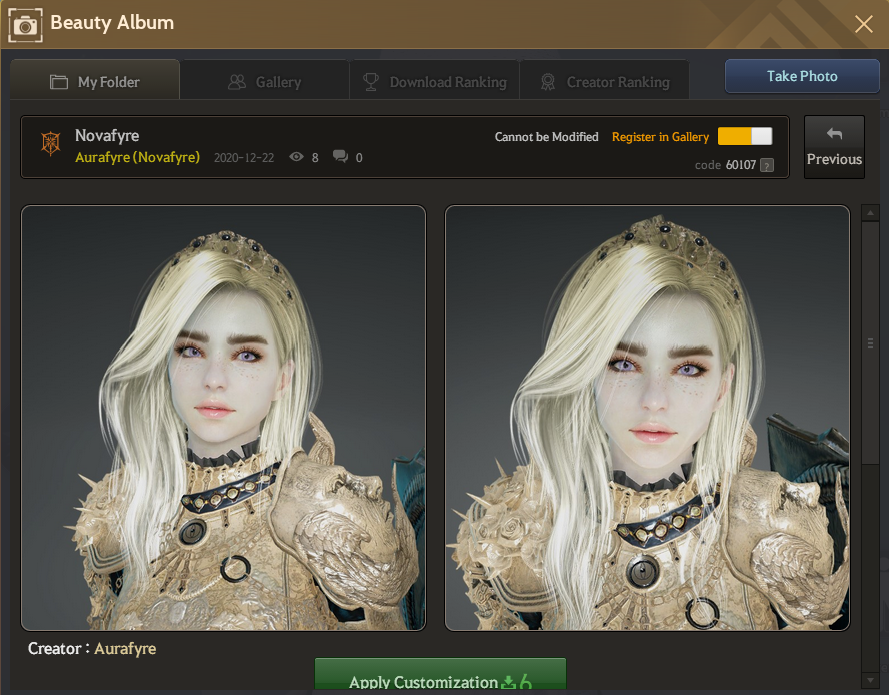 For every progress you make with a season character, you get additional rewards, rather than playing a non season character. This is best for new players to get a headstart, and for current players to boost their progress, or try something new. Everyone will get the same rewards for season character progression. Also, your season character can be of any class, you just get more rewards by playing Nova, since you're hitting two birds with one stone. Nova Awaken and Succession questline has also been released last January 6, and unlike other classes where you have to do 2 separate questlines, the Nova Succession quest is just one quest, that you can immediately complete after the Nova Awakening questline. 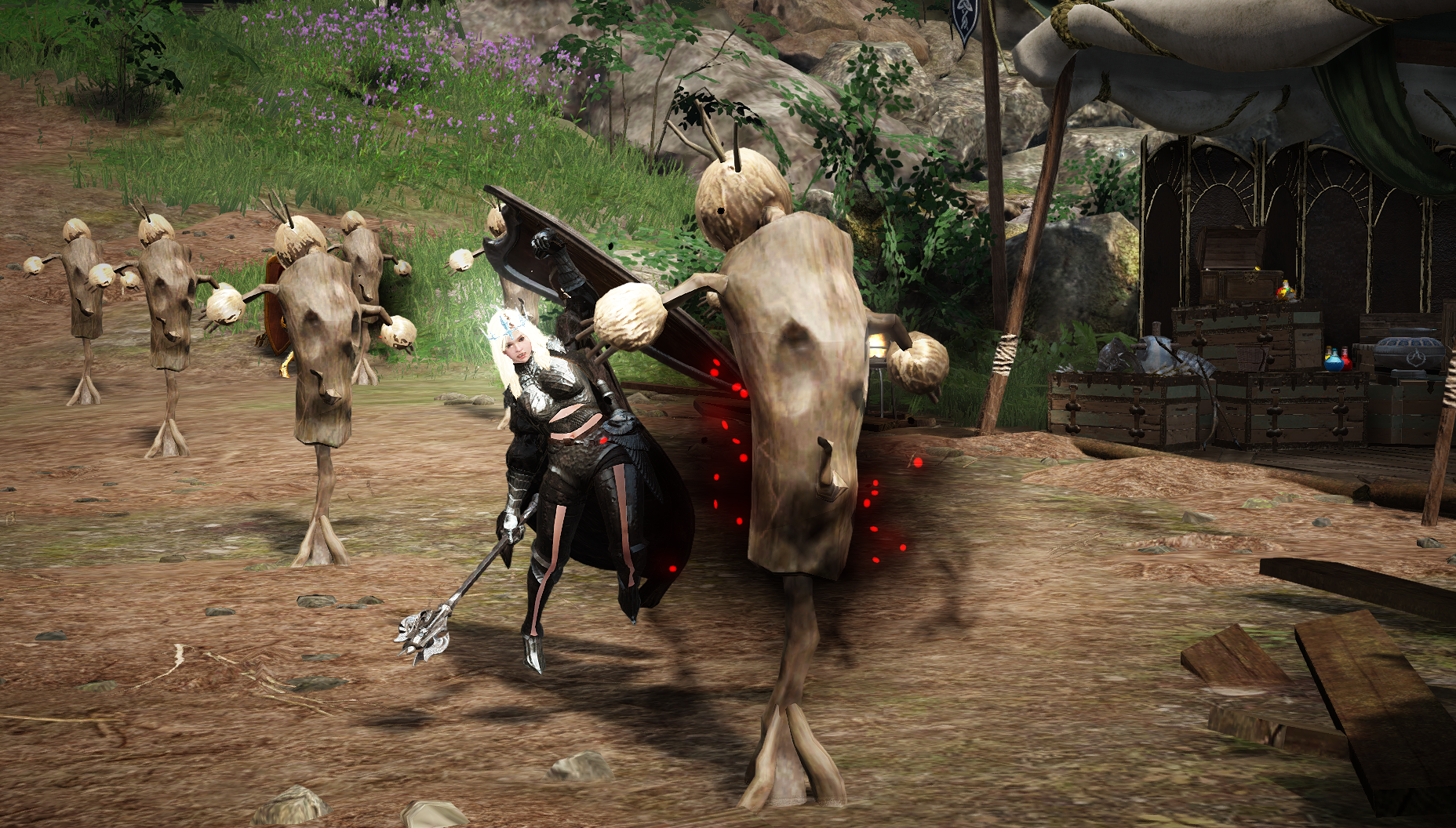 A lot of players who started before the implementation the season servers had to progress unguided. Now for every season, there will be a Season exclusive questline called Black Desert Season Pass. which you can use as a guide or checklist on things you need to do. You do not have to do them in order, but I personally followed the list. If you're a new or returning player and have no idea what you're supposed to do next, open your season questlne and go from there. You can also purchase the Black Spirit Pass for 380 pearls and get more rewards on top of the regular ones you get for completing each task. 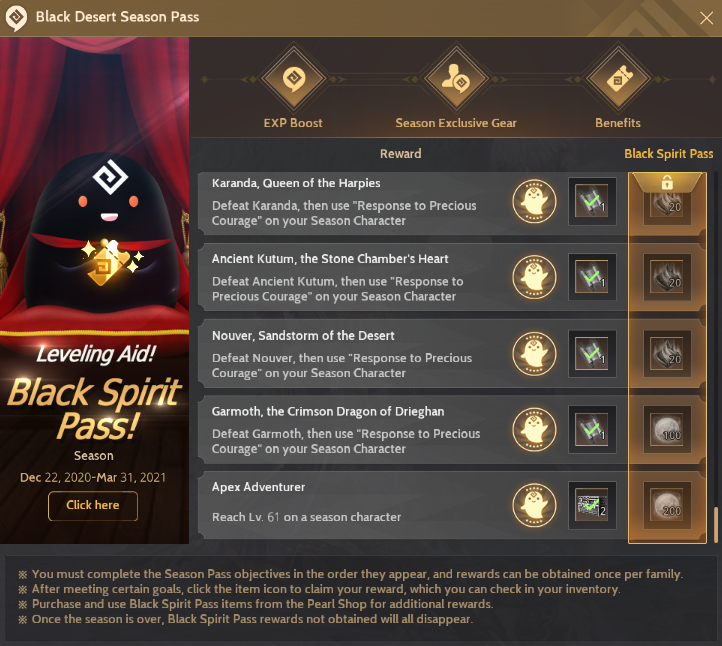 4. Do Your Main, Side, and Regional Quests

Related to 2 and 3, if you do all of these 3 types of quests at the same time, you'll actually save more time. Some people would rather quickly level their character and disregard other objectives, but comparing my experience back in the Summer Season VS Winter Season (now), you'll waste time going back to different areas either to complete the side and regional quests or to grind for enhancement materials. If you do all 3 at the same time, it will take longer to finish everything per location true, but you'll also avoid hours of mindless grinding, with exception to complete sections of the Season quest or the 250 and 500 you have to kill for regional quest, which grants Combat experience or enhancement materials. 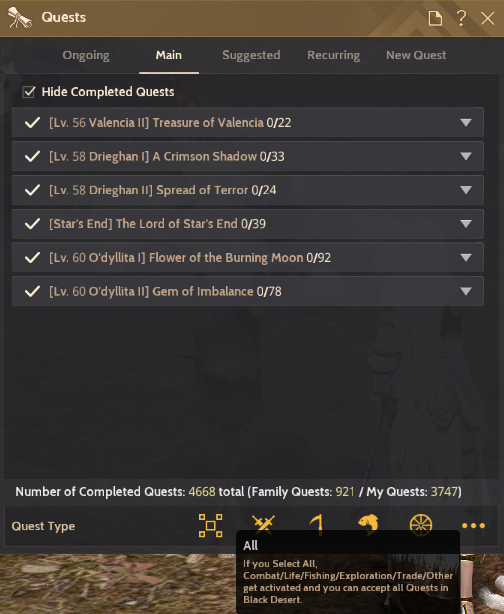 When playing with a Season character, you will not be able to equip gear from your main, or anything you can buy from the Central Market, giving everyone in the season servers a fair chance (non season characters cannot enter Season servers, or wear season gear). You can only equip Main quest reward gears, existing players can opt to equip Main quest reward gears from other characters in their family, newer players can experience the Naru gear, enhanced to PEN can be exchanged to PRI Tuvala. Based on experience, by doing No. 4 above, I was able to skip Naru and go straight to Tuvala, all enhanced to PEN, except for the belt which is still at TET. By the end of the season, you will be given a coupon per slot of gear, to exchange it to normal gear you can use outside of the season servers, by all members of your family. 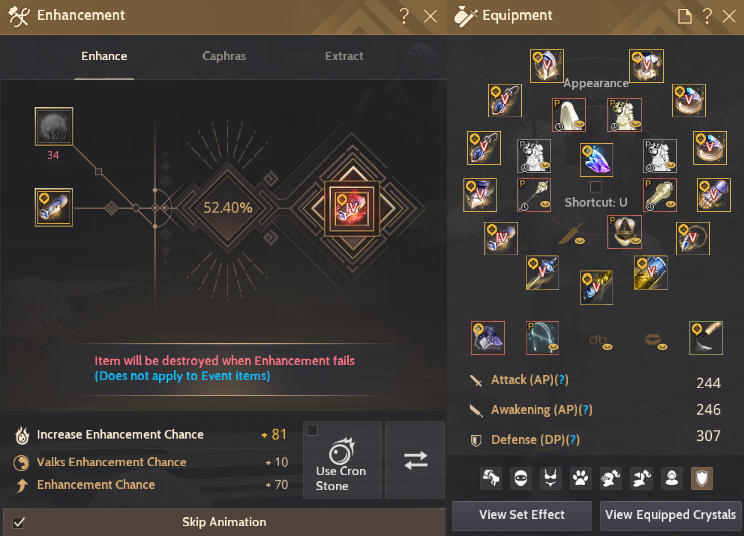 Thanks for the info.

I play Nova for the rapier xD Anyway, thanks for your info :D

Nice list, nice to see what fellow adventurers are up to

I play Nova for the rapier xD Anyway, thanks for your info :D

I play Nova for the Sephia hair! And partly because she gives me that DK feel.

Nice list, nice to see what fellow adventurers are up to

Thank you MYK and Melvin.

Thank you Beast! More of this in the coming weeks.