As someone who dislikes grinding, I avoid it like the plague. I just personally find that it takes the fun out of the game to mindlessly grind monsters, keeping myself awake. Whenever I asked other adventurers how they're able to grind for hours, the common denominator is they find something else to do, to not get bored, like watching a movie or series on the side, and for me, that's just no way to play the game. So Instead I focus on the Main Quest.

By doing this, I learn more about the Black Desert world by following my character's story within the world, add the fact that Nova has some storylines and dialogues unique to her, so that's added lore.

Some benefits of doing Main Quests are:

a. Gear usable by Season Characters - Season characters cannot use gear from your non-season characters, and anything you can buy from the Central Market. Until you graduate, you can only use quest reward gear, Naru and Tuvala gears.

c. Knowledge (First time completion) - When doing quests for the first time, they give you knowledge if applicable. Also, when doing Crossroad quests (select from 2 or 3 options), you can gain the knowledge from the option you have not chosen in the past.

d. Game Direction - Some players feel lost as to what to do next in the game. By doing your Main Quest, the game will give you direction as to where you need to be, and how strong you should be by then.

e. Enhancement Materials - The first time I played in the Season server was back to the very first one, Summer Season. Back then I played a Lahn and had to grind at least 1 hour every day to get enhancement materials. Main Quests rewards you with the same materials, along with some regional quests, you should have enough to get a full PEN Tuvala set.

This comes in at 2nd because as much as we want to play all day, every day, we still have a life. During those time we can't really focus on the Main Quest, the dummy training comes in handy. I normally do this while working irl, or while sleeping. The only downside to dummy training is it doesn't level you up. Dummy training increases your Combat and Skill Experience, but once you hit 99.99, it doesn't go over and you have to kill a monster or two, or in my case do a part of the Main Quest to level, before I can go back to dummy training.

During the early weeks of the start of the Season Servers, there will normally be a sale on these on the Pearl Shop for 50% off, and will have an increased exp gain through dummy training event.

Perhaps the fastest way to level, yet the least advisable especially for new players. When you are power leveled, a stronger player would normally take you to a high level area, and you can level from 1 to 61 within hours. The downside to this is you do not learn how to play your character right away, you also get less skill points and less to no loot. Power leveling is advisable if this is your 2nd or alternate character, and you just want to get the level-up rewards.

I normally incorportate this in my leveling routine when I can find guildies who are going to grind in high level areas, mostly in Mirumok. Also, when I haven't played for a while and the deadline for the level-up rewards is coming up.

Pros: Fastest way to level.
Cons: Everything else.

Particularly when leveling from 60 to 61 and with the Chenga-Sherekhan Tome of Wisdom. This tome gives you a +30% increase in Combat exp gained through questing. This Tome can be obtained by doing the questline, and cannot be retrieved once deleted, unlike the normal Adventurer's Tome which you can get from the Black Spirit in case you lose/delete it.

Once I have the tome, I start doing side quests from Stars End area - Brelin Farm, working my way down on that side of the map until Tooth Fairy cabin, avoiding quests that require me to kill anything in the Star's End area. Based on experience, I normally hit 61 by questing in Brelin Farm > Outpost Supply Port > Calpheon Northwestern Outpost > Acher Guard Post.

Here is a detailed guide by Supporter Veonya.

The most grinding you will ever do if you avoid grinding, but at max 750 kills per area, it honestly doesn't feel like grinding at all. I do the regional quests along with the Main Quest. For example I am in Mediah Main Quest line, where it will normally ask me to kill monsters from Abandoned Iron Mine, Wandering Rogue Den and Manes Hideout. While I'm doing the part of the Main Quest that requires me to kill in these areas, I'm also completing the regional quests. The good thing about this is you do not have to get these quests manually, the kills automatically count when you're in the area, regardless if you see the quest counter on the upper right hand corner (near the mini map). My indicator is the QUEST tag on top of the monster's head.

First you will need to kill 250, rewards may vary per area, either you get enhancement materials or Combat experience. After killing 250, you will get the next level which is to kill 500 and the rewards here are enhancement materials. Once you can no longer see the QUEST tag on top of the monsters head, you can travel to the node manager of that area, where the quest counter will appear when you enter the vicinity, and you can click on Complete to get the reward.

Here is a regional quest guide by Supporter Freyara.

Additional Tip: Always have Food, Scroll, and Draugt Buffs whenever you can. Particulary when you are killing monsters and dummy training. I personally turn them on during these as when doing Main and Side quests, it requires you to move around a lot and it's not very efficient to have them on. The food buff can be up at all times as this is cheap (oasis), while the scroll and draught can be popped before you're about to kill monsters/dummy traing. Below I list the ones I commonly use: 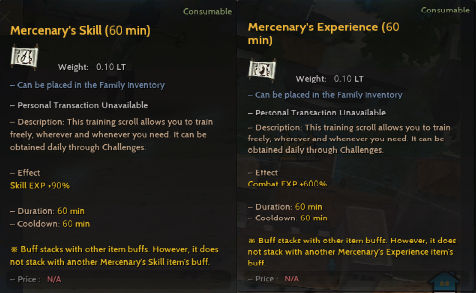 b. Combat and Skill Exp 530% Scroll (60 min) - The title says it all. Normally rewarded from level-up events, other events and daily log in rewards. There is also a 300% of this instead of 530% which does not stack with this item. 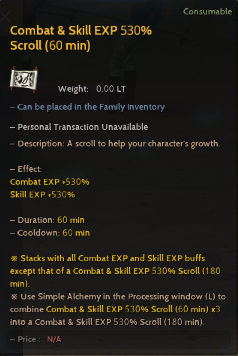 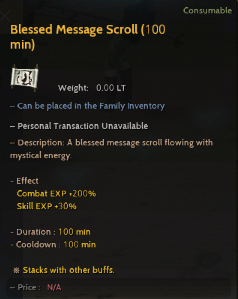 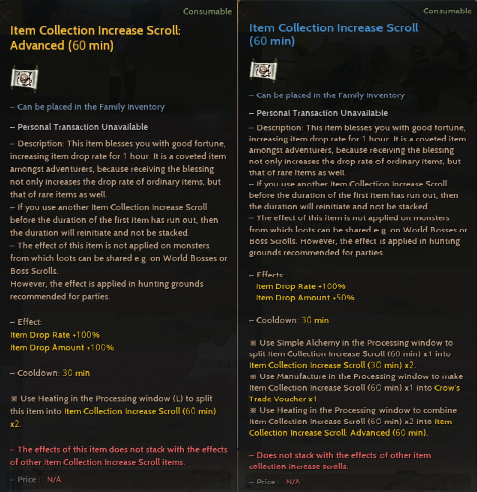 a. [Oasis] Simple Cron Meal - Bought from Oasis NPC. This is also available in the regular and Event variants. But Oasis makes more sense since it's cheaper, you can save the others when they decide to remove Oasis. 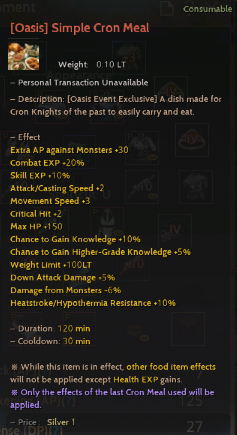 a. Beast Draught - There is a 60 min variant of this Draught, although I think I'm already out of it (I couldn't find it). Normally rewarded from events, but can be crafted from Alchemy or bought from Central Market. 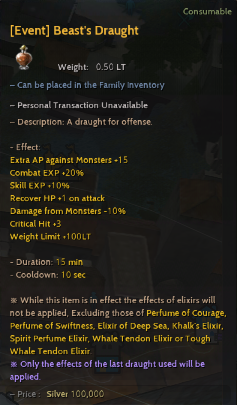 Hope this was helpful. Share your own leveling experience, thoughts, comments and questions below.

Thank you all. I know my method seems lazy, but this is as much time I can devote to leveling a new character. So I guess you can call sau these are tips for busy people too.