I've only played in 2 seasons, back in the very first Summer Season, and second during the Winter Season. My observation, when you enhance later in the season, lets say after early graduation is announced, it becomes harder to enhance the Tuvala gear. Unfortunately I do not have solid data for this, just a common denominator I noticed.

So to avoid rushing, I make sure I enhance my Tuvala gear the earliest possible time, which is normally in between doing Main Quests, and leveling to 61.

Before we start enhancing, we will need the following gear and enhancement materials and where to get them.

NOTE: Finishing parts of the MQ and Regional Quest reward you with either a clean or enhanced Tuvala gear/accessory, but for the purposes of this guide, we will not include those.

Advice of Valks & Valks Cry
From previous events; level-up events, ingame events and log-in rewards. I guess this part is what made my enhancing easier, as I never had to build failstacks (FS). If you do not have these or you'd rather build FS, you can skip this requirement. 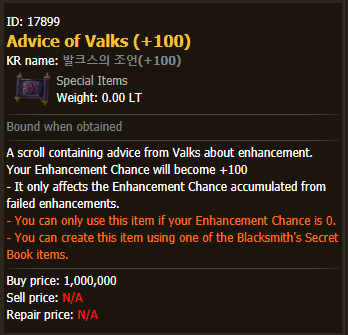 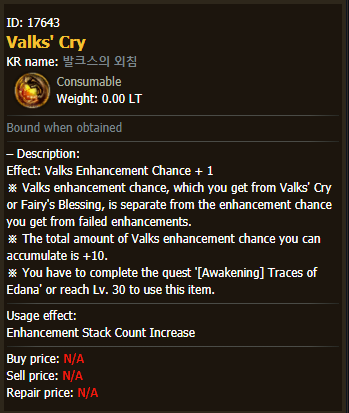 Time Filled Black Stone
Exchange for Tuvala weapons and armor from the Blacksmith NPC. You can get from Main Quest rewards, drop from monsters in Season server, regional quests, weekly quests. 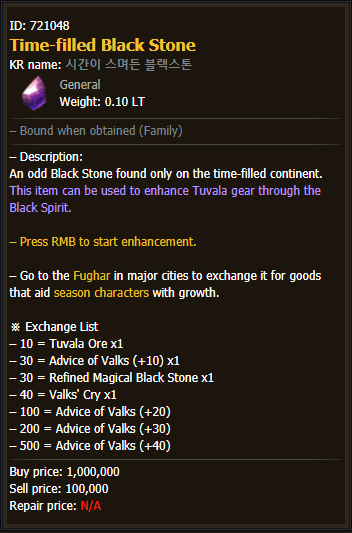 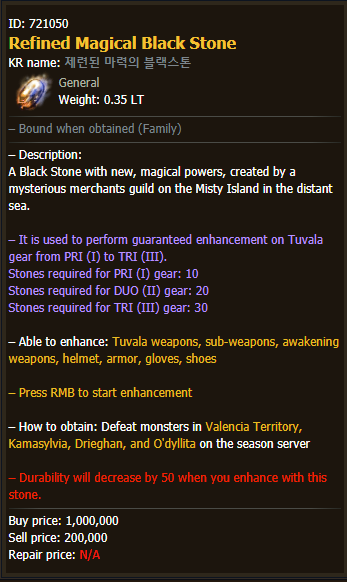 Tuvala Ore
Exchange 1 for Tuvala Gear or 5 for Tuvala Accessories from Blacksmith NPC. You can get from Main Quest rewards, drop from monsters in Season server, regional quests, weekly quests. 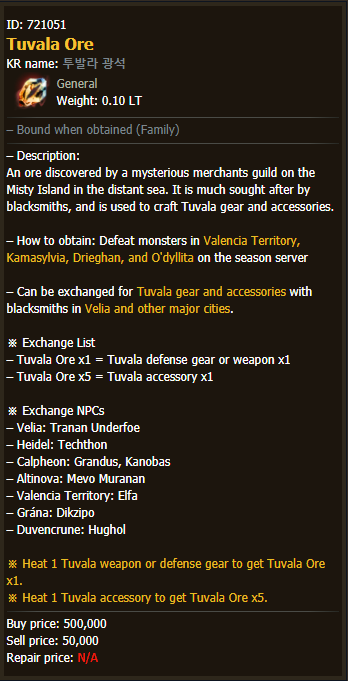 OPTIONAL: Cron Stones
I've saved up a lot from previous events. I only use sparingly, sometimes when enhancing Weapon or Armor from TET to PEN. I do not use it to enhance accessories.

How Long Did it Take?

So roughly 3 to 4 weeks, mostly playing on weekends.

NOTE II: I was enhancing in between doing MQs, Regional Quests and Weekly Quests, but only got full PEN after 3 to 4 weeks. I also stopped all other BDO activities, even on weekdays I'd do small sections of the Main Quests for 10 to 15 mins, total max 1 to 2 hours per day on a weekday.

Tuvala Accessories (destroyed on enhancement fail)
Same as the above. Except this starts at PRI and I never use Crons from TET to PEN even if it fails. Tuvala Ore is easy to acquire, so I can exchange it for accessories multiple times.

Reminder that enhancing is RNG and all of the above are my base or starter failstack. If it fails 1 time, I add the max allowed failstacks for Valks Cry per enhancement level. Also, when I fail to enhance PEN 2x in a row for armor and weapon, I start using Cron stones.

I'm scared of enhancing boss gears so I almost always buy the enhanced ones from CM. Also, if I fail like more than 3x in a row, I give it a rest and try again another day.