Hello BDO Sea community, this will be my first time writing a guide about Guardian, I would appreciate any feedback regarding my guide since there might be a bunch of things I overlooked.

Guardian Awakening is a decent choice when it comes to PVE. She has good pack to pack mobility, decent damage, low cooldown on damaging abilities, good pulling abilities, and easy to pick up.

These are the list of the tiers of the skill add-ons and the tier levels of guardian's abilities.

This are the list of skill add-ons I use and my reasoning for using them. 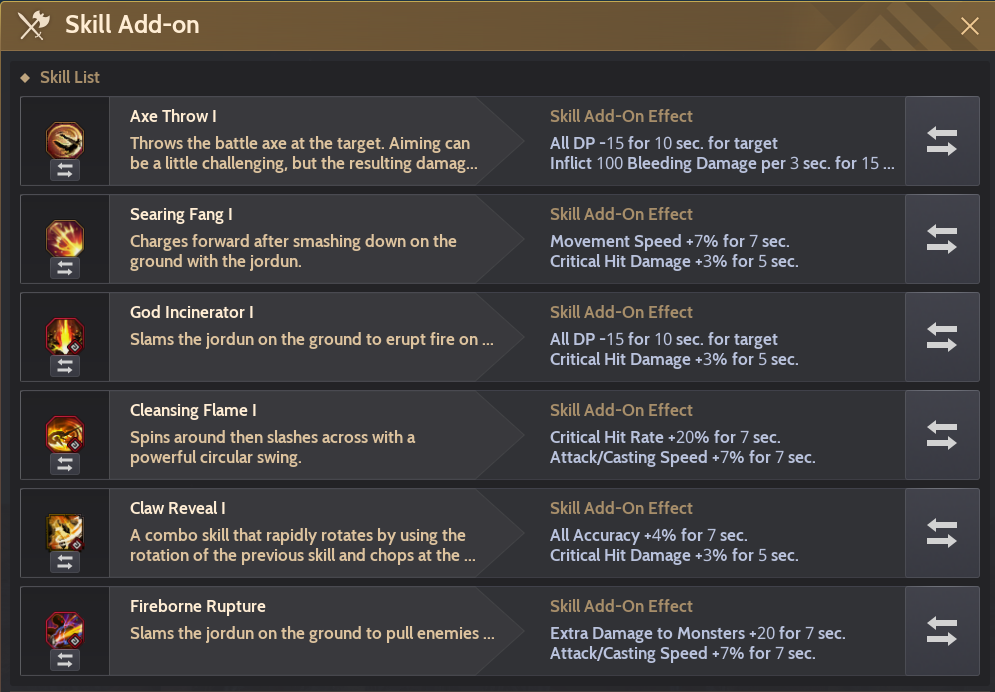 Axe Throw (Tier 2) is a niche add-on for me. The only time I have ever used this add-on is when I grind Star's End to stagger mobs, but most of the time you won't need this add-on.

I put movement and critical hit damage add-ons on Searing Fang (Tier 2) since this will be the last ability I use in my combo. Searing Fang is one of Guardian's abilities that deal devastating damage. I use this as a finisher for mob packs along with it's flow. Since this is the last ability I use for a mob pack, the critical hit will help in ensuring that you deal the final blow and the movement speed add-on will help in moving from pack to pack.

God Incinerator (Tier 2) is used in the middle of the combo. The huge AOE and the number of times the ability hits will help ensure in applying a DP debuff to mobs. The Critical hit damage will also help in clearing mobs faster

Cleansing Flame (Tier 2) is one of Guardian's abilities that doesn't have a critical hit rate modifier. At this point you will probably have 10 stacks on

Fireborne Rupture (Tier 2) is also a part of your pre-combo preparation abilities. Using this ability will give you +20 AP bonus, adding Monster AP and attack speed will help you combo into your other skills faster and will give you more damage against mobs.