What if I tell you that you can get c6 urugons for basically half the price?

Hello! I came across this path to gearing up recently, and I tihnk the attention it's been gaining isn't appropriate to how good it actually is. I'm talking about Blackstar Armor pieces.

A majority of our community overlook these pieces of armor because of how it was released(Very Underwhelming). But with the introduction of Haduum and the blackstar upgrades, it opens a new path on which you can gear up in BDO. I am not saying that this is an end game build, but if you are doing anything large scale related i.e. GvGs, Node wars, Siege, then you'll notice that gear really has a huge role into how you play, and how you fair against people.

Of course I wouldnt suggest going for this piece of junk

because you should be aiming for fallen god anyway, and going for a pen blackstar armor would be alot more tedious than going for a PEN boss and caphrasing it to lvl 10.

The real miracle comes from the other pieces, the shoes, gloves, and helm. They all generally work the same way so I'll explain why below.

Lets go over some Pros and Cons

You'd probably look at this entry and scoff, but you'd be surprised. To give you an example, the cost of PEN Urugons currently in the market is

and the cost of TET blackstar shoes is currently:

These two items generally have the same stats but you're spending easily over 10bil for the Urugons. If this was posted before haduum, normally I'd say that you're a nutjob if you'd consider getting Blackstar shoes over Urugons, but not now. The Blackstar upgrade generally costs you about 4bil in matts and boss auras, and it brings your blackstar shoes(or any other blackstar armor piece) to the same stats you'd get from CAPHRAS LEVEL 6 Urugons +the monster DR. Caphras 6 Urugons would cost you 7.27bil in caphras. The caphras market is already horrendous as it is.

To compare both: You're spending 39.67b to c6 your Urugons compared to spending 24.2bil for obsidian tet blackstar shoes. 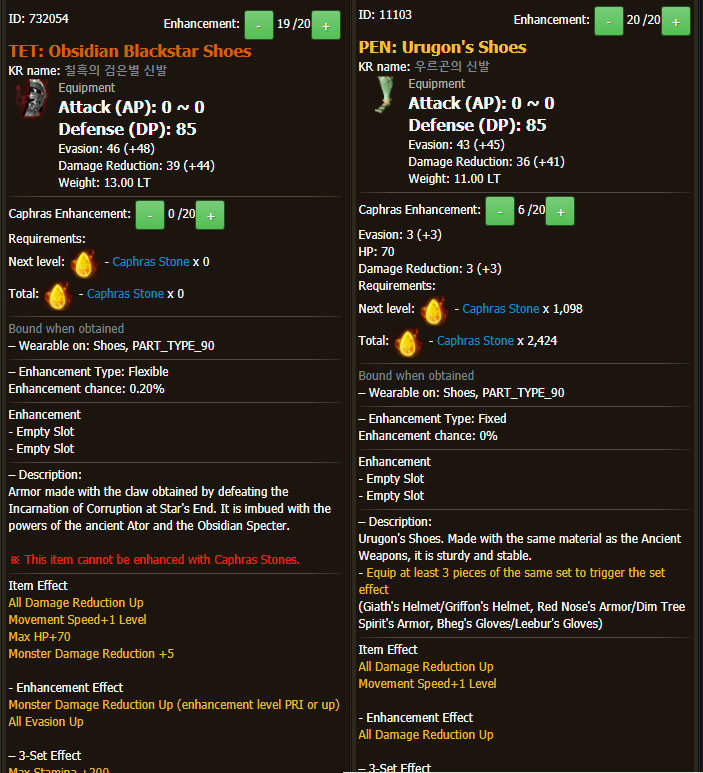 You can refer to the above entry, it has an additional DR against monsters which will for sure add up when you have 2 to 3 pieces. You're looking at potentially 10-15 monster DR not counting what you'd get from Fallen God Armor.

3. You can spend your caphras somewhere else.

Caphras are fucking 3mil and constant PO atm, I'm sure you can use the money you save from the blackstar armor to invest in other gear upgrades.

Dead ends are generally bad, but if i were to be honest with you, unless you are building to be really really tanky, do you really need that much DP? Aside from that, you can always just decide to sell your blackstar armor pieece after you've decided, that its probably time to go to caphras 9 or above for your armors.

To put an end to this guide, I'd like to just say that if you're still skeptical, you probably don't get the point of this guide. If you are someone who is catching up or behind the average gear for nodewar/siege players then you'd best believe that you aren't gonna catch up too fast unless you grind like a maniac. Even then, the people on top are probably even grinding more than you are. When you're someone who needs to catch up to people who are more geared than you, then the answer is simple. You start taking shortcuts. There isn't much of a flaw to this shortcut, at the moment, unless you are gearing up a class that relies on your DP to survive and do well, then it is much much better to go for these armor pieces due to the fact that it enables you to go for your pen accessories faster, it enables you to caphras your mainhand, offhand, other armor pieces, whatever suits your situation, and more importantly it enables you to utilize DP and survivability that people who spend 10s to the 40s of billions more than you did. Which doesn't seem that large, but to put into perspective, if youre grinding 200mil an hour, 30bil is 150 hours, thats 150 LOOT SCROLLS. Put that in your head, 30bil which is potentially 10,000 caphras which is just about 1k caphras shy off a full caphras level 13 armor piece just gone, just for the potential to spend even more money on caphras. Just tell me how on earth would you catch up to the siege players if you slowly caphras up all your armors? Anyway, thats my take, if you feel I'm wrong, thats totally acceptable, I'm aware that this guide isn't meant for every class, every playstyle and every person. I hope I opened your eyes to another path to take though. o/

~If you'd like to have a discussion about it then feel free to message me in-game Family Name: "Oalkie". UwU bai bai

Yes, I have been meaning to make a post about this topic as well. Blackstar Armors are the most underrated items as of now.

As a Lifeskiller who occasionally does PvE content, is it advisable to get Blackstar armors rather than boss armors? Is it cheaper overall with same performance? Thanks.

As a Lifeskiller who occasionally does PvE content, is it advisable to get Blackstar armors rather than boss armors? Is it cheaper overall with same performance? Thanks.

It depends on your class, how far you want to commit to your combat gear, and how you want to use your combat gear. There are a lot of differences between classes, some prefer evasion, some DR, some have a better time stacking defensive stats, some don't. If you're willign to spend enough silver to go for your pens(or tet bs) then it definitely is cheaper for the same performance. But if you're keeping your armors at tri bs obsidian or not, you're most likely better with boss gear and caphrasing to lvl 4. Getting these bs armors to TET will enable you to grind the pre end game zones way easier. It'll allow you to have more survivability in even pvp. These armors are generally cheaper to hit compared to the current pen armor market listings and cheaper to upgrade to the c6 counterpart as mentioned in the main post.

So in short, if you can commit to going for tet BS, then yes it is advisable and cheaper at the moment. If not, then youre most likely better staying at c4 boss armors.