TL;DR Simplified MainQuest for Veteran Adventurers has very little downside if u don't mind leveling to 56 via grinding OR have a friend or guildmate to boost you to level 56, so do it if ur not targeting Rupulee's Journal (Quests Completed Logbook which maxes out at 30k Quests completed xD) and want to progress into Tuvala ASAP.

**After the 30th June Update: Players only need to complete [Special Growth] Fughar's Memorandum - Chapter 8 to exchange their PEN Naru Gear to PRI Tuvala. (Level 58 used to be limiting factor, now reduced to level 56.) Update: All req. have been removed and PEN Naru gear can be exchanged for PRI Tuvala with Fughar via Exchange option.

***After the 7th July Update: Changed the simplified quest from "acceptable once per family" to accepted by any season character. If you used Fughar's Timepiece, this is worth a reread xD Also changed the way the simplified questline begins. Instead of using "Fughar's Memorandum," you will now talk to the Black Spirit (/) to accept and complete these quests. As a result, the "Fughar's Memorandum" items have been removed.

So you started playing a Seasonal Character, and you're not sure whether picking this Simplified MainQuest is the way to go? This is the Guide for you~!!
Here, we'll discuss this Simplified MainQuest from 3 important aspects:
1. How do the rewards compare to the Normal Main Questline?
2. Are there any issues if I pick this over the Normal Main Questline?
3. Am I missing out on anything fun if I don't?

So if ur new, do ur MQ normally! >:v
You'll get the option to skip when you talk to Alustin during the Balenos MainQuest so Choose Wisely xD 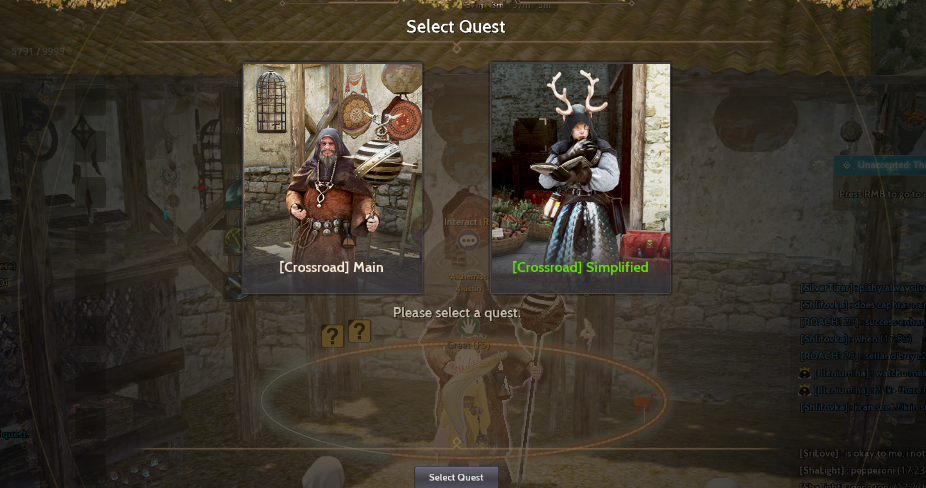 With that outta the way, let's jump into point 1~!
1. How do the rewards compare to the Normal Main Questline?
Inventory Slots, the most important aspect are the same amount >w<
MQ Outfits (Honourable (roll this 1st always), Shiel's/Cleia's/Elle) are ALL there too :D
Season Pass progression is also sped up significantly by just chatting with Black Spirit after you're done with certain chapters of Fughar's Memorandum.
Beginner Blackstones and Combat and Skill xp are hard to compare but should be slighty less than doing the full MQ to Mediah end. (You'll be stuck at a low level)

**With the 15th Sep Update, 1970 EXTRA beginner stones have been added! No more insufficiency issues.
Taking Simplified MQ will also instantly hand u the full Naru Gear at the start and gradually full set DUO Naru acce, all the way to Chapter 11 (Locked behind level 58).
***With the 7th July Update, - Increased the amount of Beginner Black Stone (Weapon/Armor) given as rewards for completing the simplified questline by double. This also applies to Adventurers that have already completed the simplified questlines. Also added Social Actions <3

2. Are there any issues if I pick this over the Normal Main Questline?
**All major bugs and problems have been fixed with the 30th June update!
***Major changes to Simplified MQ xD Hope my edits smooth out any inconsistencies!
Leveling to 56 should be your only issue. Try asking your guildmates or friends if you need help ^^

TL;DR No more bugs and problems~! If you do find any, make sure to report it~!

3. Am I missing out on anything fun if I don't?
The Quest isn't very fun at all. You spam R with Fughar and pass up on generic text on how you're an Seasoned Adventurer from a Prestigious Family. Then you spam R with Black Spirit doing Fughar's Memorandum once you're level 58 and you essentially completed the whole Simplified Questline xD

TL;DR No reason to feel like ur missing out if u decide to do MainQuest normally! ^^

Anyway, that's the Short Guide on whether you should do the new Simplified Questline :D
Poli's Video (With the 7th July Update a lot has changed so keep that in mind):
https://youtu.be/njVkHNi-O0E
Poli's Video is the best for guides if you're a new player, so make sure to Subscribe to his channel for the latest updates! (Also turn on subtitles :p)

Thanks for reading~!! o7

With the June 30th patch you'll have the option to recover it by Chatting with the Black Spirit >w<
Sorry for the late reply xD
Now with the 7th July patch there is no longer a Fughar's Memorandum :p