Overtime wizard awakening has been given continous small buffs that resulted in awakening being a very similar pve output to succession with less key input resulting in a more chill grind.

So here is a very small and fast guide to skill rotations and addon interactions for wizard awakening pve.

1. Awakening grind requires rotation of awakening skills only with pre awakening only adding self buffs and the Magic Lighthouse(red orb) for aggro holding.
2. The main advantage of awakening vs succession is the low cooldown Tier 3 addon on Chilling wave (13 seconds) compared to Prime Meteor (30 seconds). So our addon choice and skill rotation should take full advantage of this.
3. The actual flow of skills is very simple as follows :-

a) Prebuff >Pull/Aggro mobs (Chain lighting or just rmb mobs from range, chain lightning can stiffen them and make the pull slow).
b) Gather them in a tight pack, Red Orb (Magical Lighthouse / Hotbar input) immediately and magical evade so you back attack them.
c) Lava Field (E in awakening) on the pack.
d) Since I have my +30 monster AP addon on Chilling wave (Shift+LMB+RMB) along with 30% crit rate addon (awakening spells have low crit rate, this helps you dps more) , this is the first skill to use to proc both and do massive back attack dmg.
e) Hellfire (W+F ) > Magma Bomb (RMB while in hellfire) to proc -15 dp/ 7% Castspeed + 3% Backattack/3% Crit Damage addons, Into Cataclysm (Shift+RMB)
f) Aqua Jail (Shift +LMB) to proc -4% Evasion/ 4% Hit rate addons.
g) Chilling wave again to do massive damage and reset the addon procs.
h) Bollide (S+F)/Rabam Fireball(SHIFT+X or Hotbar)/MMA (Hotbar from awakening)/Lightning Spear (Hotbar from awakening) for filler damage.

4. Note that if the mobs can be crowd controlled and knockdowned like its possible in star's end then replace the backattack addon with down attack addon. In this case we want to use Cataclysm/Water Orb/Rabam Fireball to knockdown the mobs right after Chillingwave so mobs get KD. In this instance we replace the addons on Cataclysm with -15 DP/ Cast speed.
5. Depending on your grind speed and rate of BSR recovery try to use speed spell , Z absorb and awakening ebuff separately to spread the buffs over longer durations.
6. You want to lock your pet and not use it during grind as it will pull random mobs and disrupt proper pulls.
7. If you have 100% hit rate on the mobs you are grinding you can replace the -4% evasion and the 4% accuracy addons on Aquajail to something else. 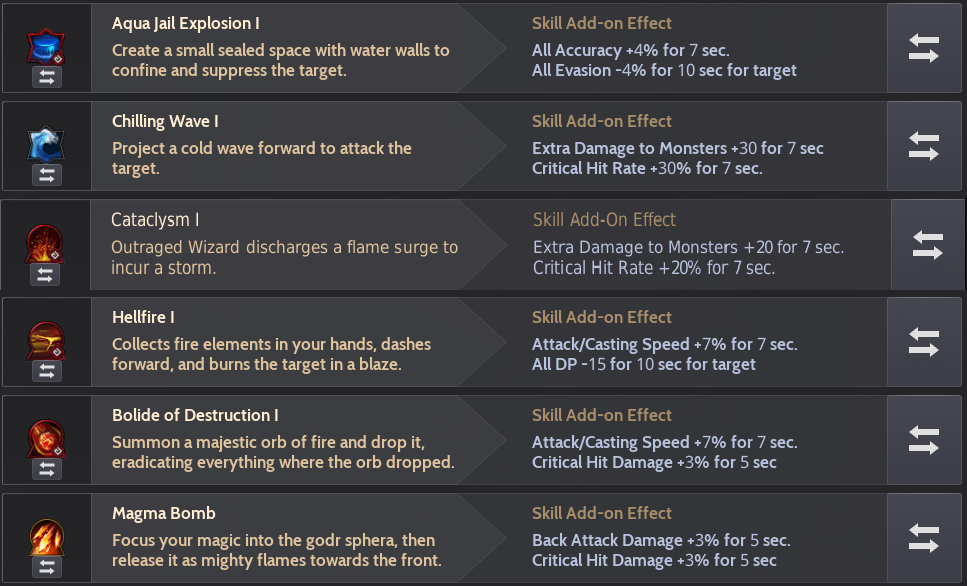