Ganii here bringing you tips and guides in choosing classes. This guide will focus on classes you can use that are beginner friendly,fun and suits your playstyle well.

Choosing the right and fun class for you is a very personal decision. Do you like complexity or simple? Speed or slow and heavy hitting? Good at Large scale pvp or 1v1 scenario classes.  Ultimately, you will end up playing the class you love and enjoy with along your progression in BDO.  In BDO 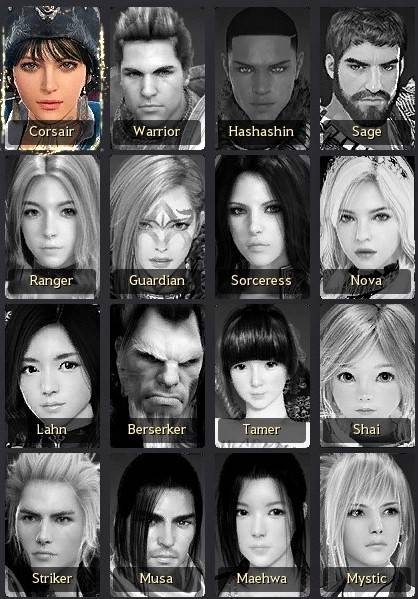 Trial characters in game allow you to try out a class which you would like to use in the BDO world. I personally find this option very useful because it gives you the chance to try classes while not worrying about level EXP and Skill EXP. I suggest you hook it up once in awhile and try out other characters, but keep in mind that you can only create 3 characters as of the moment.

Guardian - Definitely great for both grinding and Large scale PvP. She is also a very great option for new players since she has some of the easiest to execute combos in BDO, with massive damage outputs and good mobility.

Kunoichi - Easy to fall inlove with class but also very tough to master. She excels in 1v1's especially against slower class like Guardians. What she lacks is her PvE power and grinding speed. If you are up for the challenge give her a try.
Lahn - the most enjoyable classes in the game as of the moment. Recommended class for any beginners who are new to the game. They can glide long distances making them cover alot of ground in a short amount of time - As well as suprising enemies by appearing out of nowhere. Both her main and awakening weapon kits focuses on close-quarter combats. Her combos will have you feel like you are dancing with your enemies.
Maehwa - Highly mobile class with great burst damage. She's very fun to play, and employs quite balanced mechanics. Her single target is one of the highest damage in game so you need to isolate your opponents in PvP, and watch out for right openings before engaging.
Mystic - Offering a huge array of martial arts based combos, it's an easy pick up - but hard to master class.

Nova - giving the Paladin type of BDO roster class, wielding a massive shield and a deadly morningstar, or a sword/scythe in her awakened form. One of the classes with the most polished animations with one of the fastest movements and combo executions in game.
Ranger - a fast paced bow wielder class complemented by BDO's in-depth skill rotations and mechanics. Her awakening weapon is a melee sword which offers flexibility to her kit.
Shai - Best support in game, good in lifeskill since her default mastery level for selected Lifeskills is Professional 1
Sorceress  - very hard to master but very fun class, her kit solely focuses in close quarter combats. Great in picking off enemies with alot of safety engages and disengages.
Tamer - Accompanied by her trusty pet "Heilang" which she can control and stun her enemies, or even use it as a mount instead of a horse. Her defenses are very low so she relies on smart positioning, dodging and patience. With the right opening, she can unleash an endless stream of CC.
Valkyrie - The warrior female counterpart, but their playstyle differs more than any other male/female class pairs in BDO. Her movement is quite clunky. making her inefficient for fast PvE grinding but at the same time, her beefiness will make her shine in high-tier PvE areas.

Witch - plays a lot more than traditional MMOs, compared to the other fast-paced BDO es. Most of your abilities have large casting times, so being many steps ahead of your opponent is crucial in your rotation. You will get limited openings to strike, but landing your spells will prove devastating for your enemies. Your Protective Ability (PA) is an essential Node War buff, and you can easily excel in large scale PvP – as long as you manage to keep out of your enemies’ focus. 1v1s will be tougher, but also heavily reliant on your skill and game knowledge.

Archer - arguably more satisfying to play than Ranger, since the skill-cap is lower, and the range bigger! Kiting will be your bread and butter in both PvE & PvP, while you can unleash a huge amount of damage from afar, as well as Crowd Control abilities. Grinding with Archer is a breeze, and with smart positioning, you can undertake higher tier areas without many drawbacks. Similarly, you can make a big difference in Node Wars – as long as you stay out of the line of fire.

Berserker - one of the most unique es in BDO, both for his terrible aesthetics, and his ultra-fun fighting style. Your job is to disrupt the battlefield by stomping your enemies, or even taking them for aerial walks! Your burst damage will be more than enough to finish them off, unless you get “caught in the act” due to your long animations.

Hashashin -  is a fast-paced… assassin, that feels like a more offensive – and less strategic – version of Ninja, as well as a unique take on the Sorceress . He definitely reminds of the “Rogue” archetype from other MMOs, but what he lacks in stealth, he makes up with his mobility and surprise attacks. You employ a good arsenal of skills for clearing through PvE waves fast, and can more than stand your ground 1v1.

Musa - My personal favorite. a natural-born hunter, employing a huge array of dashes and gap-closers. With smart resource management, Musa can literally never stop moving and slaying, making him an amazing pick for grinding, and a fun choice for 1v1 PvP.

Ninja -  high-skill / high-reward , like his female counterpart Kunoichi. The ability to use Stealth and move undetected, opens up a new type of gameplay for BDO, since you will pick your fights more than they pick you. Your potential rises greatly with Skill Points, Gear and actual Skill, so Ninja’s progression is definitely fulfilling. Not the best choice for PvE Grinding (not that you will have any problems doing it), Ninja is the King of 1v1 PvP. Large scale PvP will be tougher to manage, but it’s also your chance to prove who is the true leader on the battlefield

Sage - the only caster-type in BDO except for the Witch & Wizard, and through time & space manipulation he can easily reposition himself during combat, while raining terror to his enemies from afar. He definitely wields the flashiest and most colorful spell animations, bringing an essential element that has been missing from the world’s magic! With strong CC and positioning he’s definitely a strong PvP force on his own, offering great flexibility in either 1v1 or group PvP situations.

Striker - the best choice for those that prefer a tankier , able to sustain a ton of damage, and stay the longest in fights. He is really versatile in the roles he can take during a Node War, making it hard to go wrong with him. Arguably not the best at grinding, but your 1v1 power will be more than enough to keep you interested in contested spots! Striker truly shines in small-scale PvP scenarios, being an one-man army no one really wants to go up against.

Warrior -  is the male counterpart of Valkyrie, and he is much more offensive than her. He’s definitely the most unique “Warrior” you will find in any MMORPG, so prepare to be positively surprised! Few es can take you on a 1v1, as your self-sustain is powerful. You won’t be the quickest at grinding low-tier zones, but your efficiency in high-tier areas will more than make up for it. An essential tool for small or large scale PvP, having a good Warrior in the team can prove game-changing.

Wizard - is more offensive than the Witch, having to get inse the heat of the battle in order to unleash his devastating AoE spells, then get out as quickly as possible! His presence on large scale PvP is essential, offering huge burst damage, as well as strong supporting abilities.

The Wizard’s long casting times make for strategic gameplay, that traditional MMO fans will certainly appreciate. You won’t have any issues grinding low or high tier areas, but you should be extra careful about enemies, since if you’re caught by surprise in a 1v1, you have very low chances of surviving – let alone dealing damage.

After you're done creating your desired class, finished questlines etc. Now is the time for you to go and grind for EXP and SP farming. Remember that this part is very important for your class because some skills give Health EXP, Stamina EXP and Energy EXP. Leveling also gives you rewards in certain levels (I.E 61 ,62..) which helps you gain more AP and DP for your class damage.

Bdo also does Combat and Skill % events for all servers in some occasions. If you are new to the game you can login and join Olvia servers, that way you can progress with exp and sp faster than normal servers.

That's it for this guide. Hope you guys enjoy whatever class you play and stick with. See you all in the world of BDO.
Thank you.