This guide is a continuation of my Previus Guide about archer:
1. Archer Guide #1 - PVP Skills, Crystal Setup
🏹 ADDONS

On the 28th Oct Update, we got a massive reworking on all skills addons.

Though the skill list which you can put addon itself didn't changes, the addons you can put on each of these skills has been changed, you can put any addons on any skills unlike before. Also, each skills now classified into tiers ranging from tier 1 ~ tier 3. The higher the tier is, the greater the effect For more details, you can see the picture below. 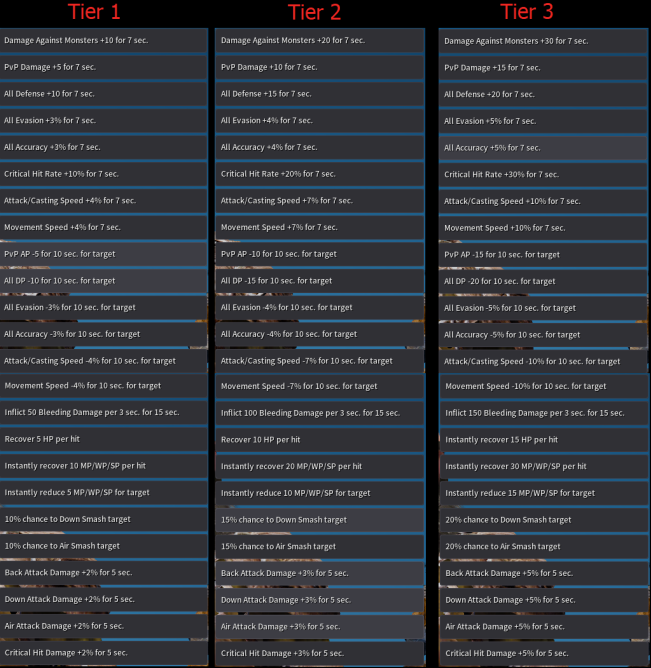 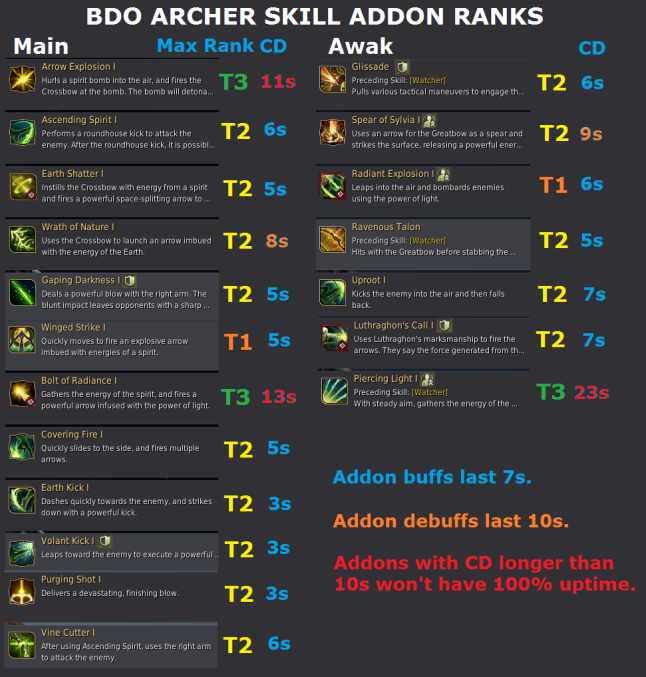 Before we continue further, I'll need to inform you that all of this is purely based on my own opinion / experience and by no means correct for every situation. Addon choices also heavily depends on your playstyle , habits or skill preferences. For example, if you like melee playstyle, you might want spear of sylvia, gaping darkness, and Radiant Explosion on your skill list. 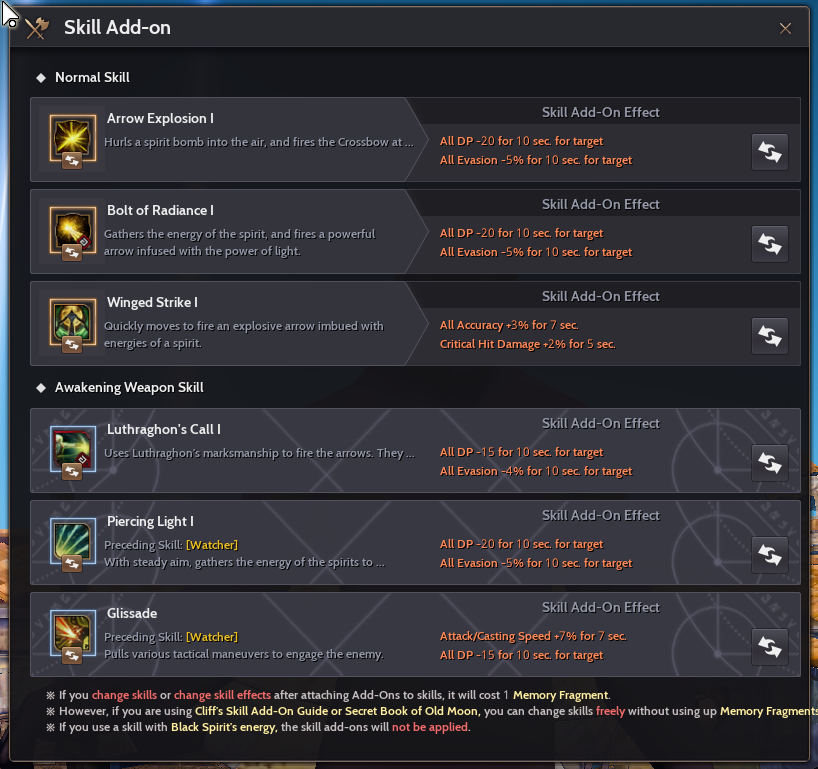 You probably wondering why most of them is DP and Evasion debuff, my reasoning is, in my opinion Archer one of the easiest class in the game that can inflict debuff addons on multiple enemy from distance within low timeframe so I just want to take advantage of that fact. Of course this also works for self buff addons, meaning you can always keeps your buff up.

Q: So why take debuff and not self buff?
A: Simply because debuff will increase not only your damage, but also your overall team damage. This will also allow your teammates (especially the more hard hitter classes / players) take another self-buff addons such as crit rate+%, Crit damage+%, Accuracy+%, Pvp damage, etc.

Now we'll take a look at the reasoning behind each of my skill and addon choices. Although my skill choices before and after this addons update is actually still the same 6 skills because these skills is easiest hit from range.

Theres also this weird fact that DP and Evasion debuff goes through enemy blocks (like you hit glisade when enemy's blocking but they still got afflicted by the DP debuff), not sure if its bug or intentional since movement speed debuff and aspd/caspd does not apply debuff when it hits enemy's block.

I took this skill because It works both on pre-awakening and awakening form also due to how often archers use this skills. The reason I took buff addons instead of debuff is because this skills is a tier 1 skills, so since i have quite a lot of other debuffing skills and the fact that I rarely use this skills as opener, I use it as a self buff. Of course you can always put another debuff instead if you like to.

Wide area ranged skill that previously does nothing but decent-ish damage, now with debuff addons you can inflict Tier-3 debuffs on everyone in the area! Making them squishier for you or your teammates to finish the job.

Similar reason to Arrow explosion (despite smaller area but bigger damage), you can use this skill as a follow up after Arrow Explosion which will extend the debuff or use it individually after skills such as Piercing Cry. You can also try alternative addons such as Bleeding since this skills also have DoT Burn damage.

I took these because I used this skill a LOT as opening. This skill got a HUGE distance and pierce through multiple enemies, especially when you full charge it (with the recent updates the charging time has been halved!). Imagine before the fight even starts, your enemies already afflicated by DP and Evasion debuff!! This skill itself also got decent damage overall.

🔰 Piercing Light [Tier 3]
This skill is a skill that you should use everytime its off cooldown. If you full charge and hit somebody or hit the ground, it will deal a big area of explosion with good damage which will also Knockdown unprotected people. Now, in addition to that you can make them all squishier with a Tier-3 debuff!

Archers uses this skills very often as its a Front Guard with a Knockdown at its 3rd shot. A good skill for safely finishing a low health people or attempting a CC. In addition It got low cooldown of 6 Seconds and if you keep using it until the 3rd shot, this skill will be ready again in about 4 seconds, making this skill a very good choices for addons. I put attack speed buff on this skill because of that, also a 7% aspd buff will helps me using any other skills faster. Also, every hit of this skills will keep triggering the addons so the buff / debuff up time will be very consistent. You see an enemy group blocking in front of you? lets start with this skill (or Luthragon's Call) to apply a Dp debuff and makes yourself faster!

Addons for PVE also varies heavily depends on your skill rotation and skill you used, but the general idea is you would want the DP- , Monster AP+, ASPD/CASPD+%, any other damage increasing such as Crit Damage+% or Back Attack+%. Up for most of the time. Now below here's is the addon I used, do take note that this addons is what i used for those type of mobs that cannot get CC-ed most of time (Sycraia, Turos, maybe Starends also). 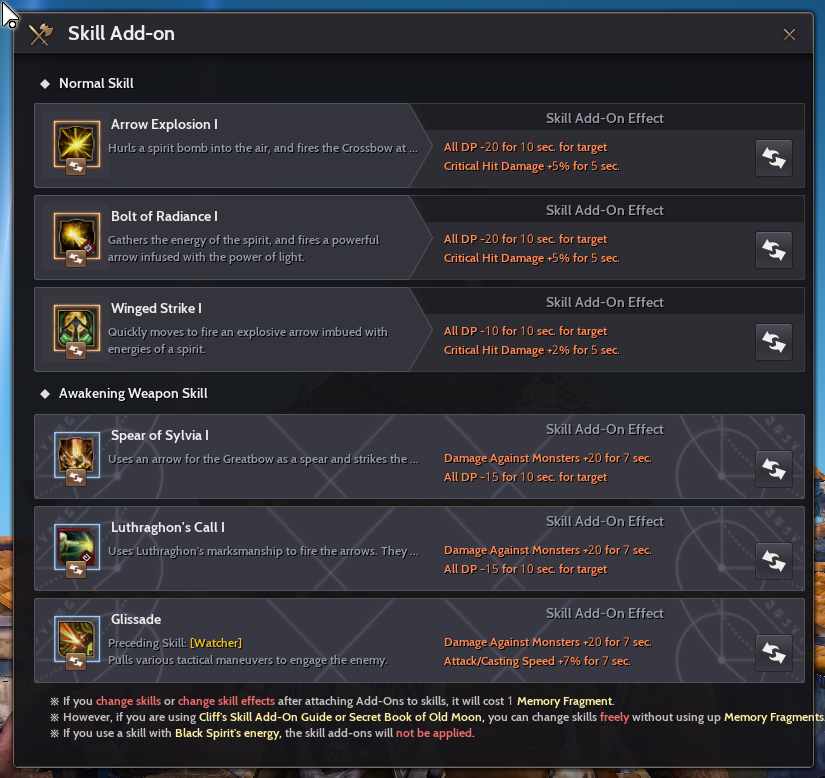 I used this skill to pull mobs so a initial DP- and Self buff will increase my initial damage.

Big area skills so it will easily gives the DP debuff on all the mobs. the crit damage+is just my preference of having other type of buffs since my Monster damage addons is all tier-2, I don't want to mess up the buffs uptime.

Mostly same reason as Arrow explosion, using it after arrow explosion will extend the buff but it can be used individually.

I choose this 2 skills mostly because of how my skill rotation goes. I usually dont use Luthragon Calls and Spear of Sylvia right after each other.

🔰 Glisade [Tier 2]
The reason I pick this skill is because everytime I used this skill I will follow it up with Full Bloom -> Uproot -> Luthragon calls, so I would like a buff before doing that. Debuff addons on this skills for PVE probably won't be good since this skills mostly only hit 1 or 2 enemy

Since this skill actually have innate DP- and often used as opening skill, you can gives it a DP- and Monster damage+ on it despite the lower Tier. It most probably won't be interfering with the buffs / Debuffs time since it will just be replaced wit higher tier buffs on the later skills

This is a Video example of me grinding in sycraia using this new addons:

AFTERWORD
This new addons update is very interesting, especially on larger scale battle. Imagine if each class in each platoon in siege have their own dedicated addons of debuffs. That would be very interesting. In addition to that, this also makes lower geared people can contribute more in wars by using debuff addons!

I will update this guide later on with other alternatives that other Archer uses but it might take a while since this update still new. Hopefully this guide can helps you in deciding your own Addons! (*・ω・)ﾉ

Great suggestion. Thanks, bro! You are the best!

Almost rerolled to archer after reading this then i remember they are ranged RATS. Great guide~

You are top10 as always!