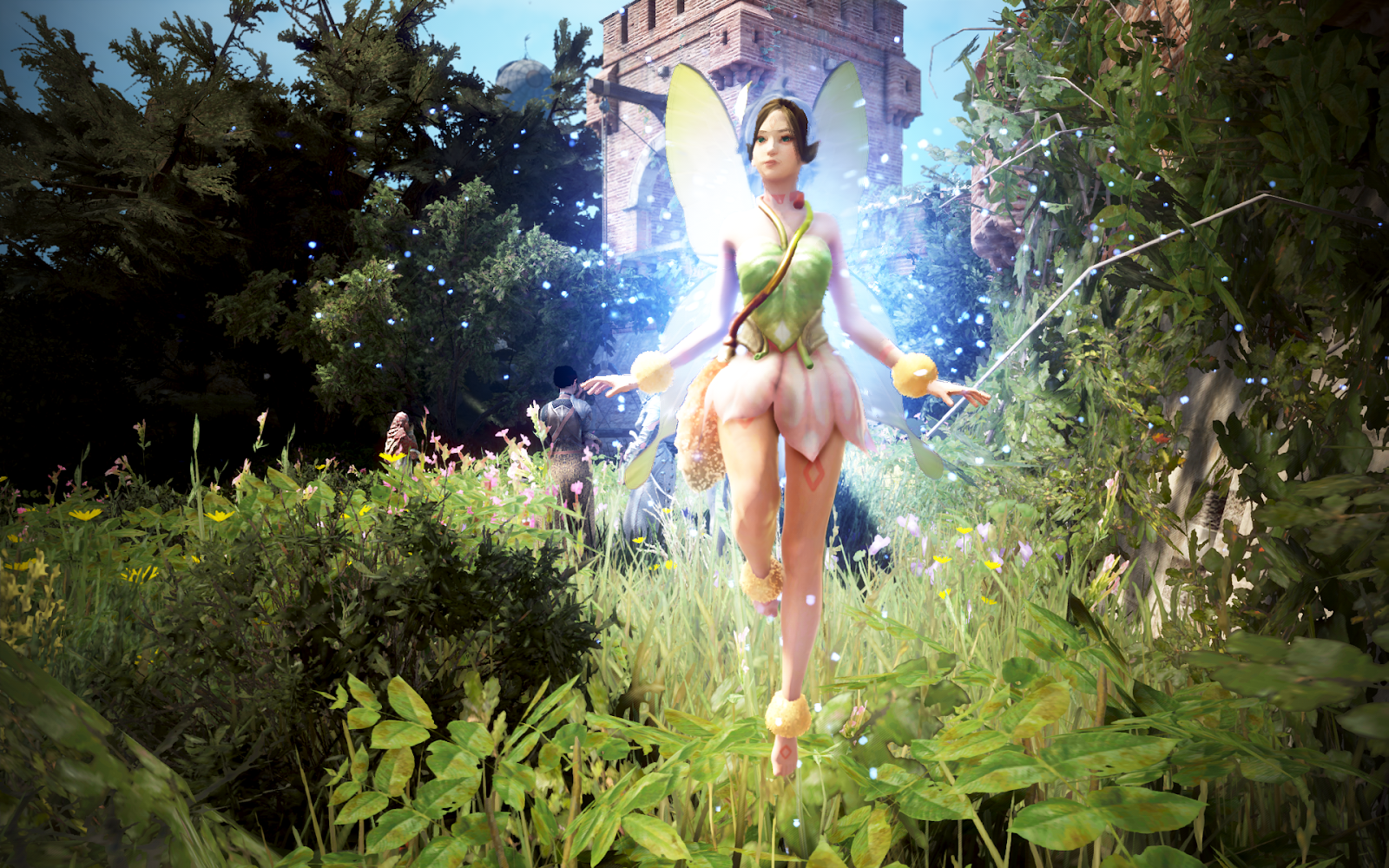 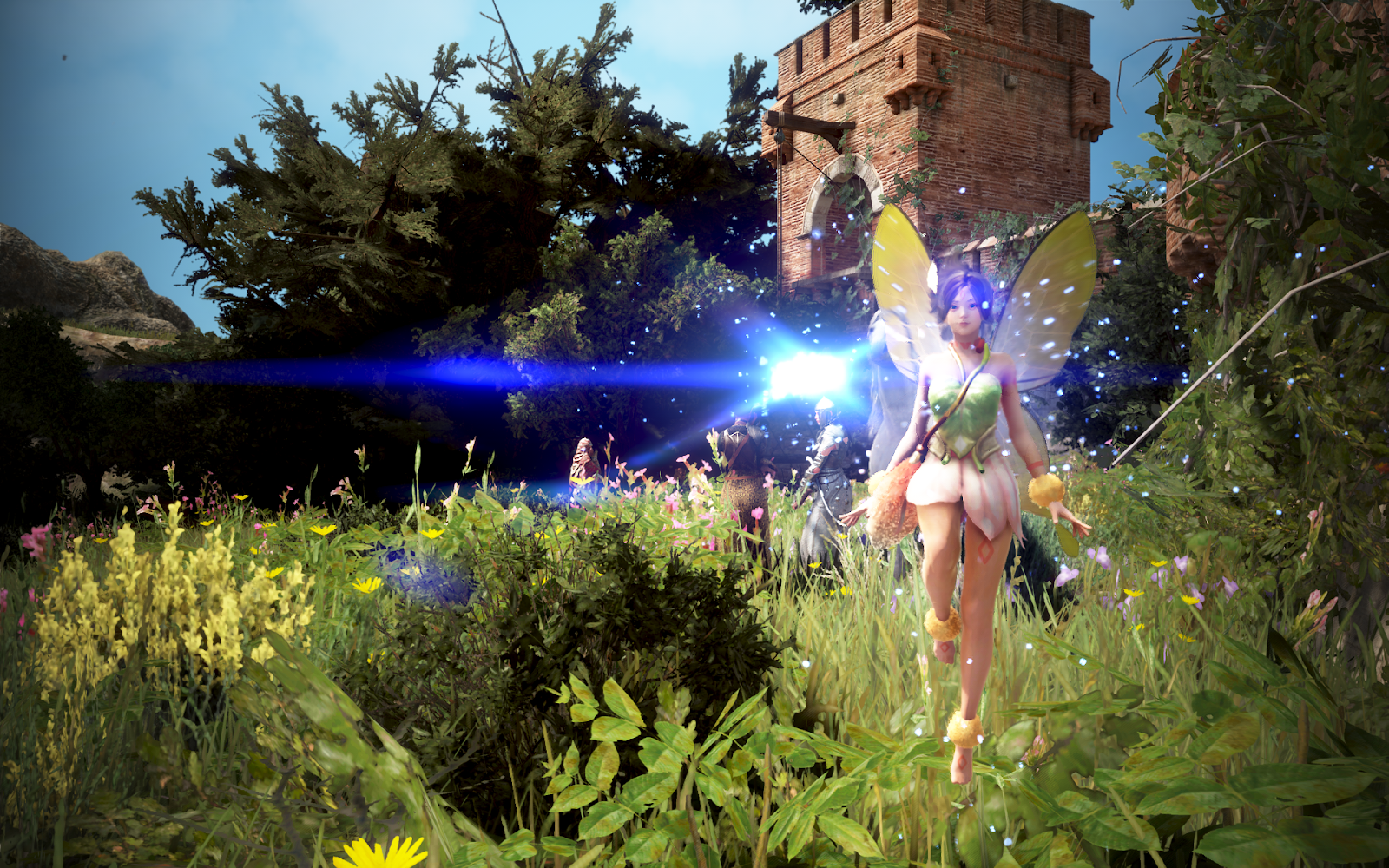 Fairy Laila has arrived in Black Desert!
What do these fairies look like? What roles will they play in our long journey?

Don’t miss out on your chance to learn how to meet these fairies, and their abilities in this GM Note!

- How do I get a Fairy?
Use the Sealed Fairy Wings to acquire Fairy Laila.

Then, how do you obtain the Sealed Fairy Wings? You need to complete the Black Spirit quest that starts with Fairy Queen Theiah.

※ For the quest above, you must be at least level 52, and have completed all the Calpheon main quests to accept this Black Spirit quest.

As you progress, you will reach Kamasylve Temple in Mediah. From there, once you’ve completed all the objectives, Fairy Queen Theiah will offer a repeatable quest which will give you additional Sealed Fairy Wings. 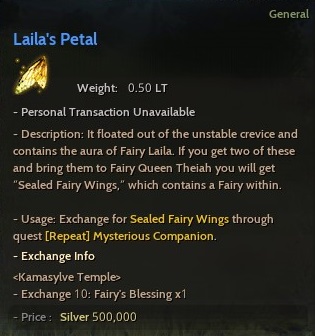 The quest can be completed by delivering Laila’s Petal. You have a chance to collect Laila’s Petal by defeating monsters, gathering, and fishing regardless of region.

You may be asked for Cooking Honey while progressing through the questline. Cooking Honey can be obtained by shooting beehives with a matchlock in the forests of Southern Balenos, or honey production from Alejandro Farm in Serendia.

You cannot know which tier of Faint, Glimmering, Brillant, or Radiant Fairy Wings your Fairy has until you release the seal.

Also, some fairies have learned the common language of Black Desert from their Queen. 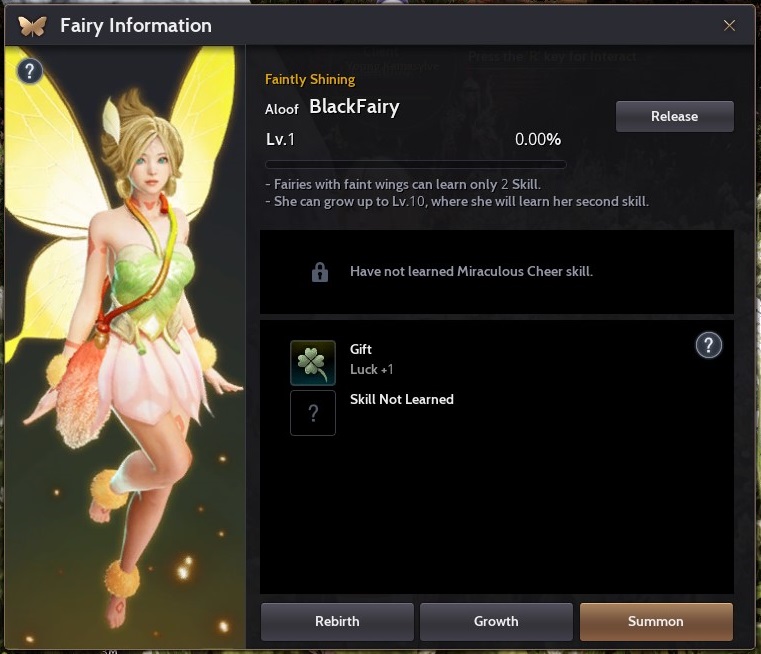 When you summon a fairy, you can grow the fairy and view its current level/abilities in Fairy Information.

You can unsummon the fairy temporarily to hide it in a rift. Fairies can also be released to send them home.

- What are the Fairy’s Mysterious Abilities?
The number of skills Fairy Laila can learn depends on her innate potential at birth.
Each fairy skill has a maximum of 5 levels, and once the skill is learned, its level cannot be raised or lowered. 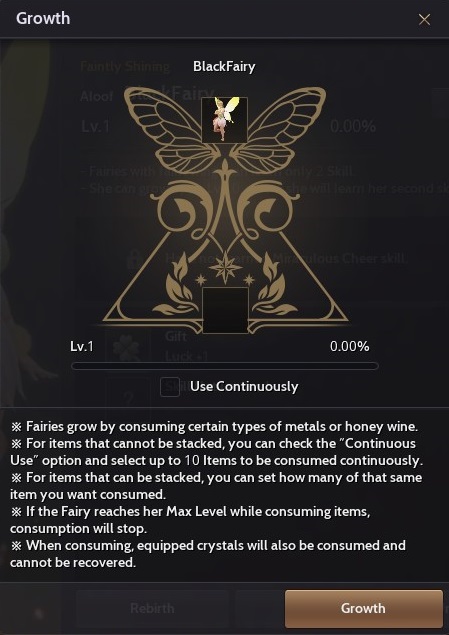 Additionally, you can grow your fairy by providing them with certain equipment (weapons and armor), Black Spirit's Claw, Sweet Honey Wine, or Ornette’s Dark Honey Wine.

Fairies will learn 1 skill for every 10 levels, and all fairies have a standard skill that grants Luck +1.

Once learned, skills are randomly assigned a skill level from 1 - 5, and skill levels cannot be altered afterwards.

The types and effects of skills fairies can learn are as follows.

There are several reasons why an Adventurer might need to release their fairies depending on whether they like the fairy or not!

First Example: If you ever meet a more appealing fairy, then you can use the release function to return your current fairy home. The departing fairy will leave behind some Fairy Powder as gratitude.

Second example: If you feel unsatisfied by the fairy you met, then you can exchange the fairy wings with Ceilyn in Kamasylve Temple. Ceilyn will give you Sweet Honey Wine, which can be used to grow your fairy.

Third Example: If you are happy with the fairy you met, then exchange 10 Laila’s Petals to get 1 Fairy's Blessing through Theiah in Kamasylve Temple.

Doesn’t having a fairy at your side in your Black Desert journey sound nice?

Well, your journey won’t be any harder than before just because you don’t have a fairy. Still, your adventure would be far more enjoyable if there is a companion around.

We hope you will meet a likeable fairy, and enjoy your future adventures together!

View list
Comments 13
Kerry
Lv. 60
No topless male fairy?
Keibi
Lv. 58
^ Waduhek
Hanamanko
Lv. 61
WHERES THE LAHN SAUCE!!
HarukaTomatsu
Lv. 60
Please release the lahn
Wamteen
Lv. 59
lahn when?
Cafeaulait
Lv. 56
after this PATCH guys lahn is next! :)) be ready...
Windydale
Lv. 60
When is lahn coming? All updates look so dull without her, even fairies.
Talibanroc
Lv. 61
Hi GM, BDO Fairy quest accidental forfeit. How can i get back?
The post was deleted.
The post was deleted.
Geeshy
Lv. 61
^ first u need 1 petal for 1 sealed, after that u need 2 petals
PoShan
Lv. 62
Lvl 52, done all calpheon main quest. (NO FAIRY QUEST)
You should re-check and re-state your POST!
Pascale
Lv. 62
gem reset when
Reaverr
Lv. 56
Serene Fairy Type Voice Lines Do Not Play
Natjkal
Lv. 59
^ Because serene = silence.. she will not talk anything
Cancel Register
Cancel Register
1
View list