I’m GM_Olvia, and I’m back with more good news!

The Kzarka update that everyone has been waiting for was added on 2/22!

You probably heard about Kzarka, The Lord of Corruption, if you carried out the main quests from the Black Spirit.

If you defeat Kzarka, you can acquire a Kzarka weapon, which are the strongest weapons that exist in the game.

You’ll learn about Kzarka and how to get your hands on a Kzarka Weapon in this GM Note.

▼ The first World Boss ever - Kzarka

To defeat Kzarka, you’ll need strong armor, plenty of HP potions, and maybe some food buffs to help you survive against his deadly attacks. Last but not least, you’ll need to work together with friends in a party to bring him down.

You’ll definitely know when Kzarka appears as his deafening roar rips through the air along with a system alert message. This boss monster is a formidable opponent.

He appears at the innermost plaza of the Serendia Shrine.

It might be a good idea to get there before Kzarka appears or wait for him on a less crowded server.

You can gain Knowledge about Kzarka by increasing amity with Hakkon, the Node Manager of the Serendia Shrine. Once you’ve gained the knowledge, you’ll be able to see Kzarka’s HP.

If you plan to defeat Kzarka often, you should get the knowledge beforehand since Kzarka uses various skill patterns depending on his HP status.

The chance of acquiring a Kzarka Weapon is what makes Kzarka so popular.

Many adventurers hunt Kzarka to get their hands on the most powerful weapon available.

Kzarka Weapons have a high base AP, and 2 sockets.

Casting Speed and Attack Speed also goes up by +3 so it’s useful for all classes. 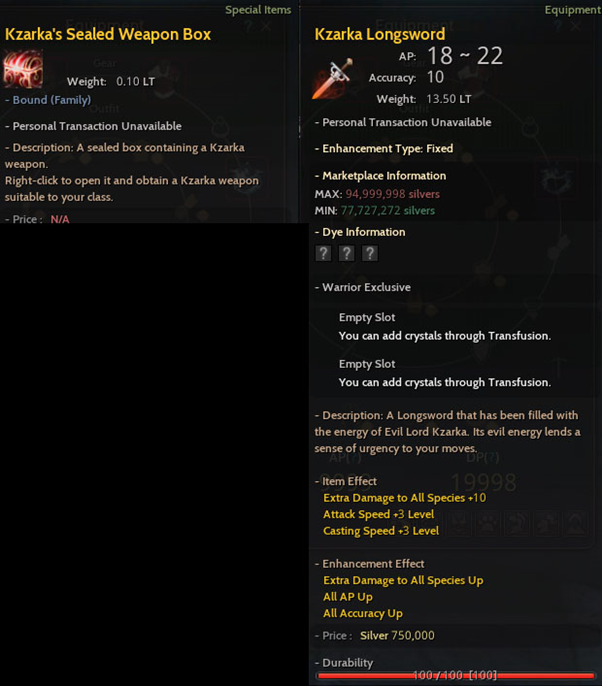 ■The core strategy to defeating Kzarka are the red circles and columns!

Kzarka has very high HP and AP so you may want to think twice before challenging him alone relying on HP potions. Avoid catching Kzarka’s attention during the night when monsters are stronger. Even if you think you’ve prepared yourself and have taken some food buffs, Kzarka is extremely strong at night.

We hope that this note has given you some useful tips about Kzarka, the Lord of Corruption,

We’ll be back with more fun and useful information in the future.

Clystar
Lv. 58
you expect us to fight without awakening ehhhhh
BobaTea
Lv. 59
Of course, expect to go through the same thing other servers did when this game first came out. Everyone should just be happy we are getting updates at the rate we are VS original release updates.
LordAze
Lv. 57
lol the boss died within 2 minutes WITHOUT awakened. rip
JuicyJ
Lv. 55
just now.. around 5am the drop was only hunters seal 1pcs only.. its like wtf? i dnt sleep at all just to wait.. and all i got is 1hunter seal... BRAVO!
Amanah
Lv. 56
5ucked into water anyone?