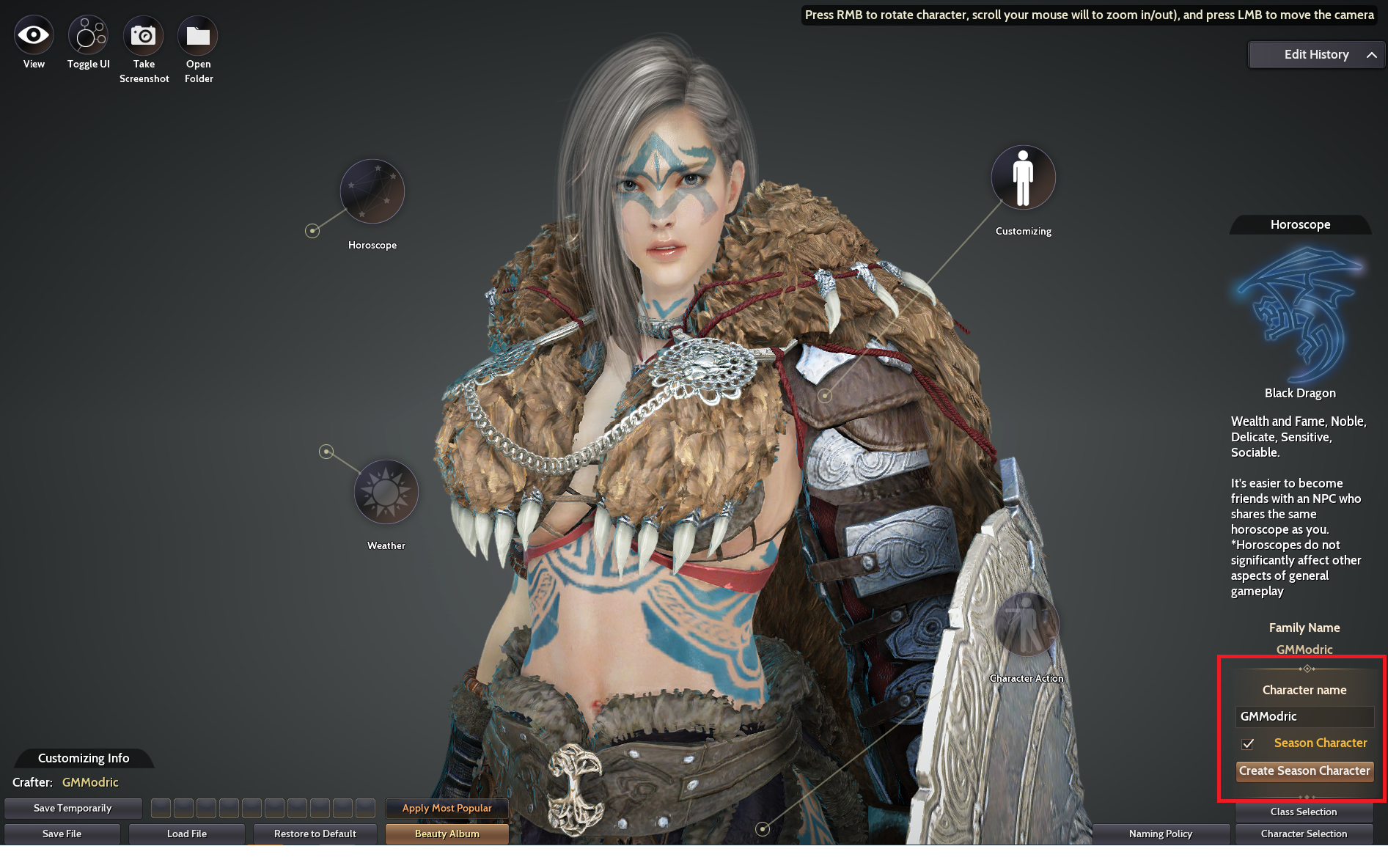 Only Season Characters may enter a Season Server. But before you rush to make a character, keep in mind that you can only create 1 Season Character, so make sure you carefully think about which class you’ll play.

All classes have their own unique characteristics and playstyles, so if you’re not sure on which class to choose, you can always try out a class by creating a Trial Character.

As a Trial Character, you can experiment with any classes’ skills in Pre-Awakening, Awakening, and Succession, so give it a try and test them out before you create a Season Character. 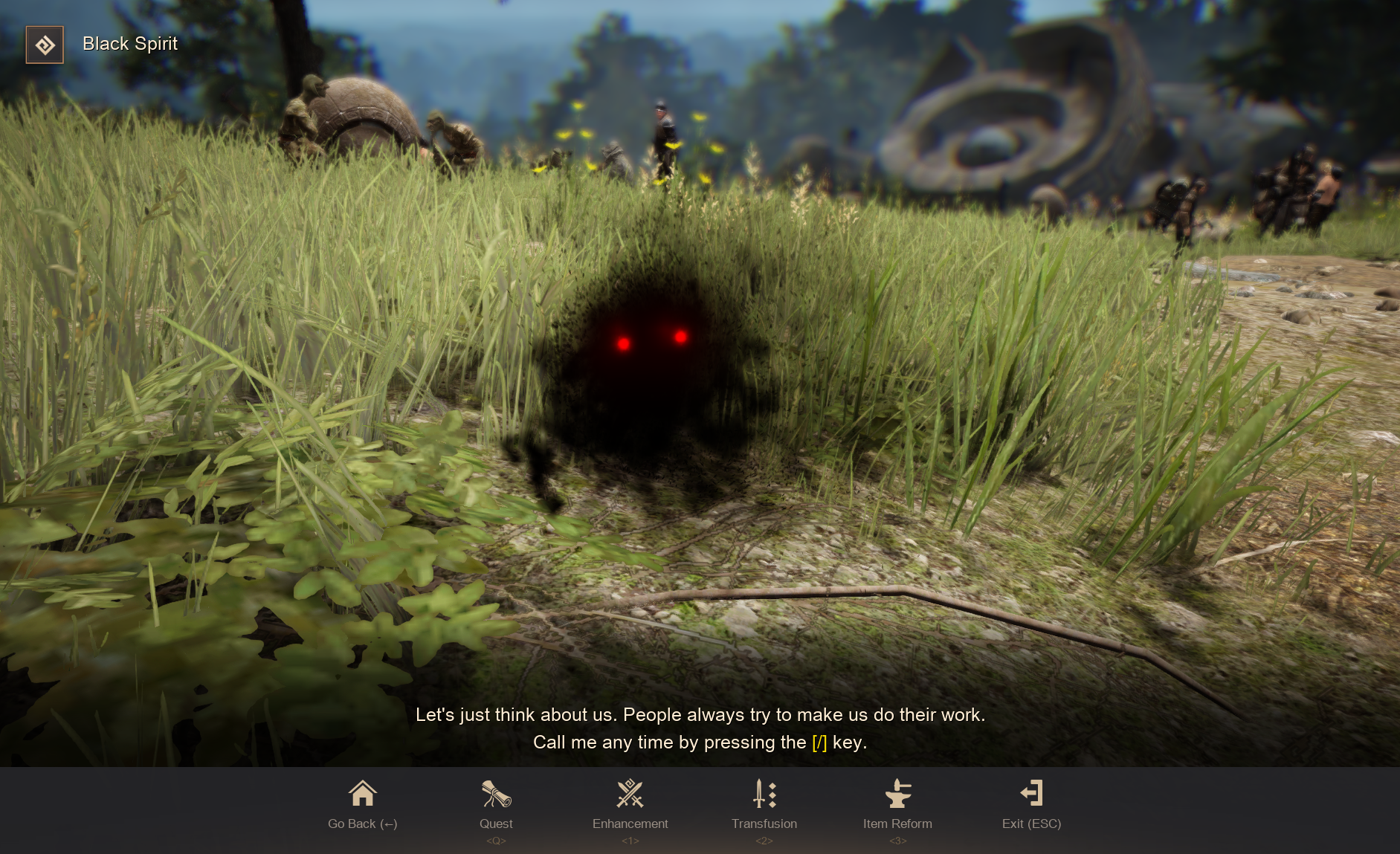 Now that you’ve finally chosen your desired class, shall we embark on an adventure to the wide unknown?

If you feel overwhelmed and not sure of what to do in the massive, open world of Black Desert, you can call upon your cute and helpful (maybe not always) companion, the Black Spirit, by pressing “/”, who will guide you along your way.

The Black Spirit will readily grant you quests, and upon completing them one-by-one, you will discover that you’ve become quite the seasoned adventurer. So, what are you waiting for? Go and set out for that adventure!

Also, unlike normal servers, the Season Server will also grant you Combat Experience (EXP) + 100%, and Skill EXP +20% buffs. Since there is no limit to the experience buffs you can acquire, you will always have Combat and Skill EXP buffs.

Complete the Main Quests given to you by the Black Spirit to see your character naturally progress in level and strength. (๑˃̵ᴗ˂̵)و

Upon reaching Lv. 10, do you see the shining Black Spirit mark on the upper right-hand side of your screen? Each time you reach a certain leveling goal, you will be awarded a leveling aid box.

There will be items and buffs inside the leveling aid box that will help you in your Black Desert adventure, so it is highly recommended you immediately open and use what’s inside the box!

Oh right! You can also purchase the Black Spirit Pass from the Pearl Shop to obtain even more rewards.

Leveling with the Main Quest!

Open the World Map (M) and you’ll see a dense fog blanketing over everything!

From here on, you’ll be journeying across the entire continent... doesn’t that sound so exciting? ◟( ˘ ³˘)◞ ♡

The Main Quests will take you through countless regions, such as Balenos, Serendia, Calpheon, Mediah and others, where you will be able to uncover their past and experience the present with your own eyes. Also, just thinking about how you’ll be able to witness the joys and pains of the NPCs from each region makes us giddy with anticipation.

You can check Main Quests in the Quests (O) window under the “Main Quests” tab.

From Velia to all major capital cities,  Fugar will be your Season Server NPC waiting by the Stable Keepers with 40 days of quests, the knowhow and other items to support you on your journey, so please take your time to see him every day.

Finish all 40 daily quests and there’ll be a sweet gift waiting for you! (ง •̀ω•́)ง✧

Particularly after completing the Main Questlines in Balenos, Serendia, Calpheon and Mediah, you will be awarded the “Secret Book of Misty Breeze” by Fugar. Use the “Secret Book of Misty Breeze” to acquire a huge amount of Skill EXP, which will help you learn new skills which you would’ve otherwise lacked the appropriate amount of skill points to learn.

The Way of the Seasoned Adventurer

We look forward to seeing exactly what kind of amazing Adventurer you become!

If you felt your limits being tested in the wilderness of Mediah, try your hand at obtaining some Tuvala Gear!

Tuvala Gear boasts a higher success chance for enhancement than normal boss gear, and you can use the Time-filled/Refined Magical Black Stones you’ve acquired from the daily quests Fugar gave you.

Then pick up the Awakening quest from the Black Spirit’s Suggested quests and complete it!

Once you do, you will gain an Awakening weapon as well as be able to learn Awakening skills.

You may be wondering, ‘I prefer the normal mode’s combat style. Do I really have to use Awakening?’

For Adventurers who enjoy the normal combat style, you can complete Succession quests right after you finish the Awakening quests, which will allow you to use beefed up normal mode skills!

Both Awakening and Succession provide a refreshing new take and entertainment for our class as well as adding powerful skills, so please make sure to complete them!

After completing Awakening or Succession, you will come across the vast desert sands of Valencia!

Whereas up until this point, you could only obtain the Time-filled and Refined Magical Black Stones from Fughar’s daily quests, once you enter Valencia, you’ll be able to acquire them looting the monsters you defeat!

Now the time has finally come for you to step into the role of the Warrior of Tuvala.

Go to Fugarwith TRI (III) or TET (IV) Tuvala gear equipped and he will reward you with items that will increase your success chance at enhancing your gear even further.

You can only obtain these Advice of Valks from Fugar during the “Season Server” period, so please make sure to find Fughar before the season ends!

Upon reaching Lv. 60, 61, Fughar will grant you 1 PEN (V) Tuvala Ring and Earring, respectively, so don’t slack off with leveling now, you hear?

Our journey does not end simply with graduating from the Season Server.

Adventurer, your untold adventure has only just begun. ٩(๑>∀<๑)۶

1) Transfer your Character/Gear to Normal Servers!

When the Season Server closes, you will still be able to use Tuvala gear, and since they are Family bound, you can move them to other characters in your Family.

However, Tuvala gear that’s been transferred over to the normal servers may no longer be enhanced, so make sure to try and enhance your gear to the highest levels while your character is still in the Season Server!

For all Adventurers who graduate from Season Servers, we will award a commemorative item!

This includes the graduation certificate, cap, emojis and a gift box.

3) A Secret Gift from Fugar!

If you complete all 40 daily quests before the Season Server comes to a close, Fugar will give you the either a “PEN (V) Capotia Ring or Earring” and Advice of Valks (+100).

What if you didn’t complete all 40 daily quests before the Season ended?!

Don’t worry. You can still complete the daily quests after the Season ends and receive your secret gift in the end.

You can exchange 1 of your Tuvala gear for a Boss gear with the Graduation Certificate in possession.

※ You can exchange a TET (IV) Tuvala Shoes for TRI (III) Muskan’s Shoes by using your graduation certificate.

※Boss gear obtained by using your graduation certificate will become Family bound and unavailable to be registered on the Central Market.

View list
Comments 35
Villager
Lv. 56
My village thanks you.
0
Ryeiss
Lv. 61
Question: If I do exchange my weapon at 4) Exchange Season Gear for Boss Gear!


Will it follow my class on Season Server? or I can open it a box in any class I want in normal server?
2
Frohze
Lv. 57
@Ryeiss Would like to know that as well
0
Exaviera
Lv. 62
@Ryeiss Once you exchange the season weapon to boss weapon you'll receive a box and open it to your specified character to receive the specific weapon for your class.
1
MiSaTzu
Lv. 60
This seasonal server last for how long?
0
LingDong
Lv. 60
@MiSaTzu I heard it would last 3 months
0
Rythryn
Lv. 60
- Transfer your Character/Gear to Normal Servers
De__scription only mentions details about gear, so we can transfer the whole character to normal servers with the gear to play?
0
XYPCD134
Lv. 60
Is the Season server and Main server separated from each other? Will the pet or any other content in the main server be usable in the Season Server ?

2
ShIn3
Lv. 61
Did i need a character slot to creat season character or what
0
Gelo
Lv. 62
@ShIn3 Yes you do need 1 free characters slot
0
Kumaai
Lv. 61
Do i need an empty character slot to pre-__create?
0
Gelo
Lv. 62
@Kumaai Yes you do need 1 free characters slot
0
Pyron
Lv. 60
I have used up all my free character slots and I cannot delete any one of them, will we be getting any free slots or purchase through loyalties?
0
The post was deleted.
Exaviera
Lv. 62
@Pyron There will be no free character slots, delete one of your characters or buy a character expansion slot.
0
Fayeriaa
Lv. 61
Hi, just want to ask if it's possible, can you leak the skill points we got from that book of Misty Breeze? just approx is okay.. or maybe the range? thanks a lot xD
1
Valcie
Lv. 62
it will ruin everything -_-
0
Celine23
Lv. 62
@Valcie i think i agree with u,,, just make confuse with weird event.. hoaem... maybe quiting is good ...
1
SkyLancer93
Lv. 61
@Valcie i agree, wasting time to play new character again start from Zero again with full scam EASY ENHANCEMENT !
0
LianRen
Lv. 61
@SkyLancer93 this is good catch-up mechanic for newbie or returning player, they don't have to compete with other players with full PEN gear while grinding.
1
The post was deleted.
Shiyon
Lv. 61
is tuvala accesory transferred to ?
0
SilvFist
Lv. 61
you want me to delete my char and item in it?
NO thank!!!
0
SHIRAZU
Lv. 62
Hello....what if I didn't pre-__create and the season started...will i miss the chance to play the seaseon server?
0
LianRen
Lv. 61
@SHIRAZU you will miss the free item. season server will be open for 3 months.
0
Keicho
Lv. 61
I'm interested with 100fs, pen capotia ring, 60fs and 40fs x 7.,
The question is, as a vet, can I use my gear on normal server to the season character?

0
LianRen
Lv. 61
@Keicho only gear from quest and Asulas..
0
Keicho
Lv. 61
@LianRen Oh that zux., maybe black abyssal and roaring and new quest accessories would suffice while still grinding for the tuvala mats., heard they're pretty easy to grind ., like 300-400per hr
0
Celine23
Lv. 62
i already pre __create class in season sv,, can i change to other class???
0
Merline
Lv. 62
does the exchanged boss gear can be enhance?
0
BlackClown
Lv. 60
@Merline Noo
0
ErinaShy
Lv. 63
i would like to clarify this "transfer you character/gear on normal servers" are the silvers grinded included?
0
Melvs
Lv. 63
How to __create if I have max 19/19 char slot :(
0
Eoliian
Lv. 61
I accidentally deleted the [Season] New Adventure Box, can you please restore it PA? thank you!
0
KlevaTara
Lv. 59
@Eoliian same bruh... i thought it was gonna be given to us again when we delete and __create a new season char.. what a let down but ok... :/
0
MInasakiTsuyu
Lv. 61
Hi just want to ask and to be sure what is the "daily quest" exact name? is it the quest that you just have to talk to fughar?
0
HaruUrara
Lv. 61
Since the early graduation starts at Aug. 5 based on the new notice, can I graduate with my season character and continue the remaining Fughar daily quest?