[Preview for Next Week]

Starting next week, pre-create your season character and get ready for guaranteed explosive growth. 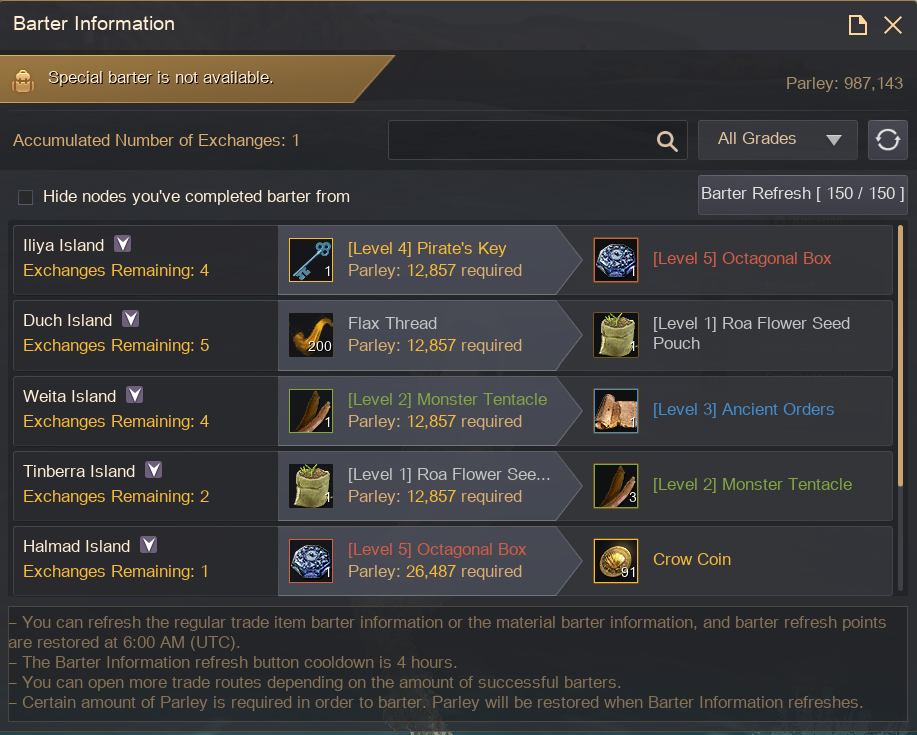 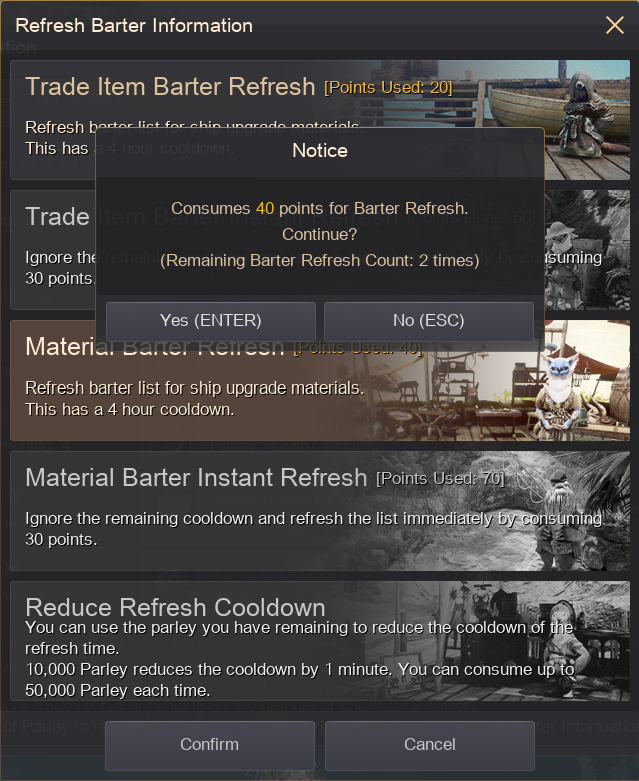 - You can also Ship Material Exchange to obtain materials to enhance ships and for Great Ocean treasures.

- You can refresh Ship Material Exchange for a maximum of 2 times per day.

- When refreshing Ship Material Exchange, for a low chance you can discover Bartering Information on items from all islands which you can exchange for Crow Coins. You can exchange Crow Coins for all [Level 2] ~ [Level 5] Sea Trade Goods.

● When using Material Barter, the Accumulated Number of Exchanges will be greatly reduced when obtaining the following Carrack upgrade materials.

- Tear of the Ocean

- Everyday at 6AM realtime, 100 Refresh Points will be restored.

- Applying the Value Pack buff will grant an additional 50 points to be restored.

- When refreshing Barter, the amount of points consumed will differ based on the accumulated refresh count.

To lower the difficulty for starting the Great Expedition content, we created the path of building Bartali Sailboats to Epheria Carracks, and have added several support systems to aid in their growth. And yet, we know that there are many adventurers who thirst for more things to do in the whole process early on. Thus, after thinking long and hard about this matter, we decided to add the new level of "Material Bartering" to the entire process.

Bartering will now be divided into Sea Trade Good Exchange and Ship Material Exchange, and in doing so, we also had to change the entire Bartering Refresh method. Through Ship Material Exchange, you can acquire a variety of upgrade materials for all ships including the Epheria Caravel to the Epheria Carrack, as well as blue-grade Epheria Carrack equipment. For adventurers who no longer need to exchange for materials, we've also added a new bartering item "Golden Plate" that they can try their luck at obtaining.

Bartering is, when compared to the standard of things that tend to wear out players from enjoying Black Desert content, one of the areas adventurers can potentially acquire a high level of profits, and hence a large number of adventurers are sailing the high seas on their respective carracks. We too are keeping a close eye on things, especially to stamp out any chance of irregular trade that might occur. From this view, the change to refresh we applied in our last Black Desert Global Labs was intended to narrow the gap between hardcore and casual players, yet one negative consequence was drastically reducing the profits obtainable based on time invested, hence we ended up readjusting that change. On one hand, especially to return to the initial intention, we greatly reduced the amount of accumulated bartering counts that was required for the emergence of exchangeable Carrack materials, which was equally being applied to material bartering, thereby hastening the amount time necessary for seafaring adventurers with caravels and frigates to gain access to carracks.

● Added the Rent Horse function to the Stable.

- The Rent Horse function allows certain adventurers to either rent out their own horses or rent others' horses.

- The renter will pay a contract fee of 100,000 silver to rent a horse for 7 days, while the owner can use Force Retrieve to reclaim their horse. (However, they can only do so if the horse is in the Stable or the renter is offline.

- Rented horses will receive the effects of the gear they're equipped with; however, you cannot unequip gear on rented horses

- You can rent horse breeds up to Tier 8.

- You can obtain these items when reforming Special Chicken Feed and Special Haystack.

● Prime: Crow Flare - Changed to no longer restore Stamina when using the skill.

● Awakening: Tantu's Iron Buster - Changed the skill's cooldown to activate when comboing Ground Lifting after Headbutt, Frenzied Destroyer.
● BusterTraining - Fixed the issue of the player momentarily slowing down upon hitting with the skill's left and right attacks.

● Wave of Light - Added the Reduce All DP effect on skill hit.

● DeathLine Chase - Changed the skill to maintain the Lancia stance when used backwards.

- However, if used consecutively, it will transition to Shield Chase instead.

● Removed the line "The time may be reduced by enhancing this processing stone" from the item descriptions of Loggia, Techthon, and Manos Processing Stone.
● Added the daily quests in which you will be rewarded a Flare in its item description.
● Fixed a typo in Dried Briar's item description that incorrectly displayed "Stamina" as "Endurance."

● Fixed when spawning bosses from Main Quests to no longer delay when the hits began to register.
● Reduced the number of the following monsters that spawn in Balenos:

● Quests (O) - Added a category of Adventure Log quests in the Suggested tab.

Many adventurers in Black Desert sought out to find and complete Igor Bartali's Adventure Log when it was first released. For adventurers who have yet to begin the journey, yet may feel discouraged to start, we've decided to compile all Adventure Log quests under one category to help such adventurers and ease their first steps. We will continue in our efforts to provide a more enjoyable and convenient experience especially for adventurers beginning a new adventure.

● Added additional information on stealing the mouse in '[Kamasylvia] A Poacher's Suggestion,' and greatly improved the chance to steal Friella's Mouse.

● Simplified the routes for the Calpheon Main Quests in Behr and Hexe Sanctuary.

- Change the NPC issuing and completing the quests next to Becker's hut, thereby allowing for players to finish all quests in Hexe Sanctuary then return to Behr village.

● Increased the number of quest boxes in the following regions.

● Changed the longer Knowledge themes to change lines in the Interest Knowledge Status window.
● Shortened quest and dialogue list titles with NPCs and changed to be checked via text bubbles.
● Improved the trash bin in the Inventory (I) window to be highlighted if the player attempts to throw away an item to anywhere other than the trash bin.
● Added a notification window to appear to check when exchanging items with certain NPCs.
● Added to the Central Market capacity description that the maximum amount of capacity from Family Fame cannot exceed 2,000.
● Changed the color of the knowledge grade of monsters when obtained to match those in the Knowledge (H) window.
● Changed so when attempting to change the rank of Guild Member who is registered as a War Hero of another Guild to display the notice "War Heroes cannot be assigned a position."

● Changed the logging in/logging out alerts of friends in the Friend (N) window of adventurers that are participating in Conquest/Node Wars to no longer appear.
- This will only impact adventurers in servers with Conquest/Node War in progress.
- Alerts notifying the connection status of Guild Members in the Guild Window remain unaffected.

● Changed for a notification to appear when attempting to repair, recover, etc. Guild mounts via the Stable or Wharf with insufficient Guild Funds.

● Changed the Declaration of War button in the Guild (G) window to not appear if the maximum number of wars have already been declared.

● Changed the Totem, Alchemy, Produce and Palette buttons on the lower part of the Inventory (I) window to not be selectable when using a UI that changes the entire screen such as interacting with NPCs, opening the Pearl Shop,