Here are the updates made to Black Desert on September 2, 2020.

Event 3. Hashashin Has Got You Covered!

Event 7. Celebrate the Hashashin + Autumn Season with 70% Off Packages! 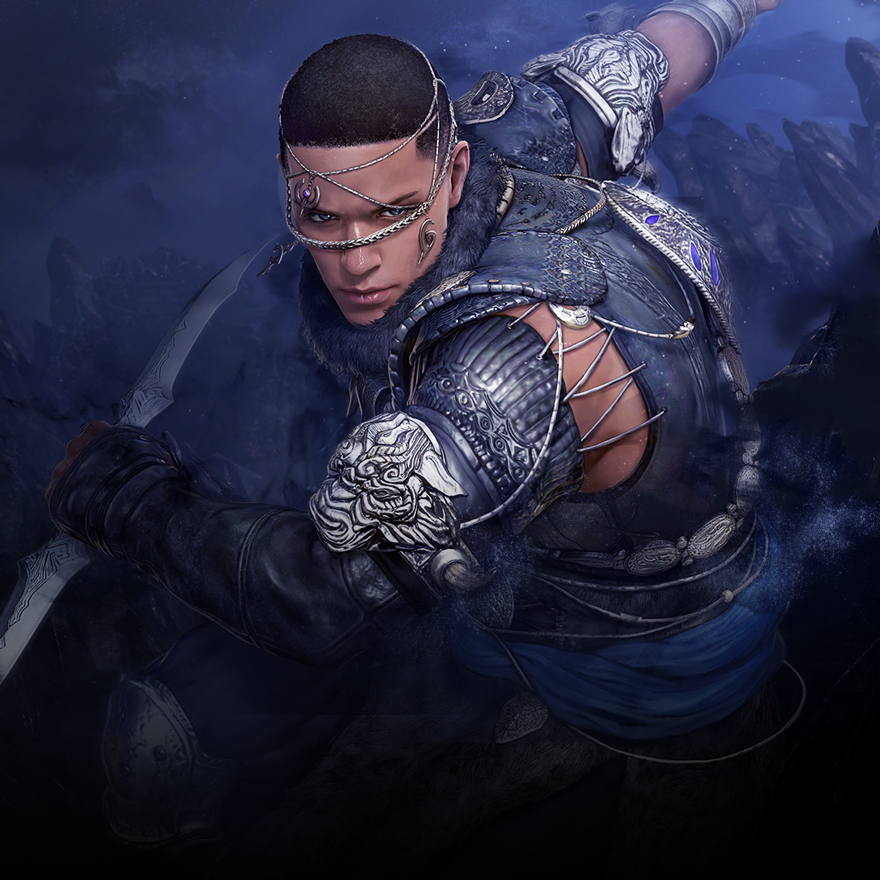 ● Hashashin, the new class, has been released.

- Meet Aal's warrior who seeks the truth behind the fallen Blackstar, now!

● The Autumn Season has started.

- You will be able to level up your season character incredibly fast by using the benefits only season characters can have such as EXP increase buff without level restrictions, [Season] Leveling Aid Boxes, [Season] Secret Book of the Misty Breeze, etc.

● Added the Black Desert Season Challenges for Season Characters who will obtain special rewards by completing the given challenges.

- Completing each challenge will reward your Season Character with an item to aid in your character's growth. 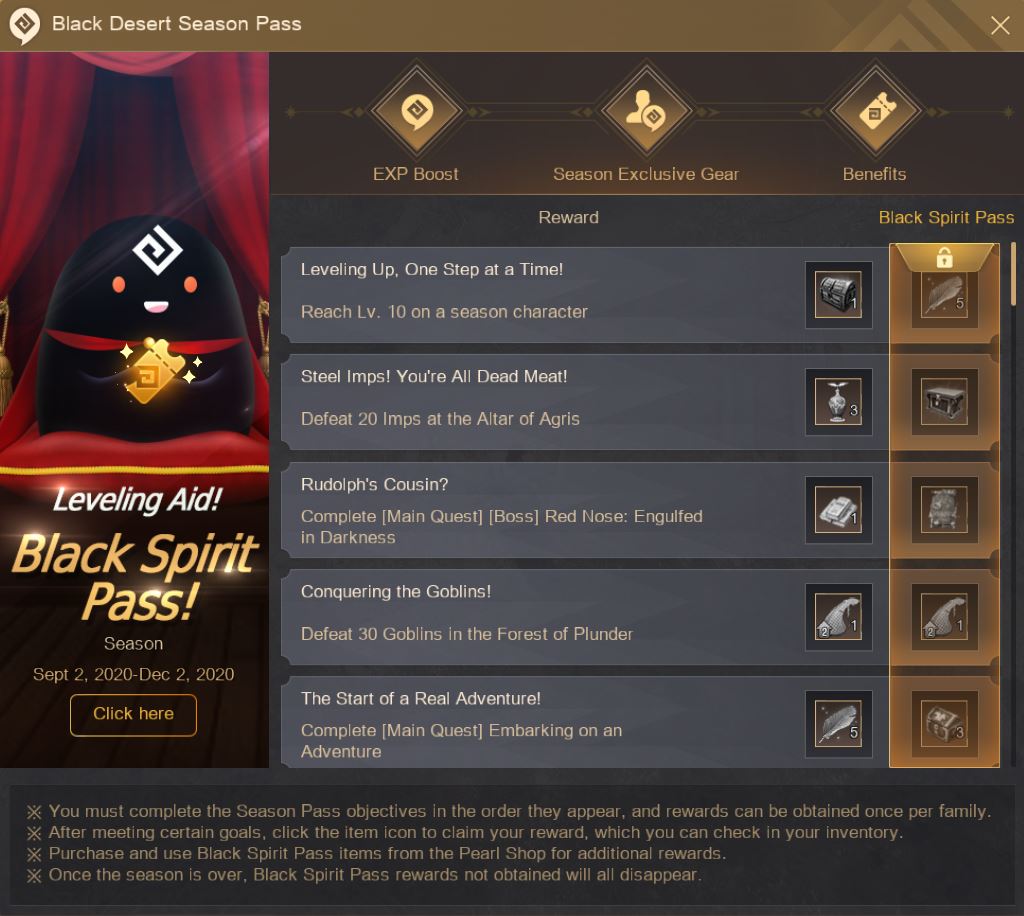 ● Coco Leaf has been introduced with Black Desert Season Challenges.

- Collect Coco Leaves and find Patrigio in Velia to exchange them for a special item. Please note that there is a limited number of exchanges for certain exchange items.

● As the Autumn Season has started, Valencia 2 and Serendia 2 have been changed to season servers.

● Added Perilla's Star, a special alchemy stone that can be obtained through the Autumn Season.

- Although the place where the final star from Perilla to her beloved Fughar is located is still unknown, rumor says that a few clues have been found here and there.

- Rift's Echo can be obtained by combining 5 Rift's Fragments. Rift's Fragments can be gathered from defeating monsters in Valencia, Kamasylvia, and Drieghan, as well as from Savage Rifts.

- Rift's Echo can only be used in Season Servers, and using Rift's Echo will summon waves of Violent Boss monsters. Defeating the Violent Boss will grant items that will further aid your Season Character's growth.

- Rift's Echo consists of 3 total stages. Completing the Rift's Echo's 2nd stage has a low chance to summon special monsters from the rift, and defeating certain monsters within the given time limit will grant an item that will definitely help you in growing stronger. During the Rift's Echo's 3rd stage, a Most Violent Boss has a low chance to appear. These bosses are quite powerful, yet defeating them will grant better quality loot compared to other 3rd stage Rift's Echo bosses.

- Bosses that are drawn to the Rift's Echo are all Violent, so we recommend facing them with a party.

※ Rift's Fragments can only be obtained on Season Servers.

● The number of audience who are eager to see the thrilling fights at Pit of the Undying has been increasing and so Patrigio, the First Crow, has started to give more Crow's Black Jewels which are needed to do the promotion matches to those adventurers who win their fight.

- Changed the number of Crow's Black Jewels you can obtain through the quest "[Daily] To the Bottom of the Pit of the Undying" as follows.

- You will get the Crow's Black Jewels when you win against , the last enemy at Pit of the Undying.

● Added a quest that allows you to fight againstYulho, Pit of theUndying's rising start, 1:1.

- This quest is available only once per family. You must complete the quest [Promotion] DUO: Undying Crow's Insignia and accept the quest Chorpy's Secret Offer from Chorpy in order to do this quest.

- You will get Crow's Black Jewel x10 when you defeat Yulho.

● The number of adventurers who are visiting the Battle Arena to prove their strength has been increasing and the Cliff Detached Force has opened a new 1:1 arena inside the Battle Arena for individual matches.

- The first two adventurers to talk to Hafun will be able to enter the new 1:1 arena.

- The new arena will have a limit time of 3 minutes. If no winner is decided within 3 minutes, the two participants will be moved outside of the arena.

- The winner will remain inside of the arena and the loser will be moved outside. Adventurers who are not engaged in any individual match within the Battle Arena can see the current progress of the match at the new arena via the 1:1 Arena UI located on the upper left of the screen. 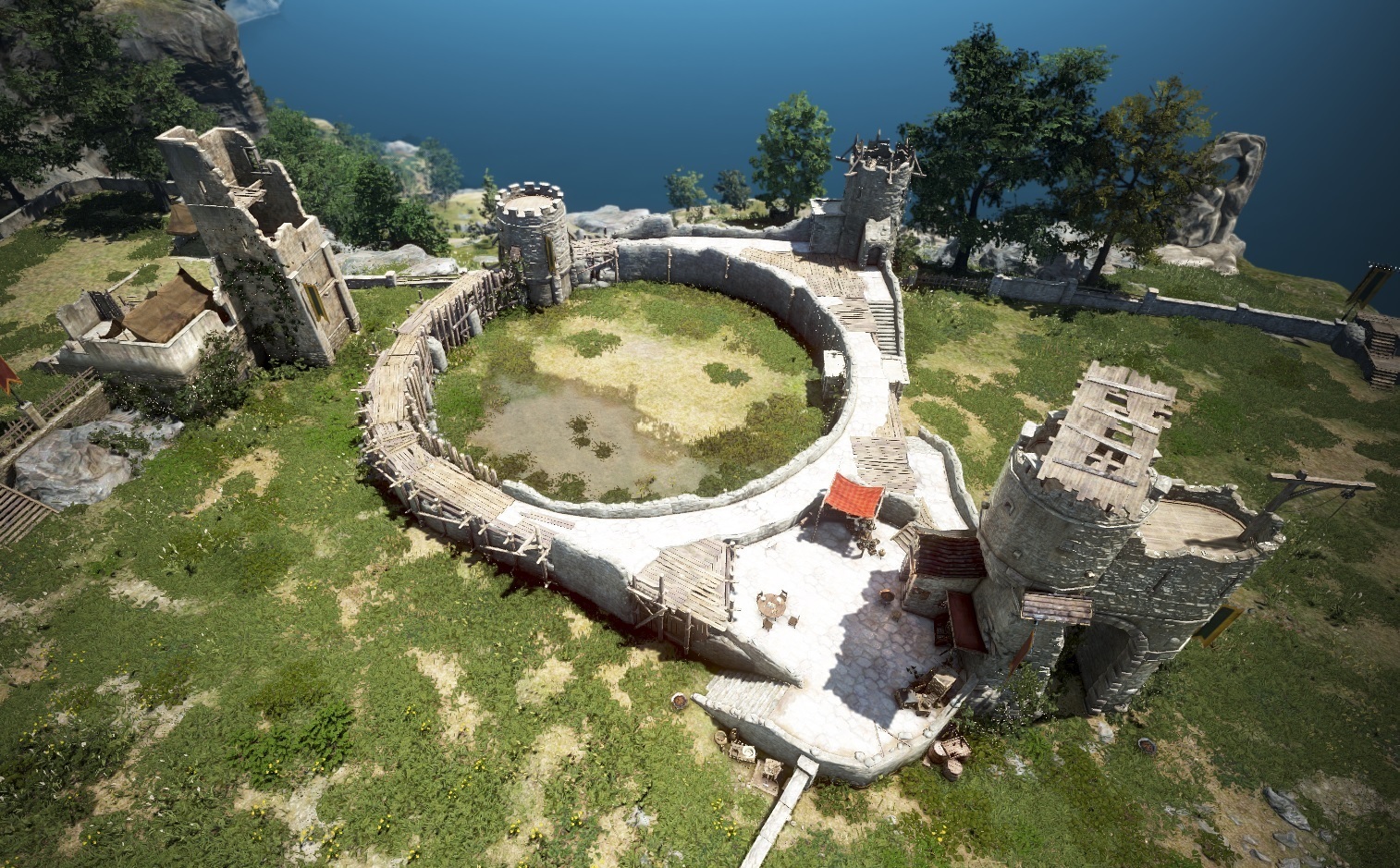 ● Changed the way in which you enter the Battle Arena.

- There will be a total of 10 open battlefields in the Marni server Battle Arena. Select the battlefield that you wish and enter.

- You won't be able to participate in the Battle Arena while in a server with an ongoing Node/Conquest War.

● Changed the day on which certain nodes' Node War occurs as follows.

- Considering that Sundays are when Node Wars occur most actively, we have changed the day on which certain nodes' Node War occurs to Sunday to allow more adventurers to participate in Node Wars. We have also distributed the nodes that used to be concentrated on Mondays and Fridays more evenly so that you can participate on the day you prefer.

- Adjusted the Search button to match the height of the "Enter a search term" bar on the upper-right hand side.

- Changed the Item List on the left side to display even more items.

- Changed the Title font size to be greater than the contents in the Item Information section.

- Fixed the graphical issues when placing the mouse over certain areas of the window.

●Made Instant Resurrection usable up to Lv. 20 (previously Lv. 15), and added the following regions where it can be used:

● Prime: Shield Chase - Fixed the issue where you could use the skill without wearing a shield.

● Ultimate: Blitz Stab - Reduced the movement distance of the skill.

● Below the Belt - Increased the skill's Extra Hit Damage.

● Black Spirit: Below the Belt - Fixed the issue where the skill was dealing 1 less hit for its final hit.

● Frost Pillars - Improved the skill to now combo into New Year's Eve after using the skill.

● Serpent Ascension - Increased the skill's activation speed, and the Ninja now assumes the Transition Stance when using the skill.

● Drastic Measure - Increased the charging speed of the skill.

● Half Moon Slash - Improved to combo more smoothly into other skills after using the skill.

● Flow: Indignation - Added the Down Smash effect to the skill.

● Prime: Soul Basher - Improved to combo more smoothly into other skills after using the skill.

● Fixed the Undying Crow's Insignia item description to better reflect the changes to how the Pit of the Undying is carried out.

● Changed the Phnyl that appears in the Navarn Steppe to be marked as Elite Monsters on the minimap.

● Changed the background of certain areas of Hexe Sanctuary monster zone to allow securing a clearer view when defeating monsters.

● Extended the event period of "Search for Fabled Treasures Once More! " to obtain treasure loot from certain hunting grounds until September 16. [Click here]

● The "A Vell of A Time" event which started on June 30 will now be a permanent addition including the additional spawn and spawn time changes.

● Fixed the issue where the character would freeze if a cutscene was played while interacting on a mount with an NPC.

● Fixed the issue of leaves floating in mid-air in certain parts of Stonetail Wasteland.

● Lowered the difficulty of certain quests in Secret Quest Challenge: The Tale of the Fallen Kingdom II.

- The King and the King

* Reduced the amount of required items for the following quests.

- A Sudden End of Hostilities

* Changed the quest "The Aged Lion" to require only one adventurer to have met the conditions to make the Wild Rose appear.

* During "The King and the King" quest, you can now obtain the required item even while hunting and/or butchering Giant Wolves.

* Increased the amount of time the summoned monster stays alive during "The Eagle's Lament."

● Fixed the issue where using remote collection on Secret Quest items from one's campsite storage would sometimes make them disappear.

● Changed the message that appears after pressing the Battle Arena button after entering the Arena of Arsha with a Trial Character.

● Fixed the issues where the UI for Florin's Leaf, Martial Spirit Shard, Red Blade, Shards of Darkness would move irregularly and out of the screen while in Edit UI mode and using the Custom HP Bar.

● Improved the Jukebox's volume to be better heard in the Pearl Shop (F3).

● Added warning text to certain outfits of the following Classes:

● [Guardian] Fixed the graphical glitch around the Guardian's right shoulder when wearing the Terrminé Outfit.

● Changed the 5th and 6th dye parts for the [Lahn]CleadArmor.

● Fixed the issue where if a Character had no Profile Pic, you could not Change to that Character.

● Fixed the issue where you could not chat with your team in the Red Battlefield.

● Fixed the issue where only the guild members of the Guild Alliance leader could use the Returning function when participating in a Node or Conquest War with an allied guild.

● Fixed the issue where leaving the Altar of Blood would sometimes make the Minimap disappear.

● Changed the Red Battlefield to now automatically kick out all participants after 2 minutes if there are less than 2 players remaining.