- Use the Mythical Censer to attempt Mythical Awakening which has a fixed success rate of 3%.

- Successfully breeding the 2 Arduanatts will lead to 1 awakened Mythical Arduanatt.

- If you fail, the 2 Arduanatts can be recovered at any time, and you can use the Mythical Censer to try again.

- Arduanatt's skill from birth will be at 100% mastery and will not disappear even if you reset their growth.

- The base price of the Mythical Arduanatt will be higher than the combined prices of the male and female Lv. 30 Arduanatts. However, due to its uniqueness, it cannot be registered in the horse market.

- Mythical Arduanatt is a legendary dream horse born from Mythical Awakening and does not specify a gender.

● Details on Mythical Arduanatt skills are as follows.

● To craft the “Mythical Censer," you will need the following materials.

- The higher the tier of the horse supplied to the imperial house, the greater amount of "Flower of Oblivion" you will obtain. 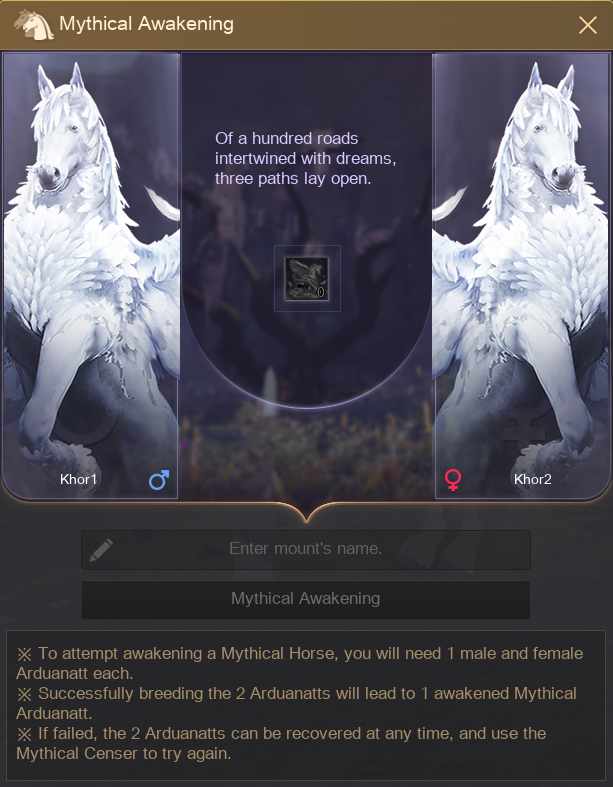 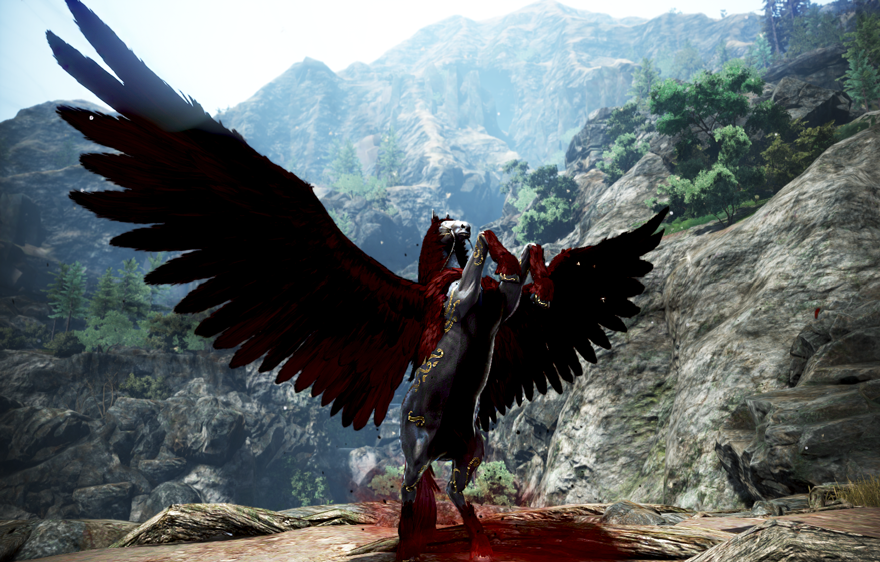 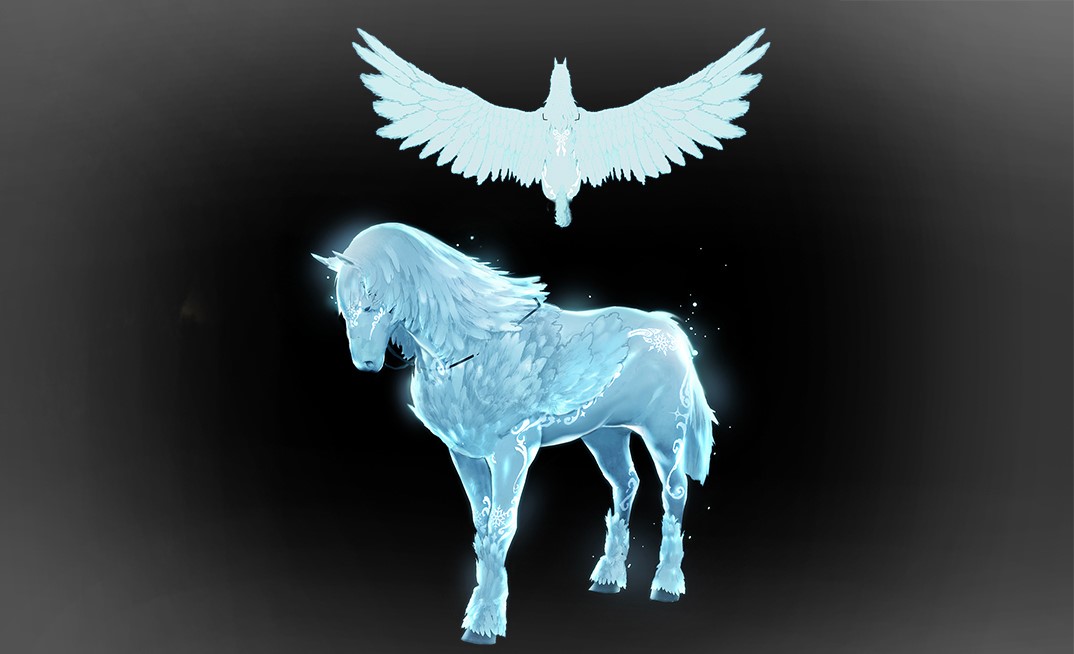 Arduanatt reigns over the skies, Diné rides the desert dunes, and Doom conquers on land. The beauty and power of these dream horses, especially their unique skills, have been longed by many adventurers over the years. However, over the years, many adventurers have been able to tame them and a greater number of adventurers have sought for a new type of dream horse. Thus, we present before you a dream horse of even greater magnitude in both power and beauty. We hope this provides a new goal for adventurers who enjoy horse training and dream horse content. We particularly hope this is also a more meaningful endeavor for those high-leveled trainers as well. While we only have the Mythical Arduanatt to show for today, we are currently preparing to release an upgraded Diné and Doom as well.

- Now you will roll not 1 but 2 dice and their sum will determine how many spaces the Black Spirit moves forward.

- Getting the same number on the dice will automatically grant you another roll.

* However, an extra roll will not be granted if you land on a bonus square or the finish line, or if you roll the same number on both dice for the second time.

- Your Black Spirit piece will change appearances every 10th round completed. 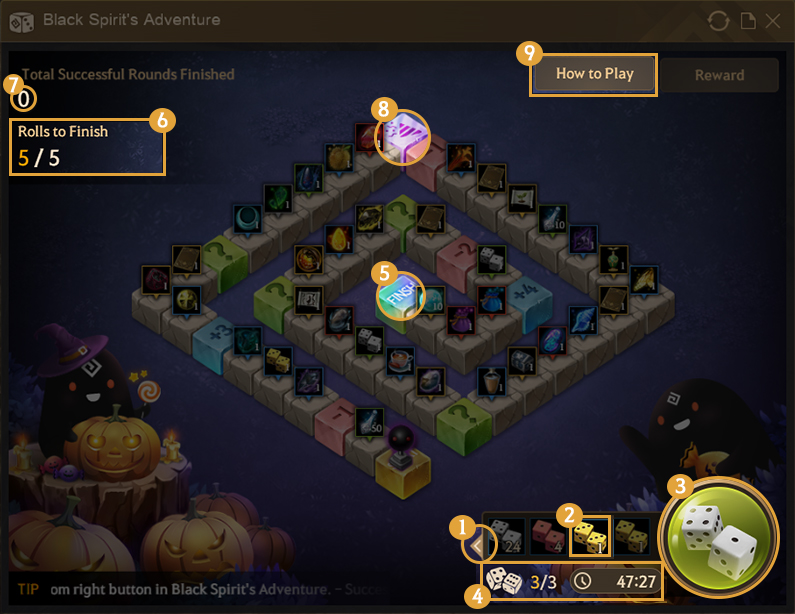 ● Added rewards for round completions of the Black Spirit's Adventure.

※ There are no rewards for additional completions of Black Spirit's special boards.

● Added rewards for failed completions of the Black Spirit's Adventure.

Black Spirit's Adventure is one of our most beloved contents. We chose to revamp it by retaining much of the accessibility in its original variation, while adding some strategic elements to spice up the fun.

- Naval Fame is shared across the Family and measures the adventurer's Karma at sea.

- While in pirate status, your ship will be marked in red, allowing you to be attacked by the ships of adventurers without activating PvP mode.

- Each time you force PvP by attacking an adventurer, your first attack will reduce your Naval Fame by -50,000.

- You can no longer ride the Guild Galley if your Naval Fame is in pirate mode.

- The act of defeating an adventurer, after destroying a ship, will reduce your Karma not Naval Fame.

- You can restore your Naval Fame by defeating Sea Creatures. 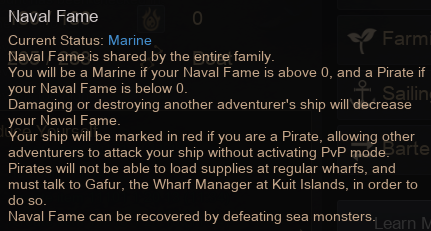 The Naval Fame system has been added as a new content. This will serve as the foundation for our pirates and bounty hunting system. Defeating sea creatures will increase your Naval Fame, while attacking other adventurers and their ships as a pirate will reduce your Naval Fame. If your Naval Fame is below 0, you will be severely limited in your access to sea-related content. Also, please note that Naval Fame is applied to your entire family. We are currently preparing future contents so that different roles can be played by adventurers in Naval Fame without being unfair to one particular side over the other.

● Increased the number of Red Seals obtainable from losing in the Red Battlefield to 2 seals.

● Re-adjusted skill add-ons for all classes.

We've improved the skill add-ons for each class. Previously, you chose 2 out of 6 given add-ons and added them to your character's skills, but now you can choose the add-ons you want from 24 add-ons (shared across all classes). The limitations of the previous system led adventurers to approach the add-ons as if there was a correct formula to use them, but with this renewal, we hope that adventurers will be more experimental in their customizations of their skill add-ons according to their play style. Also, before we had grouped our skill add-on effects into 5 levels (for example, the amount of Monster AP increased differed depending on the skill) based on the skill's cooldown time and utility, but now we've reduced it to 3 levels in order to increase their utility. Additionally, we've made adjustments based on adventurer opinions on how the skill add-on effects were being applied to all hits for certain skills.

● Fixed the issue where the target of a successful grab skill would sometimes display irregular movements.

● Night Crow - Fixed the issue where using the skill while consuming Shards of Darkness after having learned Crow Food II, Storming Crow II and with Storming Crow II locked would display irregular movement.

● Fallout - Fixed the issue where the skill's add-on effect wouldn't activate when the skill was on cooldown.

● Spiral Cannon - Fixed the issue where the skill would only apply 6 hits instead of 7.

● The Ancient Fragments of the Ancient Puturum that emerges from the Dark Rifts have begun to emit even stronger energies.

- Changed the active region where the Ancient Puturum protect the Ancient Ruins and their legacy to Valencia's desert only.

- Defeat the Ancient Puturum from the Dark Rift to obtain Mass of Pure Magic and Howling Dead Man's Chest.

● Moved the sailors waiting for their captains at the tavern in Velia so that they wouldn't interfere with the tavern business.

● Added additional quests to obtain the Royal Fern Root, one of the materials required for awakening the Mythical Arduanatt.
- Details regarding the quests are as follows. (Last Updated: 10/28 13:59)

● Renewed the design of the Settings window that appears when you create a character and log in at the start of the game.

● Fixed the graphical issue with some regions in front of Balenos.

● Fixed the issue with incorrect font color being displayed after line breaks in certain chat messages.

● Fixed the issue with the message that appears when using the Battle Command to Gather.

● Fixed the issue where the caution message would sometimes not appear when enhancing your equipment.

● [Archer] Fixed the issue where the Ra'ghon and the Crossbow would sometimes disappear when performing certain actions while wearing the Crayodel Outfit.

● Fixed the issue where the node guild information did not fit in its window while viewed on the World Map.

● Fixed the issue where the Chat window size decreased when you loaded a preset with Quick Hotkeys.

● Fixed the issue where characters would sometimes get stuck within trees in some regions of Longleaf Tree Sentry Post.

● [Shai] Fixed the graphical issue that occurred when wearing the Marine Romance outfit with the tied-up hair customization setting.