Here are the updates made to Black Desert on December 2, 2020.

Event 1. Korea vs. Taiwan, Hong Kong, Macao Who will be the World Conquest Victor ?

● Fleeing from the guards' pursuit, Morden Fawner has vanished into thin air.

● Changed Challenge completion date for "A Mysterious Invitation!" to Dec 5, (23:59) where you can receive the Invitation of S.

What is a Family Inventory?

Family Inventory is a convenient bag that all characters in the same Family have access to. However, only consumable items listed below can be placed in the Family Inventory.

– Please note that the below items cannot be moved to the Family Inventory.

3) Items purchased from the Guild Shop

- The quest can be viewed in both Quest List (O) - Recommended tab and [Lv. 60] Bag of the Stars in the New Quest tab. Quests related to Shakatu’s hidden gifts will not be shown separately.

- This quest is only available once per family.

Over the past few years, we've had many voices from all over the world requesting a Family-shared inventory space. We thought having the Maid/Butler system and the addition of the Central Market would satisfy this need, but the requests were still frequent. So we decided to finally add the Family Inventory. However, only certain types of items can be placed in the Family Inventory. You can obtain the Family Inventory via a quest, which will start you off with 2 slots and 100LT. Slot expansion coupons can be purchased with Pearls and Loyalties. 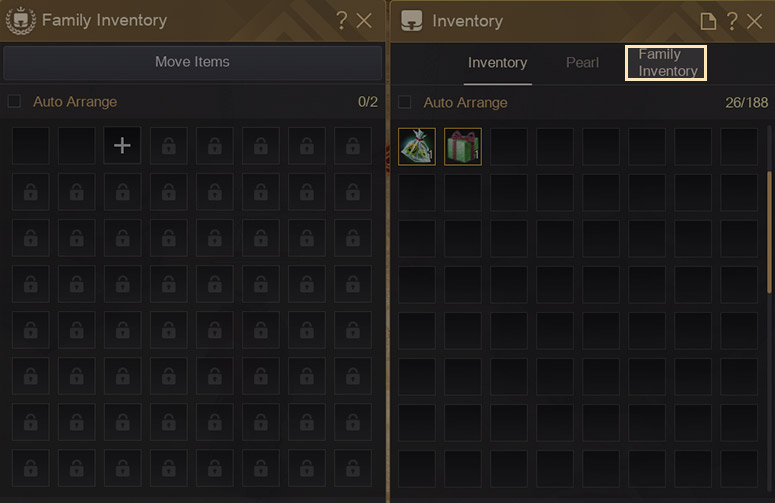 ● All remaining Autumn Season characters who've yet to convert will be converted to regular characters.

- All unaccepted nor incomplete "Season-related quests" will be deleted.

- Adventurers that have yet to complete the quest “[Season Server Graduation] Into the Big Wide World” will receive the following items in their Mailbox (B) - Gift Box Full of Memories, Fughar's Letter of Encouragement, [Season] Tuvala Conversion Stone Box.

● You may use the Tuvala Conversion Stone for each corresponding piece of gear until December 9, 2020 (Wed) before maintenance. After December 9 regular maintenance, all Tuvala gear will be automatically converted.

- All adventurers who have graduated from the season may complete the quest "[Perilla's Star] Fughar's Woe" by talking to the Black Spirit {/}.

- Perilla's Star is a special alchemy stone obtainable by season characters who were created during the Autumn Season.

- "[Season] Boss Gear Exchange Coupon" obtained after graduation can now be used after end of the Season Server.

- Graduated characters can now progress and receive special rewards for "Fughar's Secret to Success" whenever they want.

● Changed conditions and time period for retrieving the rewards when reaching levels 60 and 61 with a season character.

- Previous: Can be retrieved by a Season character before December 2, 2020 maintenance

- Changed: Can be retrieved by a Season character before December 9, 2020 maintenance

※ Only Season characters that have reached Lv. 60, 61 before December 2 maintenance, are eligible for retrieving rewards by December 9.

● Fixed the issue with the horizontal scroll when playing a composition in the Compose window.

● Doubled the chance of obtaining Mass of Pure Magic at the Crypt of Resting Thoughts node.

- The chance of obtaining Mass of Pure Magic at the Crypt of Resting Thoughts node is now the same as that of obtaining it at the Star's End node.

● Mass of Pure Magic has been discovered at the Mountain of Division node.

- Added Mass of Pure Magic to the Excavation node.

● You can now use manufacture on La Orzeca Armor with sockets.

- However, you won't be able to use manufacture it if there's any crystals equipped to it, so you will need to extract the crystal(s) first before crafting.

● Guild Boss Ferrid has absorbed the heat of the hottest lava in Omar Lava Cave and become even more ferocious and powerful.

- Ferrid's attacks, which contain the full might of its power, shake the cave and stimulate the unstable lava, causing a destructive explosion.

- When this overflowed lava creates a swamp, Ferrid's attacks will cause explosions and continuously produce Ferrid Talis.

- Ferrid Tali is very dangerous as it approaches nearby adventurers and spits out its lava.

- There's a low chance Ferrid Tuny will appear in the Lava Swamp.

- When Ferrid Tuny reaches Ferrid, it will pass on its energy of lava to the Ferrid, making it more powerful.

- When the Grapple or the CC status effect is applied to Ferrid Tuny, it will immediately vanish, but if it's near Ferrid at this point, it will still be able to pass on its lava energy to the Ferrid.

- As Guild Boss Ferrid has become more powerful, the chance of obtaining Energy of All Creations has increased as well as the drop rate of other loots.

● Added a new function that can transport mounts to where the adventurer currently located.

- You can transport mounts held in another Wharf/Stable to the current Wharf/Stable. Guild mounts are excluded from this function.

- Transporting a mount costs 1 million silver and will take 10 minutes to complete.

- Transporting mounts with trade or barter goods in their inventory have a certain chance to lose all those items, so please take note.

- Large ships cannot be transported to areas they cannot traverse to (i.e. rivers).

To bring a mount in a different region, you would previously have to log onto a different character located close to where that mount was stabled to send them to your current character. We've created this function to address the incovenience of the existing method of transporting mounts.

After the introduction of the Naval Fame system, many adventurers found themselves unable to retrieve their ships from certain wharfs due to the drop in their Naval Fame. Now, with this function, adventurers with ""Pirate"" Naval Fame can still transport their mounts stored in other locations to the Kuit Islands.

● Changed placement of moving Calpheon Protesters so that they are not too close to the residence.

● Changed placement of Kansha in Pit of Undying so that he doesn't obstruct matches.

● Fixed the issue where vegetation would be placed abnormally in North Kaia Mountain and Olun's Valley.

● Winter is here in Black Desert, along with heavy snowfall and beautiful auroras.

Heavy snowfall and magical auroras have come to Black Desert.

We wish you a happy, albeit cold, winter season in Black Desert.

● Changed NPC and monster spawn location for Valkyrie Succession Quest so that it is more convenient to complete. 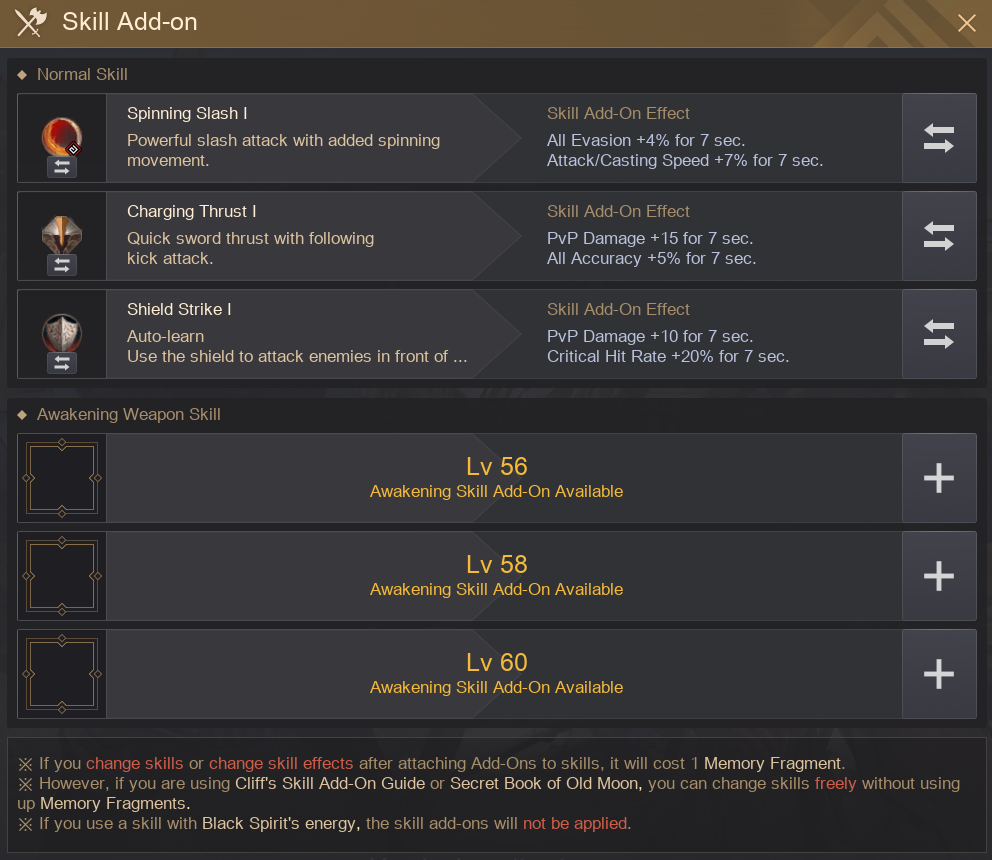 ● Fixed the issue where effects would remain on screen when opening inventory after closing Mount Information window by pressing ESC.

● Fixed the issue where placing furniture in parts of the Velia 2-3 residence wasn't possible due to irregular objects.

● Fixed the issue where Transfer Ship wouldn't display the amount of time consumed.

● Fixed the issue where opening Marni's Research Box obtained by defeating Valencia Guard Captain would give Marni's Stone from another hunting ground.

● Fixed the issue with the residence's function appearing abnormally in World Map (M) Residence UI from time to time.

● Fixed the issue where the slot background for the Alchemy Stone Growth menu would be displayed abnormally.

● Fixed the issue where the Anvil would not be repaired occasionally with a error message.

● Fixed the issue where the item quantity input window would not appear occasionally when Sticker UI was enabled in Inventory (I) window.

● Fixed the issue where furniture could not be placed on the floor of Bartali Farm 1-1 Residence.

● Fixed the issue where Ash Sap quantity required for crafting Magic Crystal of Infinity - Armor in '[Alchemy Lv26] A Crystal That's Missed' quest description differed from the what was described in crafting notes. Both descriptions have been changed to Ash Sap x4 for consistency.

● Fixed the issue where Finding NPC function in Serendia Shrine to locate the nearest General Goods Vendor would guide the player to an incorrect location.

● Fixed the issue where the NPC for quest progression would not appear when enabling Hide NPC and proceeding with "Mysterious Painting 1: Restored Drawing" quest.

● Fixed the issue with Quest Sort Settings that wouldn't work properly after reconnecting.