"Warriors who bear the thorns, you are the living embodiment of Quturan.

As long as you remain living, Orzeca is eternal."

Is there any other word that presses down on your heart like “eternity?”

Father, I have rediscovered the story about the kingdom long gone,

the story you never got to tell me.

It was in the Promised Land, abandoned by the God of Light.

The story of High Priestess Echidna that led the abandoned children to the root of Quturan.

"The thorn is the gift bestowed by the goddess with eternity as its condition."

Echidna’s children slaughtered their enemies with the weapons that manifested from the thorns of Quturan that wrapped around them.

and ushered in the glorious golden age for the ancient kingdom,

I went down to the dead root of Quturan, following Echidna’s steps.

"Only the good children that overcome the trial can become the queen of thorns. "

As I went farther down, the smell of blood and... something burning pierced my nose.

But was I mistaken? With the smell came Echidna’s whispers in my ear.

I suddenly found myself opening my eyes, with my body soaked in cold sweat.

I could not remember how I escaped that place.

But father, I suddenly remembered the night of the last star we saw together in Calpheon.

"Forgive me for my sins"

You said, as you handed me the golden key, decorated with eagle wings.

"Forgive me for forcing you into this eternal struggle."

This was the first and last time I saw tears in your eyes.

I couldn’t understand, but you felt so distant.

So, I buried the key deep into my heart.

"Do not forget who you are. You are my one and only Francesca Seric."

" Axian, the King of the Dead"

The last king of the ancient kingdom bears the bloodstained crown, even after death.

He waits for the Queen of Thorns to deliver his salvation.

Father, I reread the history of the ancient kingdom every time I had a nightmare, which started from the day I followed Echidna’s steps down to the root of Quturan.

I gathered the abandoned followers to form an army and waited for the fateful day.
The day I would reclaim the throne as I planted the young branch of Quturan.

The cold star shall arise once more over my kingdom of Calpheon.

However, my nightmare became a reality before the promised day came.

The girl I saw at the root of Quturan, whom I did not even believe to be real, found me.

With the power of the distorted goddess in life and death,

I seek to reclaim what is mine.

Is she the goddess’ trial that Echidna mentioned?

No... Is she the fruit born by the sins you confessed father?

My name is Francesca Seric, the rightful heir to the kingdom of Calpheon

She has my face, my voice, my memories, my emotions...

She wields the Morning Star and emanates the chill of the distorted goddess.

Father, pray to the goddess that I may reign victorious,

for I cannot back away from this duel.

Only the one and true heir to the throne will survive and possess the holy tree’s thorn. 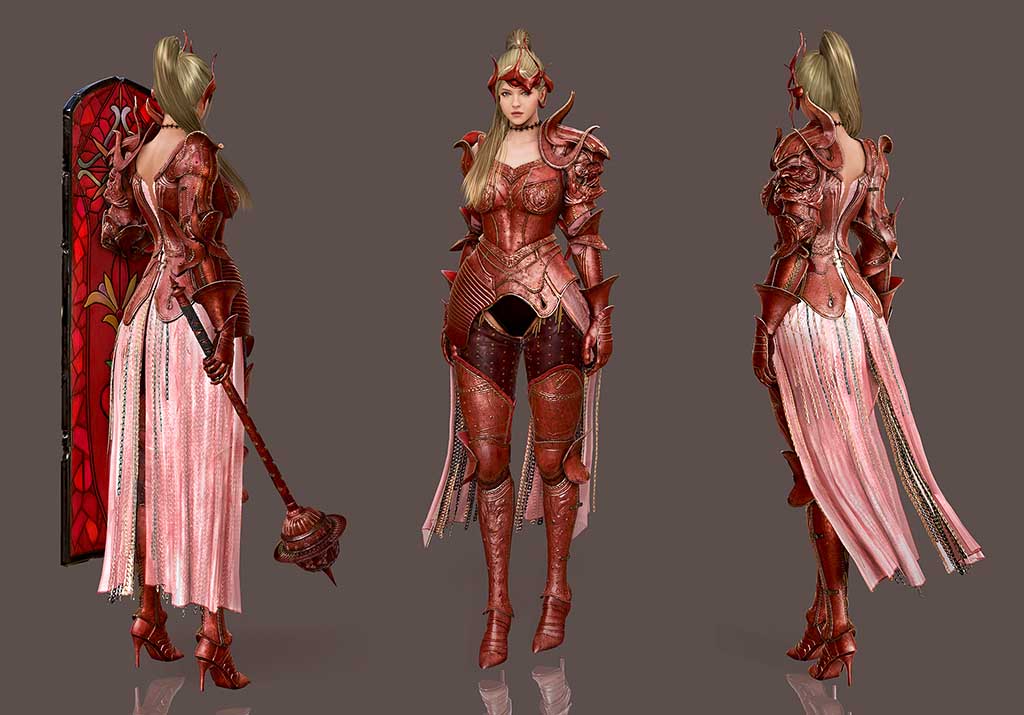 Nova gained a new form of power by making a pact with Axian, the King of the Dead, through the Thorn of Quturan.

Summoned by sacrificing Nova’s vitality and her Thornwood Guards, Axian is a gigantic and ghastly undead creature with wings and horns that brings death to the land of the living.

Axian can simultaneously attack from the sky above and recover Nova’s HP and SP as it taints the Morning Star black.

Nova can swiftly move across the battlefield more than ever as her new guards bring destruction to anyone who defies her.

Nova is capable of exerting vast control over a large battlefield as she dominates the fight through her command of Axian.

Nova in Succession continues to make most of her Morning Star and Quoratum to deliver heavy blows to her foes in a balanced combat style.

Her growth in strength can be especially seen in enhanced movement skills along with more diverse combos available between skills.

However, the most notable development in Nova’s Succession can be seen in the summoning of her new guard "Axian”.

Axian will recover Nova’s HP & SP whenever she uses a skill and it will also dive into a state of frenzy if it feels that Nova is in danger. 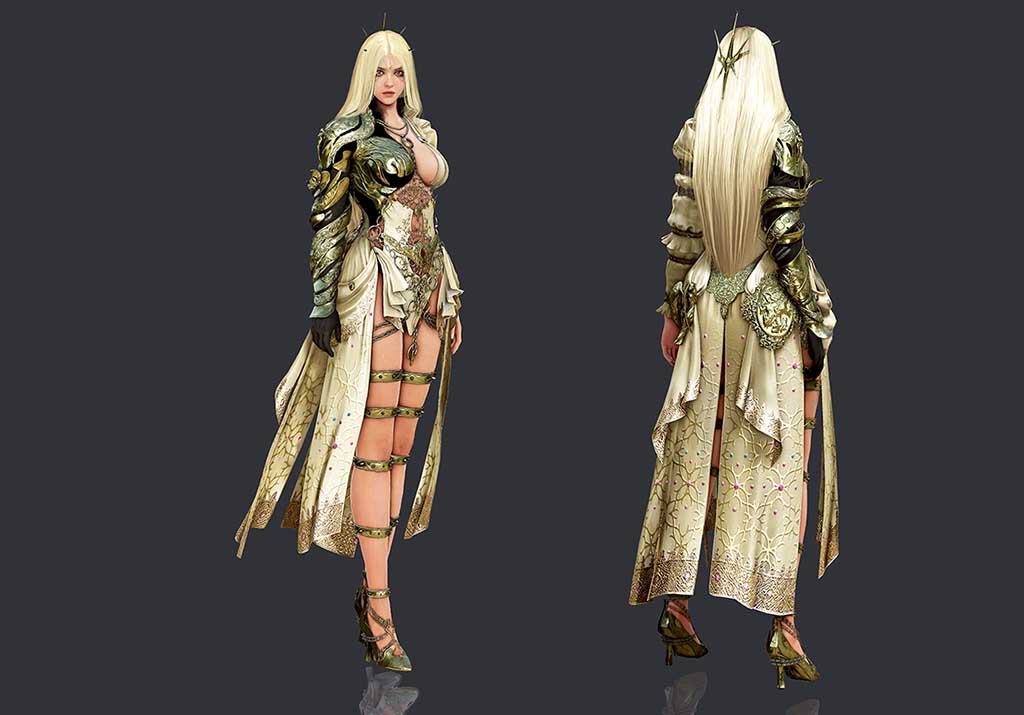 Nova acquires Sting from the duel. This weapon was manifested by the thorn of Quturan and empowered by the distorted goddess. She wields it freely and slaughters her enemies with it.

Sting’s wielder can switch its form between a sharp sword and formidable scythe.

Sting in the sword form is a rapier-like weapon with quick piercing attacks, while her attacks in the scythe form are ring-shaped strikes making it difficult for enemies to predict her movement.

The Awakened Nova also acquires a special resource called "Star's Breath" when she successfully hits her enemies during combat. Once she has amassed the full extent of these resources, Nova's skills are enhanced allowing her to unleash faster and more powerful forms of her skills.

Becareful to not get mezmerized by the grand Queen of Thorns.

Awakened Nova switches gears with Sting, the thorn of Quturan that wraps around her arm and forms her weapon.

Sting’s standard form is like a rapier, so many of her awakening skills revolve around Royal Fencing.

Additionally, Sting can transform into a formidable scythe and it enables her to hit a large area.

Awakened Nova’s major trait is "En Garde” and the incredible boost of speed it gives her.

She gains “Star’s Breath” with every skill she uses, and this resource is used to go “En Garde” and give her explosive speed.

When she enters “En Garde,” all her awakening skills are enhanced.

Nova's Succession & Awakening update will be released on January 6, 2021!

View list
Comments 33
Tidhurr
Lv. 63
EXCITED! O.O <3
1
Kismiiz
Lv. 60
and i thought she will be a summoner at awakening style
2
Aerisha
Lv. 59
@Kismiiz Yeah i thought so too..like chaos legion
0
Kyrinth
Lv. 61
awakening dk hello?
1
Aerisha
Lv. 59
@Kyrinth Lol...yeah..even the skill effect color is the same
0
Lalaina
Lv. 58
@Kyrinth if you read her story, her father came back from Odyllita, where DK home is. it's kinda obvious from the start that it's powers are similar to Vedir. Although it has its uniqueness.

4
IAerialI
Lv. 62
@Lalaina WAIT A MINUTE.
no man in Odylita.
0
Agai
Lv. 61
HAPPY NEW YEAR 2021 ALL !!
1
Catharsys
Lv. 60
When it will release ?
0
Catharsys
Lv. 60
THAT AWAKENING SWORD WAS SO FAKIN LIT
0
Keicho
Lv. 62
err, cant see why the leak's internal name is "gauntletSwordScythe" according to poli,
that's clearly a rapier
0
Xienthel
Lv. 63
@Keicho polifangaes
1
Cirillus
Lv. 61
@Keicho Poli got Bamboozled hard
0
Tsugume
Lv. 61
@Keicho Well it's a gauntlet 'Quturan that wraps around her arm and forms her weapon. ' she using a weapon of blades, that shit form a scythe
0
Kyouru
Lv. 52
@Keicho Because poli is sh*t, feeling famous noob youtuber.
2
Lalaina
Lv. 58
@Kyouru but what poli said is true though, from the video itself, it is a gauntlet then she forms her weapon like rapier, then it can transform into a scythe so that means it is "Gauntlet Sword Scythe" I dunno why you speak ill of him and he don't do youtube
for you, he do youtube for those who need it.
2
Eleanor
Lv. 62
DK 2.0 with additional power from sorc. I'm in!
0
IAerialI
Lv. 62
@Eleanor me too
0
IAerialI
Lv. 62
DK 2.0
0
MeisterBlank
Lv. 61
daan ko pa lagi summoner..
0
Sardior
Lv. 59
so excited
0
SniperGunkyun
Lv. 61
love me
1
Auraenys
Lv. 61
I'm just here for her hair. O M G.
0
Gelo
Lv. 63
@Auraenys Your DK will have a sister :)
0
WarGrace
Lv. 63
Nova awakening combination of Sorceres and Dark Knight = Dead class
0
Hyakkihime
Lv. 60
She's so hot omfg ♥
0
SolaUii
Lv. 62
Aw mannn
Nova awakening looking amazingggggg
0
HwangSeoYeon
Lv. 61
pre-awk/suc nova = valkyrie + striker
awaken nova = DarkKnight + Sorcerer
0
Ashlin
Lv. 59
Finally Lancelot in black desert
0
The1st
Lv. 62
Fix that Crotch Window now PA. The costume overall was good until I saw that thing.