● When morning dawns, the chickens at Bartali Farm begin to escape.

- You can accept and complete this quest from Emma Bartali at Bartali Farm every 4 hours.

- When morning dawns in the world of Black Desert, 10 chickens will fly the chicken coop at Bartali Farm.

- Runaway Chickens are easily scared and will flee if you get too close.

- You must approach them while sitting and wait until they lay an egg and flee.

- You can interact with the egg to obtain one, which has a chance to turn into a Golden Egg as well. You can exchange these eggs with Emma Bartali.

- Once a chicken has laid an egg twice, it will no longer have the energy to flee. Capture it and bring it to Emma Bartali to complete the quest.

※ You cannot catch additional chickens if you already have a Captured Chicken in your inventory.

※ The chickens will disappear if you do not catch them within 5 minutes of their escape.

it won't have the energy to run anymore

● Added the quest "Runaway Chicken in the Bartali Farm" to the Recurring quest tab.

● Increased the amount of Skill EXP gained from the Red Battlefield permanently.

● Added the quest to graduate from the Winter Season. You can accept and proceed with the quest as follows.

- Accept the quest "[Season Server Graduation] At the Crossroad" from Leyla in Velia.

- Accept and complete the above quest, then accept the quest "[Season Server Graduation] Into the Big Wide World" from Fughar.

- Use the "Honorable Adventurer's Certificate" obtained from the above quest to complete the quest and graduate from the season server.

● Added the quest for adventurers who have graduated from the season to exchangeTuvalagear for Boss gear.

- This quest requires a season-graduated character who has a "[Season] Boss Gear Exchange Coupon" in possession, who will then be able to accept the quest from Fughar to exchange for the appropriate weapon or gear. Please note that you can choose to accept and complete this quest only once.

- Once you've accepted the quest, go to Tranan Underfoe with the exchange coupon and Tuvala gear to exchange them for a Boss gear of appropriate enhancement level.

● Set the basic AP of all class summons to match the summoning class's AP.

● Core: Violation - Fixed an issue where weapons appeared unnatural when using the skill.

● Fixed the issue with Combat Assistance not functioning correctly when using certain skills.

● Fixed the issue with the Shai's movements after jumping to the left/right.

● Prime: Ridge Reaver - Fixed the issue where the skill's critical hit rate increase effect wasn't being applied as intended in certain situations when using the skill.

● Descent - Fixed the issue where using the skill via Quick Slot during Awakening would sometimes prevent Main Weapon skills from activating.

● Prime: Dune Slash, Prime: Descent - Fixed the issue where using the skills with Combat Assistance toggled on would prevent the skills from activating as intended. 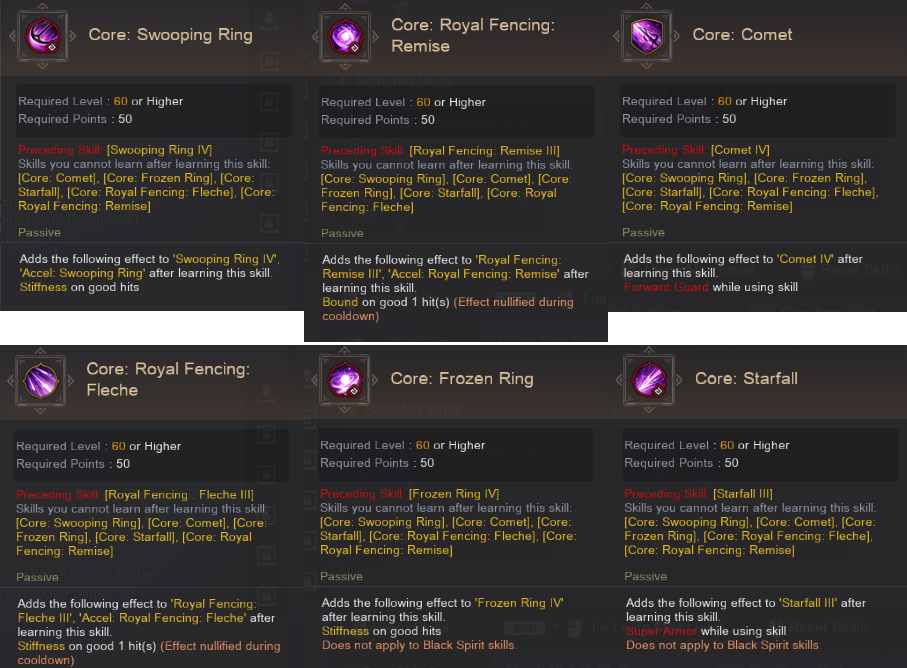 ● Added Rabam's Enlightenment - Skill Enhancement.
- You can learn the 1st Skill Add-on at Lv. 56 or higher, the 2nd at Lv. 57 or higher, and the 3rd at Lv. 58 or higher.
- You must have learned the preceding skill(s) to learn a specific skill add-on.
- You can choose 1 out of 2 skill add-ons per level.

● Increased the damage of the following skills.

● Prime: Swooping Ring - Changed the skill by removing the 1st hit, and the skill now applies all hits at its last hit.

● Prime: Quoratum's Ascension - You can now combo into the skill if used after Prime: Vengeful Star's 2nd hit.

● Prime: Bitter Reign - You can now combo into the skill if used after Prime: Stamma's Mate.

● Prime: Vengeful Star - You can now combo into the skill's 2nd hit if used after Prime: Frozen Darkness.

● Prime: Stamma's Mate - You can now combo faster into the skill if used after Prime: Quoratum's Ascension's 2nd hit.

● Punishing Trap - Improved the skill to now stop faster by pressing the S key right after the skill's surface hit.

● Punishing Trap - Improved the skill to combo faster into other skills when its extra hit activates right after the skill's surface hit.

● Countergambit - Increased the charging movement speed after hitting a target with the skill.

● Added an additional effect to indicate Nova's HP being consumed to command Axian.

● Fixed the graphical issue with the quoratum while attempting to tame a horse.

● Added a new quest to increase the weight of your Family Inventory by 50LT. Adventurers who've completed "[Shakatu's Gift] Bag of the Stars" can accept either "[Dellus' Gift] Shakatu's Message" from Dellus or "[Raomi's Gift] Shakatu's Message" from Raomi nearby, then complete the quest to receive the reward.
- You can only complete each quest once per family.
- You can choose to proceed with either Dellus' Gift or Raomi's Gift.
- While both quests share the same quest objectives and reward, you will obtain a different title upon completion.
● [The Great Expedition] Oquilla's Eye quest now requires you to be level 50 or higher and will appear in the Suggested quest tab when talking to the Black Spirit while in Balenos.
● Fixed the graphical issue with the name of Richie, the jester hailing from Heidel whom you meet during the Velia Main Quest on top of the ossuary, overlapping with his prison cell.
● Added 1 Bronze Key to the reward for completing [Boss]Giath, the Goblin Chief.
● Fixed Alustin to no longer offer the Adventure and Knowledge Research dialog option while proceeding with the Main Quest.

● Fixed Curse of the Ossuary's navigate function to now lead you to Houtman.

● Changed the quest text for Excavation Site to present the quest objectives more clearly, and now requires you to talk with the Goblin Overseer "Santorian".

● Changed the quest text for [Awakening] Traces of Edana to present the quest objectives more clearly.

● Fixed the images of knowledge gained from interacting with the monuments behind Edan in the Ancient Stone Chamber to now display correctly.

● Fixed Tiny Nose to no longer offer the Secure the Trade Route dialog option while proceeding with the Main Quest.

● Fixed the Luxurious Treasure Chamber knowledge so you can now learn it even after proceeding with the Main Quest.

- After completing the Serendia Crossroad quest [Crossroad] Each of Their Reasons and the following quest [Boss] Biraghi Den Keeper, speak to Etunar, node manager of Biraghi Den, to learn about [Knowledge] Luxurious Treasure Chamber.

● Fixed the issue where the quest Processing Expert #5, Finally... wasn't proceeding correctly, and made corrections to the quest objectives and quest accepting text.

● Fixed the dialog for Noah Akam in Abun to begin more naturally during theMediahmain questline.

● Fixed the quest The Gift of Calpheon so upon completion, you can naturally speak to Nella Encarotia once again.

● Fixed the Wizard's Altar so upon interaction, you will no longer see the same dialog repeat over and over again.

● Fixed [Awakening] Artifacts of the Naga, one of the crossroads quests in Serendia, so upon completion, Edan doesn't suddenly vanish, but remains a bit longer to continuetoexamine the Extraction Mill.

● Fixed the issue where Nellamorin,NodeManager of Behr Riverhead, would have her face covered by plant life.

● Changed the locations of the exit and help buttons on the Old Moon Grand Prix results window.

● Fixed the Knowledge (H) window to now save the most recent knowledge selected up until you log off and on again.

● If you have unclaimed Pearl's Blessing rewards, you will now see a notice displayed when you try to exit the Pearl Shop.

● Fixed the issue where certain plant life of the Terrmian Cliff appeared to move irregularly.

● Fixed the issue of floating objects outside certain Gahaz structures.

● Fixed the issue where upon changing your font size, certain system messages relating to quests already completed would sometimes be displayed.

● Fixed the issue where the mouse cursor wouldn't change when hovered over the text input slot in the character/family name change window.

● Fixed the issue where the mouse cursor would change when hovered over the cancel button in the character/family name change window.

● Fixed the issue where upon mounting the race horse Giorga Brisa, your speed in the desert wouldn't decrease. You cannot accelerate nor sprint as fast as a regular horse while mounted on Giorga Brisa in the desert.

● [Mystic] Lupine Outfit - Fixed the issue where equipping the vambrace after having donned the outfit would remove any dyes set to the outfit's cape.

● [Dark Knight] Eclipse Outfit - Fixed the graphical issue where upon sitting after having donned the outfit, her undergarments would be exposed outside the outfit.

● Fixed the issue where Agris Fever points were consumed incorrectly when defeating summoned monsters while in a party.

● [Female Classes] Fixed the issue with the LahrArcienEyepatch not appearing on certain classes when equipped together with the Desert Camouflage outfit.

● [Maehwa] Bloody Outfit - Fixed the issue with the weapon being placed in an awkward location with the outfit equipped.

● Fixed the issue with Music Album title being displayed as Compose/Score.

● Fixed the issue with Compose title being displayed as Music Album by changing it to Compose/Score.