In order to help newer Adventurers set off on more meaningful adventures, a special “Guild Gear Rental” system will be activated!

With the release of Sage – our newest class – on March 24, we’re sure many Adventurers are wondering about the start of a new Season. While we do plan to continue improving and providing Season Servers, unfortunately, there will not be an upcoming Spring Season. We understand Adventurers who waited for the new season will be disappointed by this news, so we want to share what we’ve prepared to help new/returning Adventurers with the release of Sage.

We’ve always put a lot of consideration into how to make it easier for new Adventurers or friends of existing Adventurers who are starting for the first time to adapt to the game and find more enjoyment.As a result, we've tried many different avenues to address this in a way that fits Black Desert’s style. First starting off with the introduction of the Olvia Server, then moving onto the Cliff’s Weapon Series, Suppressed Gear, Horse Rental, Oasis Gear, PEN (V) Capotia Series, and the Season Servers that started last year.

Nonetheless, as our service continues, we’ve increasingly received feedback saying that new Adventurers face greater difficulties adapting to the game. Of these difficulties, the topic of gear progression is something we discussed and considered internally. One of the results of these discussions is the upgraded version of “Suppressed Gear” -- the “Narchillan” gear. Narchillan gear is similar to DUO (II) - TRI (III) enhanced Blackstar gear and is relatively easy to obtain as you exchange the familiar PEN (V) Naru gear for it.

Additionally, we’ll be adding a Guild-based Item Rental feature, akin to the existing horse rental feature. So, how does it work? Anyone in the guild can put storable items into the Guild Rental Storage, and someone who needs the item can ask to rent the item from its owner. Rented gear can be used exactly like normal gear, but will be returned to the owners in their original state once the event period ends. (E.g. If you enhance a TRI (III) Kzarka Longsword with Caphras Stones, the Caphras enhancement will revert to their original state once the event ends.)

This event is meant to foster an environment where Adventurers can help friends or new guild members. Nevertheless, we want to ensure this event won’t be exploited or abused, so we’re only allowing Adventurers with a total character level of 150 or below to rent gear, and only TRI (III) - TET (IV) level gear will be rentable.

Event. Renting Items With Your Guild!

Adventurers, we discovered an issue where the “Renting Items With Your Guild!” did not end as scheduled on April 21 (Wed). As a result, we’ve extended this event by one week.

Please plan your gameplay accordingly. We apologize for any inconvenience caused by this sudden change. Thank you for your understanding.

* Any items rented before the April 21 maintenance were returned to the inventories of their original owners.

① During the event, you can rent out your items to guild members or rent guild members’ items through the Guild Gear Rental Storage.

- You can view the Guild Gear Storage from the in-game Guild (G) menu.

How to view the Guild Gear Rental Storage page!

- Any guild member with a total character level of 150 or below can rent the gear below.

While you can rent gear regardless of your Karma, you cannot equip the rented gear if your character’s Karma drop below zero. (If your Karma drops below zero while you have rented gear equipped, it will not downgrade in enhancement level if you die. Additionally, you will not receive the effect of the equipped gear.)

* Once the event ends, the rented item will be returned to the owner's inventory in the state they were when they were first rented out.

* All transfused Crystals will disappear, and Caphras Stone enhancements will not be carried over.

* If rented items are branded, the branded state will remain until the items are returned.

② Adventurers who wish to rent out items can register them to the “Rental Storage.”

- Please note that you cannot withdraw items until the end of the event once they’ve been registered, so be careful! 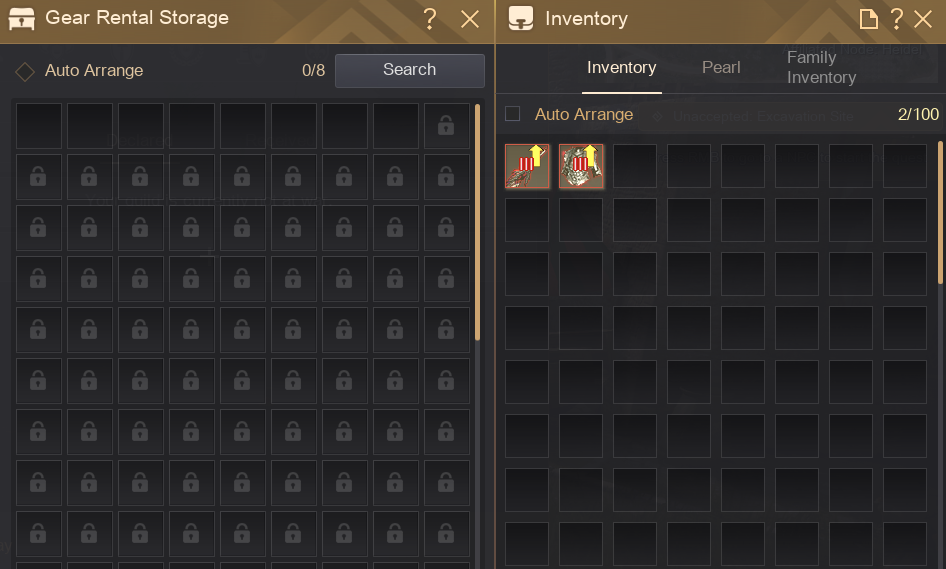 ③ The Adventurer who registers the item must give approval before registered gear can be rented.

- In order to approve a rental, the approval button must be pressed in a fixed window of time, so if the Adventurer who registered the item is not online, then the item cannot be rented.

④ Once the event ends on during the maintenance on April 7 April 21, 2021 (Wed), all rented gear will disappear and be returned to the owner’s inventory. All returned items will be returned in the state they were in at the time they were first added to the Item Rental Storage.