● Made improvements to mitigate the issue where your character would sometimes move abnormally when participating in the Old Moon Grand Prix.

● Increased the maximum number of slots available in your Family Inventory to 48.

● Added Sage as a Trial Character.

● Black Spirit: Violation - Fixed the issue where you could use the skill even after it was locked.

● Lightning Blast - Reduced some of the shaky camera effects.

● Heaven's Echo - Fixed the issue where you could not add and use it via Quick Slot.

● Core: Spirit Hunt - Fixed the issue where your character moved abnormally when using W + RMB while the skill was on cooldown after switching to your Main Weapon.

● Prime: Rift Chain - Changed to now apply Super Armor when the skill is used on cooldown.

● Flow: Finishing Touch - Added a 17 second cooldown to the skill.

● Kyve Mastery - Changed the skill to stack the effects of Prime: Overdrive for the following situations:

● Reduced the PvP damage of the following skills:

● Radiant Annihilation - Added an All Accuracy +9% for 10 sec effect when the skill is used.

● "Resurrect at the closest Safe Zone" will now resurrect you near the quest zone if you died at Protokea during Sage's Awakening questline.

● You can now exchange [Event] Kagtum Rider's Claw for other items by visiting the NPC Elmos Berry.

● Added a weekly quest where you can obtain Elvia Ancient Spirit weapons as a reward.

- You can complete the weekly quest to choose a Main weapon box, an Awakening weapon box, or a Sub-weapon box as your reward. But these boxes will expire 3 hours after you claim them, so use them quickly!

- If you open the Elvia weapon box, you'll obtain an Elvia Ancient Spirit weapon that can only be used for 10 minutes.

- You must first complete the quest "[Elvia] Obsidian Ashes" before you can accept the weekly quest from Lejenti in Glish.

- This weekly quest can only be accepted by Lv. 60 or higher characters on the Elvia Realm server.

- Since this is a weekly quest, it will reset 7 days after you complete it (at midnight).

● The objectives for the following quests in Elvia Realm have been changed:

● Added the "Repair Horse Gear" function to the Camping Anvil.

● The NPC Lindby of Iliya Island will now be marked with the Stable Keeper icon on the World Map (M).

● Changed the pet type classification from "LIMITED" to "RARE."

● Added a feature to see the name of the dyes used by hovering your mouse over a specific gear slot in the Dye (J) window. 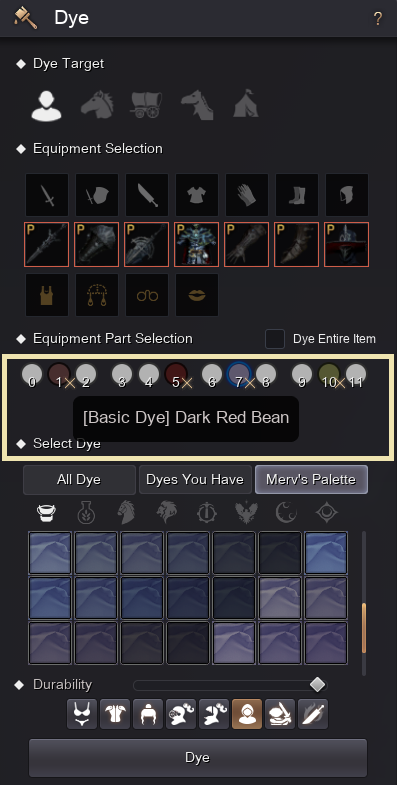 ● Guild Member Protection has been changed to allow protected guild members with negative Karma to be attackable by opposing guilds during Guild War.

- Guild A and Guild B are engaged in a Guild War

- Adventurer [A1] is protected by Guild A

In this case, any member of Guild B can now attack Adventurer [A1].

● Fixed the issue where certain parts of the background appeared awkward in the following regions:

● Fixed the issue where skill descriptions in the Skills window would display keyboard and mouse-oriented text for Gamepad UI mode.

● Fixed the issue where the icon for the Tungrad Earring was being displayed as a Tungrad Necklace in the Crafting Notes.

● Fixed the issue where you could resurrect in the exact spot where you died in the Red Battlefield.

● Fixed the issue where the Processing UI would display abnormally when completing Mass Processing under certain circumstances.

● Fixed an issue where having a Celestial Horse Calling Horn in your inventory prevented your character from calling Guild Elephants to you.

- Guild Elephants within 50m are able to be called to you regardless of whether you have a flute item in your inventory.

● Fixed the issue where reconnecting/switching servers would occasionally cause the Amity of certain NPCs to appear as 0. The actual Amity levels of the NPCs were not changed.

● Fixed the issue where your Karma would not decrease if you hit a character and their ship at the same time with a cannon of a big ship in forced PvP mode.

● Fixed the issue where the quest "Crippling Fear," part of the Drieghan main questline, wouldn't display in the Main tab of your Quests window.

● Fixed the issue where pressing certain buttons on your gamepad would open the "Withdraw Silver" window while Processing via Storage with Gamepad UI mode.

● Fixed the issue where an Adventurer that bought annexes for Node/Conquest War could still install the annexes even though their position in the guild was changed.

● Changed the key guide to display the correct key for toggling (lock/unlock) ship and wagon skills when using the Gamepad UI.

● Changed the toggle for locking and unlocking ship and wagon skills to be togglable with a gamepad when using the Gamepad UI.

● Fixed the issue where the icons of the [Event] Magical Draught series of items were not being displayed in the Crafting Notes.

● Fixed the issue where trying to close the game after using the [Practice] Lynch Cannon caused the game to shut down improperly.