Revisions to the June 2 Update Details

Before: ● Changed the combination of letters and numbers in the new Adventurers' Family Names from 4 to 6 characters.

After :  ● Changed the combination of letters and numbers in the new Adventurers' Family Names from 4 to 6 5 characters.

● Added the Barrier of Infestation.

- Hadum, the God of Despair, has extended their reach to the Lord of Corruption in Serendia Shrine, where the lair of Kzarka lies. To resist against Hadum's infestation, Kzarka has gone berserk. This has caused Ahib Lejenti to now look for mighty Adventurers to bring a swift end to Hadum’s plan by destroying the Barrier of Infestation, which keeps the enraged evil deity bound, to soothe Kzarka's rage and return it to slumber.

- Having gone berserk to fight off Hadum's infestation, Kzarka now displays an incredibly powerful and frightening arsenal of spells, but at the cost of its health pool.

- You can start the Barrier of Infestation content through a weekly quest on the Elvia Realm servers. The barrier is divided into five levels. You can start with Level 1 to 3 in a group of 3 Adventurers, but once you make your way to Levels 4-5, you will need to face Kzarka alone.

- For each level, you will be given a 7-minute time limit. You must complete the attempt within 7 minutes to receive your reward.

- You can enter the Barrier of Infestation content after completing the questline "[Elvia] Obsidian Ashes" in Suggested quests then accepting the quest "[Elvia Co-op] Dreary Moonlight" from the Black Spirit.

- You can only accept each level's rewards once per family.

Over the course of our updates, we’ve introduced a variety of different ways to increase your (displayed) AP & DP. We wanted our Adventurers to be able to enjoy the game by setting new goals in character progression that goes beyond just focusing on upgrading gear. And so, the “Barrier of Infestation” is our latest addition in realizing this desire. Having its origins in feedback from Adventurers wanting to take on World Bosses 1-on-1, the Kzarka for the Barrier of Infestation is truly a fearsome foe. While Kzarka is designed to be taken down by one or three Adventurers, there is also a seven-minute time limit meant to serve as a challenge to make overcoming Kzarka more meaningful.

● Behr, the village of hunters, is filled with rumors of new and rare hunting monsters. These monsters include a hawk that gives off a unique light and a dangerous black leopard that prowls about hidden in the darkness of the night.

※ According to the hunter rumor mill in Behr, there have been new sightings in Balenos and Kamasylvia. They say you can find the hawk with its fading light as the highest point in Balenos, and that you'll need to pay close attention for movement it loses its light entirely. As for the black leopard that prowls while hidden by the dark nights of Kamasylvia, it is said to be drawn out by the moonlight, near where the cries of the old trees can be heard.

- Hunting these rare monsters will give you a chance to learn their Knowledge, and if you satisfy certain requirements, you will be granted the following Titles:

- The appearances of the pieces will also change in 5 phases similar to the previous pieces.

● Added the items "Cup of Lone Tide" and the "Cup of Tragic Nightfall." You can use these items to imbue certain belts to get the All Damage Reduction or All AP effects.

- You can use the Cup of Lone Tide to "reform" gear.

- Reformed belts will gain the All Damage Reduction +6 effect regardless of their enhancement level, along with "Tidal" added to the start of the belt's name.

- Tidal belts can be restored to their pre-reformed state with the "Mirror of Equilibrium." The mirror can be purchased from Hughol, the blacksmith of Duvencrune. It is used to extract the reform stone from accessories.

- The following belts can be reformed with the Cup of Lone Tide: 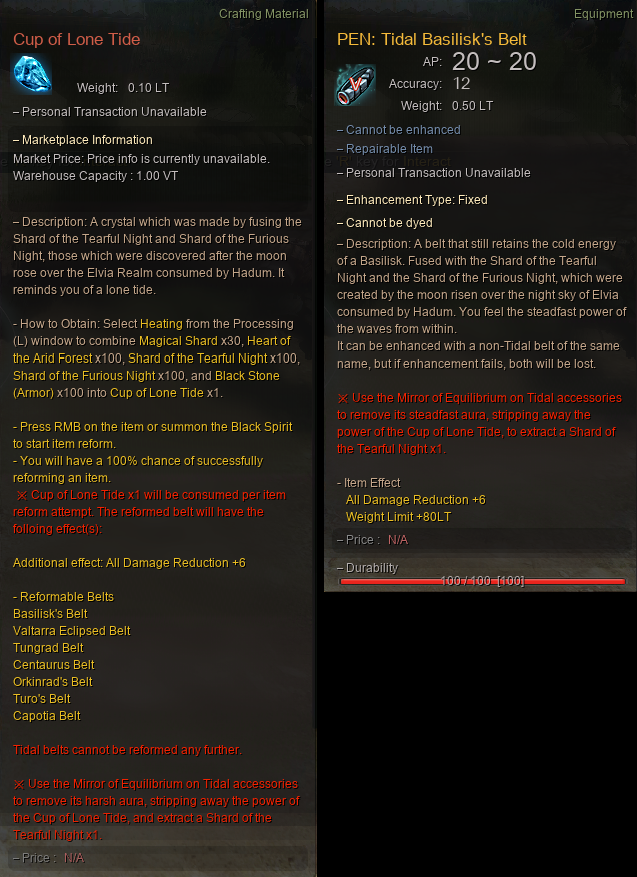 - You can use the Cup of Tragic Nightfall to "reform" gear.

- Reformed belts will gain the All AP +3 effect regardless of their enhancement level, along with "Nightfallen" added to the start of the belt's name.

- Nightfallen belts can be restored to their pre-reformed state with the "Mirror of Equilibrium." The mirror can be purchased from Hughol, the blacksmith of Duvencrune. It is used to extract the reform stone from accessories.

- The following belts can be reformed with the Cup of Tragic Nightfall: 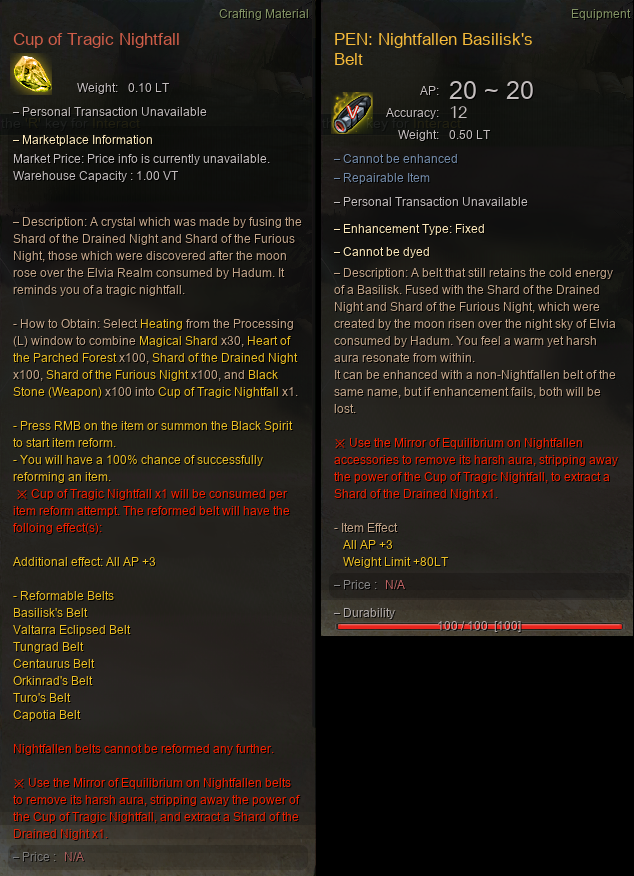 ● Fixed the issue where the text displayed when attempting to exchange a "Treasure Chest of a Sailor" was awkward.

● Changed in-game words or phrases that did not properly imply a "set probability" to be more clearly stated. 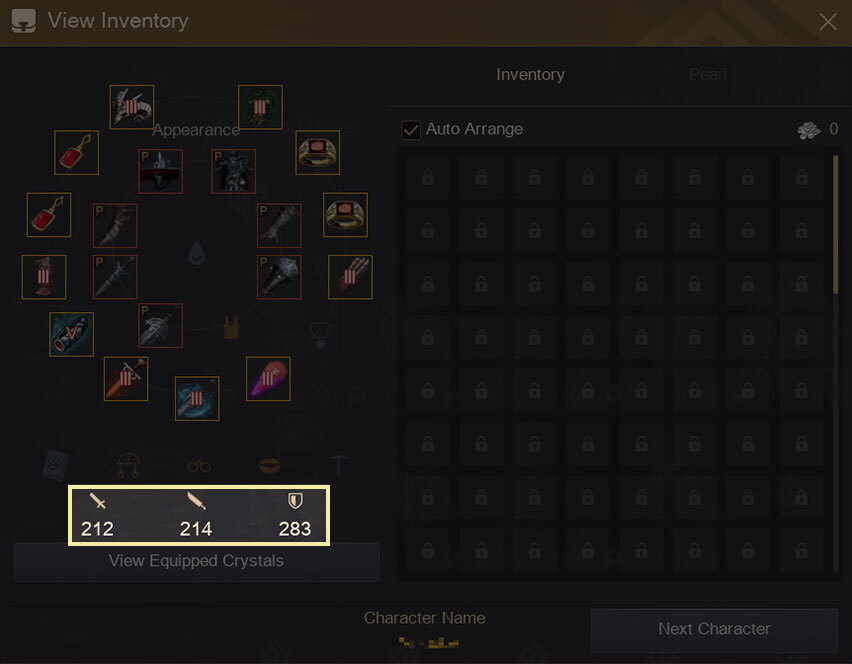 ● Fixed the issue where the production and crafting node icons of certain islands on the World Map (M) would overlap with the Barter item list.

● Changed the text that is displayed when trying to assign an additional Advisor in a Guild that already has an Advisor to be easier to understand.

● Fixed the issue where the item descriptions of the Secret Books given as rewards for completing the Awakening and Succession questlines would not be displayed properly.

● Fixed the size of the mount View Inventory window to match the actual number of slots it has when viewing it in the Stable.

● Added a sound effect to the message which announces the completion of the Rich Merchant's Ring.

● Fixed the issue where long text appeared awkwardly in the Maid/Butler List.

● Changed the game client to no longer keep unnecessary logs after a buff effect ends.

● Improved how settings are saved when uploading settings through the Settings Archive.

● Changed the combination of letters and numbers in the new Adventurers' Family Names from 4 to 6 5 characters.

● Fixed the issue where frame rates would improperly drop for certain PC configurations.

● Fixed the issue where the space to enter the coupon was displayed abnormally when viewing the page to redeem coupons on the official website through Internet Explorer.

● Fixed the issue where the backgrounds of the following regions appeared abnormal:

● Fixed the issue where guild members of only certain guild ranks could demolish annexes such as a Hwacha/Flame Tower in Savage Rift.

● Fixed the issue where the tooltip for skill descriptions would remain displayed on the screen in certain situations for Gamepad UI mode.

● Fixed the issue where the loading visual for entering an Elvia Realm server would be aligned to the bottom portion of the screen.

● Fixed the typo in Settings > Interface Settings > Gamepad where it used to show Invert Horizontally/Vertically.

● Fixed the issue where an abnormal message was displayed when remote collecting a guild mount in the World Map (M) while in Gamepad mode.

● Fixed the issue where the number of slots in the Mount Equipment/Inventory UI appeared abnormal when checking in/taking out a mount from the stable.

● Fixed the issue where the dye would not be applied to the item "[2nd Anniversary] Lollipop Sticker" when equipped on certain face types of Lahn.

● Fixed the issue where the Trace of Blood button appeared when talking to an Old Moon Manager NPC.

● Fixed the issue where you could steer the large ship of a party/platoon member that was in the same Guild Alliance.

● Fixed the item "[Warrior] Epheria Marine Classic Set" to give the items listed in its descriptions.

● Fixed the issue where the equipment slot icon would still show on the mount's View Inventory in the stable even if it has an item equipped.

● Fixed the issue where the mount's equipment would not display for guild when on the mount's View Inventory in the stable.

● Fixed the mount's View Inventory in the stable to show the mount's equipment durability properly.

● Fixed the Manage Sailors window in Gamepad mode to not display unnecessary tooltips.

● Fixed the issue where the number of inventory slots appeared abnormal in the mount's View Inventory for guild mounts that were just registered.