“It isn’t easy protecting your loved ones, you know.

I don’t want you suffering the same sadness I experienced.”

When I were but a wee lass, I was playin’ ‘bout me father’s treasures and just so happened to stumble upon a right fine weapon!

Twirlin’ it about, like a right fool, I tapped on the trigger and sent its harpoon sailin’.

‘Course at that moment me father just had to be comin’ to check on his treasure, didn’t he?

Aye, the memory still pains me to recall.

It was the harpoon piercing through me father’s side…

I ran and wrapped me arms around him, blood-soaked though he was, and bawled me eyes out.

But me father just gave me head a quiet pat, never once hurlin’ blame.

“To hold a weapon in your hand is to say you’re ready to harm another.

If you don’t wish to harm others, you mustn’t hold a weapon.

But know that you won’t be able to protect the ones you love.”

I be just a child then, and too young to understand those words.

Ye see, I was more on the side of bein’ protected rather than doin’ the protectin’ back then.

But still, it did shock me to know that I had caused me father harm with me very own hands.

Even at fifteen, after striking out on me own, I didn’t yet savvy me father’s words.

Loved ones? Ones I wanted to protect? I had nothing of the sort.

I just me own self to look out for. That’s all.

And me treasure, of course. And me ship.

And then, life threw 'em at me feet.

The ones who took me whole life, me whole code, and flipped 'em on its head.

Aye, enemies indeed they be...yet, something kept me lookin’ on.

Next our paths crossed, they were “working out disagreements” with another pirate crew.

I listened to ‘em angrily queekin’ from across the water, defending their mistreated matey.

I watched ‘em rush in with reckless abandon, outnumbered though they be.

It left me feelin’ quite strange.

And even after bein’ beaten black and blue, they retreated with a “Just you wait! Yer faces will be twice as beaten as ours next time!”

Deep in thought, I set anchor near their base and uncasked a pint of grog beneath the moonlight to aid me mind along.

Just why couldn’t I take me eyes off 'em?

I knew they were gonna lose, but maybe I couldn’t help but be taken in by how they kept fightin’ for their fellow crewmates.

Me mind wandered, wondering if such a crew would ever fight for me that way.

After passing the night that way, me mind was set.

At sun-up, I drew anchor and made me way toward their base.

‘Twould be a lie to say me heart weren’t thunderin’ against me chest.

‘Twas the first I could recall askin’ someone to be me crewmate.

I wet my lips and hollered out.

Me nerves got the best of me, and I accidentally beached the ship...

Somethin’ about me act must’ve impressed ‘em, as they excitedly climbed aboard and named me cap’n.

Haha, they were as endearin’ as imagined.

10 years apart now, and their love and loyalty be unwavering still.

I hadn’t ever had such devoted affection from me own kin.

Now I savvy me father’s words from back then, I think.

I’d take up any weapon to protect you all.

‘Course, you’ll be me maties through thick and thin forever, aye? 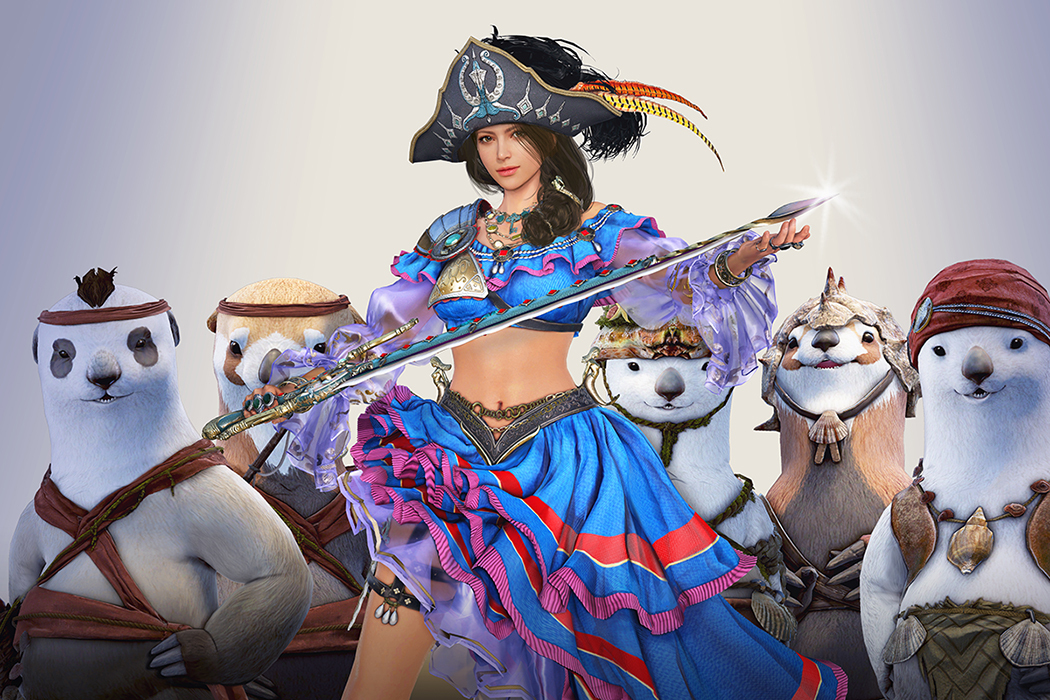 After securing the Slippery Scallywags Den and recovering the Heirloom of the Crow, Corsair leads the Slipper Scallywags in battle with her newly-obtained Patraca.

With Patraca—a weapon imbued with the dense mist of the Crow’s Nest—in her hands, Corsair can easily rush down enemies while surrounded by its mist. Distant enemies aren’t safe either, as she can pierce them with her harpoon from afar, dragging them into her mist and neutralizing them.

And of course, as the beloved captain of the Slippery Scallywags, she can give out orders for her crew to follow. Her loyal Scallywags are armed to the teeth with cannons, and ready to launch an artillery barrage the second Corsair gives the command. All this allowing Corsair to control the battlefield and surprise her enemies.

Any foe unfortunate enough to run into Corsair stands no chance of escaping her mists, especially with her loyal crew at her side.

Throws her rope into the air, lifting her up and surrounding her blade in mist, as she comes down and slices her foes.

Throws her rope towards the sun, floating mid-air, before firing her harpoon.

Enemies hit by the harpoon will be neutralized by her mists.

Reels back her launched harpoon, luring enemies into the mist.

Lifts her weapon into the air, giving the signal to open fire.

Following her orders, the Scallywags fire their ship’s massive anchor at the enemy.

Look forward to the swash-buckling antics of Corsair and the Slippery Scallywags on August 11, 2021!