Revisions to the August 18 Update Details

접기
● Added a function that allows you to control the UI by participating in the OX quiz event when using the Gamepad UI.
Last updated: 8/24 09:29 (GMT+8)

● Added the fourth volume of the Herald's Journal. It records Rubin's journey to be the greatest herald ever.
- Adventurers who have completed the three previous volumes of the Herald's Journal will be able to immediately continue with the fourth volume without requiring any other conditions.
- The fourth volume of the Herald's Journal offers a new type of quest objective that's different from previous timed quests. Regardless of the state of the Adventurer's gear or class, all will be dealing with these new types of timed quests on an equal footing.
The different objectives including ones where you will need to carry out a bunch of tasks in quick succession, such as moving boxes and carts, sweeping chimneys, while others involve shooting down scarecrows that pop up and disappear in an open field while on the clock, as well as transforming into a Stoneback Crab and dodging explosive obstacles to reach a goal.
The Herald's Journal was designed as an Adventurer's Log that would provide a different style of entertainment for the adventurer with the introduction of timed quests. The feeling of barely making the timer is a special offering of timed quests, but they can also be quite stressful for Adventurers trying to complete the objectives while on the clock. Therefore, we tried our best to deliver a more entertaining form of timed quests in the fourth volume of the Herald's Journal. We hope you enjoy continuing the tale of how Rubin ended up as the greatest herald ever with the newly added fourth volume.
● Increased the maximum BPM to 200 on the Compose/Score window of the Music Album.
● Changed the Campsite function window to remain open if attacked when the "Hide UI When Attacked" option has been deactivated in settings.
- Changed the system message window to turn on and off when attacked, depending on the Hide UI settings.
- Changed the Repair UI to not turn off when attacked.
- Fixed the issue where you could not type in numbers using the numberpad when attacked.
Having durability drop in monster zones can be frustrating. That's why the Campsite function was so convenient even if there was a repair NPC nearby. Previously, you had no choice but to quickly repair your gear while battling defeating monsters or using Invincibility skills because the Repair UI would close when you were attacked. Now, you no longer have to worry about this problem. We would like to apologize for getting to this issue so late and will continue addressing “commonplace inconveniences” and make improvements.

● Reduced the cooldown of the "Change Skill Preset" function in the Secret Book of Old Moon from 60 min to 10 min.

● Fixed the issue where combos from basic movements weren't smooth when attempted after stopping while sprinting in Awakening combat mode.

● Reduced the weight of the following potions/recovery items by 50%.
- Accordingly, the weight of items that have [Guild] or [Oasis] in front of their names was also reduced by 50%.
- However, the weight of potions that have content exclusive titles in front such as [Battlefield], [Savage] have the same weight as before of 0.01LT.

The update on the Black Desert Global Lab last week included the reduced weight of potions. The same update was applied today to the official servers, and although opinions were divided on this topic, we decided to reduce it by only 50% as it could greatly depreciate the value of the treasure.

However, as we mentioned in last week’s update for the Black Desert Global Lab, we are still deciding on which direction to go for the development of the lesser version of Ornette’s Spirit Essence and Odore’s Spirit Essence. Please keep in mind that there might be future adjustments depending on the results of this update, but if there is a lesser version of Ornette’s Spirit Essence, its own unique value will be secured. However, Odore’s Spirit Essence is not actually used in combat frequently, and you can still enjoy powerful effects with the lesser version. That’s why we are currently having thoughtful discussions as we make our improvements, and would be keen to hear the wonderful ideas that our Adventurers have as we are trying to tackle this problem from all directions.

Some elixirs such as the Perfume of Courage and Elixir of Deep Sea, have an appropriate cooldown of 20 min as their effects are powerful. However, this meant you had to wait for the long cooldown to end even after the death of your character. Our Adventurers have requested that we reduce the cooldown for this reason, so we have reduced this cooldown to 10 sec, along with regular elixirs. However, we will keep an eye on what effects this may have on class balance.

Not only were there requests to reduce the cooldown of elixirs, but there were also a lot of requests to reduce the cooldown for food items. Unfortunately, this is not as simple as elixirs, as eating food gives Health EXP. However, we are currently trying to find ways to make improvements and hope to show them first on the Black Desert Global Lab soon.

- You can obtain more Skill EXP than before when defeating monsters at the following monster zones in Kamasylvia:

One of the biggest concerns of our Adventurers when leveling a new character is Skill Points. Learning new skills requires a lot of skill points, and being forced to go to specific monster zones because of this was not a very enjoyable experience. With this in mind, we adjusted the amount of obtainable Skill EXP so that our Adventurers can earn skill points across the world of Black Desert. The above adjustments take into account the number of monsters at each zone so that you can earn the same amount of Skill EXP regardless of the monster zone.
● Fixed the issue where the 2 monsters Sandstorm Plunderer and Shadow of Gahaz appeared abnormally at Gahaz Bandit's Lair.

● Removed the cross pattern from the Keplan area in Calpheon.
● Changed the Slippery Scallywags Den to no longer be a town, but a regular area.

● Changed a part of the way that the Spirit of Battle Gauge would accumulate during Node/Conquest Wars.

We are constantly checking your feedback from the previous Conquest War pre-season weekend. First off, we have applied a change that was suggested for the Spirit of Battle. An effect was added so that your guild members can know that the skill was used (it is a short but very visible effect. Depending on feedback, we are considering increasing the duration of the visual effect). We also changed a rule for filling the gauge so that weaker guilds can take better advantage of it.

Additionally, we are currently coming up with something that can be used during mid to late war, like a "finishing move." The previously announced Culverin is currently being designed in this manner. We are also trying to add more ideas, so continue to send us suggestions.

● Fixed the issue where a limit on max HP would be applied in Conquest Wars of the Calpheon, Mediah, and Valencia territories.

● Improved the Central Market UI so that you can re-register items listed for sale or ordered. 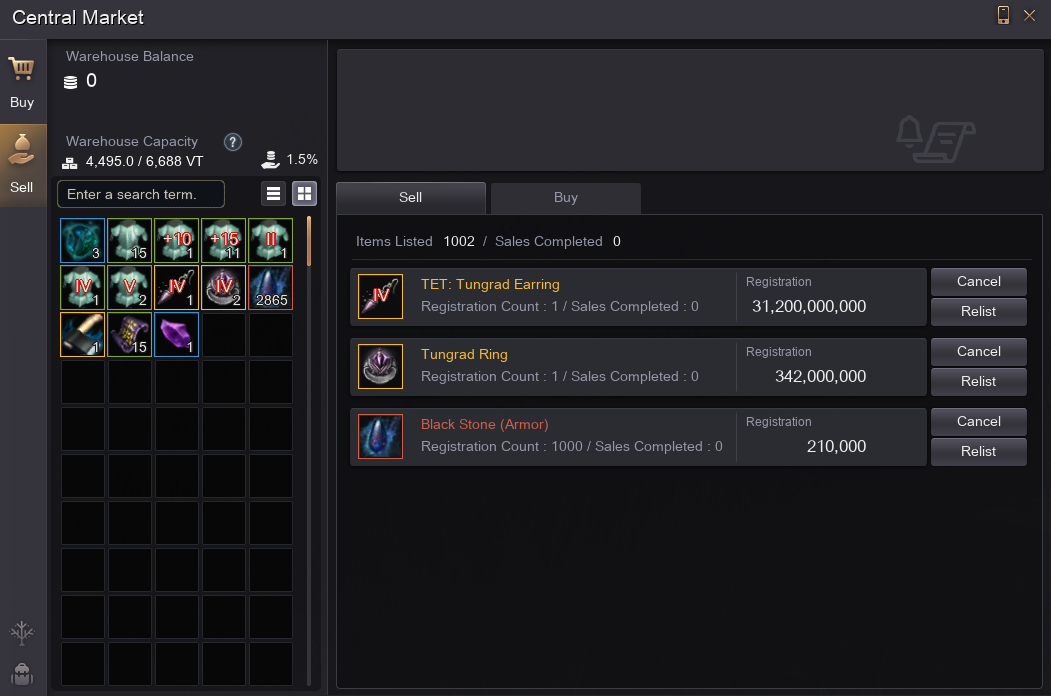 It was a hassle to sell/purchase items as it required you to collect the items being sold/ordered and post them again for items like eggs, milk (required for cooking), and Caphras Stones. Therefore, we added the “re-register” function as it became tedious to check the Central Market window every time an item would be purchased/sold. The same function will be added to the Central Market on the Black Desert+ app soon.
● Changed the "Skill Log" previously included in the "Skill Guide" to be able to be managed separately in the Edit UI window. 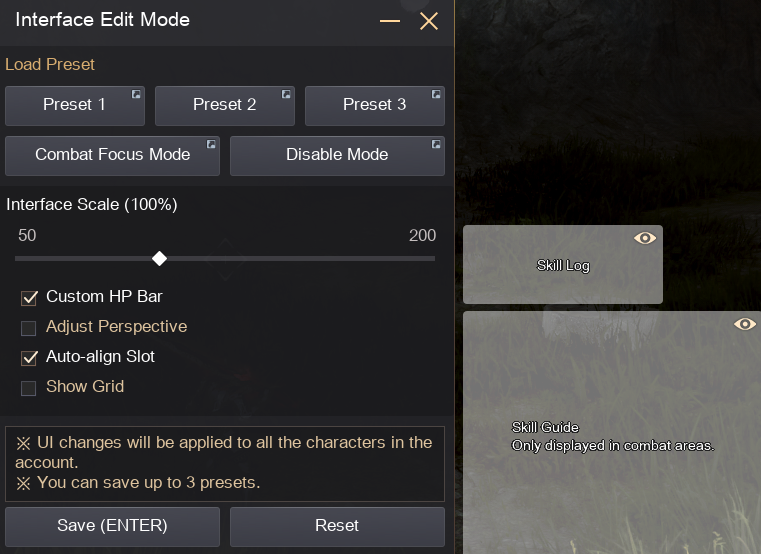 This update may not be much, but the content of this update provides a separate function for Adventurers who want to only see the Skill Guide or only see the Skill Log. We will continue to provide updates that are minor but meaningful like this.
● Added a setting through which you can turn on/off the Friend Login Alert that appears in the top center of the screen.
- This setting can be found above the Guild Members Login option in the ESC menu > Game Settings > Notifications. 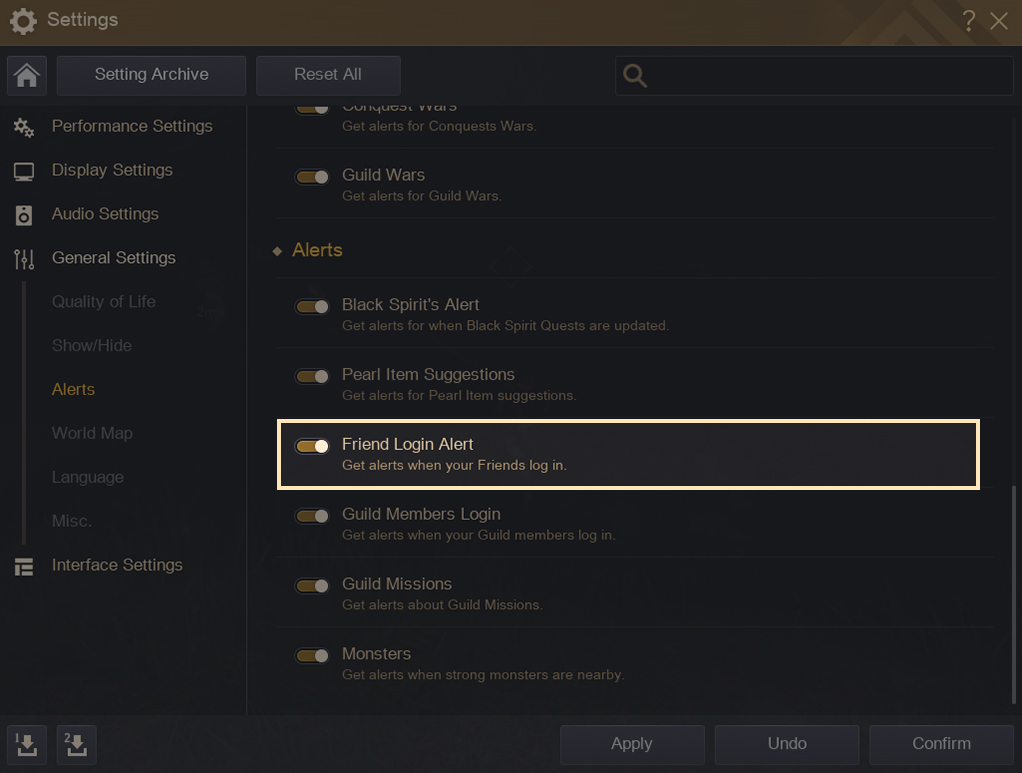 ● Added an effect to make it easier to find the new item you obtained from the Central Market Warehouse.
● Changed the Show Equipment/Inventory window to stay on the Pearl Inventory tab when checking another character while it is selected.
● Changed the Minimap to maintain its zoom state when resetting the UI with the Minimap in 3D mode.
● Changed the Letter (B) UI to show a message on the bottom right of the screen if you have a letter that will expire soon when it is closed.
● Added a message notifying you that your party/platoon invitation was rejected.
● Added a notification that appears when you attempt to apply for a party that does not exist by clicking the link for the party/platoon in recruitment chat.
● Increased the size of the scroll button on the Processing Knowledge List in the Processing (L) window.
● Increased the size of the scroll button in the Inventory (I) window.
● Changed the search function in Placement mode to only search for items within the selected area of the tab.
● Added a search reset button on the Inventory and Warehouse windows loaded through a maid/butler.
● Added a function that allows you to control the UI by participating in the OX quiz event when using the Gamepad UI.
Last updated: 8/24 09:29 (GMT+8)
● Fixed the issue where setting the UI Theme to Season: Summer would prevent the background image of the Time Remaining notification to be displayed.

● Reduced the waiting time for changing servers from 15 min to 10 min.
We reduced the time required to wait to change servers. The 15 min wait time was placed in the past because of Imperial Trade, trade market prices, Adventurers avoiding unwanted fights, and various other reasons. However, we received the feedback it was still way too long for our Adventurers. Therefore, the time was reduced. As we slowly update the content tied to moving servers, perhaps there might come a day when server change delays are not required.

● Changed the Pearl Shop (F3) to update the information when selecting another product in the selection window.
● Fixed the issue where the Pearl's Blessings counter appeared abnormal if you purchased an item on the Pearl Shop (F3) with a coupon that resulted in a discount of 1,000 Pearls or more.

● Added a Corsair awakening class introduction page.
● Fixed the issue where the tab on the upper part of the Beauty Album/Photo Gallery would appear abnormal.