Here are the updates made to Black Desert on September 29, 2021.

(Patch size: approx. 0.98 GB)
- Please note that the update for Steam may be larger than the size listed above.

Revisions to the September 29 Update Details

[ ITEM ]
접기
● Added a Guild Processing recipe for crafting the [Guild] Restored Cadry's Forbidden Book with Cadry's Tokens that had seen a change in their value due to the Valencia loot revamp.

[ QUEST & KNOWLEDGE ]
접기
Ever since the Old Moon Guild began offering an opportunity for a guaranteed PEN (V) accessory, many of our Adventurers have taken them up on that offer. While originally you could exchange your accessory at TET (IV) or PEN (V) enhancement levels once per family, we decided we wanted to lessen the burden of choice for our Adventurers by offering one additional chance to change the type of your accessory.
Last updated: 9/29 13:58 (GMT+8)

Event 2. Fishing for Silver and Gold

● Pulvio has taken on the role of exchanging "Swell Sea Shells" from the 2021 Summer Season and "Sunset Maple Leaves" of Season+ from Igor Bartali. 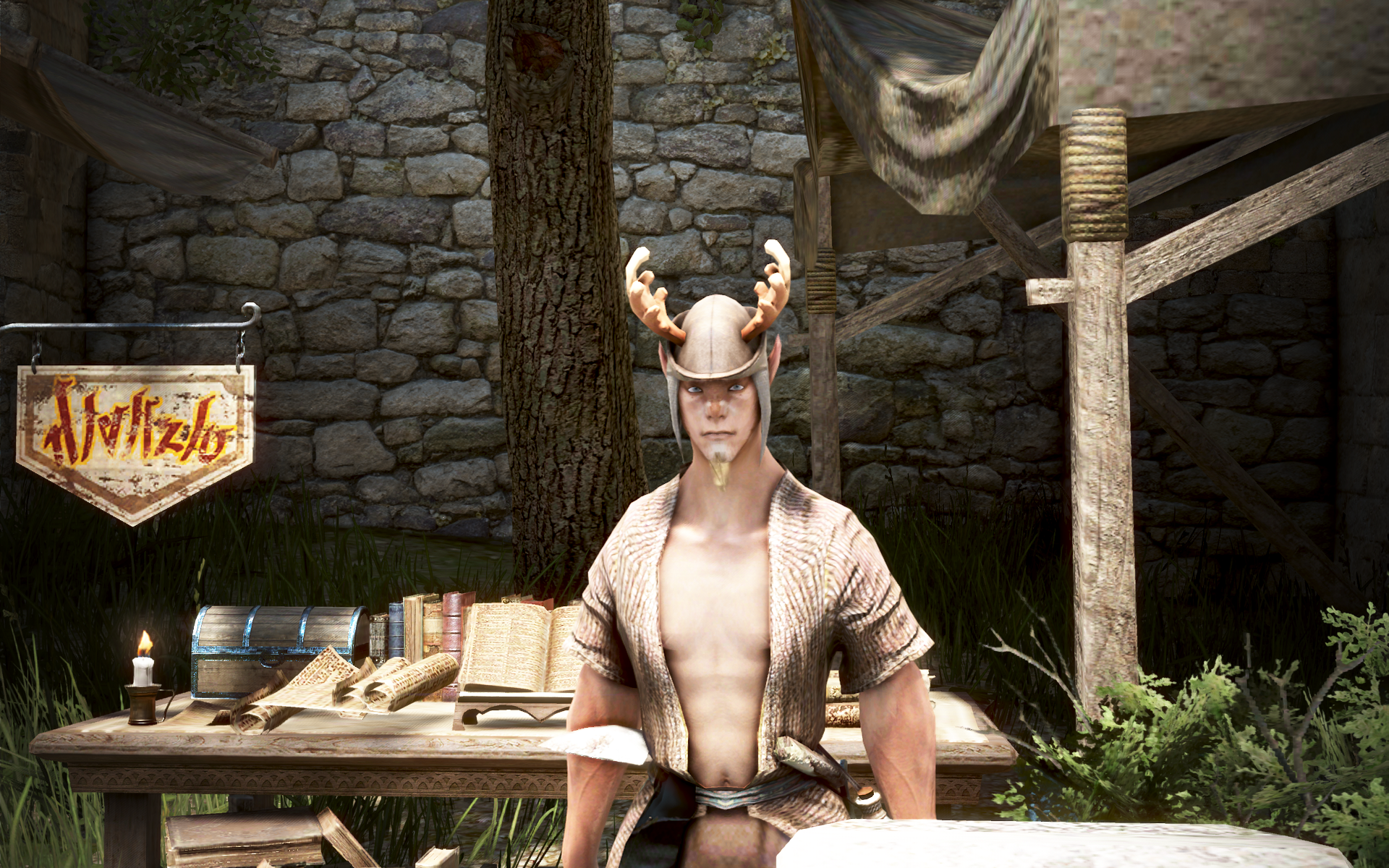 ▲ NPC Pulvio is located next to Zaaira in Velia.
● Changed the 7 types of boss gear exchange coupon quests to now be unified as one type regardless of the specific season said coupon was acquired from.
- As long as you have a Boss Gear Exchange Coupon in your inventory, you can accept and proceed with any of the exchange quests with Fughar. You may only accept and proceed with one quest at a time, but once completed, you may proceed immediately with another exchange quest.
※ While you cannot obtain a [Season] Boss Gear Exchange Coupon from Season+, if you have acquired any coupons from previous seasons, you may proceed with the following quests with said coupon in your inventory:

● Changed the summoned minions so they do not engage in any actions when the character that has summoned them is idle for a prolonged time.
We originally scheduled this update for September 29, but discovered additional issues during our final review process. Currently we're undergoing measures to identify the exact cause of these issues in order to implement the required fixes, and will keep you updated with more details in the near future. We apologize for any inconvenience caused by the continued absence of "Traitor's Gravestones" in-game, and will continue in our efforts to provide a stable and solid service.

● Prime: Blizzard: Storm - Changed so the summon that appears during the skill will vanish immediately if it attacks a Wooden Fence.

● Toxic Flood - Changed so the summon that appears during the skill will vanish immediately if it attacks a Wooden Fence.

● Lava Field - Changed so the summon that appears during the skill will vanish immediately if it attacks a Wooden Fence.

● Over There! - Changed so the summon that appears during the skill will vanish immediately if it attacks a Wooden Fence.

● Breath of Aal, Prime: Breath of Aal - Changed so the summon that appears during the skills will vanish immediately if it attacks a Wooden Fence.

● Changed the monster zones of the Elvia Realm as follows:
- You can obtain the following keys according to a set probability when defeating monsters in the Biraghi Den. 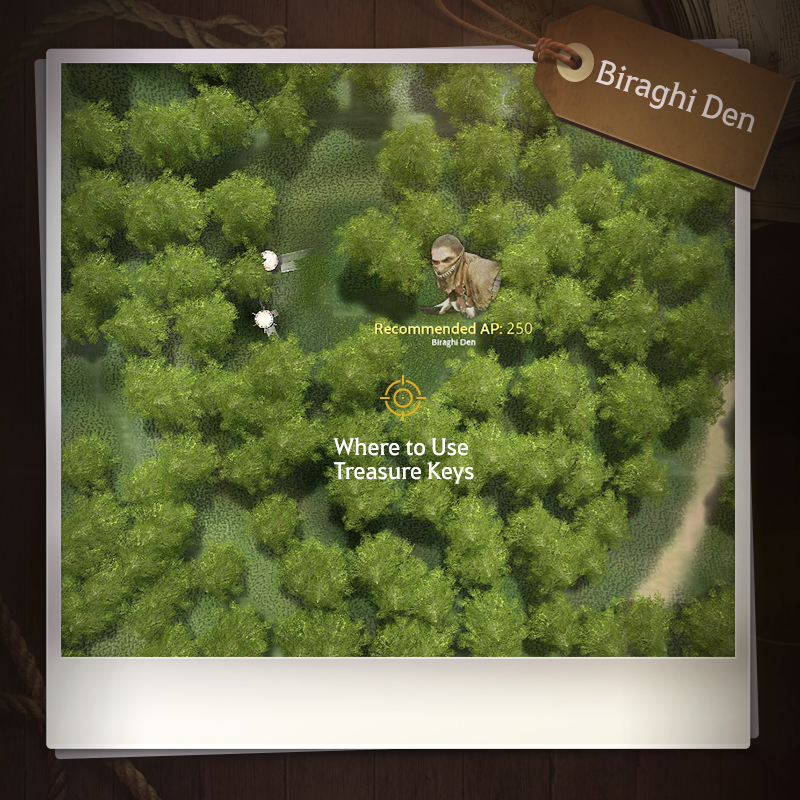 ▲ Where to use the treasure keys:
We sought to change up some of the regions of the Elvia Realm, excluding the more popular Orc Camp and Bloody Monastery zones. First, we lowered the recommended AP for Biraghi Den, Altar Imp Habitat, Castle Ruins, Swamp Naga, and Swamp Fogan to 240~260 so more Adventurers could take up the challenge, while adjusting the junk loot drops to match the reduced AP levels. Those Adventurers who are at higher AP levels than the new recommended amount will find that you'll be able to acquire much more loot than before. Regarding more detailed changes in Biraghi Den, we changed the bounty system to no longer be competitive but apply to each individual player. In order to encourage further use of this system, we reduced the respawn timer for basic Altar Imp monsters. For Bloody Monastery and Red Orc zones, we increased the density of monsters spawning in all areas except for the few "best spots." Also, while not included in this week's update, we are looking to improve the Castle Ruins mechanic to function not just within but outside of the castle walls.
● Fixed the issue where the following monsters that appeared after using the Crimson Bell item in the Bloody Monastery on the Elvia Realm servers would cause excessive camera shaking when they attacked:
- Cultist Shaman
- Cultist Giant Warrior

● Added a quest to exchange the accessory obtained from the "Old Moon Guild's Trade Offer" quest for a different accessory.
- Once you've completed the "[EXC] A New Choice I" quest, you can accept the following "[EXC] A New Choice II" quests from Jetina:
* You must have the relevant accessory enhanced to TET (IV) or PEN (V) grade in your inventory (unequipped) to proceed with and complete the quests.
* If you've used a reform stone on the relevant accessory, you will need to extract the stone before you can proceed with and complete either of the quests.
* You can complete either the TET (IV) or PEN (V) grade accessory quest once per family.
● Changed the name of the following quest due to the addition of the aforementioned exchange quests involving the accessories obtained from the "Old Moon Guild's Trade Offer" content.
● Changed portions of the quest dialogue for "[EXC] A New Choice I" due to the addition of the "[EXC] A New Choice II" quests.
● Improved the quest "[Valencia] Clean Revenge" to no longer require ancient coins that have been removed as quest rewards.
Ever since the Old Moon Guild began offering an opportunity for a guaranteed PEN (V) accessory, many of our Adventurers have taken them up on that offer. While originally you could exchange your accessory at TET (IV) or PEN (V) enhancement levels once per family, we decided we wanted to lessen the burden of choice for our Adventurers by offering one additional chance to change the type of your accessory.
Last updated: 9/29 13:58 (GMT+8)
● Improved the quest "[Gathering Lv. 36] Defense Base Support II" to flow more naturally due to Troll Blood now only being gatherable via using Fluid Collectors on Trolls.
● Changed the Igor Bartali's Adventure Log - Vol. 10 entry's goal from "Sell a Broken Golem's Core" to "Hand over Golem Fragment x10 to Anna Marre of Shuri Farm."
● Improved the Sealed Black Scroll knowledge to be learnable by speaking to the vagabond in Elric Shrine.
● Changed the "A Much-Needed Drop" quest dialogue to read more naturally.
● Fixed the issue where you couldn't proceed with "Fourth Test: Teaching the Fogans a Lesson" right after completing "Third Test: Naga, I Want You!"

● Added notifications for different circumstances under which you use the Follow function so that it'll be easier for you to see what state you're in.
- This function can be used by approaching adventurers and pressing the CTRL key to interact or the Follow button on the party UI.
- Improved to Follow an Adventurer by switching to a non-combat stance when attempting to Follow in a combat stance.
※ The Follow function will still automatically be canceled when the character you Follow changes into a combat stance.
● Added a function that allows you to uncheck the View Mount Inventory box under the following circumstances so that your mount inventory does not open automatically.
- When opening Storage via Interact with the Storage Keeper NPC of a town.
- When opening Storage via the Transaction Maid function.
※ Your mount inventory will no longer open when using Storage when you uncheck the View Mount Inventory box via the function shown below even when your mount is nearby.
※ You can only use the following function when your mount is nearby when opening Storage. The View Mount Inventory button also only appears when your mount is nearby. 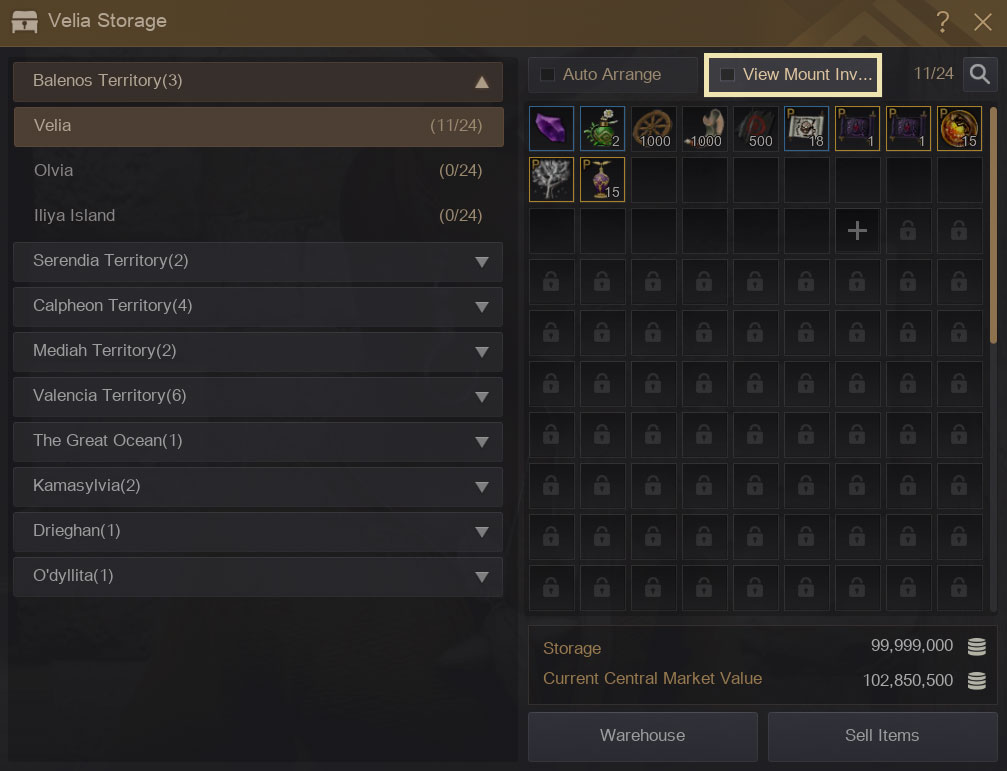 Previously, when interacting with the Storage Keeper of a town, you always had to turn off your mount inventory by pressing ESC to move your items to your Storage when your mount was nearby. Now, even when your mount is nearby, you can choose whether to open your mount inventory or not by checking or unchecking the View Mount Inventory box. When you sometimes want to see your mount inventory, we hope for you to conveniently use this function to open your mount inventory instantly by checking the View Mount Inventory box.
● Changed the quest icon on the Quests (O) window.
● Changed the alert on the bottom right to not appear on top of the Quest widget when the Quest widget and the alert on the bottom right of the screen overlap.
● Changed to display up to three 1:1 Chat notifications on the Friend List(N).
● Changed to maintain 1:1 Chat notifications on the Friend List(N) even after changing characters or reconnecting.
● Improved so you can install an annex by using a Node/Conquest War Annex Assembly Tool when using the Gamepad UI.
● Added an Auto Arrange function you can use when selling items via a Storage NPC when using the Gamepad UI.
● Added a function that allows you to filter the number of items for Barter and level of Barter when using the Gamepad UI.
● Added a search function for Orders and Items Listed on the Central Market. 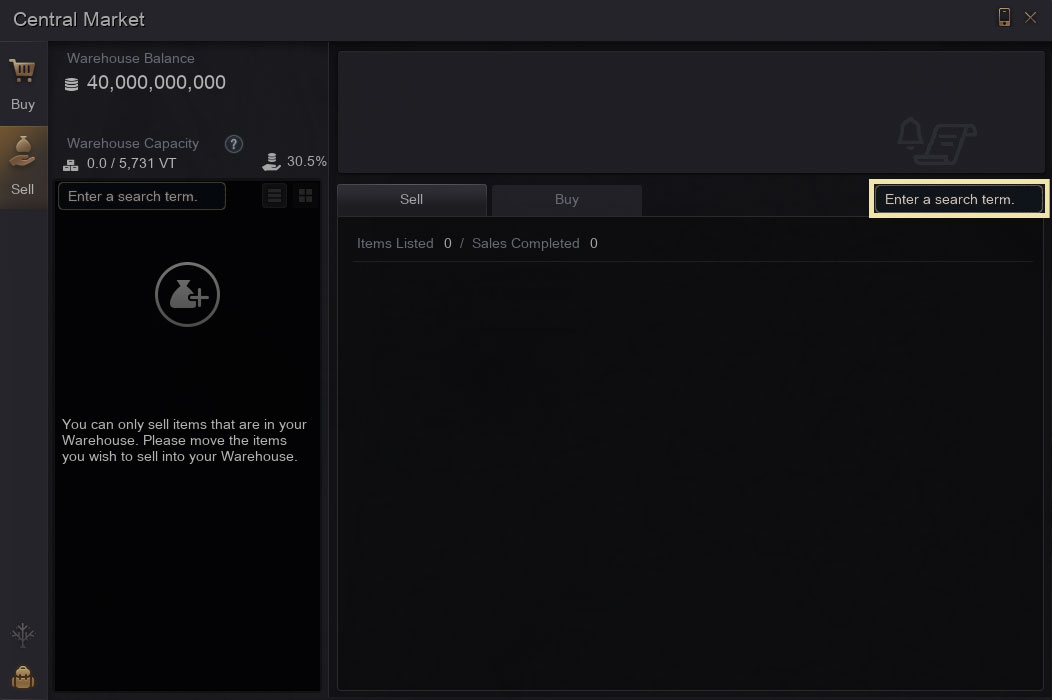 ● Changed to display only the contents of the first selectable box when selecting an item that includes 2 or more selectable boxes from the Pearl Shop(F3).

- Added an icon to be displayed for appearances that cannot be changed on the Beauty Album list.

● Improved the design and UI of the community on the official website.

● Added a filter that you can use to see posts on the official website depending on when they were posted.

● Improved the notification that appears when trying to open a URL for deleted or private posts on the community of the official website.