(Patch size: approx. 1.45 GB )
- Please note that the update for Steam may be larger than the size listed above.

Event 1. A Gift of Fresh Tulips

Event 2. Stir Up for Mythical Diné

The inventory was created so that you can store up to 30 artifacts, and for lightstones, each one stored will be stacked and displayed similarly to the "Palette" feature.

Additionally, the artifact inventory is shared amongst your Family. All of your characters can manage the items stored in the inventory, but when you infuse or unequip any stored artifacts or lightstones, please take note that you must move them from your artifact inventory to your regular inventory.

● Added an artifact inventory which allows you to store artifacts and lightstones separately from your regular inventory.
- The artifact inventory applies to your entire Family.
- You can use it via the "Artifact Inventory" button on the bottom of the Inventory UI.
- The same items will be stacked and take up a single slot, which will enable you to easily check the quantities of a single type of item.
- Small icons for lightstones will be displayed so you can get an idea of the current infused artifacts in the inventory without having to check the tooltips.
- You can use the filter on the bottom to look for fire, earth, wind, and special lightstones held in the inventory.

● Fughar, the Crow Merchants Guild Chief Manager, is lending a hand in converting your season character who has completed the Season: Drakania into a normal character.
- Details for the Season: Drakania graduation are as follows:
- Go to Fughar with a season character to complete the [Season] For the Future quest.
- Upon using the Honorable Adventurer's Certificate, your season character will be converted to a normal character.
- Complete the quests listed above to obtain Tuvala Conversion Stone Box, Gift Box Full of Memories, and Fughar's Letter of Encouragement.
- The contents of the Gift Box Full of Memories are as follows: 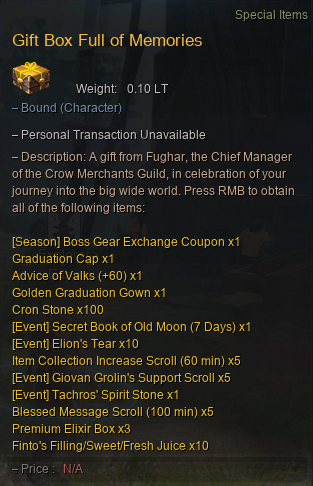 ※ Notes on Graduation
- You can use the Boss Gear Exchange Coupon obtained from the previous season.
- You can exchange your PEN (V) Tuvala gear for a TET (IV) Boss gear unavailable for transaction via the [PEN (V) Boss Gear]: The Best Deal quest.
- Use items and accept all rewards obtained by completing the 'Season, Black Spirit Pass Challenges' if you have purchased the [Event] Black Spirit Pass since you cannot use the items after graduating.
- You cannot graduate while you have Fughar's Timepiece.
- You can use the 'Honorable Adventurer's Certificate' item obtained from a graduation quest on a normal server.
Tip! Fughar's Timepiece is a very special item you can obtain during the Season: Drakania.
You can use the item before graduating if necessary, instead of deleting it to graduate.
▶ Go to [What Is Fughar's Timepiece?]
※ Go to [Adventurer's Guide] -> [Season Graduation] if you want to check out more details on the Season: Drakania graduation!
● Added a "Season Special Gift" quest that you can accept and complete via the 2022 Season: Drakania graduation.
- You can exchange the Season Special Gift Exchange Coupon obtained from the aforementioned quest for one of the following six special rewards from Fughar.
* However, if you've already received the special season reward, you cannot receive the reward for that particular season again.
- You can exchange the Season Special Gift Exchange Coupon for special rewards after graduating from Season: Drakania.
- Adventurers who have not received any of the season special rewards can obtain the rewards from the previous season through the next season. 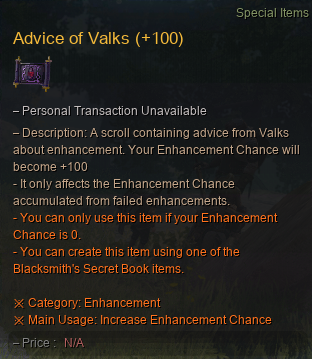 ● Tearing Arrow, Prime: Tearing Arrow - Fixed the issue where Air Attack would be applied instead of Down Attack while mounted.
● Evasive Explosion Shot - Changed to not be affected by the Jump Height increase effect when performing extra attacks.

● Chase - Fixed the issue where you could switch to your crescent blade when falling during the skill with your Tiger Blade drawn.

● Whirlwind Cut - Fixed the issue where damage wouldn't be applied when used laterally with your Tiger Blade drawn.

● Ravenous Talon - Fixed the issue where skill commands were awkward.

● Black Spirit: Crown Kick - Fixed the issue where its skill demo was for the skill Silent Breach.

● Markthanan's Heart - Fixed the issue where Prime: Ascent was included in the list of skills that recover HP in the skill description.

접기
● Added a manufacturing recipe for Wings of Ascension required to complete the "[Weekly] I, Too, Wish for Wings" quest from which you can obtain Mythical Feather.
- Due to the aforementioned change, the item descriptions and crafting methods on the quest summaries for Powder of Ascension and Wings of Ascension were changed.
● Changed the NPC for the quest, [Adventure Log] Wager for the Magic Tome, required to proceed with Caphras' adventure log, from Zahad, the Smuggler of Valencia, to the Bookseller, Kiyak.
- Due to this change, the relevant quests, dialogs, and item descriptions were changed.
● Changed the rewards for the Season Pass objective, "Leveling Up, One Step at a Time! 10."
- Before: Cron Stone x50
- After: [Event] Fughar's Enhancement Aid Box x1
※ Open the [Event] Fughar's Enhancement Aid Box to obtain all of the following items: 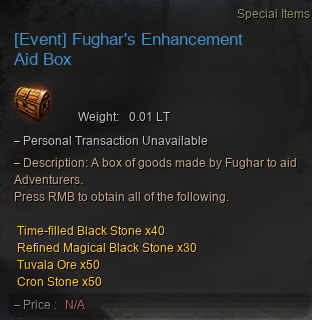 ※ Open the [Event] Humble Season Enhancement Aid Box to obtain all of the following items: 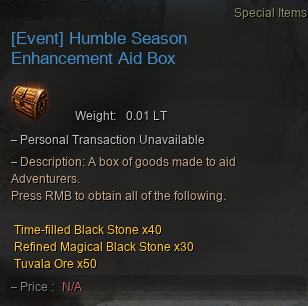 ● Changed your pets to repeatedly attempt to obtain the loot they failed to obtain.

● Fixed the issue where the titles on the boxes for major news displayed on the top part of the Black Desert official website would appear abnormal under certain circumstances.