(Patch size: approx. 1.28 GB )
- Please note that the update for Steam may be larger than the size listed above.

The dream horse, Mythical Diné, comes galloping across the waters! You can obtain a Mythical Diné via Mythical Awakening, and this legendary steed comes with its own unique skills such as Quicksilver, Triple Jump, and Protection of Okiara.
When we last revealed this mythical steed, many of our Adventurers displayed concern that it seemed to lack its signature horn. We are happy to report that Mythical Diné will be released with horn and all intact.
※ Mythical Diné can utilize skills such as Drift, Instant Accel, and S: Instant Accel while maintaining high speeds to gallop across water for up to 15 seconds, which is around the time it would take to travel between two closely placed islands.
You require the Breath of Okiara to mount up on and move with a Mythical Diné standing on water, so use this resource wisely. 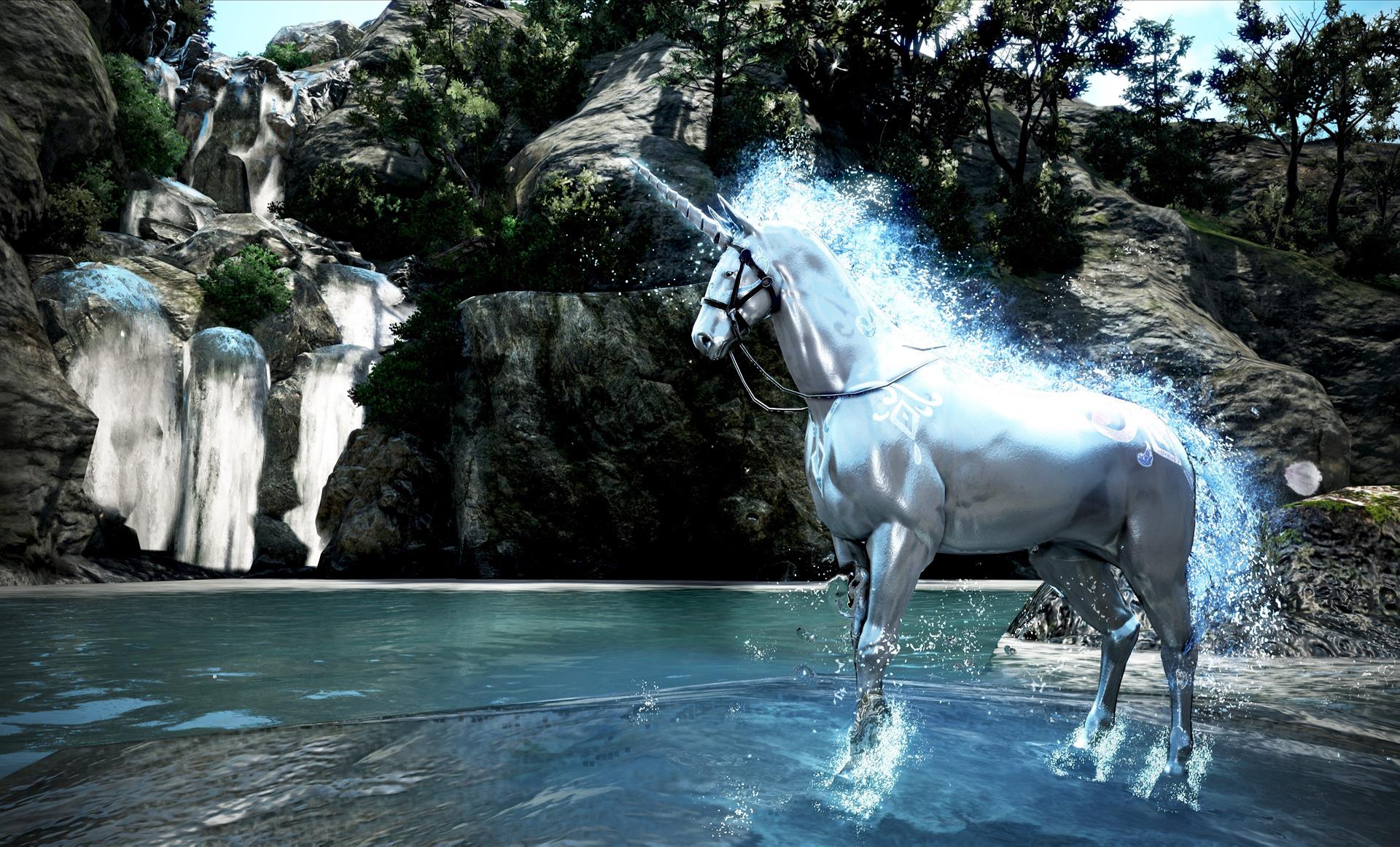 - The Breath of Okiara will be recovered naturally under the following circumstances:
* Idle, moving, and using skills while mounted on land
* While idle on land
- When it's filled up to a certain level, you can consume Breath of Okiara with the Quicksilver skill to gallop across water.
- Using Quicksilver at shallow waters or swamps such as Catfishman Camp, Swamp Naga and Swamp Fogan Habitats, and Tshira Ruins, will not consume the Breath of Okiara.
- Consuming all Breath of Okiara will dismount you from your Mythical Diné. (Mythical Diné assumes an aquatic form to commune with the waters.)
● Mythical Diné will take on an aquatic form when dismounted while standing in the swamps or atop water.
- You can dismount from Mythical Diné while standing on water. You can also mount Mythical Diné while swimming (as long as there's Breath of Okiara to spare.)
※ You can mount Mythical Diné with a matchlock equipped, but cannot gallop across water while it's still equipped.
● The crafting recipe and ingredients for the Mythical Censer, along with details on how to obtain them, are as follows:
- The higher the tier of the horse supplied to the imperial house, the greater amount of "Flower of Oblivion" you will obtain. 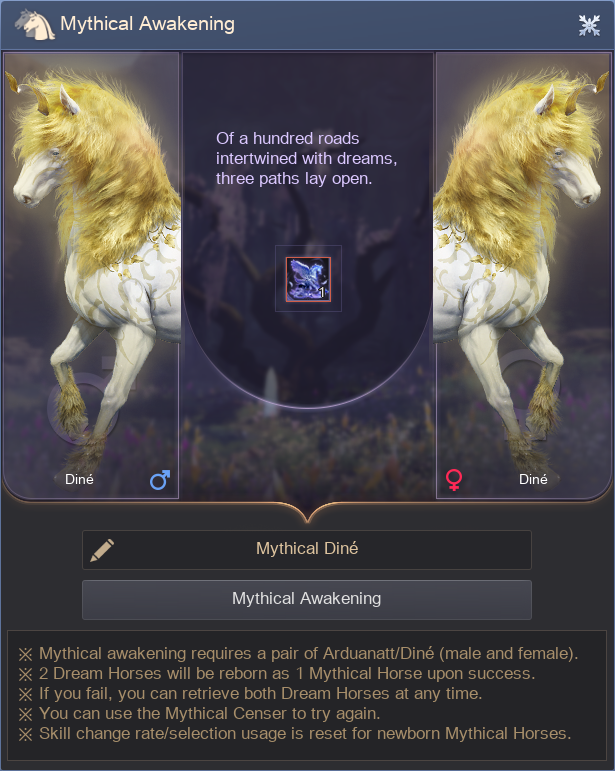 ● Horror Slam, Resonance - Improved her Lv. 56 Rabam skills to no longer allow Rage Transfer during the skills.
● Echo Pierce - Improved to now combo into Celestial Slam.
● Fixed the following skill effects to match the descriptions.
- Surging Tide (I to VI), Celestial Bo Staff Training
● Trample (I to Absolute) - Fixed the issue where the Bound effect for PvE was being applied even when on cooldown.

● Earth Splitter - Added to the Skill Guide UI.
● Fixed the issue where the Skill Guide UI would display even in Awakening state.
● Changed normal attacks while mounted to apply the correct amount of damage and the Bound effect where applicable.
● Absolute: Heavy Fist - Fixed the description to display the actual PvP damage reduction amount.
● Binding, Absolute: Fetter Knee Constraint - Fixed the issue where using the skill in Awakening would apply the debuffs twice and cause the target to become immune to the debuffs.

● Fixed the issue where characters who had moved to a big ship's wheel could get struck by monsters while sailing.

● Changed Venomous Night Fangs to now be stackable in one inventory slot.
- The recipe for "Ibedor's Scroll" was changed to "Simple Alchemy (L) with Venomous Night Fang x5," accordingly.
※ All relevant items in your inventory or storage has been moved to the storage in O'draxxia. 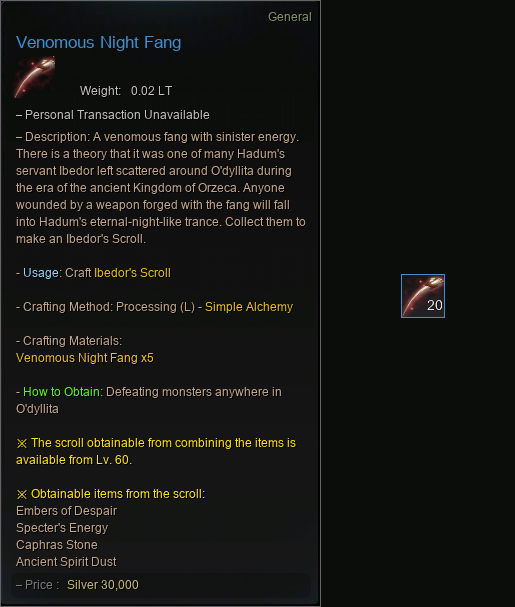 ● Improved monster and boss zones to be more easily identifiable on the World Map (M).

We're adding a processing recipe and quests to learn how to revert Combatant's Stone back into Narchillan gear.

● Added the means to revert Combatant's Stone once converted from Narchillan gear back into gear.
1. Use Heating (L) on Combatant's Stone (Weapon/Armor) to obtain "Spirit's First Breath" and "Combatant's Stone Fragment (Weapon/Armor)."
2. Use Heating (L) on each piece of Narchillan gear to obtain "Spirit's First Breath" as well.
3. Bring 7 "Spirit's First Breath" to Fughar and accept the "[Special Aid] By the Power of Narchillan Once More" quest.
4. Complete this quest to obtain all 7 Narchillan gear types.
※ The Combatant's Stone Fragments can be combined with "Spirit's First Breath" to reobtain the Combatant's Stone.
※ "Spirit's First Breath" in your inventory and storage will automatically be moved to your storage in Heidel.
● Added the means to obtain Canon awakening weapons.
- Added the means to obtain a Canon awakening weapon if you don't have one while proceeding with the "[Special Aid] Narchillan's Powerful Awakening Weapon" quest.
- You can accept the "[Weekly] Canon Awakening Weapon" quest from Tulem in Altinova.
※ This quest requires you to have completed your class Awakening questline and be proceeding with the "[Special Aid] Narchillan's Powerful Awakening Weapon" quest on a non-season character.
- The above details will be mentioned by Fughar during said quest.
● Added Corsair's Canon awakening weapon to be obtainable from the Canon Awakening Weapon Box.
● Changed [Berserker] Mountain Guardian Spirit Outfit Set, Helmet, and Armor to be exchangeable for the following outfit pieces through Tranan Underfoe in Velia after the May 18, 2022 (Wed) maintenance.
- You must have unequipped your [Berserker] Mountain Guardian Spirit Outfit Set/Helmet/Armor into your inventory to make the exchange.
- For more details on the exchange, please refer to the following.
Go to "[Berserker] Winter Mountain Guardian Spirit Outfit Exchange" 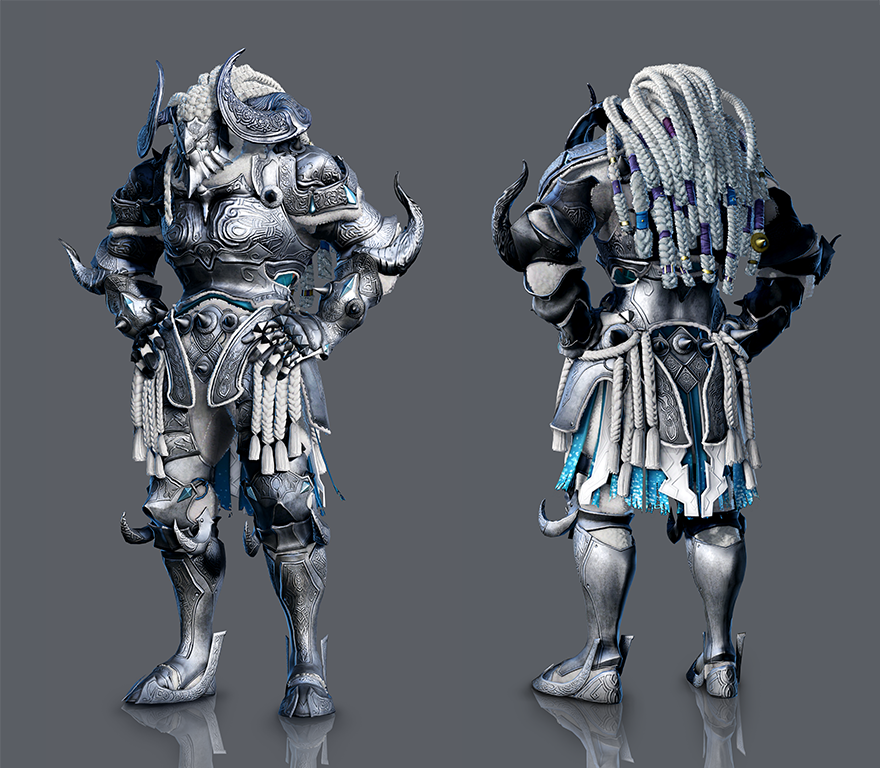 ● The Character Weight & Inventory Exchange Coupon can be used as follows.
- Using the item will open a UI where you can select the two characters you wish to exchange weight and inventory slots.
- Trial characters or characters with weight increasing items in their inventory cannot use this coupon.
- This item will be available until Aug 31, 2022 (Wed) maintenance, when it will be removed from the game. 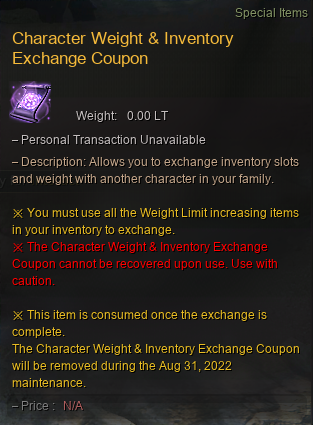 ● Increased the range of the obtainable buffs left by defeating [Anger], [Denial], [Resolve], and [Despair] Ancient statues.
● Reduced the frequency of special attacks dealt by [Anger], [Denial], [Resolve], and [Despair] Ancient statues over prolonged bouts.
● Fixed the abnormal patrol movements of Gyfin Rhasia Temple Underground monsters.
● Changed the [Despair] Gyfin Rhasia Decimator to no longer chase Adventurers up to the Gyfin Rhasia Temple node manager.
● Applied the following changes to improve combat conditions in the Gyfin Rhasia Temple Underground.
- Decimators will spawn closer to but will chase after Adventurers for shorter distances.
- [Fragment of Despair] Decimators' spawning has been changed to occur at more frequent intervals. This does not affect the overall number of Decimators that spawn during a given period.
● Fixed the issue where certain Ancient statues wouldn't respawn after [Anger], [Denial], [Resolve], and [Despair] statues were defeated.

● Removed certain unobtainable Knowledge entries such as Luxuries of Everfrost and Materials of Everfrost from the Knowledge window.
● Fixed the issue where you couldn't obtain the Knowledge entries for Magic-seeking Firefly, Perfection-seeking Firefly, Destruction-seeking Firefly, and Deep Sea-seeking Firefly.
● Changed the [Season Server Graduation] At the Crossroad quest required for season graduation to no longer be acceptable if you have the following items in your possession.
- [Season] New Adventure Box and [Season] Leveling Aid Box for each level
- You can proceed with the season graduation questline after obtaining the rewards by using all the pertaining items.
- Therefore, relevant text was added to the descriptions of the aforementioned items.
● Changed the description displayed when you hover your mouse over "[Everfrost] Search for the Holy Flame" on the Main tab of the Quests (O) window to read more clearly.
● Extended the period for the quest through which you can exchange the [Event] Brave Warrior's Token for Enhancement Help Kit II until June 8, 2022. 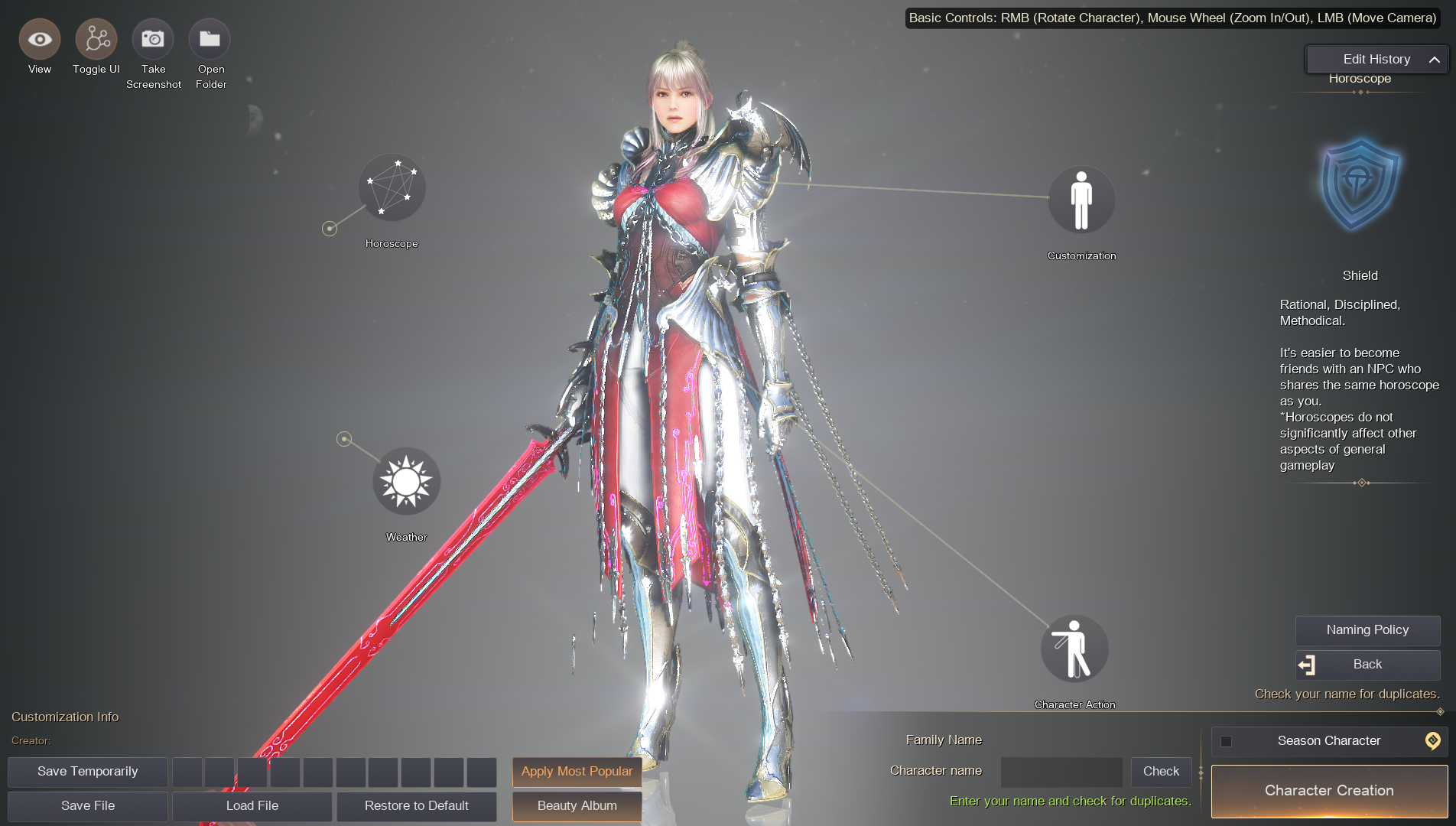