(Patch size: approx. 1.15 GB )
- Please note that the update for Steam may be larger than the size listed above.

Event 1. Heat Up with Hot Time

Event 8. Adventure With the GMs!

The revamps to Great Ocean monster zones and ship upgrade methods introduced in the GM note are now here.

First, we're improving the loot and drop rates in Great Ocean monster zones. We wanted to add more zones with unique traits for our Adventurers to choose from just as we did to the monster zones on land.
We also adjusted the difficulty of Saltwater Crocodile monster zones to be available for solo Adventurers, but will maintain loot dropping for up to two party members as before.

To make Great Ocean content more accessible to a greater number of Adventurers, we applied a revamp to the means of upgrading ships as well.
Certain zones will now drop Verdant Black Stones, certain region quests will reward a bunch of Sea Monster's Ooze, and new recipes for Adhesive for Upgrade have been added as well.
We will continue to look for making quality of life improvements so many more Adventurers will easily be able to access more Great Ocean content.

We'd like to thank all of our Adventurers who love sailing the high seas of Black Desert.

● Increased the drop rates and amount of loot obtained from defeating the following Great Ocean monsters.

● Changed the following monster zones to now bear unique traits with the adjustments made to loot reward types and drop chance.

● Adjusted the Agris Fever Points consumed when defeating the following Great Ocean monsters with the adjustments to junk loot.

● Adjusted the difficulty for the Saltwater Crocodile Habitat from Party of 2 to now be soloable.
- The health of Saltwater Crocodiles has been reduced by 40% accordingly.
- The loot drops remain same as before if attempted with a party of 2.
● Increased the Combat and Sailing EXP gains for your character and EXP gains for your Sailors when defeating [Outlaw of the Vadabin Sea], [Main Fleet], and normal Goldmont Small, Medium, and Large Battleships.
● Added an item that drops from defeating Sea Monsters
- Ferocious Sea Monster's Spirit Pouch: Vendor loot affected by Agris Fever and Item Collection Increase Gauge. 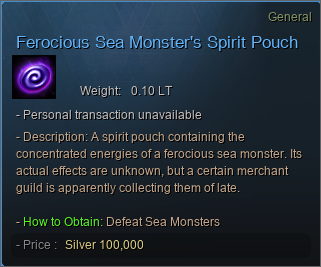 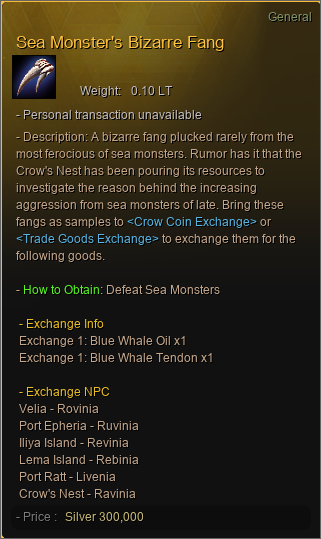 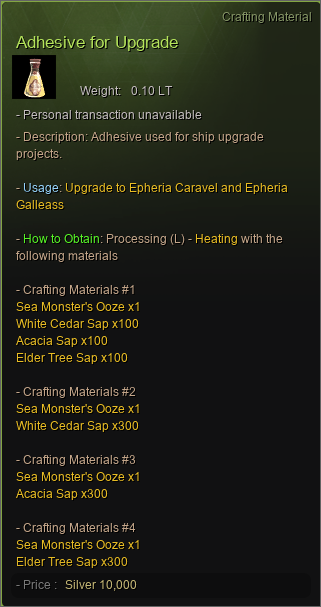 ● Adjusted the materials required for upgrading Epheria Caravel and Galleass.
- You will now need 4 Seaweed Stalk to upgrade a Caravel (previously 6).
- You will now need 3 Tide-Dyed Standardized Timber Square to upgrade a Galleass (previously 6).
● Improved the following item descriptions for materials used to upgrade ships.
- The different uses and means to obtain the following items have been added to the descriptions. 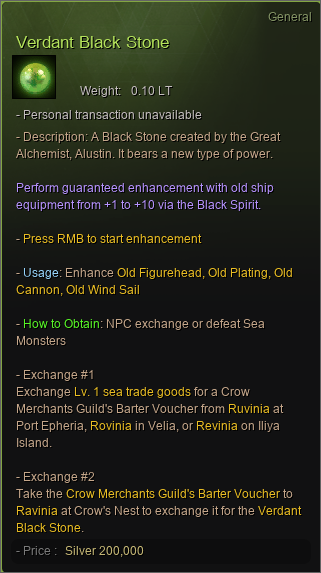 ● Changed the location for the region quests Hungry Sea Creatures' Crystal I to III from the Arsha Sea to the Ahrmo Sea.

● Fixed the issue where the AP of your minions summoned within Marni's Realm was abnormal.

● Dusk Slash - Fixed the issue where comboing into the skill's attack 2 after the following wouldn't apply the All DP +10 for 15 sec effect:
- Seismic Strike, Frenzied Spear, Shield Assault, Shield Tide

● Prime: Dream of Doom IV - Fixed the issue where the wrong number of targets were hit when using the skill through Succession: Imminent Doom.

● Prime: Crust Crusher - Fixed the issue where using the skill while in the Prime: Serene Mind state wouldn't play any sound effects.

● Blitz Stab - Fixed the issue where the Ultimate version of the skill wouldn't activate on hits.

● Prime: Tendon Cutter - Fixed the issue where using the skill at a certain distance from the target wouldn't activate the last extra attack.

● Black Spirit: Sura ChaoSpree - Fixed the issue where the Down and Back Attacks wouldn't activate.

● Succession: Phantasmal Snare - Changed to no longer let your character move with the mouse during the skill. 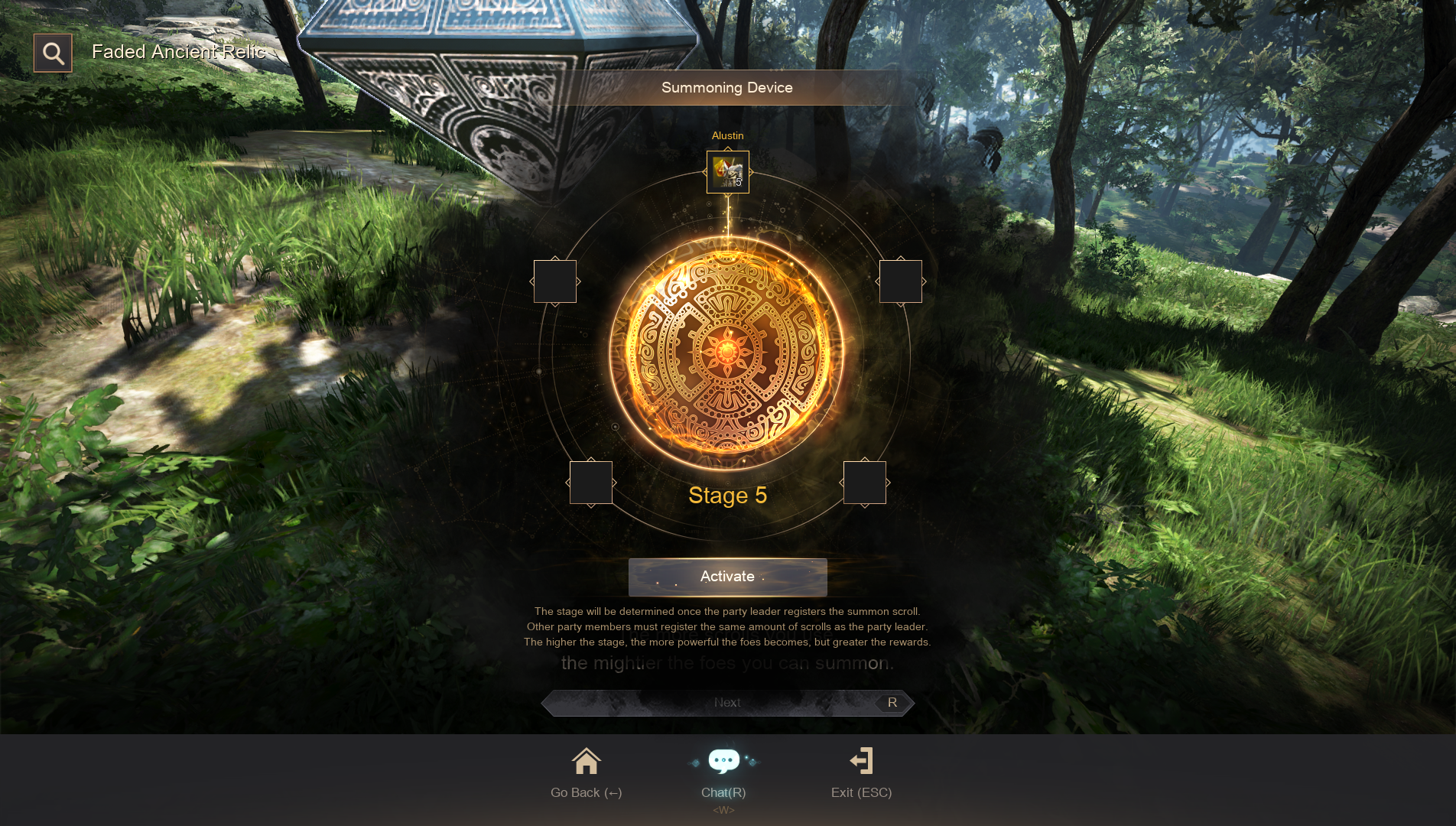 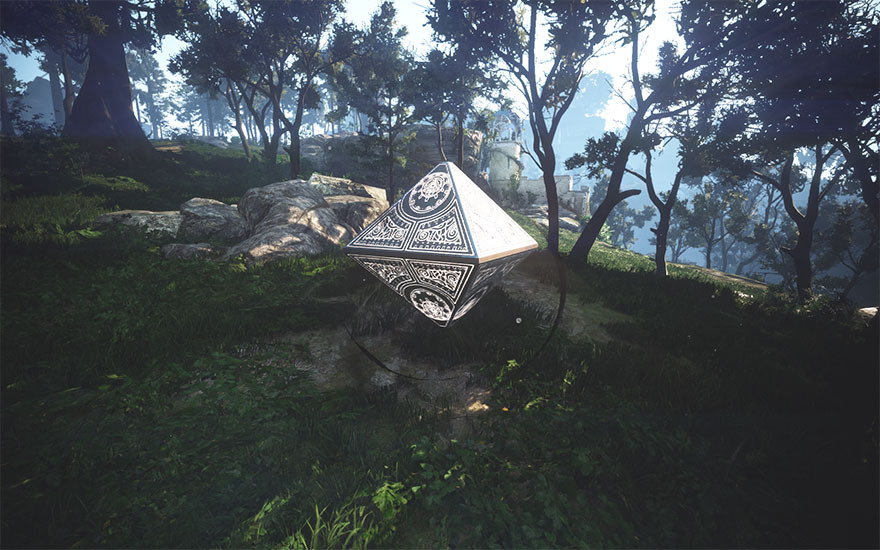 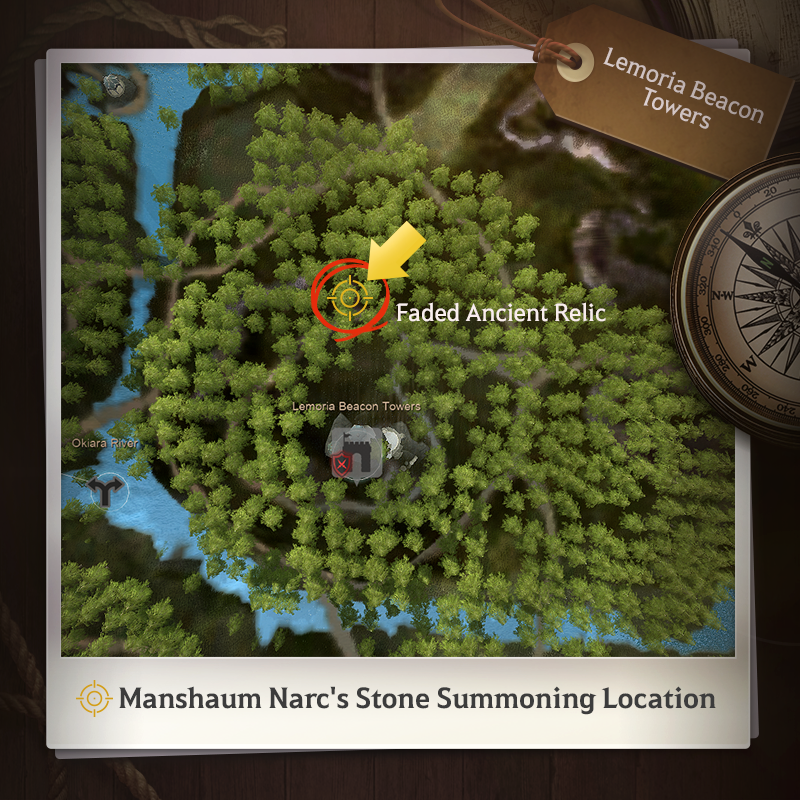 * Reduced the amount required for trading each of the following goods:

* Removed the following trade goods from the lists:

As we mentioned in the GM note, we're implementing a bunch of changes such as reducing the weight of Imperial Delivery boxes, improving the Item Recover function, etc.
We're thankful for all of our Adventurers and their constant feedback, and we look forward to hearing your thoughts on these new additions as well.
● Changed the weight of the following cooking and alchemy boxes used for Imperial Delivery to 10LT:

As we mentioned in the GM note, we're implementing a bunch of changes such as reducing the weight of Imperial Delivery boxes, improving the Item Recover function, etc.
We're thankful for all of our Adventurers and their constant feedback, and we look forward to hearing your thoughts on these new additions as well.
● Added new Alchemy recipes to craft Purified Lightstones.
- Added a new exchange with the Wandering Alchemist Dalishain. Characters that have Alchemy Guru 1 or higher can hand over lightstones to receive "Magical Lightstone Crystal," which is to perform the newly added alchemical formulas.

● Improved Liana's Tool Bag to quickly swap stored tools with other Gathering tools in your Inventory.
- Can be instantly swapped out by pressing RMB on the Gathering tool while having the Tool Bag opened.

● Improved the descriptions of the following items to clearly show how to obtain and use them.

We originally made the ability to use certain skills while auto-running on a mount available to Adventurers with high enough mastery in Training. Considering how much more difficult it is to level Training compared to other Life Skills, we had initially set the bar to "at least Artisan 1," but found that not as many Adventurers were using this ability. With the hopes that many more Adventurers will enjoy this ability, we decided to lower the requirement to "at least Professional 1."
● Lowered the requirement to use the function which automatically used certain skills while auto-moving on mounts.

We've added some side quests for world-building purposes.
We plan on adding more quests like these where you, the Adventurer, will be helping out random NPCs, both changing the in-game world for the better as you get a better understanding of said NPCs, thereby breathing new life into the immersive world of Black Desert.
● Added several new side quests in the world of Black Desert.
- A child with a beautiful voice is afraid to sing before others in the streets of Calpheon.
- A soldier stationed at Trina Fort is exhausted by the ongoing war.
- Cries for aid can be heard from the Falres Dirt Farm and Bain Farmland in Calpheon.
- A bounty hunter at the Dancing Marlin Tavern near Velia wharf has a strange tale to share.
- Constante, innkeeper at the Golden Toad Inn, has a tale to share about a familiar face from Balenos. (Available if you've completed [Balenos] [Crossroad] The Aged Chief's Last Gift)
- A merchant who's left for the Ibellab Oasis has yet to return to Valencia.
- Benns Joanna of the Lamute Gang has a tale of a unique friendship on the isle of Papua Crinea.
● Added [Elvia] Darkness Upon the Saunil Battlefield to the Suggested questline of [Combat] The Tale of the Godr-Ayed Weapon.
※ This quest rewards you with a substantial amount of Scorching Sun Shards (once per Family).
● Merindora, the Eldest Spirit in Grána, wishes to share the tale regarding the "Godr-Ayed weapon" to even more Adventurers. Now you can hear about the story behind the Godr-Ayed weapon even without a TET (IV) Blackstar weapon in possession.
- Changed the quest acceptance condition for "[Godr-Ayed Weapon] Merindora's Calling" as follows:
* Before: TET (IV) Blackstar weapon in possession
* After: From Lv. 60
- Changed the quest acceptance condition for "[Godr-Ayed Weapon] In the Fallen God's Name," which converts your TET (IV) Blackstar weapon into a Godr-Ayed weapon, as follows:
* Before: Complete "[Godr-Ayed Weapon] Merindora's Calling" and Blackstar weapon in possession
* After: Blackstar weapon in possession
● Nurio, the node manager of Stonebeak Shore, wishes to share the dream he had.
- Complete the "Nurio's Dream" quest to get the new title "We Got Nuri-ft Off!"
● Improved the Caphras' Worn Record #1 to 4 Knowledge entries to be learned via talking with O'Arma.
● Improved the "Use the Ancient Relic Crystal Summon Scroll and Defeat the Boss" objective on the Progression Pass to be completed even when summoning with more than 1 summon scroll.
● Changed the quest objective for [Season Quest] Day 29, A Scroll of Strange Symbols.
- Quest Objective: Use the Scroll Written in Ancient Language → Use the Scroll Written in Ancient Language, then defeat Khalk
※ Can also be completed by summoning with more than 1 summon scroll.
● Changed so that the following quests don't show in the Suggested quest list while proceeding with main quests on your season character.
- [Season] First Step to Greatness, Balenos, [Season] Into the Tangled World, Serendia, [Season] Fate, Justice, and Power, Calpheon, [Season] Fixer of Turbulent Times, Mediah

Changed the requirement of the notification popping up at the top of the screen as previously mentioned in the GM notes. Previously, the notification displayed when a green item or higher was obtained. We have changed the requirement to only displaying for blue items or higher so the notification is more useful.
In the past, obtaining Black Stones was a worthy feat, but as it’s become easier to attain them, we have adjusted notifications not to display for them even though they are a red grade item.
● Changed the requirements for obtained items to appear at the top of the screen as system notifications as follows:
- Improved the system alert displayed when obtaining items from crafting, dismantling, treasure chests, looting, gathering, quests, and talking with NPCs to now only appear for obtaining items of blue grade or higher
* Only notifications for blue grade or higher items that can be registered to the Center Market will show.
* Black Stones and some items didn't show the notifications regardless of item grades.
● Changed so that cheer motion doesn't activate when obtaining Black Gem.
● Fixed the issue of a file not uploading to the Setting Archive in certain situations.
● Fixed the issue of forced PvP activating when other Adventurers attack when a character with Karma lower than 0 mounts on a cannon placed by a guild member with Karma 1 or higher.
● Fixed the issue of underwater cave mysterious light sound effects not playing.
● Fixed the issue where the image on the loading screen when entering the Red Battlefield was awkwardly displayed.
● Fixed the issue where the game would crash if your controller was disconnected during a cutscene in Gamepad UI mode.

● Fixed the issue where logging in with a Steam account from the official Community page would cause an error when redirecting back to the Community page.