How awesome would it be if you could complete quests and get PEN Accessories as a reward?

Well, the questline that gives you a PEN General Accessory is now available!

We’ll introduce how to get these accessories and their effect.

◆ What are PEN General’s Accessories?

The PEN General’s Accessories have the amazing effect ‘Extra Damage against Monsters +12’.

The 1 AP is low compared to other accessories, but the 12 extra damage against monsters effect is extremely rare.

You must complete the starting quest and get a General’s Accessory first, before you can get the PEN General Accessory. The quest can be done only once per family and only by characters between the levels 53 ~ 61.

※ The General’s Accessories can only be obtained once per family. Choose your reward carefully because they cannot be exchanged.

The General’s Accessories are enhanced using a ‘Fierce Fighting Spirit Stone’. You can get these stones by completing the quests that continues from the starting quest.

The other unique feature of the General’s Accessories is that their enhancement chance is always 100%. So if you put in some effort and complete all the following quests then you can get a PEN level accessory.

Here are the entire questline for the PEN General’s Accessories.

You can find more information about these quests or the progression of the questline by going to the ‘Suggested’ tab (hotkey ‘O’) > ‘[Lv.53] Quest to Obtain an Accessory with 100% Enhancement Chance’. 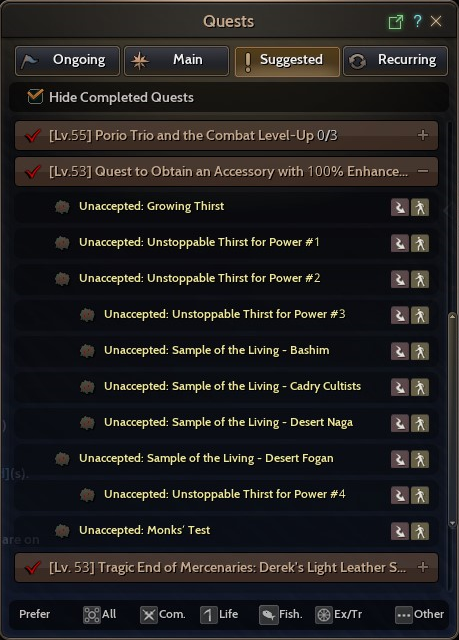 The PEN General’s Accessories are great for defeating monsters thanks to their effect ‘Extra Damage to Monsters’! Why don’t you give it a shot and get your first PEN accessory?

View list
Comments 4
Fenrirr
Lv. 60
Does the ‘Extra Damage to Monsters’ apply to bosses and world bosses?
IllJIll
Lv. 19
Extra "Monster" damage applies to any PvE mob whether human, demi-human, or otherwise. So yes, it does.
Bisquit
Lv. 62
so the Tri Cresent Ring reward that you will get when you reach lv.61 is a hoax? and this is the only accessory you can get as a reward?? a PVE ring??
IllJIll
Lv. 19
The General's Accessories are in no way related to the "Tri Cresent Ring" reward you mentioned. They are completely separate. There was no reason for you to assume they replaced the reward for lvl 61.
Cancel Register
Cancel Register
1
View list