These are the updates made to Black Desert on November 27, 2019.

- Bartering EXP is gained every time a barter is attempted.

- The amount of barter EXP gained may vary depending on the items that can be obtained on each island.

- Barter is categorized as a type of life skill and the EXP gained will be affected by Extra Life EXP Scrolls.

- Barter life skill EXP can be checked in the My Information (P) window.

- Barter Ranking can be found in Ranking.

※ Adventurers, please check your Received Mail List (B). The Barter EXP for the barters completed starting from the Barter update till now will be sent by mail.

- Parley will be consumed instead of number of barters.

- Each barter node requires different amounts of parley. Even if you have barters remained on an island, you cannot barter if you do not have enough parley.

- 1,000,000 Parley is available at the start of every barter. Parley will recover every time Bartering Information is refreshed.

- The amount of Parley required for each barter decreases as your Barter level increases.

- Crow's Trade Voucher has a 4-hour cooldown when it's used.

- Previously, Barter Information would refresh every 4 hours, but now it can be refreshed on command.

- Barter Information can be refreshed up to 3 times a day.

- There is a 4-hour cooldown each time it is refreshed.

- The number of available refreshes per day will reset at 6:00 AM (server time).

※ Barter Information can be kept as long as it is not refreshed.

- Changed the increments of materials needed to 100's for Lv. 1 Sea Trade Goods.

- However, places that required less than 100 materials were changed to increments of 10.

* If Lv. 4 -> Lv. 5 trades were available in the surrounding waters before this update, then barters with Cholace Chico's Pirate Union and Shipwrecked Cargo Ship will be available after the update.

- Added the ability for sailors to Seaweed and Bottle of Sea Water. Sailors will gather these items when exploring while sailing.

- Increased the chance for sailors to repair the ship.

- Increased the chance for sailors to hoist up Rations.

- Increased the chance for sailors to get sick.

● Added a confirmation message to appear after clicking on the "Refresh" button on the Barter Information window.

- Barter Refresh Count +1 (A total of 4 refreshes per day)

- Allows you to remotely check or skip Special Barter

※ However, you are still required to go to the location with the items in your ship's inventory to complete the barter.

※ When the Value Pack effect expires, the number of barter refreshes will reduce back down to 3 and require the original amount of Parley per barter.

- Changed the menu in the top right corner of the World Map (M) to "Monster Zone Info".

- Activate the function "Monster Zone Info" to see the locations of the floating objects in Margoria.

Parley was applied for the first-time on the Global Lab and more of our Adventurers gave us their feedback. Using this as our basis, we refocused the overall direction of this system.

First, improvements were made to help gather enough lower level sea trade goods by decreasing the amount of Parley required for the higher-level goods significantly, which previously was depleted with just a few barters. This change, along with the introduction of the new system where higher Barter life skill decreases the amount of Parley required will allow Adventurers to barter even more.

Still, the nerf to level 4 bartering, arguably the most profitable barter where you could get up to 30,000,000 silver at once, from getting up to 3 to just 2 fixed will be maintained. Instead, you can now obtain up to 6 level 1 sea trade goods at a time through bartering. This is to balance the issue where sea trade goods would run out too quickly. By making changes that lead to increased income through more lower level barters, the level of difficulty and profit were adjusted.

Additionally, we made more ways to obtain materials needed to build carracks for Adventurers that dabble in the Great Expedition. We also plan on making changes to lessen the feeling of “doing homework” when building ships. Furthermore, we are preparing blue grade carrack items for our Adventurers in the deep end of the sea.

We plan to improve conveniences and more for this content, please continue to give us your thoughts and suggestions!

- The items [Conquest] Dark Contract: Ogre/Troll can be used to summon Ogres/Trolls. You can possess and directly control the summoned Ogre/Troll.

- These items can be used by the offensive side during Conquest War.

- The summoned Ogre/Troll can be possessed by any guild member.

- The summoned Ogre/Troll will disappear when the Conquest War ends.

- The "Call" button will be displayed in the top left corner when a Ogre/Troll is summoned.

- The summoned Ogre/Troll will be displayed on the World Map.

- The controls for the Ogre/Troll will be displayed in the bottom right corner when they are mounted.

- The summoned Ogre/Troll will disappear if it enters water.

* There is a small probability to obtain the item "Ogre Dark Crystal" by defeating Muraka and the ogres in Mansha Forest.

*  There is a small probability to obtain the item "Troll Dark Crystal" by defeating Quint and the trolls on Quint Hill.

* You cannot move while doing one of these three social actions. If you type the specific key while doing a default action, it will allow you to create a special action

* These social actions can be acquired from quests listed below.

- Beer for a Thirsty Worker

- If you own the item "Ocean Hourglass" you can contact Customer Support via [Support > Submit a Ticket] to receive a Pearl refund as this item cannot be used anymore.

- The cave entrance in Manshaum Forest

- The item "Poisoned Talon" can be obtained by defeating monsters at Tshira Ruins.

- Changed the requirement for Kvariak's appearance and added the following conditions:

- Kvariak will appear when you obtain the item "Poisoned Talon" by defeating a monster at Tshira Ruins.

- A system message and two beams of yellow light will appear in Tshira Ruins at the same time. The beam of light be visible for 1 minute.

- Kvariak will appear when you approach the beam of light. Defeat Kvariak to get rewards.

- Kvariak will not disappear while it is engaged in combat.

- Kvariak will only engage in combat with the Adventurer that got the item. It will not take damage from other Adventurers.

- No changes were made to Kvariak's DP. Note that the amount of damage dealt to Kvariak will start to fall off after a certain amount of AP.

- Previously, up to 5 Adventurers could get 1 reward for defeating Kvariak. Now, only 1 Adventurer will get a reward.

- Kvariak has a high chance of dropping the following items:

Eye of the Ruins Ring

- Mount the large ship at the wheel (steerer) and click the button that is displayed then press "W" once to move and use "BreezySail" continuously.

● Fixed the issue where the camel icon would be displayed when using the skill "Fore Chop" while mounted on a horse.

- This function will activate even while using the skills "Power Accel." and "BreezySail".

- This function will activate only for ships with 50% durability or higher.

● Fixed the issue where it wasn't possible to get the knowledge for Apprentice's Alchemy Box from Eileen.

● Removed some of the text in the quest summary for "Cooking Prep".

● Fixed the issue where you couldn't interact at the hut for the quest "Checking in on Colleagues".

● Fixed the issue where the % displayed would be different when the same item was in the Adventurer's inventory sold by the Trader.

● Fixed the issue where the item "Water Spirit Stone Fragment" was missing from the Polly's Forest Item Drop Information window.

● Fixed the Ship Info window to display "Damage" and "Destroyed" by type of ships.

● Added the function where you can view the market price graph on the Purchase window in Central Market by 1 Month or 3 Months.

- The blacked out nodes for completing the number of barters will not be displayed when using this function.

● Added the tab "Barter" in the My Information (P) window.

● Added a function where Adventurers can remotely check or skip Special Barters while the Value Pack buff is in effect.

- This function is available when the Value Pack is in effect.

● Improved the message displayed on the top of the screen and the key guides for Minigames.

● Fixed the issue where the text on the node information in the World Map (M) would spill out of the UI.

● Changed the Notepad window so that a scroll bar would appear depending on the length of text.

● Improved the search function for barters to not distinguish between upper/lower case letters.

● Added the information that life skill levels and Value Pack can reduce the amount of Parley required to be displayed when mousing over Parley on Barter UI.

● Fixed the issue where the design of the Griffith Helmet for Maehwa appeared to be differently designed when opened/closed.

● Fixed the issue with the Processing window where only the "Shaking" button appeared to be available and where materials could not be registered for Shaking immediately.

● Fixed the issue where an abnormal message would be displayed when clicking the Supply button twice after registering a ship with the wharf manager.

● Fixed the issue where the [Kunoichi] Sub-Weapon Exchange Coupon could not be used to change Shurikens to Kunais.

● Fixed the issue where the dye would not be applied when attempting to dye with multiple equipment pieces selected at the same time.

● Fixed the issue where the "Current Marketplace Asset Value" appeared as "0" in Storage.

● Fixed the color of some of the dialogue buttons.

● Improved the UI so that the last location checked for silver used and collected is maintained.

● Fixed the issue where the location of the buttons at the bottom of the Dialogue window in the Settings window looked abnormal.

● Fixed the UI so that the dialogue would be refreshed in real time when completing exchanges with NPCs.

● Fixed the issue where the text would spill out of the information section in the Barter Information window.

● Fixed the issue where the text would spill out of the fishing UI.

- Go to Settings - Performance Settings - NPC - NPC Settings to use this function.

- Turn on this function to remove certain NPCs that do not have functions in the of Black Desert.

- Turning on this function will not remove NPCs that were already being displayed. Log in again or go to the Character Selection window to apply this function completely."

- Uses the route with the shortest distance to the set destination. The actual time it takes may be longer due to the set route having multiple twists in the path.

- Uses the route with the least number of twists in the route. This may go in a round-about way but the ship should be able to maintain its speed while moving.

This function can be used by selecting an option in the Ocean Navigation Setting window at the bottom of the World Map (M). 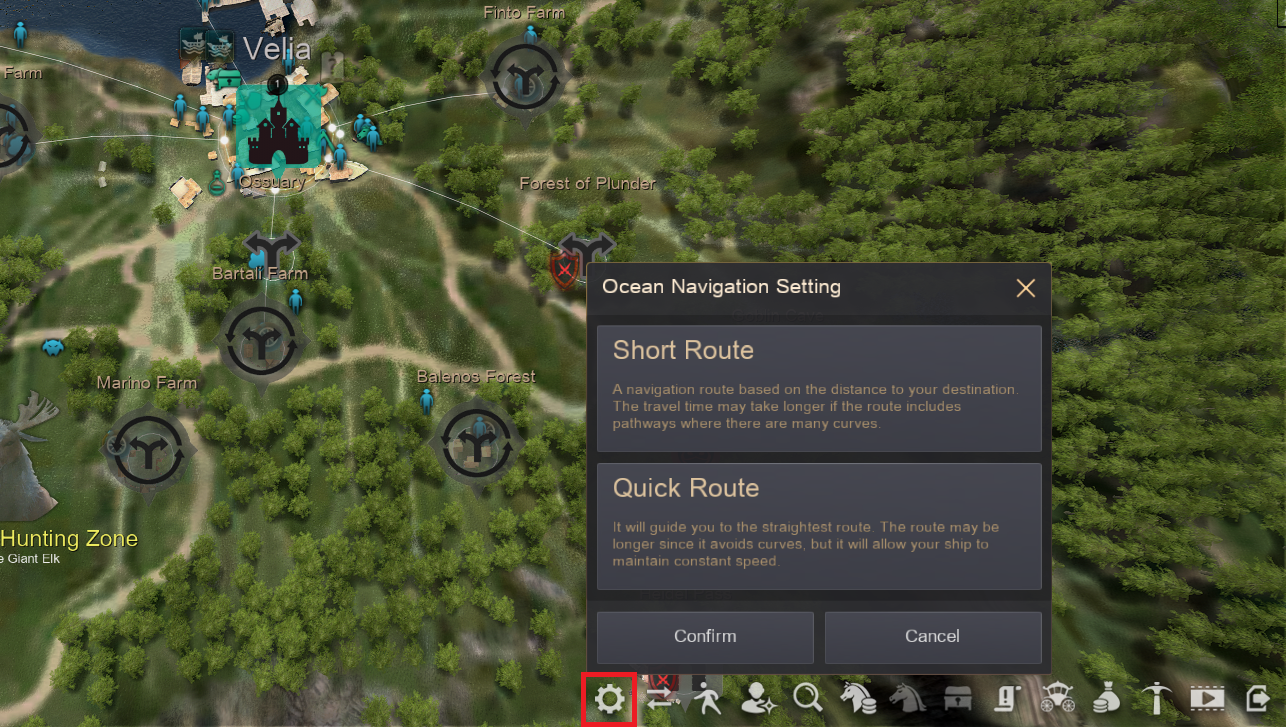 ● Fixed the issue with the location of the small island at Al Halam Sea on the minimap.

● Fixed typos in the quest "The Hidden Sacrament"

● [Maehwa] The direction of the bow and arrow are now aligned when Maehwa uses a Horn Bow.

● The route highlighted at certain location at Caudil Forest is now displayed properly on the minimap.

● Fixed an issue where dead Mutant Gargoyle around Calpheon would intermittently appear transparent.

● You no longer get stuck on floating debris when moving to the ship at Padix Island.

● Fixed an issue where the doors were not properly closed for certain buildings in Altinova.

● [Tamer] Fixed an issue where the animation would appear abnormally when using Flash Stance Shift with main weapon.