Event 3. Find the True Master of the Axe

- Customize your very own Guardian!

● Added phases to Dark Rifts where they grow more violent or weaker during a set period of time. Scholars are still researching the possible cause of this phenomenon, but for now, they have discovered that the Dark Rifts will cycle between these two phases repeatedly.

* The Dark Rift will enter Violent Phase for the following period of time. The boss monsters appearing from Dark Rifts during this phase will be stronger. Once this phase ends, the Dark Rifts and the monsters will grow weaker.

* The following monsters will become significantly stronger during this phase and their rewards will also get significantly better:

* The following monsters will appear about 30% faster during this phase:

Dark Rift was developed as a content to move away from the summoning scroll mold with boss monsters. It gave better rewards than previous contents, and depending on the difficulty of the boss, became extremely exciting as well. It has found a place in many of our Adventurers’ hearts as a great content. However, we felt that it was time for some changes to be made as we met Dark Rift bosses time and time again. Now, Dark Rift will grow more violent or weaker at a set period of time. During the Violent Period, certain bosses from the Dark Rift will become significantly stronger and they will appear 30% faster than before. And of course, with stronger bosses come better rewards to match the new difficulty. So don’t miss out on this opportunity.

- Sea Coins can be used to trade in the desert and Margoria Ocean regions.

* Added more items to the list of materials from land that can be traded for Level 1 sea trade goods.

● Increased the probability of special barters.

- Additionally, the probability of a better special barter becoming available increases according to the "Accumulated Number of Exchanges".

● Increased the basic number of character slots to 5.

● Fixed her motion to look more natural when she is grabbed by another character. ● Prime/Ultimate: Descending Current - Fixed the issue where the knockdown effect was applied in PvP.

● Prime: Beast Form - Fixed the issue where he appeared abnormal when another item was equipped while in Beast Form.

● Prime: Moonlight Strike - Improved this skill to combo faster with other skills.

● Prime: Trample - Improved to recover HP per target on hit. Adjusted the amount of HP recovered to the following:

● Prime: Whiplash - Improved to recover HP per target on hit. Adjusted the amount of HP recovered to the following:

● Tree Climb - Fixed the issue where the skill Flurry of Kicks would be used first when using this skill after Prime: Moonlight Strike.

● Flow: Arne's Guidance - Increased the damage to the following:

● Cataclysm, Black Spirit: Cataclysm - Changed the attack radius of the skill to match the maximum radius.

● Hellfire - Changed to be able to charge the skill by holding F when used.

● Flow: Fire Breath Marg - Fixed the PVP damage where before it would apply the damage for Flow: Fire Fist Marg.

● Changed skills to throw a shuriken when right-click is pressed after the following:

● Changed the following skills to activate Prime: Smokescreen when Spacebar is pressed after the skills:

● Prime: Shadow Slash - Fixed to activate Heart Aiming when LMB + RMB are pressed after the skill is used.

● Prime: Shadow Explosion - Fixed the issue where Super Armor was not applied when used after the skill Flow: Sky Stepping.

● Prime: Shadow Explosion - Added details that Super Armor will not be applied when the skill is on cooldown.

● Prime: Fox Claw - Fixed the issue where the damage was not reduced when used on cooldown and on a mount.

● Prime: Fox Claw - Fixed the number of hits to match the skill description while on a mount.

● Fixed the issue where certain effects would remain when moving after using succession skills.

● Combo: Hurricane - Fixed the issue where Air Attack was applied to all the hits.

● Rapid Stream IV - Fixed the issue where Knockdown was applied instead of Floating on the last hit.

- You can accept the quest "[Dark Knight Succession] The Conviction" from Black Spirit after completing the awakening quests.

- You will learn the skill "Wrath of Vedir" through the succession quests. It enables you to be even more powerful with your Kriegsmesser.

- You cannot use the Vediant after completing Succession.

- Added the "Succession" tab in the Skill window (K).

- You cannot use skills in the "Succession" tab to learn Absolute skills.

- You can use skills outside of the "Succession" tab to learn Absolute skills.

- You can change between Succession/Awakening by resetting your skills.

- The skill-ons on the Awakening Skills will reset when you learn Succession skills and vice versa.

- You can change from Succession to Awakening by resetting your skills to unlearn the skill "Wrath of Vedir".

- You can change from Awakening to Succession by resetting your skills to learn the skill "Wrath of Vedir". 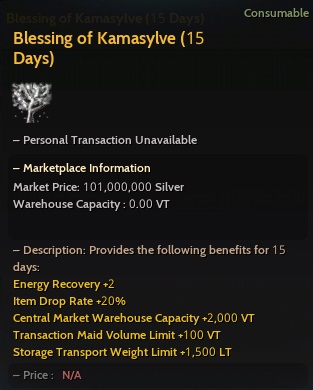 ● Added new effects to the item Blessing of Kamasylve:

● Changed the Max Prices of the following items on the Central Market:

- Ain Main Weapons for all classes

● Increased the max price limit for the following defense gear in the Central Market as the demand for them has increased.

● Changed the Black Abyssal Weapon Box rewarded for the quest "[Boss] The Overlord of Omar Lava Cave" to be used immediately upon completion of the quest.

● Changed the hint for the "Horio Tinya" knowledge.

● Added color emphasis for the text in knowledge of Spirit Stone.

● Improved the UI listed below: 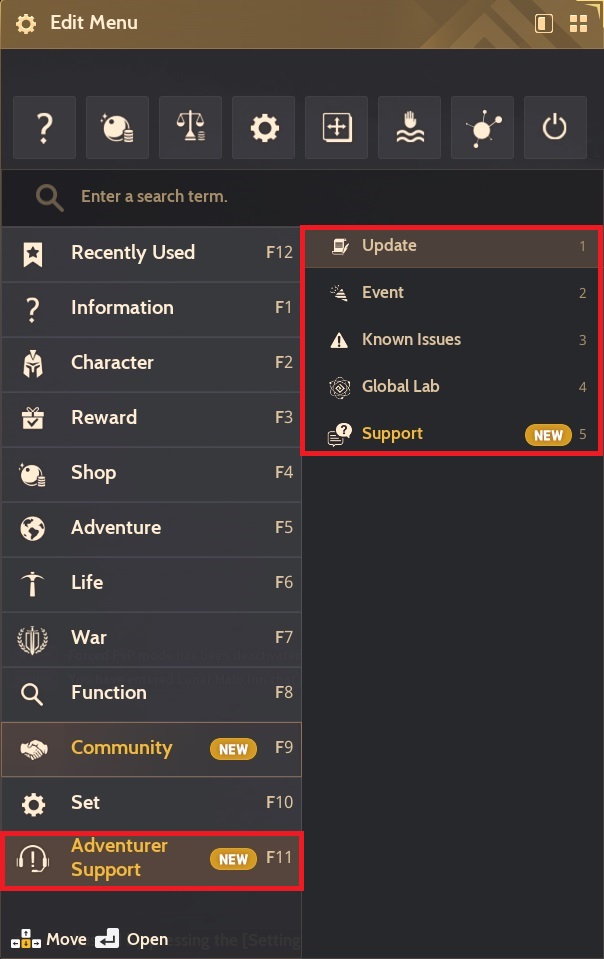 ● Changed the following in the New Menu:

Functions that are scattered between the official website and various places in the game were all organized into this new function called Adventurer Support. This was made to organize all the notices, update information, and operations related functions to a single location. This function can be found in the new ESC menu. Certain functions can still be used through the same UI as before. We will strive to make important information more easily accessible for our Adventurers. 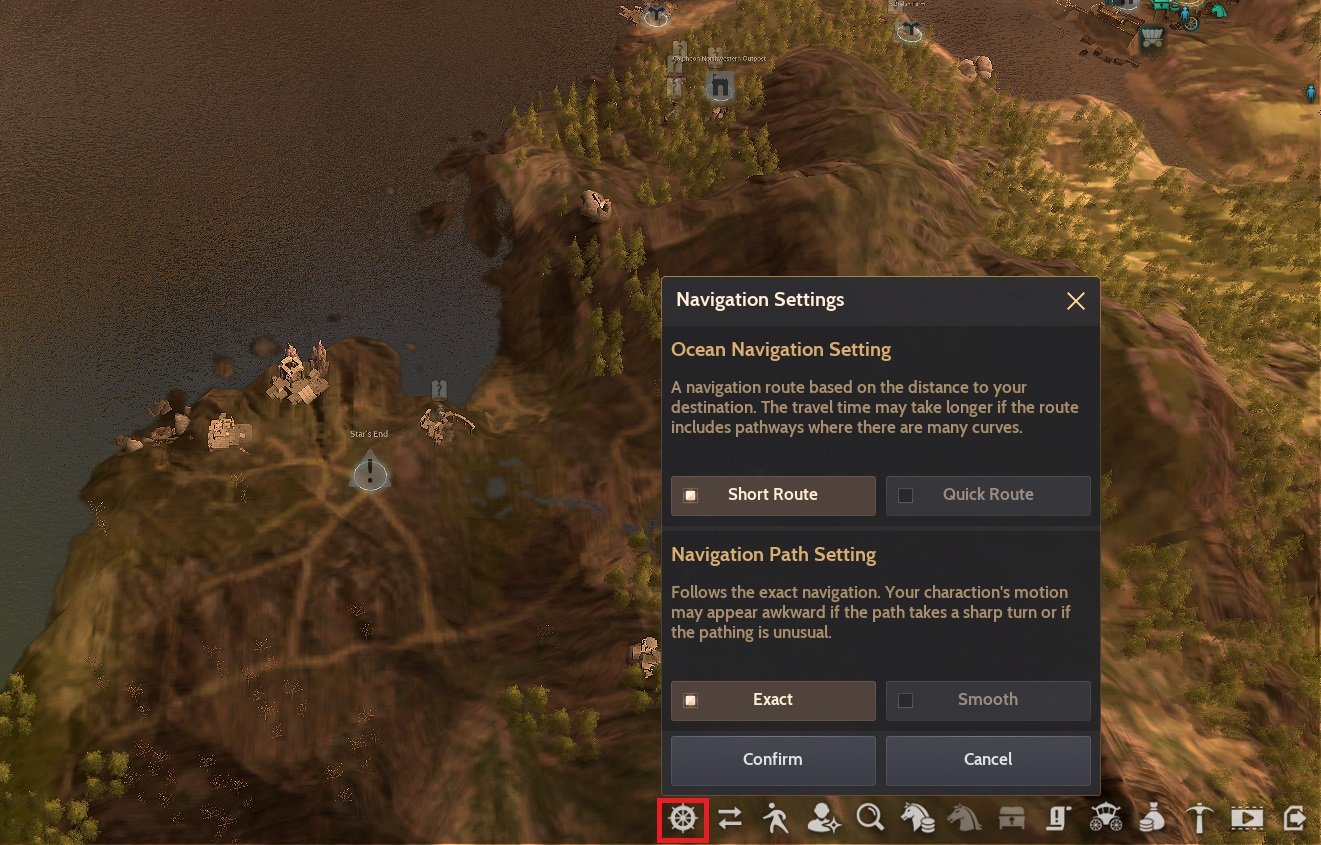 - Settings for "Ocean Navigation Setting" and "Navigation Path Setting" are available on this window.

● Changed the Ocean Navigation Setting button to a ship's wheel icon in the World Map (M).

● Highlighted the name of the adventurer in the notification that is displayed when obtaining an Archaeologist's Map or Lafi Bedmountain's Upgraded Compass.

● Pressing BackSpace while interacting with an NPC will properly function as 'Go Back'.

● When moving silver from the warehouse to the inventory, the number pad that was displayed when you click on the silver icon will now be displayed when clicking on any part of the silver related UI on the bottom of the Warehouse UI.

● Description on the worker Recover UI has been edited to be more natural.

● Fix the issue where the new chat marker looked abnormal in a 1:1 chat with a friend.

● Disabled selecting materials in the inventory while recharging, polishing, and growing alchemy stones.

● Fixed the issue where the client would close when activating the number pad by clicking on the materials in the alchemy stone growth window.

● Changed the design of the check button on the number pad.

● Fixed the abnormal background image of the key guide at the bottom of the NPC quest.

● Fixed the issue where the storage window would cover the inventory when opening the storage through a container after opening and closing the transport window.

● Fixed the issue in the Extract Reform Stone window where the size of the Extractable Item list would change when deselecting an item from extraction due to insufficient materials.

● You will no longer be able to select items in the Repair tab of the processing window if you do not have knowledge on Repair.

● The storage window will open on the right side of the processing window when processing from the storage.

● More detail has been added to the tooltip description for Privacy Mode in the character selection screen.

● The Privacy Mode button design has been changed to make it more visible on the character selection screen.

● Changed the shapes of the diamond shape buttons, check buttons, and radio buttons to squares.

● Removed the delay when moving items from the inventory to the warehouse past the weight limit.

● Fixed the issue where the actual bleeding damage of [Maehwa] Prime: Charged Stub Arrow was different from the tooltip description.

● Fixed the issue where the Underwear Settings would not function properly when activated while wearing an expired pearl item.

● Fixed a typo in the Rugged Valley Helmet description regarding how it can be obtained.

● Improved the issue where weapon effects would flicker in certain angles after selecting Settings → Anti-aliasing → TAA.

● Fixed the issue where desert debuffs were applied in certain areas of Aakman Temple.

● Fixed the issue where grass looked as if they were floating in certain areas of the Desert Naga Temple.

● Fixed the issue where desert debuffs were applied in certain areas of Pila Ku Jail.

● Fixed the issue where Bottle of Sea Water could be gathered near the small waterfall at Oquilla's Eye.

- Now you can gather Bottle of River Water near the waterfall at Oquilla's Eye.

● Fixed the issue where the ship's tooltip information would not be displayed right after checking a ship in.

● Fixed the issue where the Friend List window would close when hit, regardless of the settings.

● Fixed the issue where the cooldown time of an alchemy stone in the inventory would be displayed when logging in.

● Fixed the issue where the Market Price would not load instantly on the tooltip of certain items.

● Fixed the issue where the screen would look black when opening the World Map (M) after adjusting gamma to the lowest.

● Fixed the issue where the fishing chair would be stuck on the hand while standing up for [Warrior, Ninja, Striker, Archer].

● Improved the following weapons to have sparkling effects for Succession on Very High Graphic settings.

● Fixed the issue where the crafter's name would sometimes not be displayed in the description of PEN (V) items when they are sold on the Central Market.

● Fixed the issue of not being able to check in your Epheria Cog at the Arehaza Wharf Manager.

● Fixed the issue where using escape in certain locations of Sycraia would teleport you to the lower zone.

● Added Guardian to the top of the character creation window.

● Fixed the issue where using a Memory Fragment would only repair the max durability of Ultimate Akum gear by 2.