These are the updates made to Black Desert on February 12, 2020.

● Added Succession for Witch and Wizard.

- You can accept the quest "[Witch Succession] Word of Wisdom" or "[Wizard Succession] Infinite Intelligence" from Black Spirit after completing the awakening quests.

- These succession quests can also be found in "Quests" ("O") under the "Suggestions" tab.

- You will learn the skill "Elemental Revelation" through the succession quests. It enables you to be even more powerful with your Staff and Dagger.

- You cannot use the Aad Sphera and Godr Sphera after completing Succession.

- Added the "Succession" tab in the Skill window (K).

- Skills in the Succession tab are affected by the AP of your main weapons and awakening weapons.

- You can use the skills both in the "Main" tab and the skills in the "Succession" tab at the same time.

- You cannot use skills in the "Succession" tab to learn Absolute skills.

- You can use skills outside of the "Succession" tab to learn Absolute skills.

- You can change between Succession/Awakening by resetting your skills.

- Skill add-ons for awakening will reset when you learn Succession skills and vice versa.

- You can change from Succession to Awakening by resetting your skills to unlearn the skill "Elemental Revelation".

- You can change from Awakening to Succession by resetting your skills to learn the skill "Elemental Revelation".

● Increased the Max HP bonus given to characters participating in Siege Wars for Balenos, Serendia, Calpheon, Mediah, and Valencia from 500 to 5,000.

- Changed the bonus to decrease by 500 for consecutive weeks a guild is in possession of a territory.

(e.g. After conquering a territory, the character will get 4,500 HP starting from the following week's Conquest War as they lose 500 from the Max HP +5,000 bonus.)

● Added the bonus Max HP given for Conquest War on the Territory Information in the World Map (M).

- The Max HP bonus applied for participating in Conquest War can only range between 0 - 5,000.

● Added information about the guild's Max HP bonus to the mousing over tooltip of the question mark of "Occupying Area" on the Guild Information window. You can see the Max HP bonus you will get for participating in Conquest War.

- The Max HP bonus applied for participating in Conquest War can only range between 0 - 5,000.

● Changed the completion requirement for "Deve's Encyclopedia Chapter 6 page 4" from Collect items used to promise an eternal friendship (2 types) to 1 type.
● Added Bartering to Guild Rank → Ranking.
● Changed the location where characters would resurrect from Caduil Forest Path to Old Wisdom Tree when they die around Old Wisdom Tree.

● Fixed the issue where footsteps and their voices could be heard when selecting Ranger, Sorceress, Tamer, and Lahn in the Character Creation window even though the character is standing still.

● Grave Digging - Increased the number of hits for the Smash Attack by 1.

● Flow: Slashing the Dead - Increased the number of hits for the Smash Attack by 1.

● Flow: Slashing the Dead - Fixed the issue where the Smash Attack damage would not be applied.

● Armor Break - Increased the hit count for when its off cooldown by 2 hits.

● Pulverize - Added the effect "Spins the target on good hits" for PVE.

● Pulverize & Flow: Tempest - Changed the hit range to be around the character and increased the number of hits applied.

● Flow: Tempest - Added the effect Down Smash on good hits.

● Merciless - Changed to be usable during cooldown.

Prime: Ground Smash - Changed the effect Bound to only be applied in PVE.

The balance patches that started from our last update were changed to not only consider PVE and PVP, but also balancing between classes, succession, and awakening. Continuing from the skill adjustments made last update, we have started balancing between Succession vs Awaking for the Warrior class.

The focus of these changes was not their actual damage, but more towards the stylistic choices that can be made between succession and awakening. We are also doing our best to keep the other classes that are still waiting for their Succession updates to go out on schedule.

● Hellfire - Fixed the issue where the skill Flame Knot would be activated instead of Lava Field by pressing "E".

● Prime: Ultimate: Divine Power - Fixed the issue where the Down Attack effect was not being applied.

● Black Spirit: Prime: Obsidian Ashes - Fixed the issue where the effects and damage did not match.

● Over Here! - Fixed the issue where a Shai not participating in Conquest/Node War could use the skill to black attacks.

● Juggernaut: Smite - Added in the skill description that Sturdy Step can be used before to combo with this skill.

- Old Moon Solvent can be purchased from Old Moon Managers for 100,000 Silver.

* The following monsters will no longer appear from the Dark Rift. If these monsters already appeared from the rift, they will disappear.

● Increased the number of Wooden Beehives that appear around Florin as the bees have started to gather there.

● Fixed the issue where you could ride guild mounts even after leaving the guild.
● Improved the Continuously use BreezySail function by allowing it to work while auto-sailing.

Say goodbye to the coin on the keyboard while sailing.

Adventurers can now use Continuously use BreezySail whenever they want.

- Added information about the requirement to use "Continuously use BreezySail" in the description that appeared when mousing over the question mark on the Ship Info window of large ships.

● Changed the karma dropped when force PVPing and sinking ships like Rafts, Rowboat, and others to 200,000.

● Changed the color of the Dream Horse Arduanatt's teeth to white.
● Improved the skill description of BreezySail found in the Mount Information window.
● Fixed the issue where the dye of the Granverre Leather Stirrups for horses looked abnormal.

● Fixed the issue where parts of Polly's Forest would be announced as Elsana Sea.

● Fixed the issue where the wrong icon was being displayed for Forest Path Wagon Flag in Crafting Notes (F2).

● Added a notification for killing an enemy guild member during Guild War.

- Kill notifications can be moved and turned on/off in UI Edit Mode.

Killing someone during war is no small matter. This notification was made to let people know of this thrilling moment.

● Changed the shape and size of the Barter Information button on the Wharf's Load Cargo window to make it easier to find. 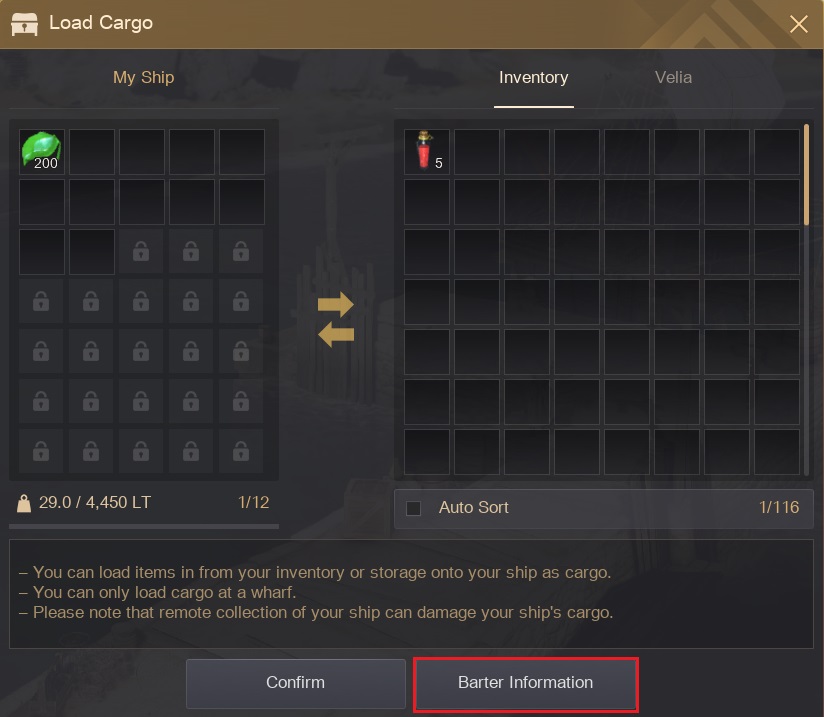 ● Added the following text in the description for Continuously use BreezySail:

● Changed the Halloween Journal to Event Journal. The journal's design was changed to fit the event.

● Fixed the issue where the text for the Farming Guide in the Installation List window of Place Mode was too long and overlapped with the Retrieve All button.

● Fixed the abnormal graphs that were displayed in the trade Quotation Board.

● Fixed the issue where the wrong name was being displayed as the Party Leader in the Find Party UI.

● Fixed the issue where the incorrect descriptions were being displayed for certain skill add-ons in the Skill Add-on window.

● Fixed the issue where the highlights were being displayed abnormally when there was nothing for that month in the Journal tab of My Information window.

● Fixed the Combat Fame description to be displayed around its icon in the Basic tab.

● Fixed the issue where the character would not stop processing unstackable items in storage.

● Changed the layout of the Crop Information UI of crops planted in Fences. The gauge for each information will now be displayed sequentially, and the UI has been resized accordingly.

● Fixed the issue where abnormal text would be displayed when setting Manage Workers window as Sticker UI with the World Map open.

● Fixed the issue where pressing interact(R) when talking to NPCs would disable the interact(R) hotkey in the quest window. 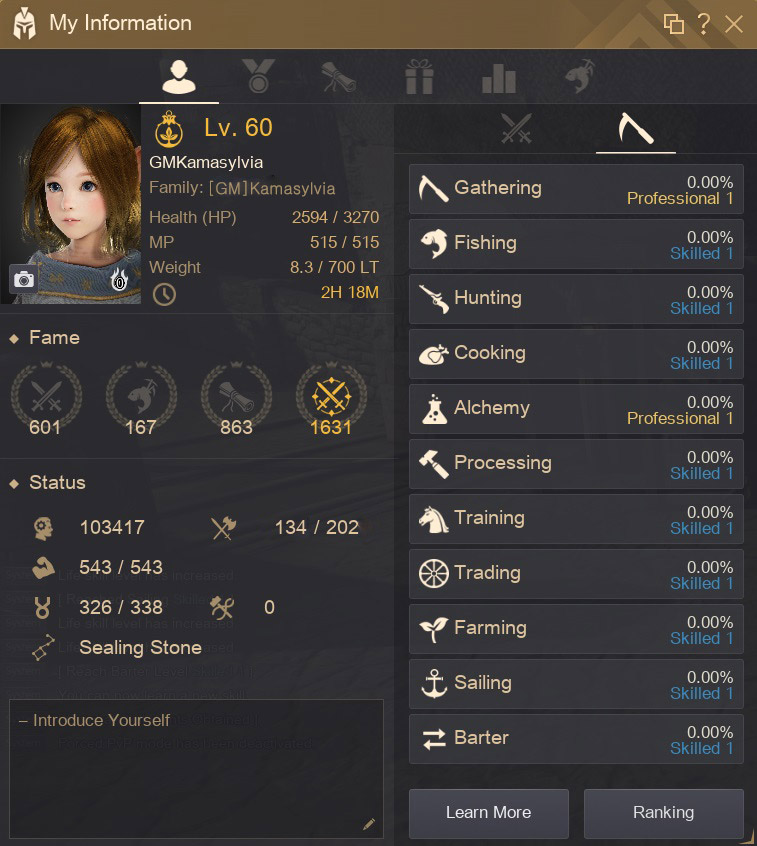 - The default size of the window has been adjusted to avoid taking up too much space on the screen.

- Basic Information was replaced with icons. Hover the mouse over the icons for details.

- The size of the window can be adjusted like before.

● Fixed the issue where furniture tooltips would not be displayed when numerous items are installed.

● Fixed the issue where the time for automatic resurrection at the closest town was not being applied when selecting Ally Viewpoint or Observe Mode upon death during Node/Conquest Mode.

● Improved the Pearl Shop (F3) by making it possible to enter numbers with the number pad when purchasing items.

● Fixed the issue where the descriptions in the Challenge tab looked awkward when adjusting the size of the My Information(P) window.

● Fixed the Load Preset function to load the Display Name settings in the Chat window properly.

● Fixed graphical glitches that occurred when equipping the following outfits:

● Modified the appearance of the Frost Iron Jordun.