PvP stands for “Player versus Player” and applies to a variety of content where Adventurers in the world of Black Desert can challenge other adventurers.

Among the PvP content available, we have Node/Conquest Wars, Guild Wars, Battle Arena, and Red Battlefield.

It gets more fun once you dive deeper into understanding how the skills of each classes work. So, be sure to practice your skills to get competitive! 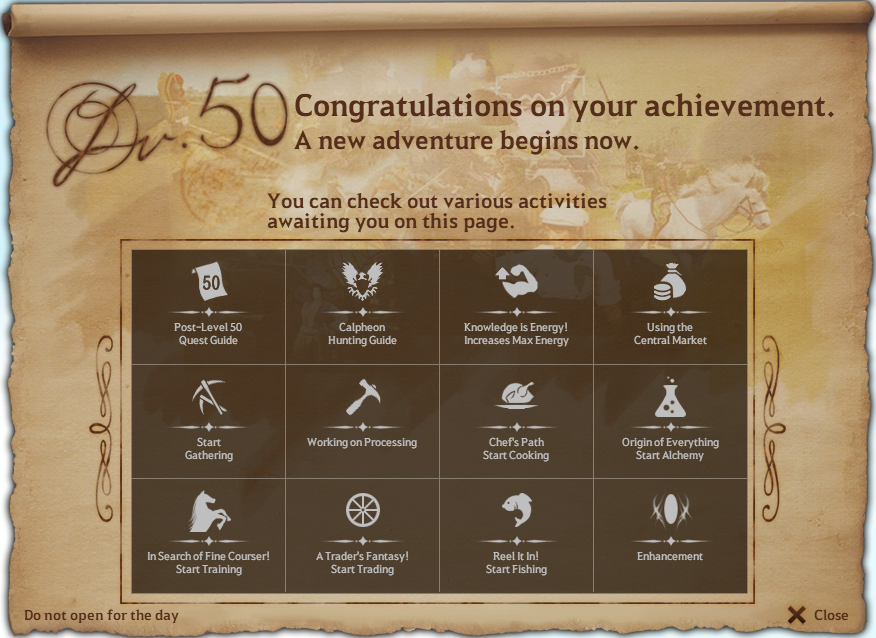 ※ Only Adventurers that have reached Lv. 50 or higher can participate in PvP content.

You can see your character’s stats by opening the My Information (P) window.

Here, you will be able to check your Fitness EXP, Ability levels, and overall combat stats. These are not an absolute requirement to enjoy PvP, however, they can make your character move faster, increase your change to crit, and more.

※ Movement, Attack/Casting Speed can be increased up to a maximum of 150% with buffs, ability levels, skill add-ons, and other effects.
However, they can only be reduced by 50% from debuffs. 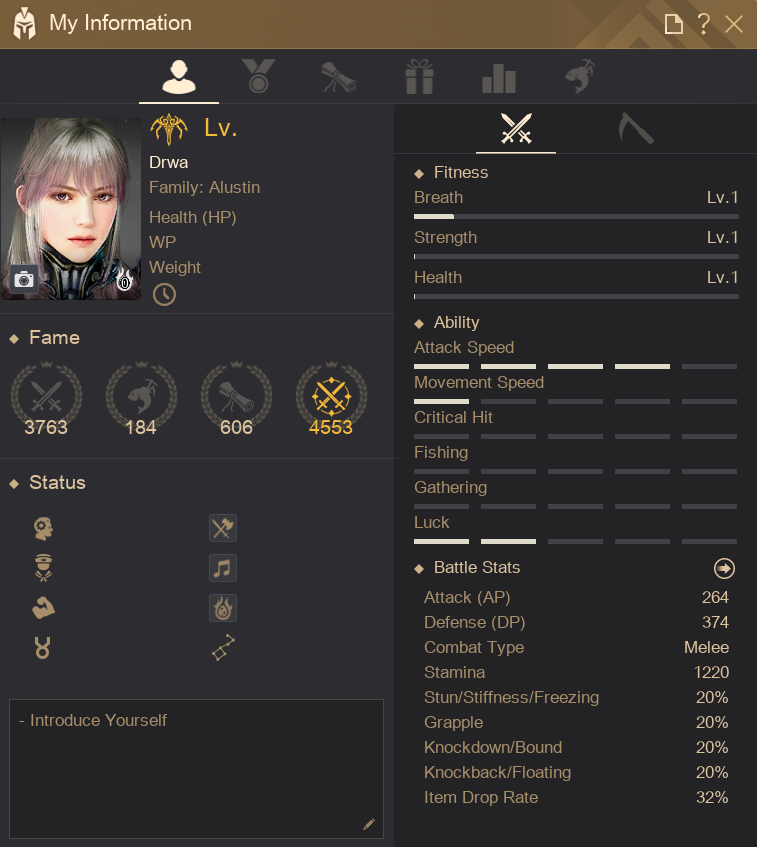 ▲ My Information (P) window that displays your overall combat stats.

(You can mouse over each stat to see additional details about them.)

How to get Fitness EXP:
You can gain Fitness EXP through various activities like walking, running, eating food, and walking with a trade pack on your back. You can also use juice items that increase Fitness EXP.

How to get Ability Levels:
Transfuse magic crystals into weapons and gear.

3. How to Understand Skills

You can view all your learnable skills from the Skill (K) window.

From that window, you can mouse over each skill to view detailed information about their damage, offensive effects, and defensive effects. 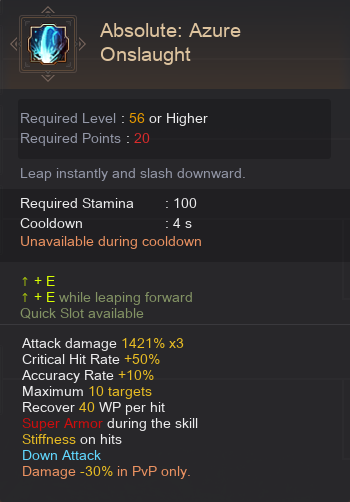 If you activate the “Skill Demo” at the bottom of the Skill (K) window, then you can see the skill’s animation, offensive effects, and defensive effects.

This allows you to visually see what the skill looks like when it is used.

At the top of the Skill (K) window, you can see the skill filter icon ().

Click on the icon to see which skills have which offensive or defensive effects.

(There’s additional details about offensive and defensive effects below.) 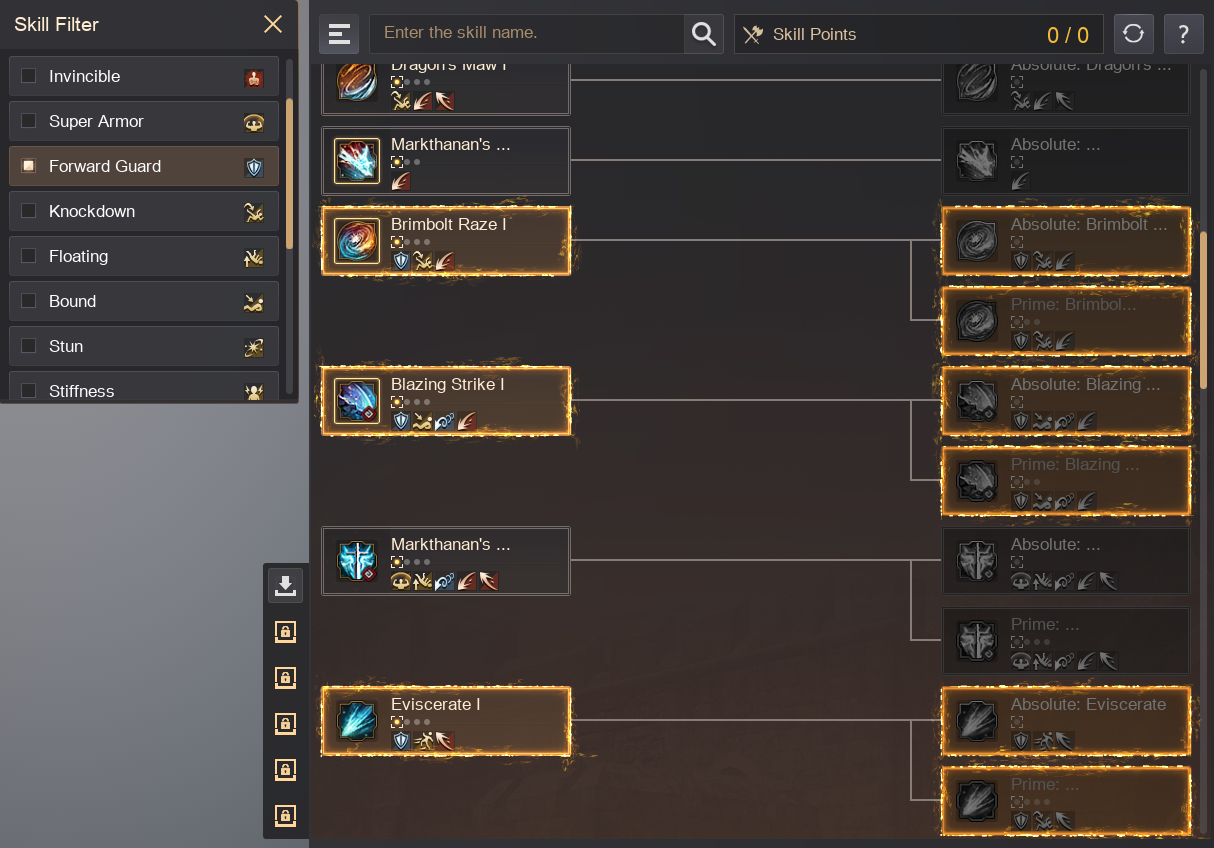 ▲ Use skill filters to get a better understanding of your skill effects.

Characters can be hit by offensive effects either by opponent skills or consumable items (like traps and flashbangs).

Some of the offensive effects have a number associated with them. When a character gets hit by 2 counts or more, then they become immune to the CC effects (excluding Air Smash and Down Smash) for 5 seconds.

* Air Smash and Down Smash do not count towards the CC count total.

* Emergency Escape cannot be used when the character is stunned or knocked down.

There are special types of damages that can deal additional damage to targets depending on situations.

Each of the classes have skills with different defensive effects. The effects are called Invincibility, Super Armor, and Forward Guard. Descriptions for the effects are shown below.

Using these defensive effects at opportune times can block enemy attacks and create an opening for you to hit them back.

Additionally, certain classes have a Forward Guard applied when they press ↓ (called an S-block).

There is also the class-specific guard skill (Default Key: Q) that sometimes has a powerful defensive effect.

You can gain Resistance against enemy debuffs to increase your chance of avoiding them (Starts from a 20% base).

When you resist an effect, the damage of the skill is applied but the debuff is not. This can then create an opportunity for you to strike back or escape.

The maximum applicable Resistance in PvP is 80%. So, even if your target has 100% resistance on their character, your attack with base Ignore Resistance will be calculated from 80%.

Still, you must keep in mind that a target hit by 2 counts or more of CC will be completely immune to CC for 5 seconds.

If you wanted to try PvP but were afraid of possible penalties that can come from it, there are a number of modes we recommend trying.

Battle Arena and other Arenas

There are arenas near Velia and other major cities where you can fight against other Adventurers without receiving any penalties for dying or killing.

Go to the ESC Menu > War > Battle Arena to enter the arena at any time.

Regardless of if you or your opponent is in a guild or not, you can interact with an Adventurer and apply to duel them.

The duel will begin immediately when the opponent accepts your duel. You can duel Adventurers anywhere in the Black Desert world, excluding safe zones.

If you do die in a duel, you can resurrect on the spot without receiving any penalties.

Here, you can duke it out with other Adventurers for 20 minutes on a battlefield of your choice.

There are not penalties applied for dying in the Red Battlefield. You will simply get resurrected at your team’s starting point and be able to run back into the fight.

This is content that requires you to be in a guild to participate.

These wars are where your guild builds a fort or Field HQ in certain areas across the world of Black Desert to fight against other guilds that are participating in the same area. Your guild wins if it is the last guild with its fort or Field HQ.

Besides Node/Conquest Wars, there is Siege War. In Siege War, your guild can utilize siege weapons to attack enemy forts.

There are not penalties applied for dying during Node/Conquest War. You will simply get resurrected at your guild’s fort or Field HQ where you can immediately jump back into the fight.

This is content that requires you to be in a guild to participate.

Your guild can declare war upon another guild, enabling your guild members to fight the members of the opposing guild.

You would typically not break crystals nor lose karma when you participate in Guild Wars.

An arena where you can fight as a team for multiple rounds.

Typically, the rounds are 1v1 duels. However, if the match ends in a tie, then the last deciding round will be team vs team.

There are no penalties for dying in Team Battle, however, it does count towards the result of the round.

There is also a version of this where guilds can face off against other guilds.

An arena that can be operated by an Adventurer through the guild and host PvP matches.

Unlike the Red Battlefield, you can invite the exact Adventurers you would like to participate in the matches and have spectators.

There are two modes in this arena, Team Match and Team Survival Match. You, as the operator, can choose the mode and rules of the match.

There are no penalties for dying in Team Battle, however, it does count towards the result of the round.

A season matchmaking PvP content where Adventurers can participate in teams of 3 in a best of 5 rounds match.

All Adventurers in the world of Black Desert have the option to force PvP after a certain level.

However, as it is forced, regardless of what the opponent may have wanted, you will be penalized in a multiple way, including losing karma.

Any character that is over Lv. 50 can press the commands Alt + C to force PvP other Adventurers.

When activated, you will be able to attack any Adventurer that is not in your part, platoon, or guild.

Attacking other Adventurers in this manner may result in you losing karma.
(However, if you are defending yourself against another Adventurer that attacks you first with forced PvP or attacking an Adventurer with negative karma, you will not lose karma.)

If your character has negative karma, then the guards in towns will come to attack you.

There are various penalties applied to characters that die with negative karma, such as the chance to drop enhancement levels on their gear.

The desert is a lawless region. Therefore, your karma won’t go below 0 when you force PvP and kill another Adventurer.

Instead, you will become a “fugitive” for 30 minutes.

When you become a fugitive, you can be attacked even if your karma is above 0 and when you don’t have forced PvP activated. Also, fugitives killed by other Adventurers will be sent to jail.

(To leave jail you must either work to repay for your crime or try to escape by dodging between the guards.)

You will no longer be marked as a fugitive once the 30 minutes elapse or when you go to jail. However, you will continue to seen as a fugitive if you die outside of the desert.