The quests in the are pretty diverse, so many players ask these questions.

“Is this quest essential?”“Do I have to complete all this? Can I skip it? I really don’t want to miss anything important.”“The only reward is Contribution Points... I can skip this, right?”

If you’ve asked yourself these questions, then we want to let you all know that you’re “perfectly normal”. Truth be told, there is an enormous range of quests available in the world of , and many of your senior (?) explorers have had the same questions. Well, then how should we go about it? Let’s have a look together as you slowly ready through this guide.

If you’ve made a straight path for Lv. 50, then the words ‘Preferred Type’ might be something completely new to you. It may look a little complicated and somewhat daunting at first glance.

However, it’s actually very easy to understand. Let’s have a look at the Quest window (Hotkey: O). If you look at the bottom of the window, you will see the words ‘Preferred Type’ as well as the All-Combat-Life Skill-Fishing-Exploration/Trade-Other to the right of it. 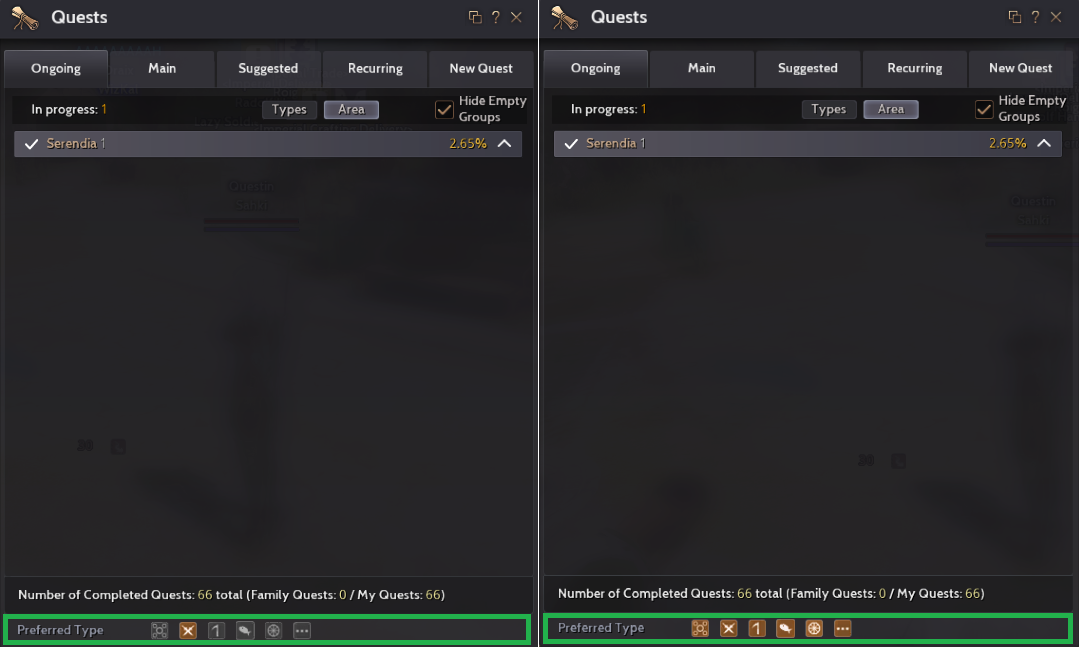 As you can probably tell from the name, the Preferred Type option is a function that allows you to only accept what you want from NPCs. If you hadn’t changed any options on your journey to Lv. 50, then only the Combat and Other options should be active. In other words, you have only been completing Combat or Other types of quests until now. You may have goosebumps at the thought of how you didn’t accept any Life Skill, Fishing, or Exploration/Trade quests until now. There were even more quests....?

Now we recommend that you change the Preferred Type to All. Because there are so many quests in , it is more advantageous if you can choose the ones that you want to do. If you have it set to all, then the NPCs will give you all the quests that you have fulfilled the requirements for. If you like the quest, you can accept it. If you don’t, then you can just reject it. 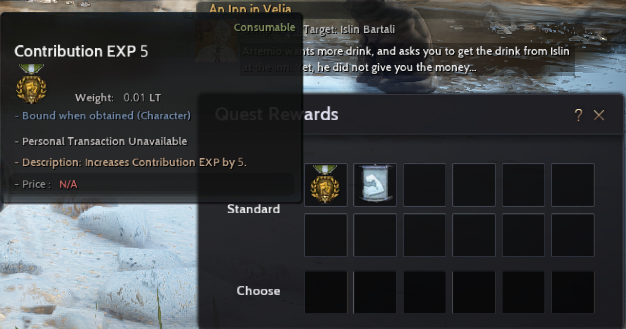 ▲ The only reward is 5 Contribution EXP, but there’s a tingling feeling it’s going to be a quest series. You make the choice.

Should I continue with the Black Spirit quests?

Absolutely. Quests from the Black Spirit are mostly main quests, so they are definitely worth doing. Although the Black Spirit can get a little annoying sometimes, it only means the best for you. So let’s treat it with affection and carry out the quests it gives us. 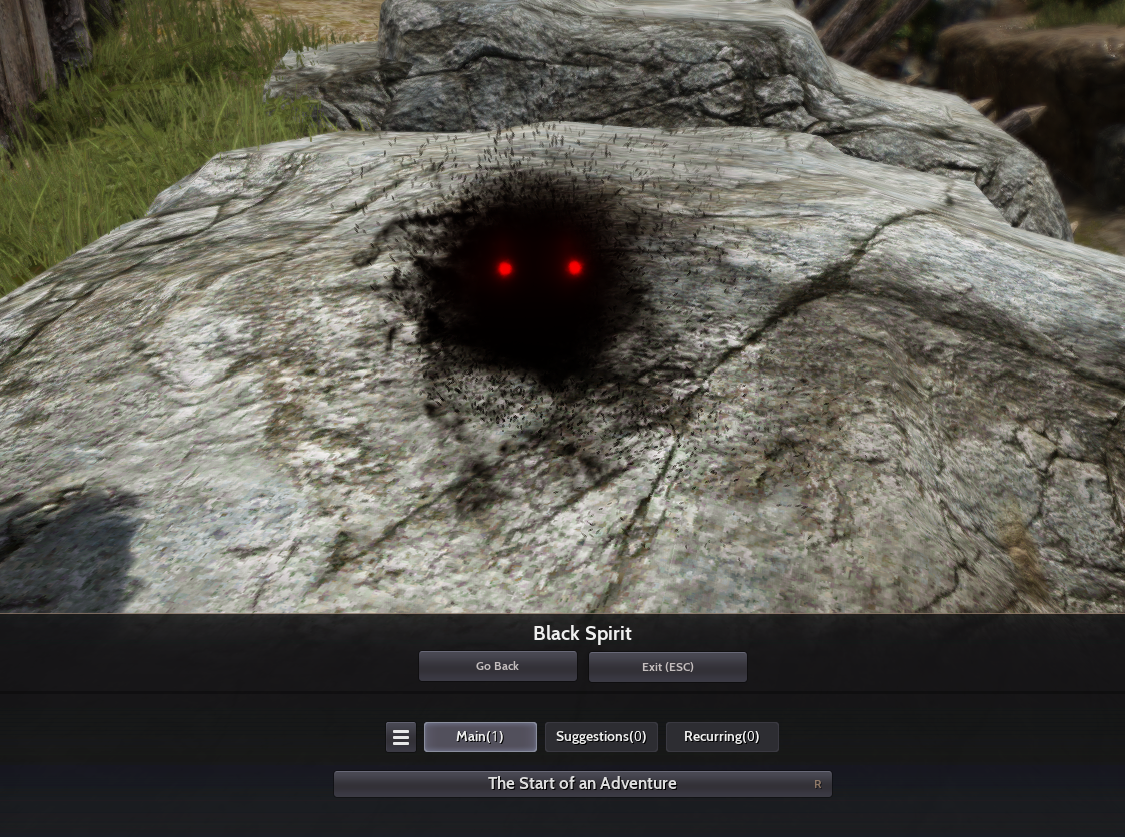 You will get to know more in detail as time passes, but the essential Black Spirit quests after Lv. 50 are as follows.

The two above quests that can be carried out after the [Co-op] Witch-Hunting has you take a big round trip across the hunting grounds throughout Calpheon. You can earn Black Stone (Weapon) and Black Stone (Armor) as well as getting a general feel for the hunting grounds, so it should be quite a ride. Hopefully, you’ll find them fun.

It is recommended that you also carry out the [Subjugation] quests from the NPCs located within the hunting ground or by the Node Manager as you carry out the above two quests. The rewards include Gold Bars, so you’ll be able to earn some money as well.

This is an exceptional quest where you can acquire an enormous amount of Black Stones. You can only accept it after completing the World of Enemies and For a Sharper Weapon quest series mentioned above. It is a hunting request, so you’ll have to hunt a fair number of monsters, but there is no better quest than this to collect Black Stones.

When you’re above Lv. 52 and you go to Mediah, the Black Spirit will give you the [A Prophet of Altinova] quest. This is the start of the main quest of Mediah, so make sure to take note if you plan to head over to Mediah soon.

Relationship between Hunting and Quests

Which is why just hunting one monster after another endlessly can get a little idle. To help with this problem, let’s carry out hunting quests as well. Take a look around the nearby town or node. You should find an abundance of available quests for that respective hunting ground. Don’t be shy and complete those quests. The contribution points and other rewards you earn from them will build up and be a great asset in the end.

If you go deep into the center of the hunting ground, you will be able to receive an interesting hunting quest from specific NPCs. The hunting grounds of Calpheon all have an NPC that gives Subjugation quests which are highly recommended to be completed with the other quests. It is similar in Mediah and Valencia as well, and you will certainly find yourself enjoying the game more if you carry out these quests.

Lastly, it can be a new and enjoyable experience to talk and listen to quest NPCs and learn what the quest is about. When you talk to all the NPCs and check the diverse range of quests, you might find one that fits your current situation. Make sure you accept that quest and complete it together with your other quests. They will all help you in the end. 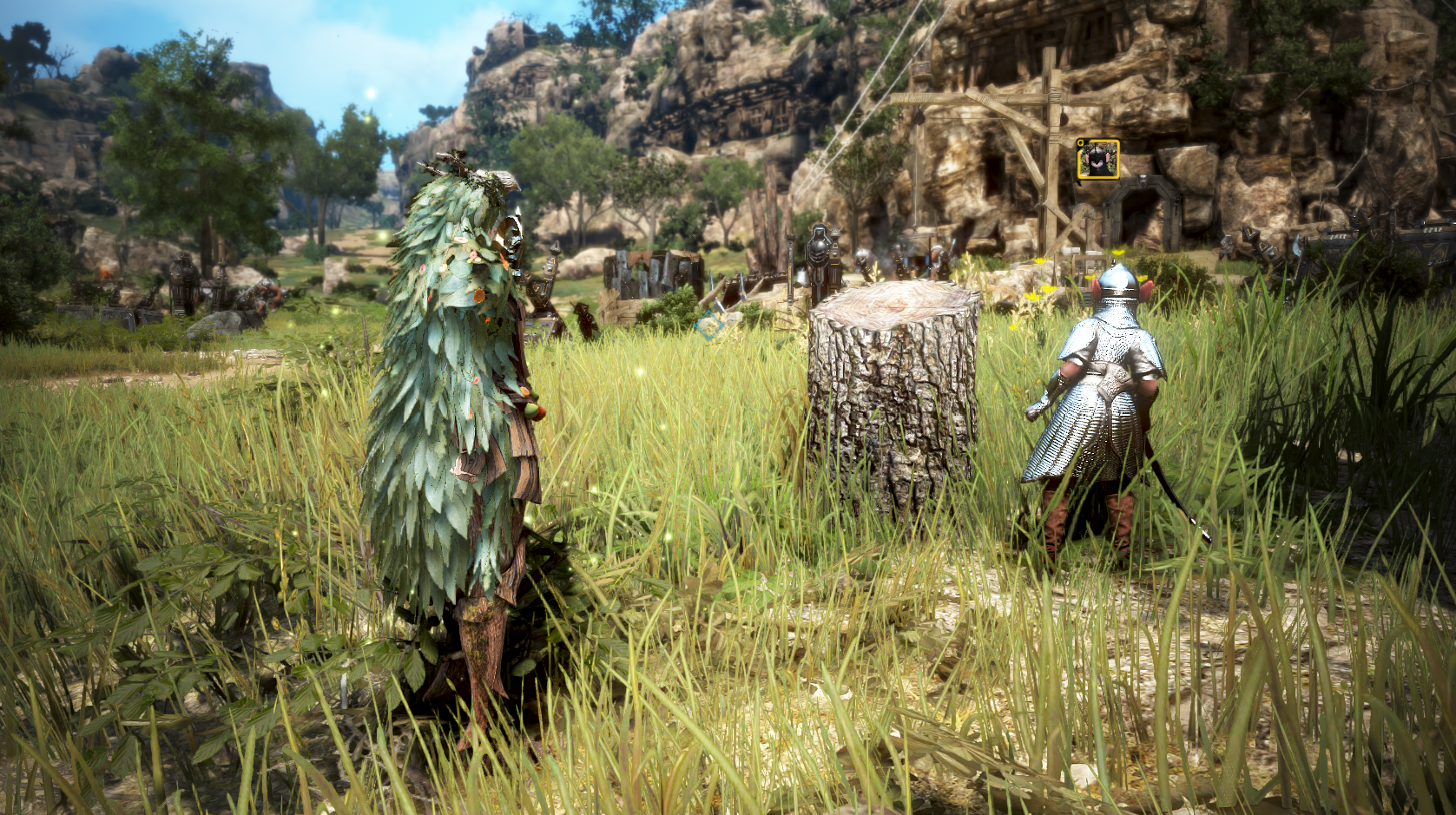 ▲ Found an NPC near a hunting ground? Then let’s accept the hunting quest and carry it out

You want to enjoy your Life? Starting Quest for everything

Why are we showing favor to the combat adventurers? That’s not true. You may not have realized it, but there are many main quests related to life skills and fishing that you may have accidentally passed by. You could just ignore these quests and just grab your pickaxe or axe to enjoy the content however you like, but you will definitely be able to enjoy it more if you try out these quests.

Then let’s summon the Black Spirit and press [Guide]. Then you will see the list as shown below.

I want to learn about Cooking

I want to go Fishing

How can I go about Trading?

These four buttons. Press whichever one you like, and it will lead you to a respective NPC. Through this NPC, you’ll be able to accept the ‘Starting Quest’ that you’ve been looking for. As you continue through all the series of quests starting from the above, you will find yourself becoming an expert in that profession.

In Balenos, you can learn everything from gathering to processing and even investing contribution points to your residence for production activity. I use the word learn, but it’s more about just enjoying yourself. As you can see from the list below, the number of available quests is huge.

These quests aren’t for someone above Lv. 50, but it’s available to anyone with a gathering level of 2 or more. That is, if you have the Life Skill option of the Preferred Type active.

Of course, this is not the end. When you head over to Heidel, there will also be a quest series like the one above. After that, you can do the ones in Calpheon. We believe that taking on quests like this will be a throughly intriguing, enjoyable, and unique experience.

Through the quests in Balenos, you can learn how to mix and use different ingredients, sort of like the fundamentals in cooking. You’ll receive most of the ingredients as the quest reward, so have fun as you practice some of your skills. You shouldn’t have any difficulties carrying out the quests until the end if you read the quest details carefully. Complete the quests below, and then head over to Serendia. There will be a similar cooking quest series waiting for you there.

Unlike the other Life Skill contents, the starting quest for Alchemy can be accepted from Glish in Serendia. This is because it involves so much preparation. But don’t let that put you off. It’s just the basic process, so try it out. If it suits you, you can continue. If it’s too difficult or you don’t have the time for now, you can come back to it later.

Fishing is a great feature, whether you do it manually or automatically. Manual fishing is especially popular among the players due to the thrill it offers. Although you can just get your fishing rod and go to any river or sea to fish, taking some time to carry out the related quests could help you delve deeper into the fishing world.

The daily quests in the capital city of Calpheon are probably the most frequently completed daily quest for most veteran adventurers. You can accept the numerous daily quests in Calpheon at once, complete them, and then repeat them the next day. Completing these Daily/Repeat quests of Calpheon every day alone is enough to quickly earn contribution points.

▲ Take a round around Calpheon to accept all the repeat quests, then make another round to complete it. You will enjoy running through and familiarizing yourself with Calpheon the first few times. Later on, you’ll find that you’ve memorized all the locations and you’ll begin to find shortcuts. Don’t forget to activate the [Other] Preferred Type in quests. 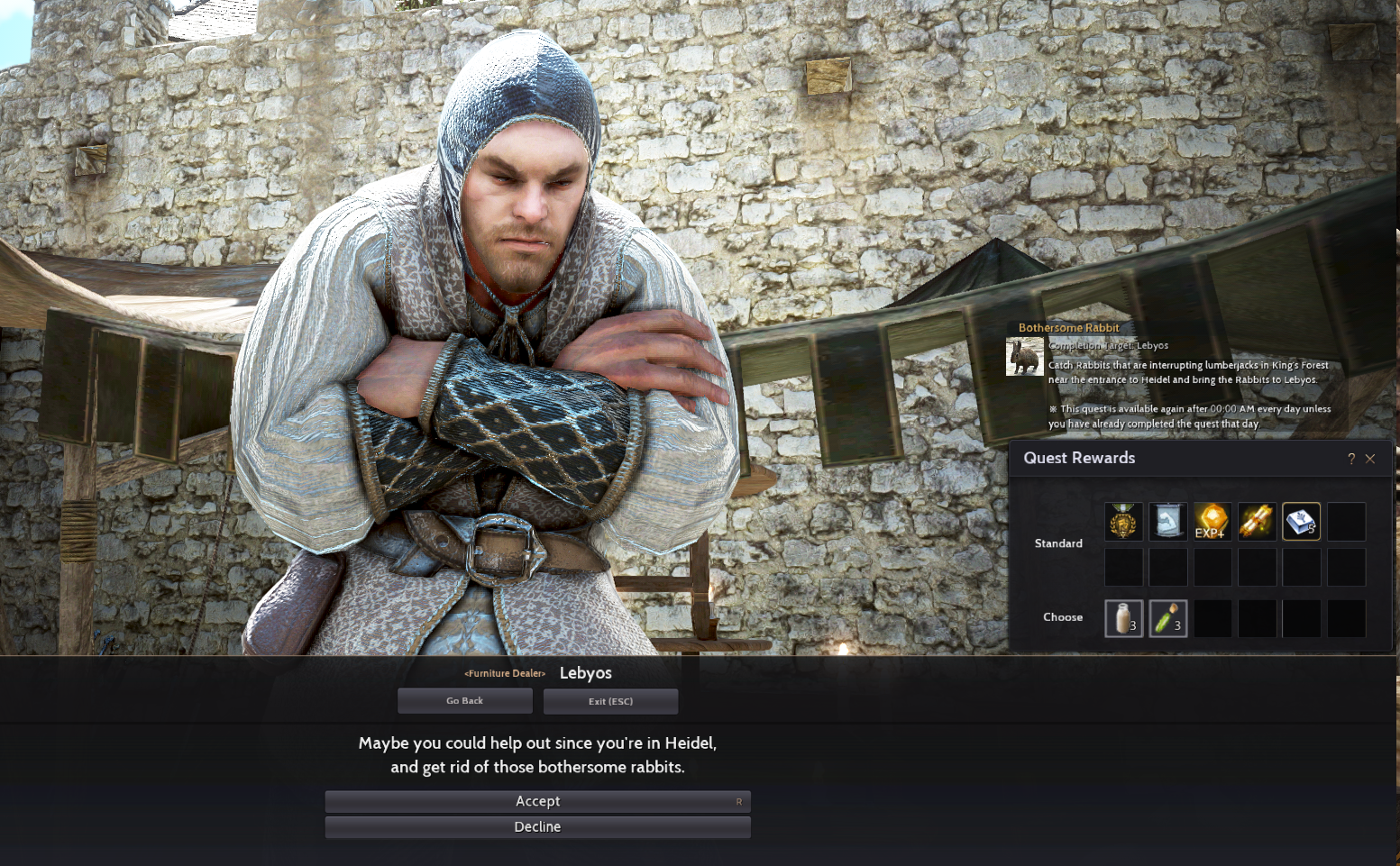 ▲ Daily quests can not only be found in Calpheon, but other major cities (e.g. Heidel) too

If you’re an adventurer who is more interested in gathering, processing, cooking, and alchemy, then Olvia is the best place to go. In Oliva, you can carry out up to 66 repeat life skill quests. These quests also reward the EXP for that respective life skill as well, so it’s a much better hot spot than Calpheon to the adventurers that specialize in life skills.

However, in order to be able to accept all 66 quests, you need to meet certain requirements. You should have at least Professional Gathering Lv. 5 and Skilled Cooking and Alchemy. Then, you will be able to accept an enormous number of quests there. 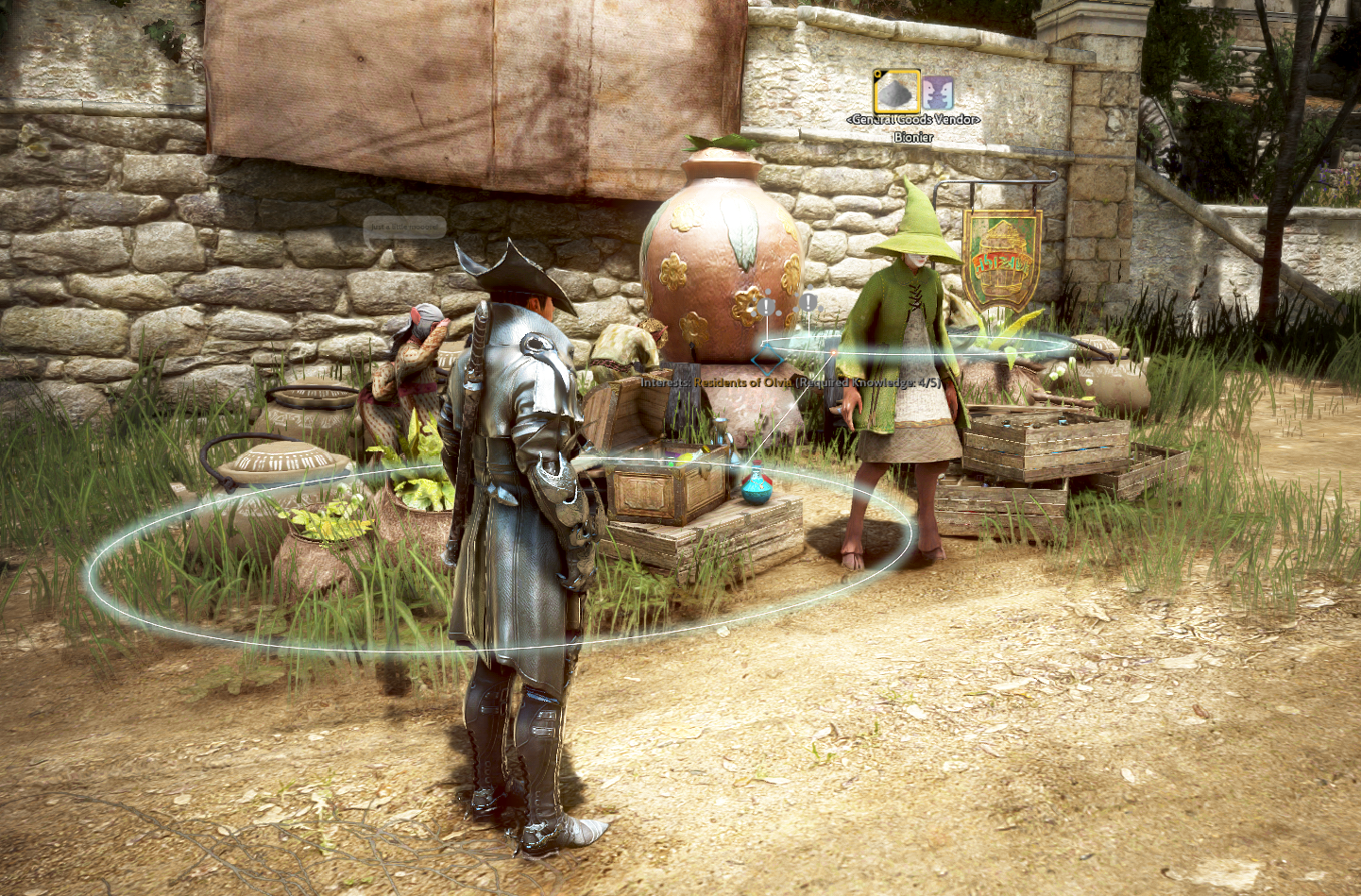 ▲ Oliva is like a paradise for the life skill adventurers that is filled with repeatable quests for them. You should visit here often as the quests not only give contribution points, but EXP for the relevant life skills as well. It also brings up old memories (?).

Only have the recommended quests at heart

◀ Press the O hotkey to view the list of recommended quests

If you had forgotten to complete one, then you can check this list and go back to it. If you don’t meet the level requirements yet, then you can set it as your next objective as you level up your character.

Once you’ve completed all the recommended quests as well, you are now wise enough (?) to help out a beginner as you say “Hahaha! This is how you do quests.”