To raise your amity with NPCs, you can do a few things. Some of them offer quests that reward Amity, you can also greet them (F5) to gain 3 Amity/3 Energy, and finally by having a Conversation with the NPC, also known as the Amity Game, which we will cover.

To start the Amity Game, you need to have enough knowledge on the NPCs interests, it will not be very efficient to have a Conversation with them, as you won't have enough options.
To check if you have enough knowledge, you need to interact (R) with your NPC of choice there will be a list of the NPCs interests on the lower left hand side corner of the window. For this guide I got 15/15 knowledge on Daphne's interest so this will be faster as you can do all the Combos. Also note my current Amity at 114. From this window select Conversation from the options on the bottom of the screen to go to the main Amity Game window.

NOTE: You can right click on each image and "Open Image In New Tab" for the full resolution. 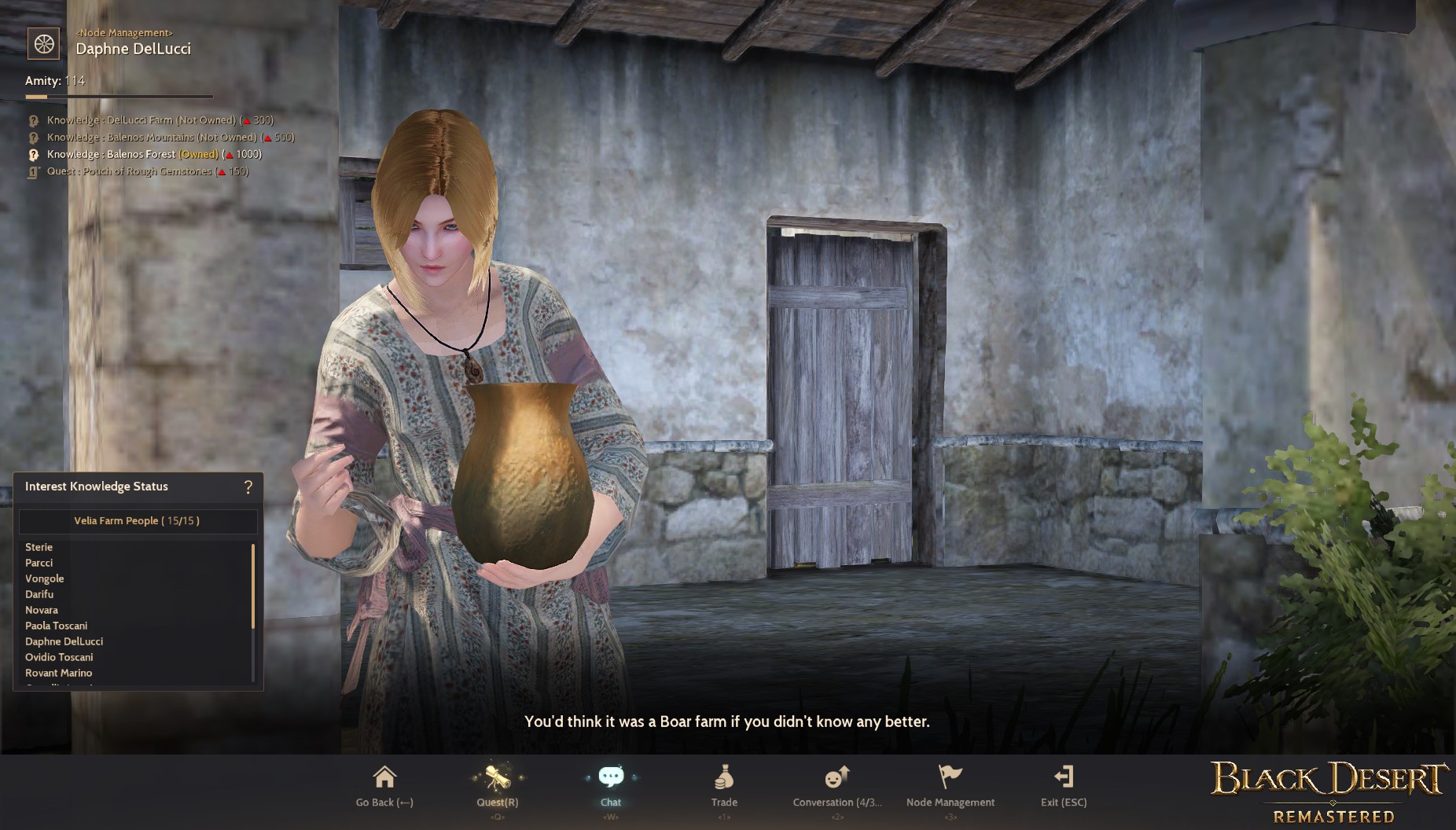 Here you will see all of Daphne's interests arranged in a semi roulette. On the lower left hand side in the Amity Game view, there will be a Requirement. Requirements vary from Talk Freely, Acquire Minimum Favor, Acquire Total Favor, Fail a Number of times, etc. and the current Interest Level and Favor of the NPC (random). 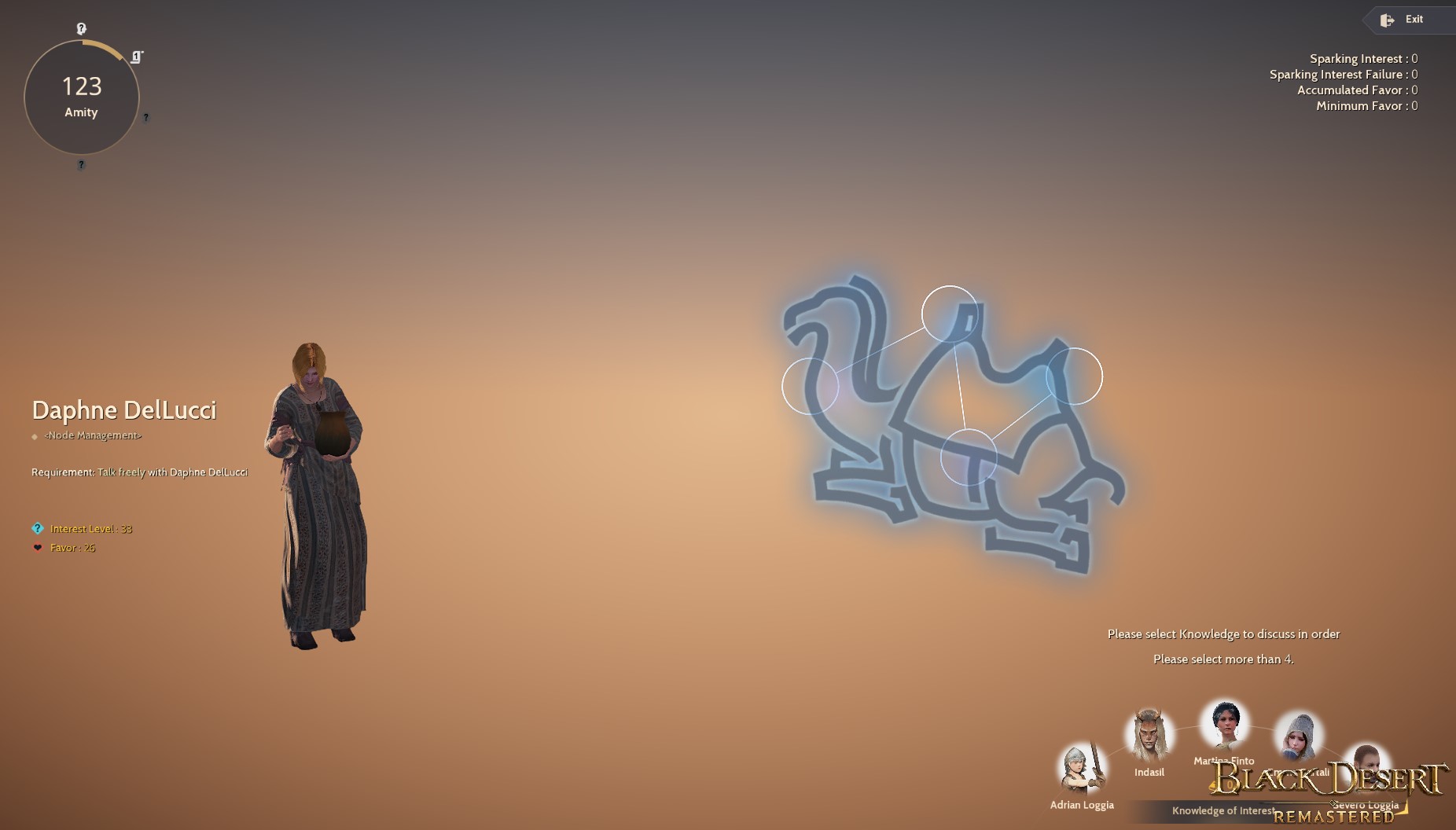 Everytime you select a knowledge it will go to their Star Sign board (Daphne is a Camel). You can scroll the knowledge list by clicking the arrow at the end of the face pics roulette (knowledge).

The pattern on the Star Sign board will tell you the order each knowledge will be placed once you select (right click) them. You can unselect them by doing the same on the board.

Once all knowledge have been placed, you will see guide arrows, which indicates the path the rolls/turns will take.

Upon knowing this, I read each knowledge's, Attributes, Interaction Effect, and Next Combo effect.

Now which knowledge will you place first and in what order should you arrange them? What I do; I always check the Interest Level, Favor and the Next Combo effect to help me decide:

A. When Interest Level is near/same/higher than the interest level of the NPC, you get a higher chance of sparking interest/smiley, rather than the fail/sad face.

B. Favor you will get is the difference between NPC Favor and Knowledge Favor. 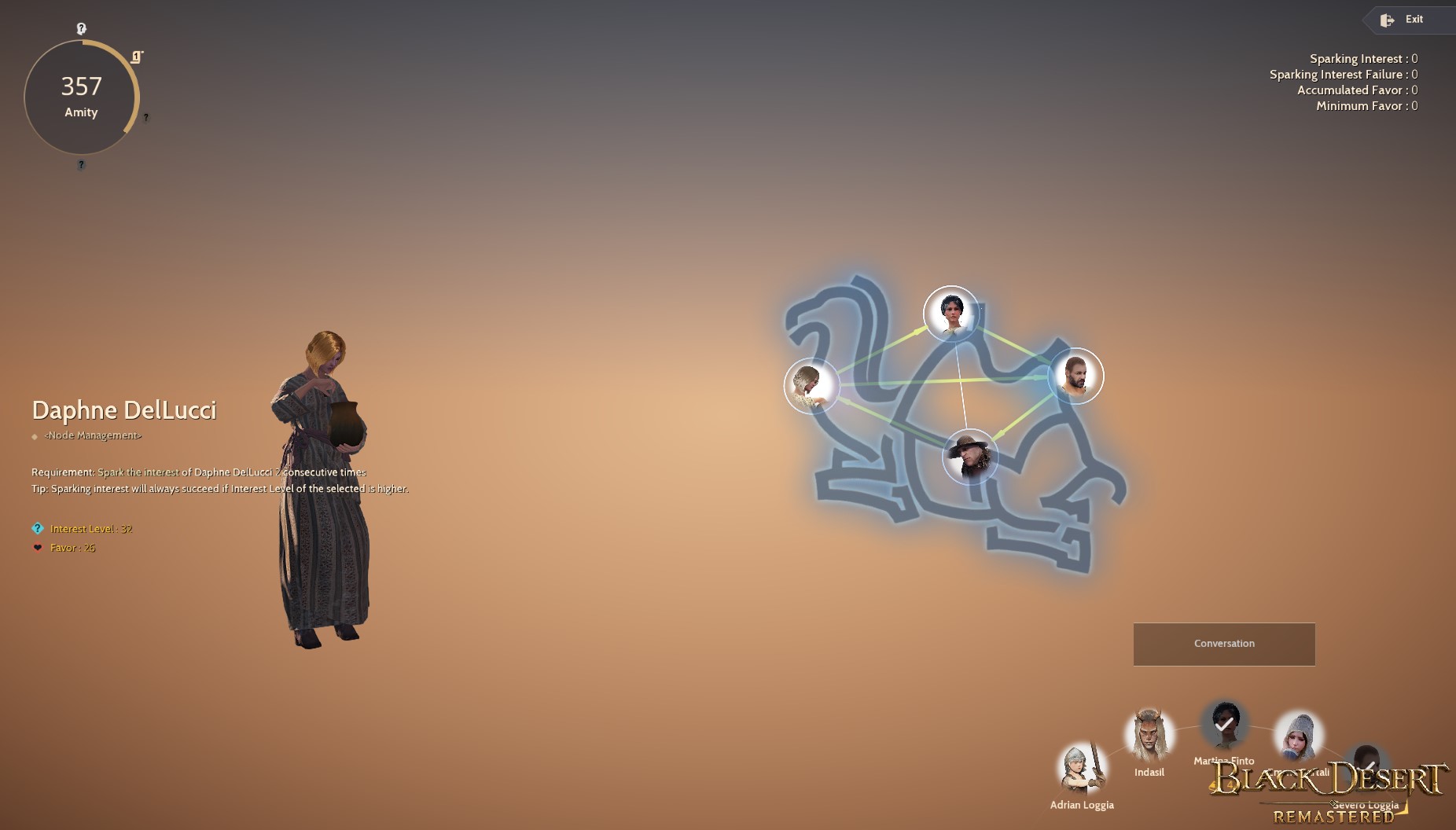 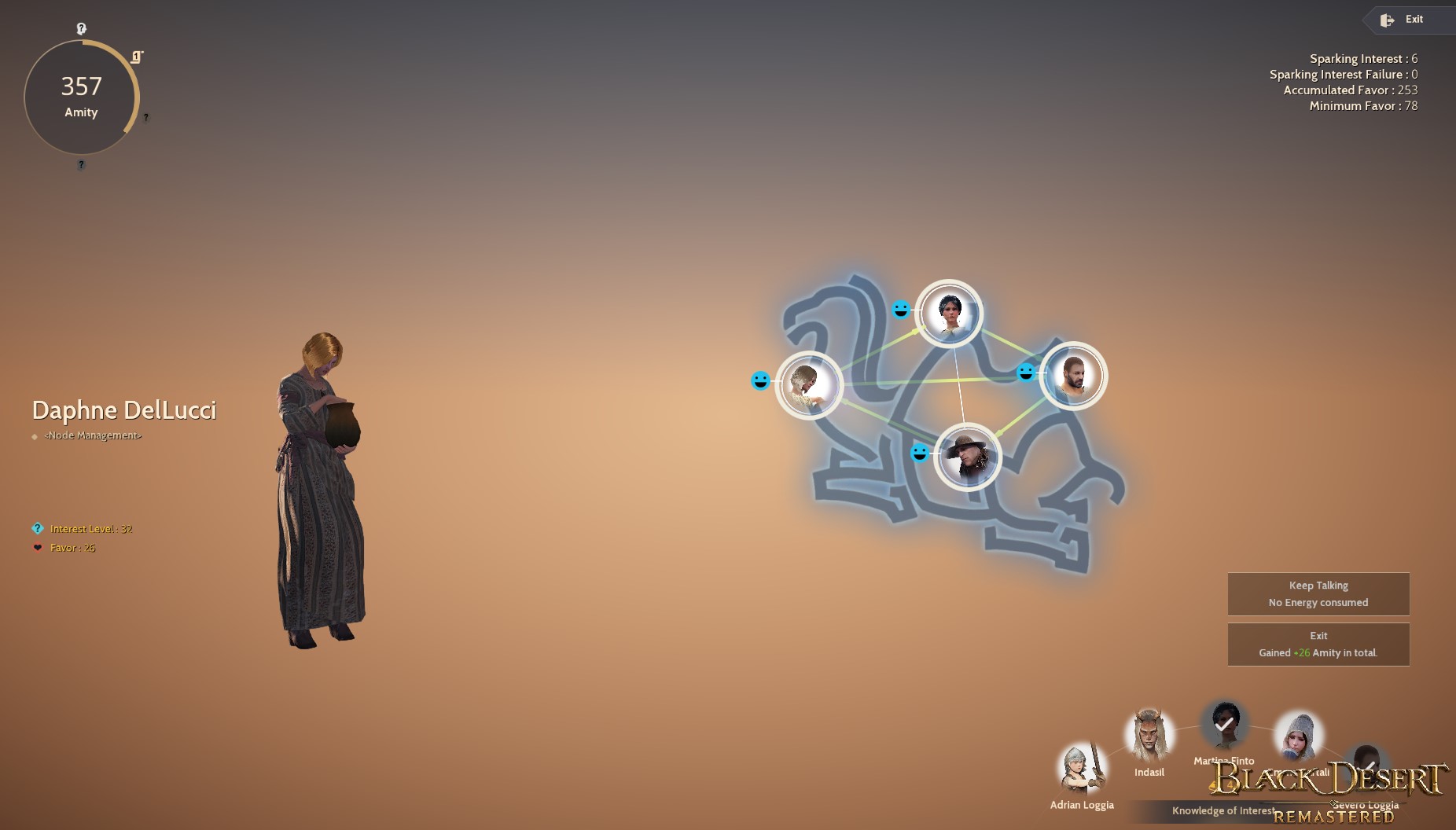 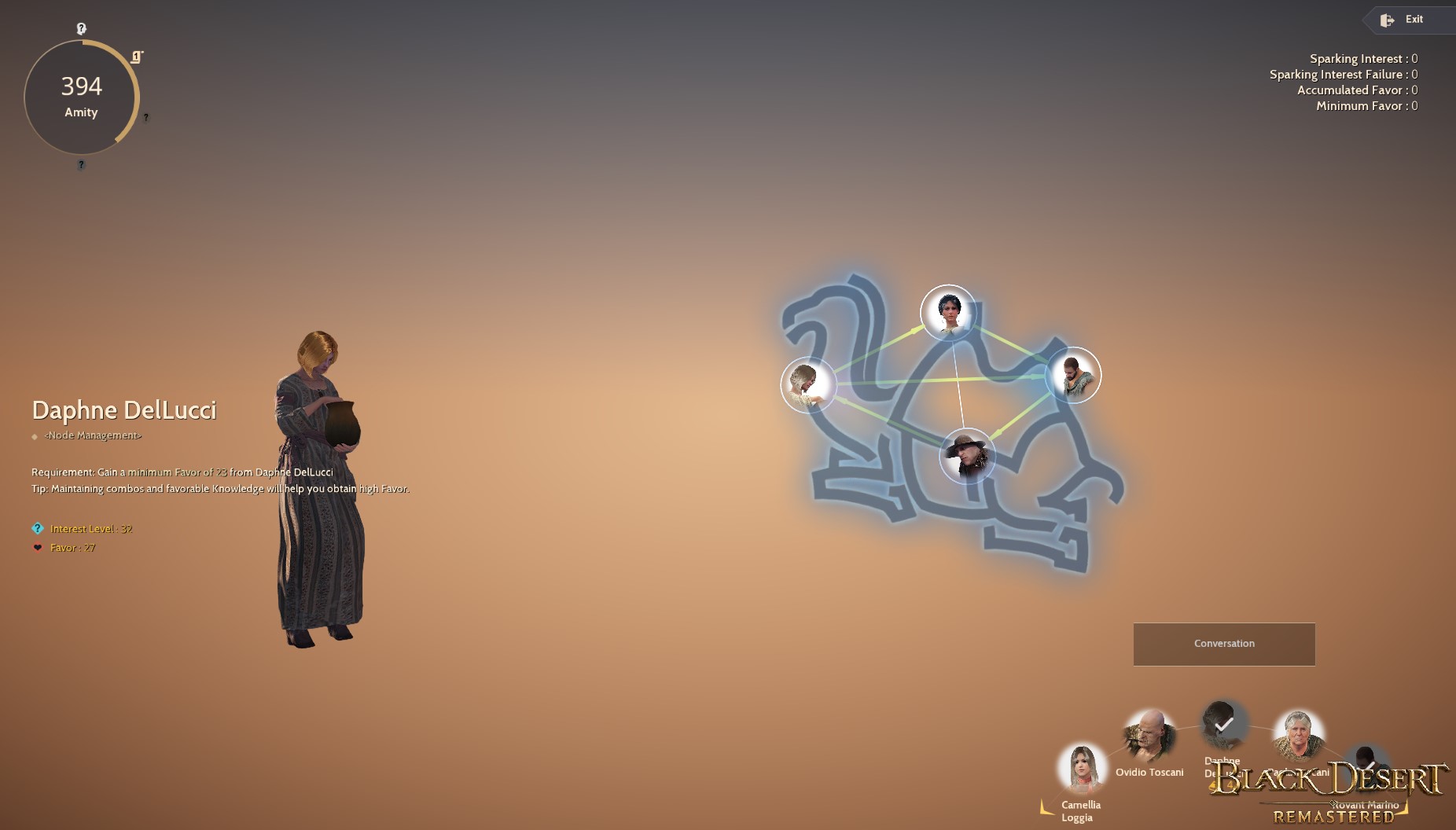 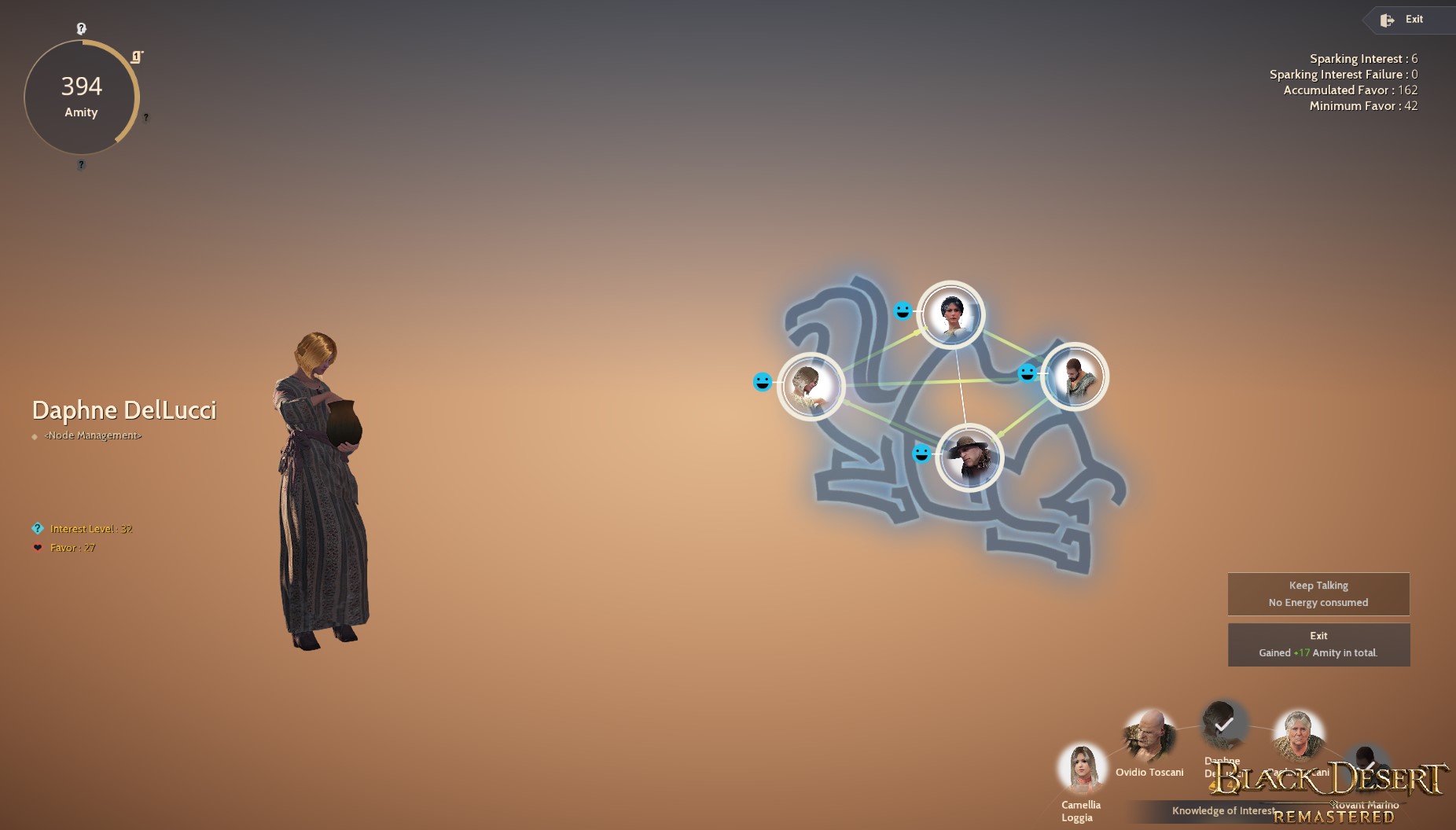 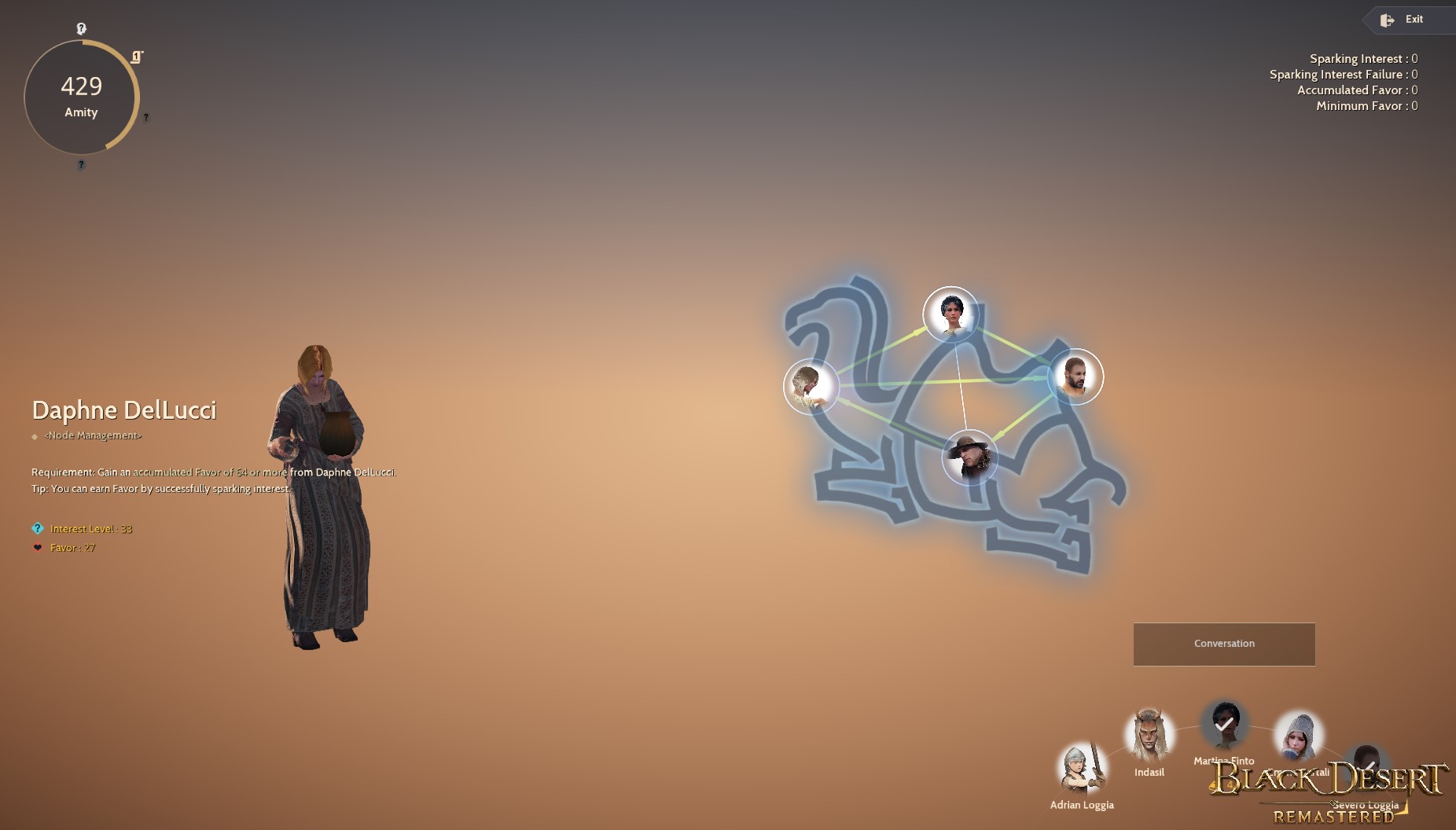 Requirement: Accumulated Favor of 64 or more
Tip: You can earn Favor by successfully sparking interest 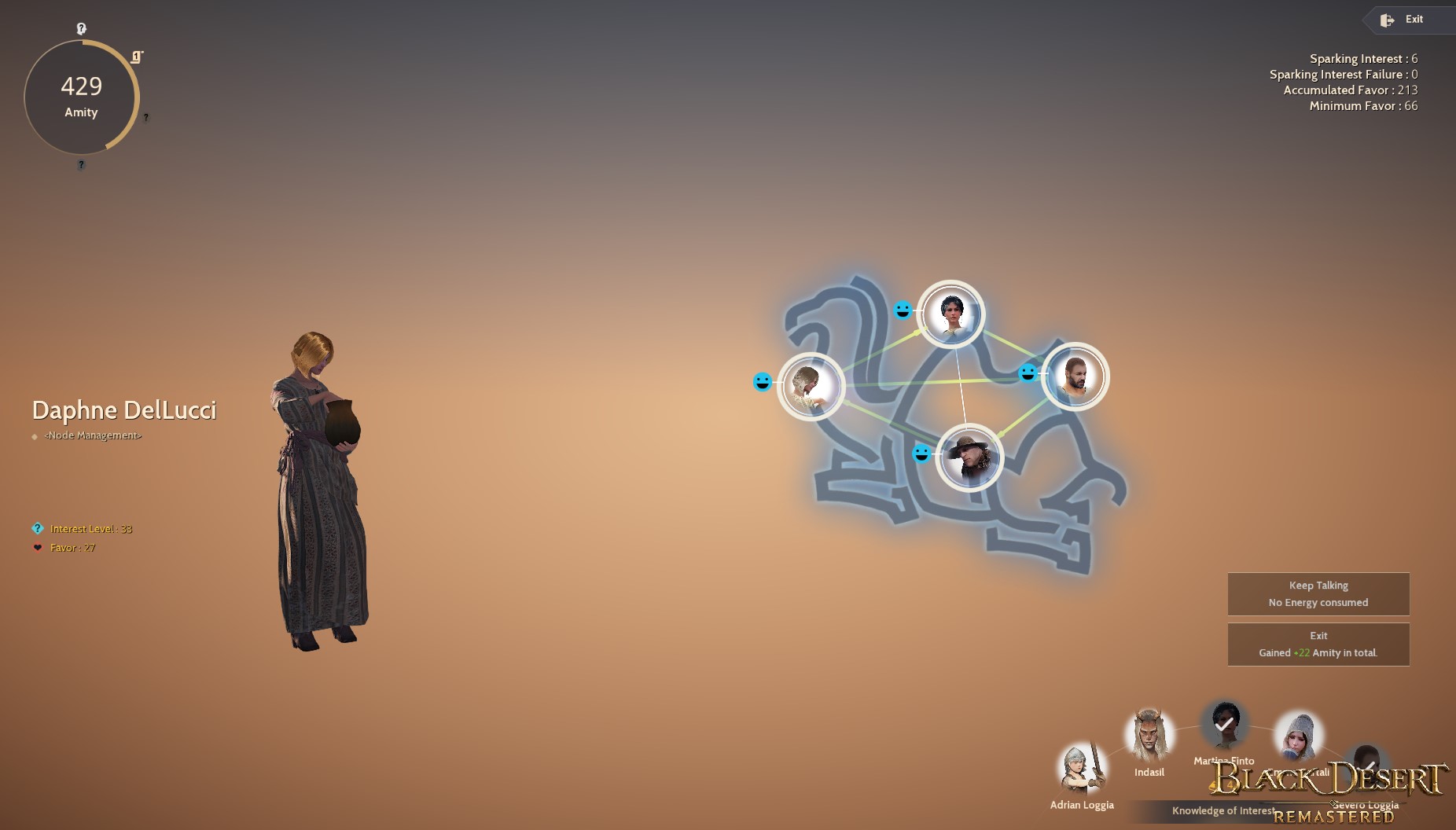 1. Daphne likes to talk about herself. lol
2. Selecting the knowledge with higher interest than the NPC ensures that you spark Interest.
3. The higher the interest, the lower the favor range.
4. The bigger the difference between NPCs Favor and Knowlegde Favor, the more Accumulated favor earned. But only earned if Sparking Interest is successful.
5. If you meet the Requirements based on the Results (upper right hand corner), you will gain higher Amity VS not meeting it or partially meeting it which reults to 0 or some Amity, respectively.

And after spamming this formula, I got to 500+ Amity and can finally get the knowldge from Daphne. 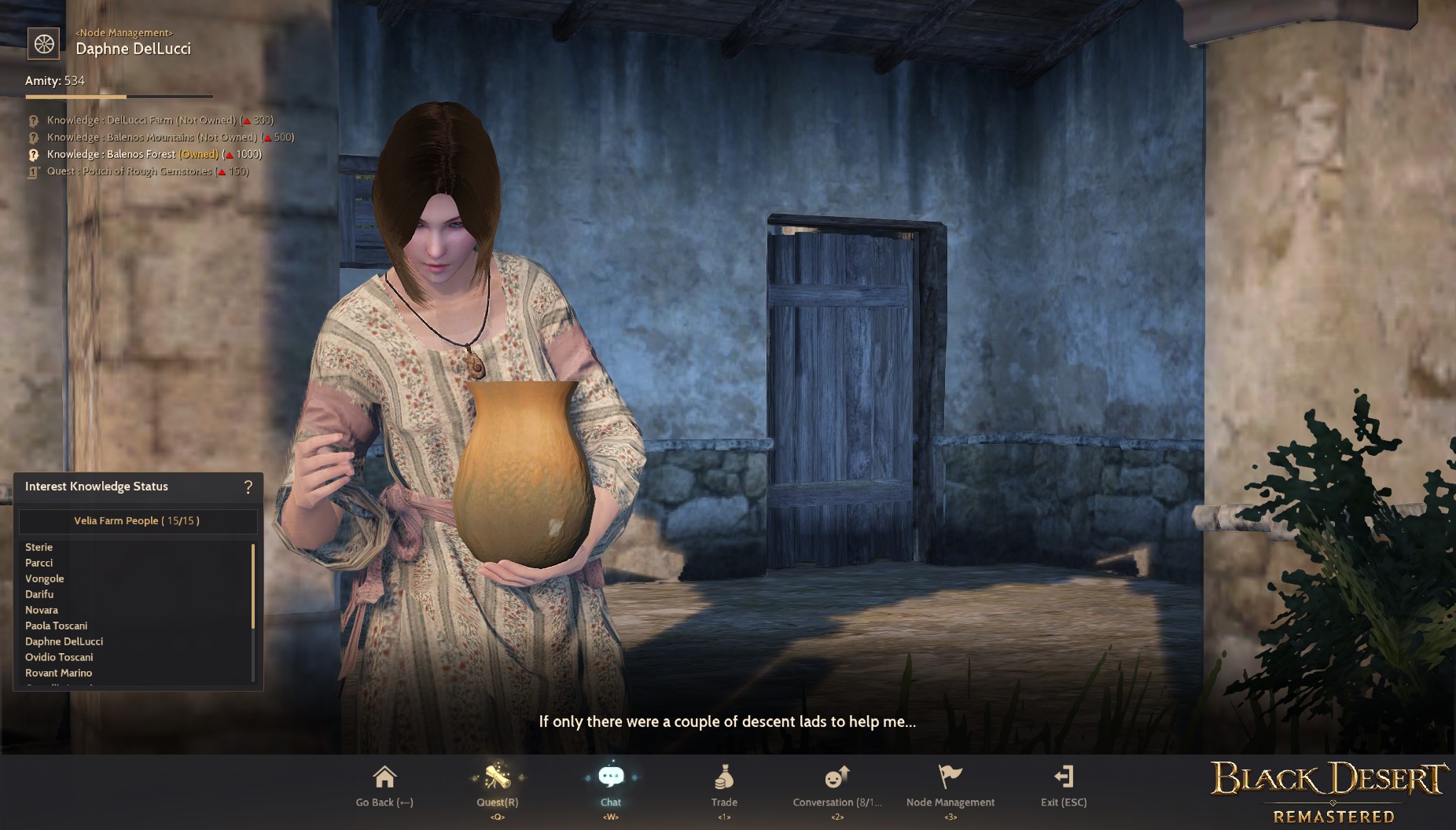 NOTE: You can use Improved Elixir of Amity to gain +30% Amity for 8 mins. Also, Crafted Costumes give +15% and Pearl Shop Outfitrs give +10% Amity. 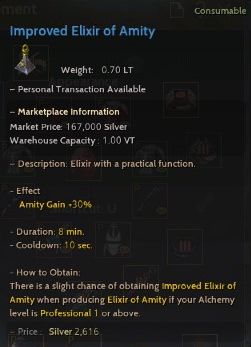 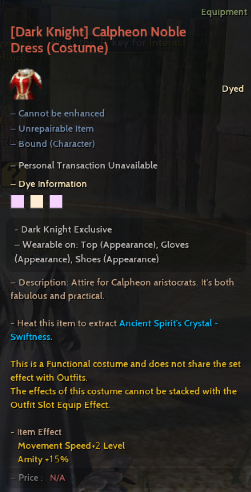 I'd like to make this thread a trial and error reference. Each time I will do an Amity Game, I will post the requirements and results below to compare, and have data for future use. Comment below with your own Amity Game experience or any additions and corrections you may have. Thank you all!

DISCLAIMER: I am not an expert on the Amity game, however I've done it several times and would like to share my expereince on how to raise Amity with NPCs to gain knowledge. I also tried to follow this Amity Guide by Dulfy in the past,  but anything with too much Mathematics is making my head hurt, hence my decision to just do a trial and error (see examples above). 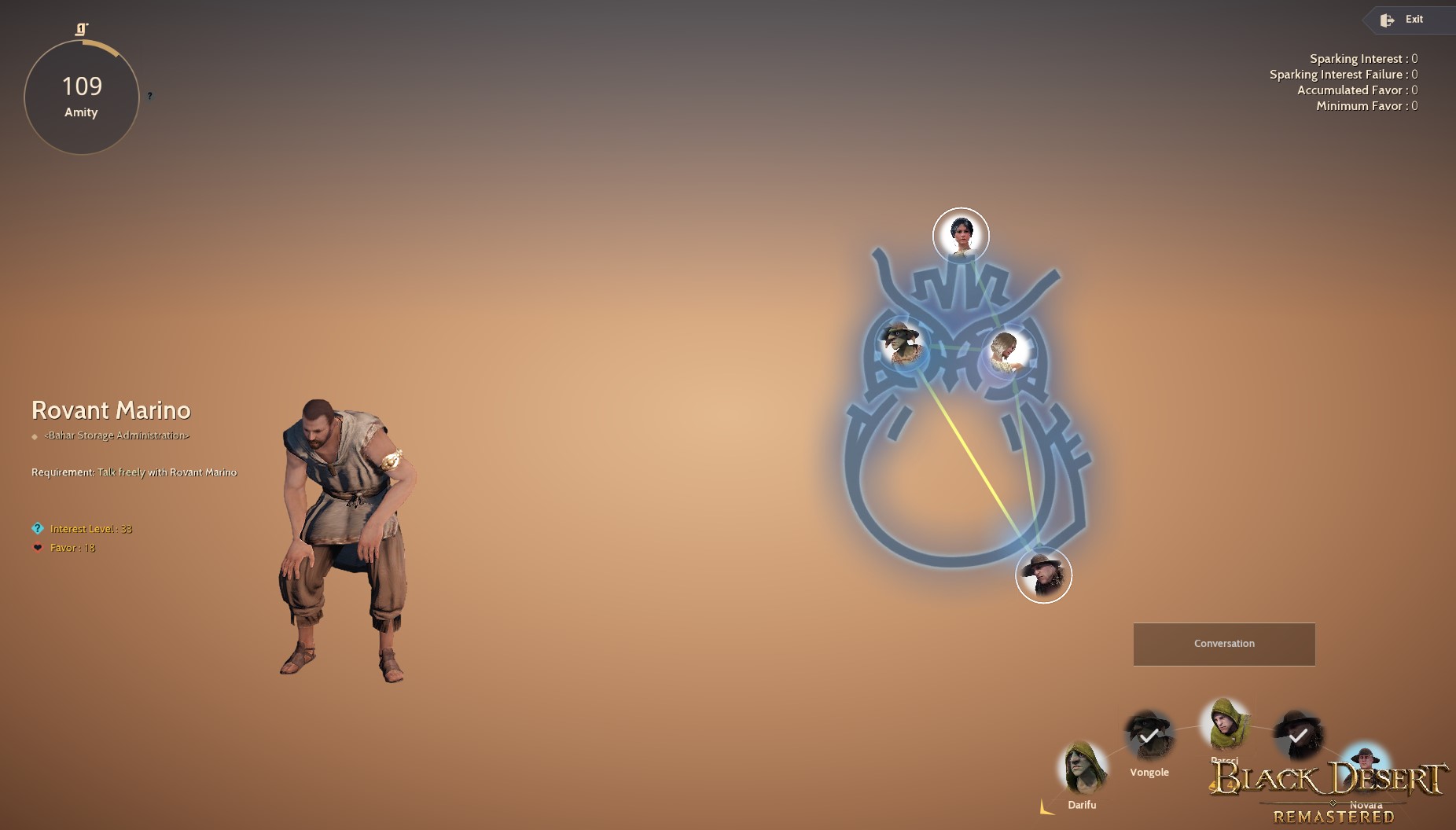 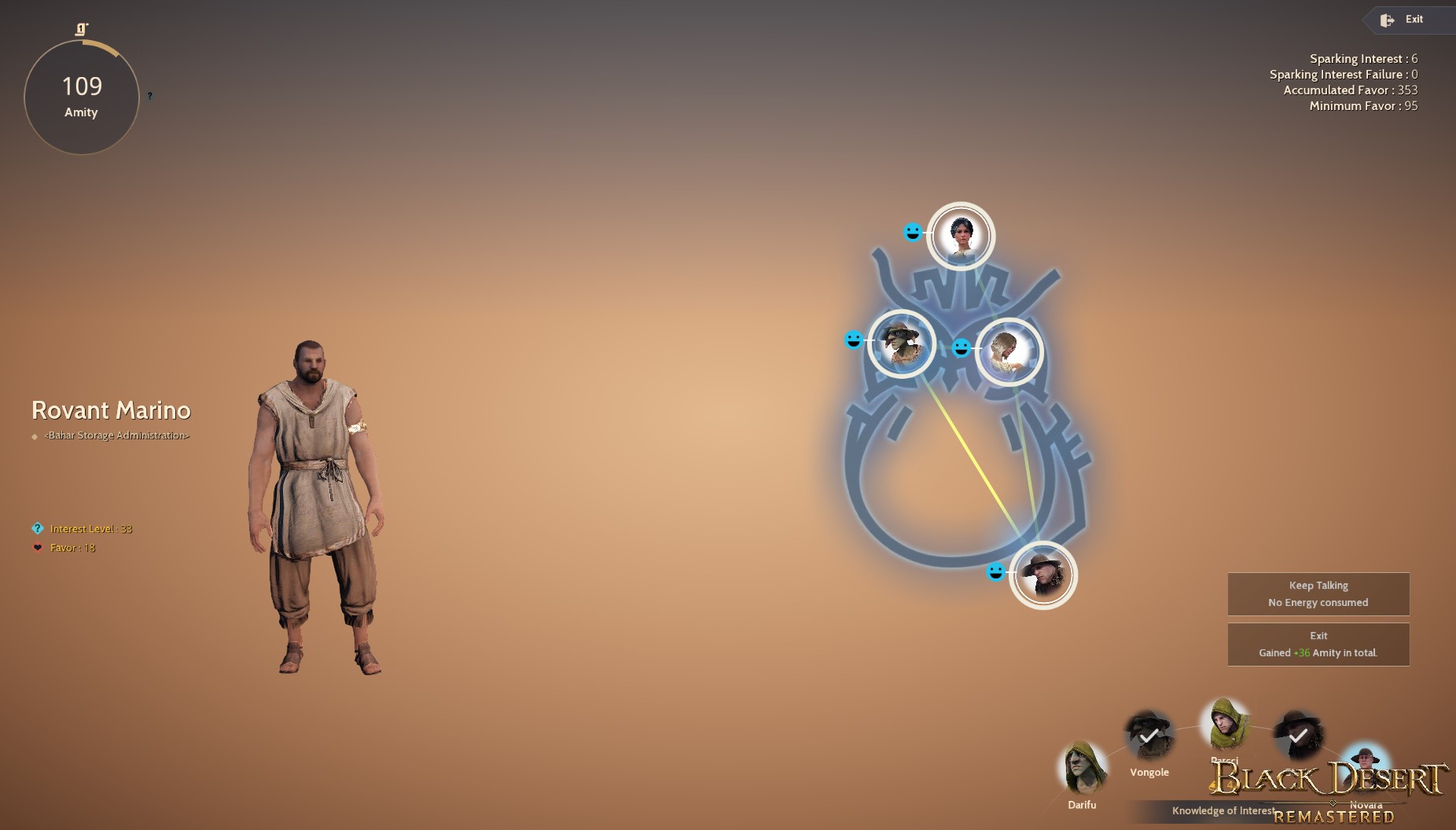 Observation: When base favor of NPC is low (18 in this case), the difference with the Knowledge NPC Favor is greater, getting more Accumulated Favor = More Amity. Also, note that the Knowledge Favor for the 15/15 Velia Farm people is the same for everyone in this area regardless of the target NPC.

You can also use Five-grain Chicken Porridge For +5% Amity !

Thank for this feedback Cute! I'm going back to Calpheon to cook some.

Nice Guide. I also use Thick FIve -Grain Chiken Porridge for 5% amity buff along with tailored costume and elixir. 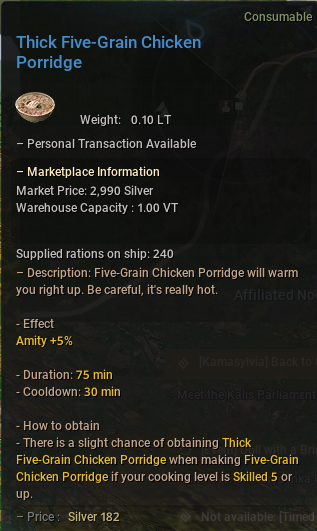 Thank you Frankie! I cooked up some Five grain earlier today and got a few Thick versions.

thank you for the guide.

I don't know how much it will affect, but investing energy in a town will make it easier for you to have conversations with the people of that town, probably something to consider as well if you constantly require amity from an npc for some reason.

@Velsath, could you clarify what you mean by investing energy in a town? Also, I'm only doing the amity game to get knowledge. When I started I have 320 energy, now I have 378. Thanks for your input.