Since the class rebalance changes I wanted to post my Siege/NW pvp wizard addons and the thought process behind picking each addon. 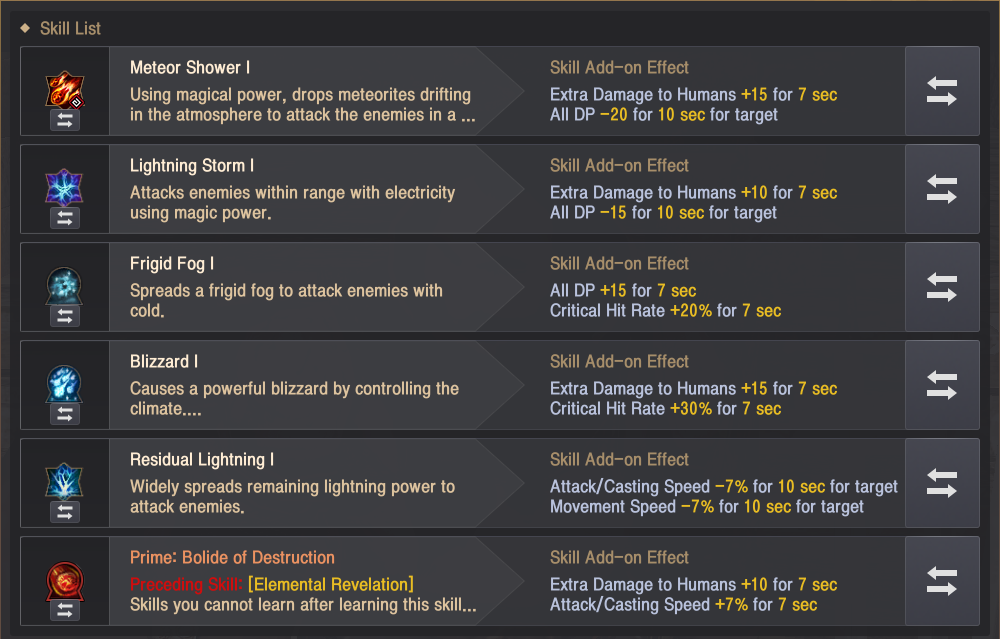 Lets start with the basics of how I setup my addons.

1. I all of my addons are on protected skills.

2. Depending on the skill and its cooldown and how its rotated during combat addons are adjusted.

A) Prime: Bolide of Destruction.

Bolide if fully Super Armor skill that lingers. It has low cd (6 second). It has very smooth animation and long range making it easier to proc the addons by hitting people.

Therefore it carries the most important self buffs - Casting Speed and Human Damage.

This skill is your metronome, meaning its tbe base skill that you rotate your kit around. The addons last 7 sec while the skill cd is 6 seconds meaning that the addons have permanent uptime.

Even though Frigid Fog is only an FG, it has fast animation with an 8 second cooldown.

This skill lacks on critical rate.

As a result of the above I added Crit rate addons and then put in + 15 DP making this fully self buff skill for myself.

You can replace the DP addon with a debuff if you wanted too.

This skill is partial Super armor. Its slightly slow to cast since it has multiple hits but it also can hit multiple targets and different locations on the same cast.

Therefore for addons on this skill I decided to put - Castspeed and Movement speed addons. Making this my primary slow and debuff skill.

This skill has Forward Guard that you can hold to the extent of remaining stamina. It has high damage cause of its 100% crit rate and okay accuracy.

This skill is often used as finisher on damage combos/ low hp enemies and alternatively used to trade into enemy FG/SA.

Therefore I repeat Human Damage addon and the put - DP addon to make it a better overall trade skill.

Since the recent rework on blizzard this version has become meele ranged with a FG. This skill has huge damage numbers and hits.

It is low on critical rate.

As a  result to I put Critical Rate addon on this skill and t3 + 15 Human damage addon in order to make it do maximum damage.

I swap between Focus and Areal Meteor during fights depending on the situation.

But since the primary job of Areal Meteor is mass CC vs Focus being used as finisher, my addons are based on Focus.

Focus has 100% crit rate and high damage potential so I just add more damage to the skill by choosing -DP and + Human Damage.

These are just how I like to setup my addons, following similar chain of thoughts you guys can make your own addon setup. I would suggest that let the bolide addons be exactly same and rotate everything else around your playstyle.