#Others #Event #Tip #Knowledge
Atoraxxion: Yolunakea Guides
Nov 19, 2022, 01:40 (UTC+8)
284 1 2 0
Last Edit : Nov 26, 2022, 18:07 (UTC+8)
# 1
Hello guys, I have been doing Atoraxxion and fell in love with the content on first sight. Understanding the mechanism took me and my friends a long time and here I am sharing the guides, and tips and tricks that I found at Yolunakea . I would say this is a good co-op content that you can do with your friends or guildmates, the rewards also quite nice so I really recommend you guys do it at least once to get the rewards or can start new activity for friends and guild. I will keep updating the guides as detailed as I can get, this article is not completed yet, will keep updating if i found something new or can let me know here.

No mechanic found so far, Just DPS (related to puzzle) 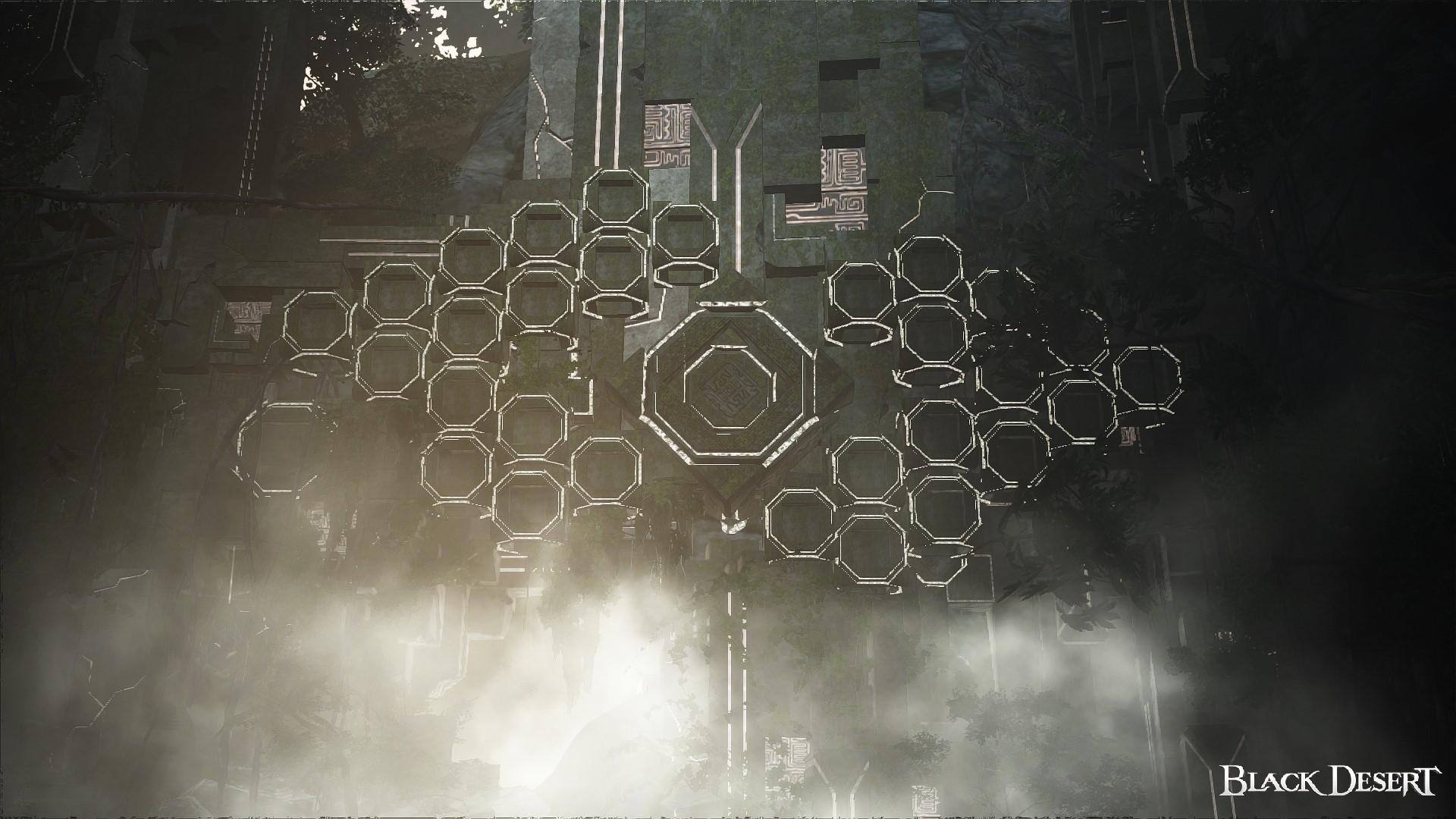 Mechanic explained:
There are 4 corners will have yellow circle around it, then you see the big Billboard, behind the puzzle (picture will be added soon).
The Big Billboard will tell you how many people need to step on the yellow circle on each corner to open the circle. Once it disappears, kill the mob inside it.
Boss can’t be damaged on mechanic phase.

Exchange Vaha Elite's Scroll to each corner (follow the mini elites, talk to the cube on the corner to exchange it)

Tip : Off your pet to loot the Vaha Elite item manually so you can pick what elite you want to use later. Anyone knows the Cetus mechanic for 2nd mini boss (Sebekaruk) take Cetus.

Note: item is not randomly dropped, kinda fixed. (ex: once you got krahtenn, you will keep getting krahtenn)

PA ady fix the bug about its HP, now can Kill it fast if u manage to do the mechanic correctly.

Mechanic explained:
Cetus need to do Mechanic, jumping from a certain platform to green beam to cancel the healing mechanic. Platform on the right side, on a stone, need to climb to go there (will update the pic later)

i don't remember the next mecha will update soon.
Still need to learn more tips and tricks about this boss 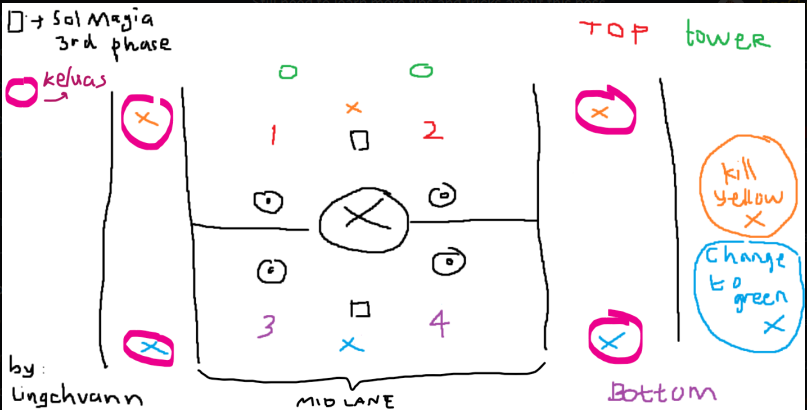 notes: Yellow and Blue towers position might be switched

A circle will spawn on LEFT LANE, MID LANE, and RIGHT LANE and move vertically.
If you step on it, it will stop moving and give u damage over and over again (quite pain for me 373DP sorc). It will spawn randomly during the two phases, pay attention and always try to AVOID THE CIRCLES!
MED KIT IS USABLE ON THIS BOSS ROOM

Pay attention to the announcement!

1. Vendum/Baby golem
KILL ASAP. It will appear at number 1, 2, 3, 4 (see map for reference) up to 5 or 6 times spawns, will be announced every time it spawns. Do not let this touch the Amarillo (like fish phase in syca)
Baby Golem will spawn green orbs once it died.
Killing Vendum will heal you

2. Keluas/Color Phase
It will spawn at the pink circles (see map for reference). Every Keluas will glow either Red/Orange, Yellow, Green, Blue. There will be 4 orbs coming right into the glowing Keluas. Get the same colored orb by blocking it with your body. If you let it touch the Keluas, it will give u Pain AOE.

The attack can wipe u, will deplete FG armor, SA doesn't work, or Iframe is tricky. it has a small AOE so u can stay far away if u fail to catch the orbs

(E.G. If your Keluas is green, do not allow the green orb touch the Keluas, others doesn't matter)

Try to kill it before it activates, failing to kill it will reset its hp

Tip: If you fail to kill the Keluas, bring it to the middle to kill it together with your party.
Pay attention! Vendum will spawn again

The 2 towers/twin towers will be activated (see map, it is highlighted with green circles).
The tower will have green orbs spinning on top of it. Count how many orbs are there, remember the numbers on each towers

Vrekahim will spawn on TOP near the twin towers. DPS until Vrekahim die.

In mid of killing vrekahim, vendum will spawn need to kill before they reach the boss.

How to use the green orbs from Vendumsto kill Vrekahim:

Vrekahim will give u big green orb once it died, get the buff by touching it (please check ur buff indicators, should have a green buff like in syca color phase).

Transfer the buff to the towers, 1 player 1 orbs transfered. 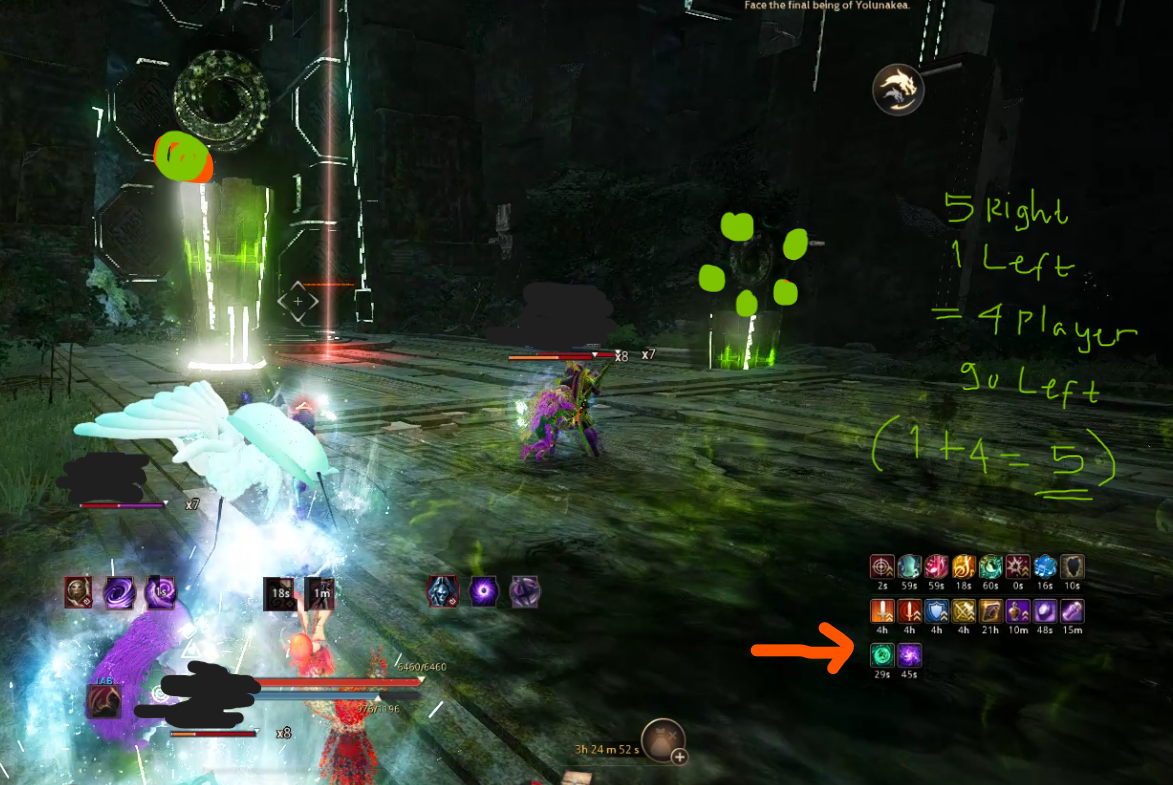 If u manage to do this u go to 2nd phase, It starts with a cutscene and will spawn 2 rona bastards called Tuntaros

DON'T TRY TO OVERLAP IT

Tuntaros' charge attack, avoid this no matter what. Gonna give u perma poison or burn (no indicators)
Blue Tuntaros Mechanic:  destroy the shield
if you fail this, the blue tuntaros will get healed *(as far as i know)
Yellow Tuntaros Mechanic:  the one who is very tanky or have PA, need to absorb or stay close to get the stun. (Do not Tank this In ELVIA) the rest can hide.
if you fail this, the yellow tuntaros will get buffed (another icon appears)

Note: I don't have enuf proof that both tuntaros need to have same HP but to be save just balance it and keep informing each other to help DPS, but you cannot kill it no matter what! killing it = fail mecha

If you manage to do it, there will be an announcement about calling Tuntaros to charge in the middle

Once the Tuntaros are charging to heal(?) those 4 white circles turns out to be a popping out from the ground laser (like in syca laser phase, marked with donut circles on map). Kill 4 of the lasers.

There will be 6 invisible towers spawning

Divide your party to be 2 and 3 people.

2 people will go to the Yellow tower and destroy the yellow invisible towers (Locations are a bit random but around that area, marked with yellow X, see map for reference)

If you manage to do the mechanic, Tuntaros will not be stunned again and you can start DPS again.

KILL TUNTAROS
Tuntaros will start moving again. Stay in the middle lane and KILL IT THERE

Tip: Need in the middle lane, in case if you die, your teammate can still revive you. If you die outside mid lane, there will be invisible wall blocking the access to left and right lane

Mechanic between the DPS:

1. Poisonous Pulses
There will be 4-5 cubes on top of the middle map, that will give poison pulses every 2-3s.
You will also be stunned and got damaged, its very painful.
between those cubes, there will be 1 tht is inactive
lure the boss to the inactive cube and DPS it there

Sol Magia will appear on the map on Top and Bottom (see map for reference)
Destroy red tower first, then the orange one (need further confirmation about this, better just to kill it together)

If you manage, there will be an announcement, about Amarillo asking for Vaha's help, continue DPS till dead

there will be a ball on top of the middle white platform (was below the sleeping amarillos, see map for reference, yellow circle marked with X)

Vendum will spawn on the bottom side, kill it. WHY? bcs killing Vendum will give HEAL

once you managed to do this, the boss buff will be gone for like 5-7s if im not wrong 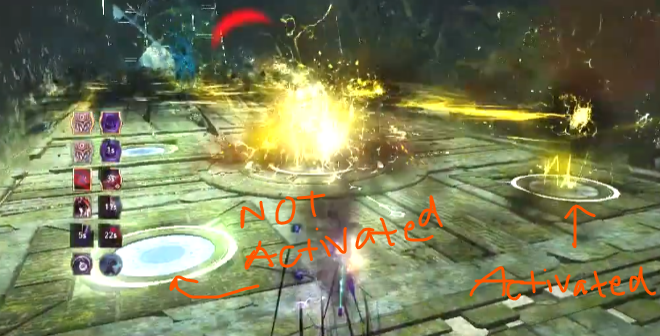