There are a variety of PvP contents in Black Desert. There is one content that all the adventurers and guilds enjoy. It’s the Node War!

Everyone can join, regardless of their guild size or equipment. They fight for victory as one big team.

In the game world, most of the areas are divided into nodes. In a Node war, you fight for the ownership of these lands. If your guild becomes the owner, your guild owns the node for a week. Also, you can collect a portion of the tax as guild fund and have economic growth.

In order to join a guild war, you need to build a fort. A fort will work as a command center of your guild. You need to protect your own and destroy your enemy’s fort.

Let me tell you about the things you need to prepare before the Node War.

1. We will send the Fort and the materials to finish building a Fort to all members of the clan through the mail on 11/26 (Sunday) 01:00.

3. When you leave a guild, you can’t join another guild for 24 hours. If you are preparing for Node War, please beware about this.

4. You can build a Fort until November 26(Sun), 07:00pm, and you need at least 10 guild members online to build it. Here are the Guild fort building instructions.

- The Guild master or guild officer will move to a desired area himself to install a fort.

- The guild members will put the materials they received via mail in their storage and send workers to finish building the fort.

- You will need 1 worker per material, and you need 4 workers in order to finish building the fort.

- You can install barricades after the fort has been successfully installed.

- You will need to go to your fort to build the barricades, and you do not need extra workers.

- In CBT version each guild can build up to maximum of 30 barricades.

- Only 1 barricade is sent to each person, so in order to install 30 barricades you will need 30 guild members.

5. After the Fort is completely built, the guild cannot accept new members.

6. In the CBT version, you cannot buy a Fort from the Guild Manager NPC. You can buy potions with the guild fund, and those potions can be used only in Node War areas.

If you’re ready for the Node War, let’s learn about how to start one! 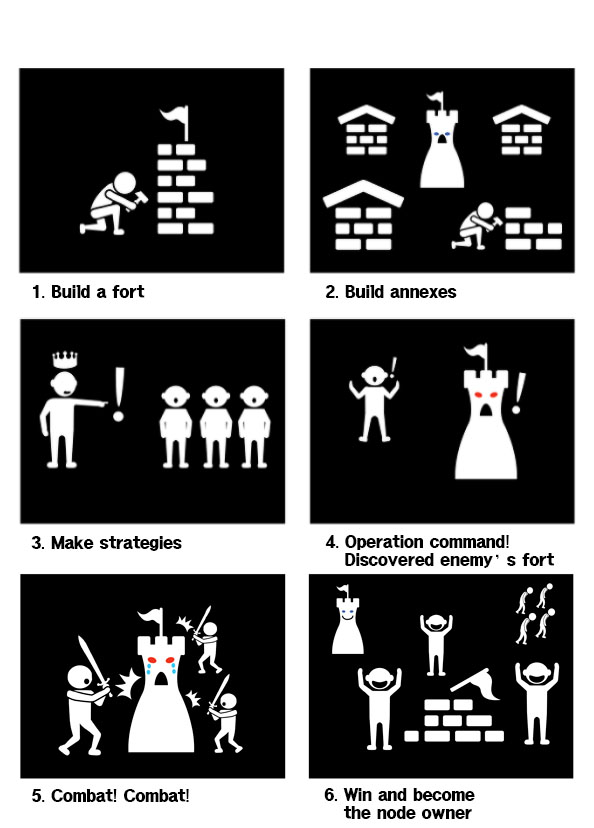 This guide will follow the steps shown above. If you know the 6 steps, you can join the Node War anytime and enjoy a combat.

In order to build a node, you need to understand the ‘days’ and the ‘levels’.

‘Level’ refers to the amount of tax that gets accumulated. All nodes are classified into level 1~3, and level 3 nodes accumulates most amount of tax. Choose one depending on your guild size and how your team works. 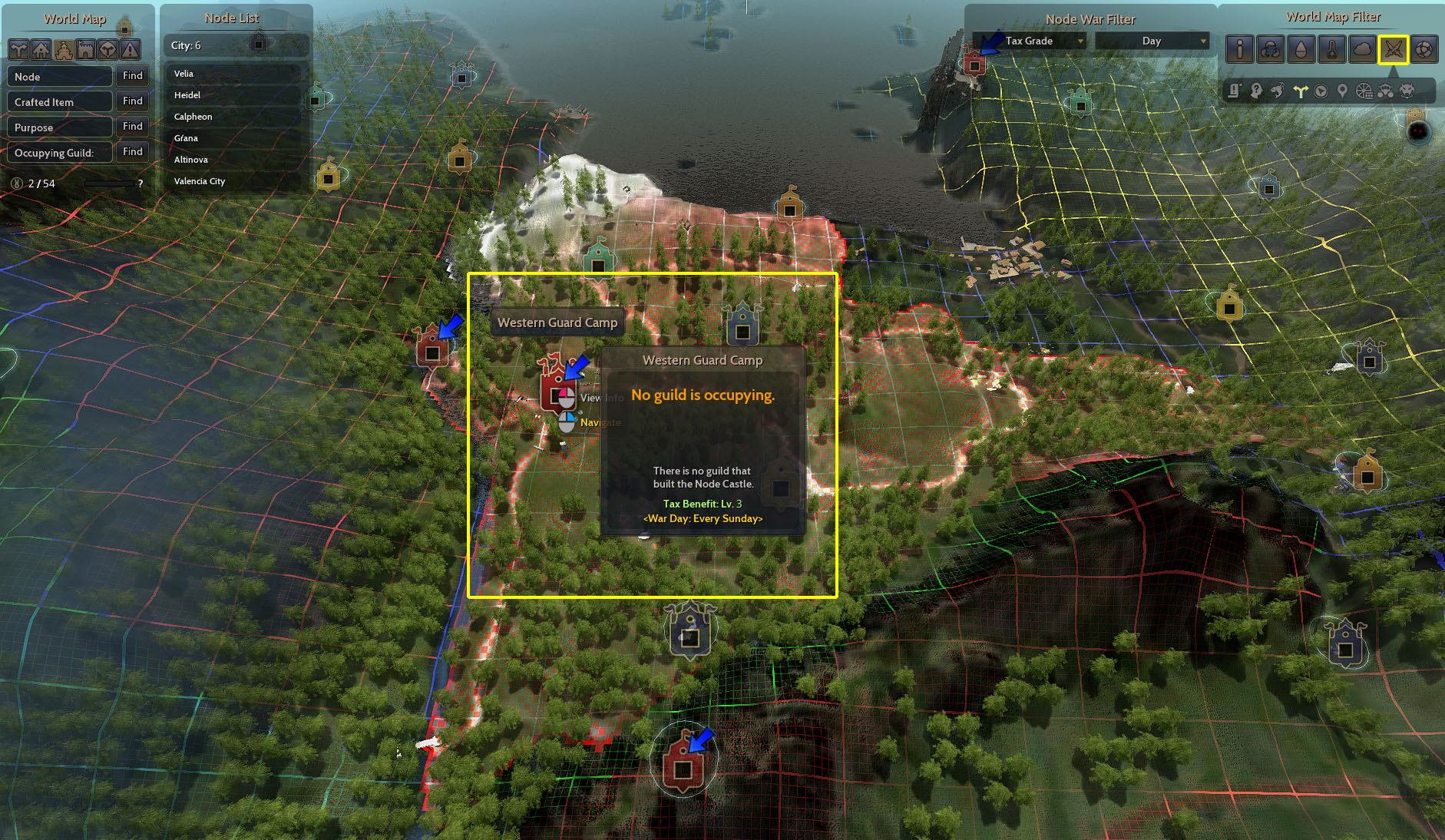 ▲ If you select the Node War information filter located at the top right corner of the World map, the world map changes. You can search the days and the levels. If you click each node here, you can check the details as well. 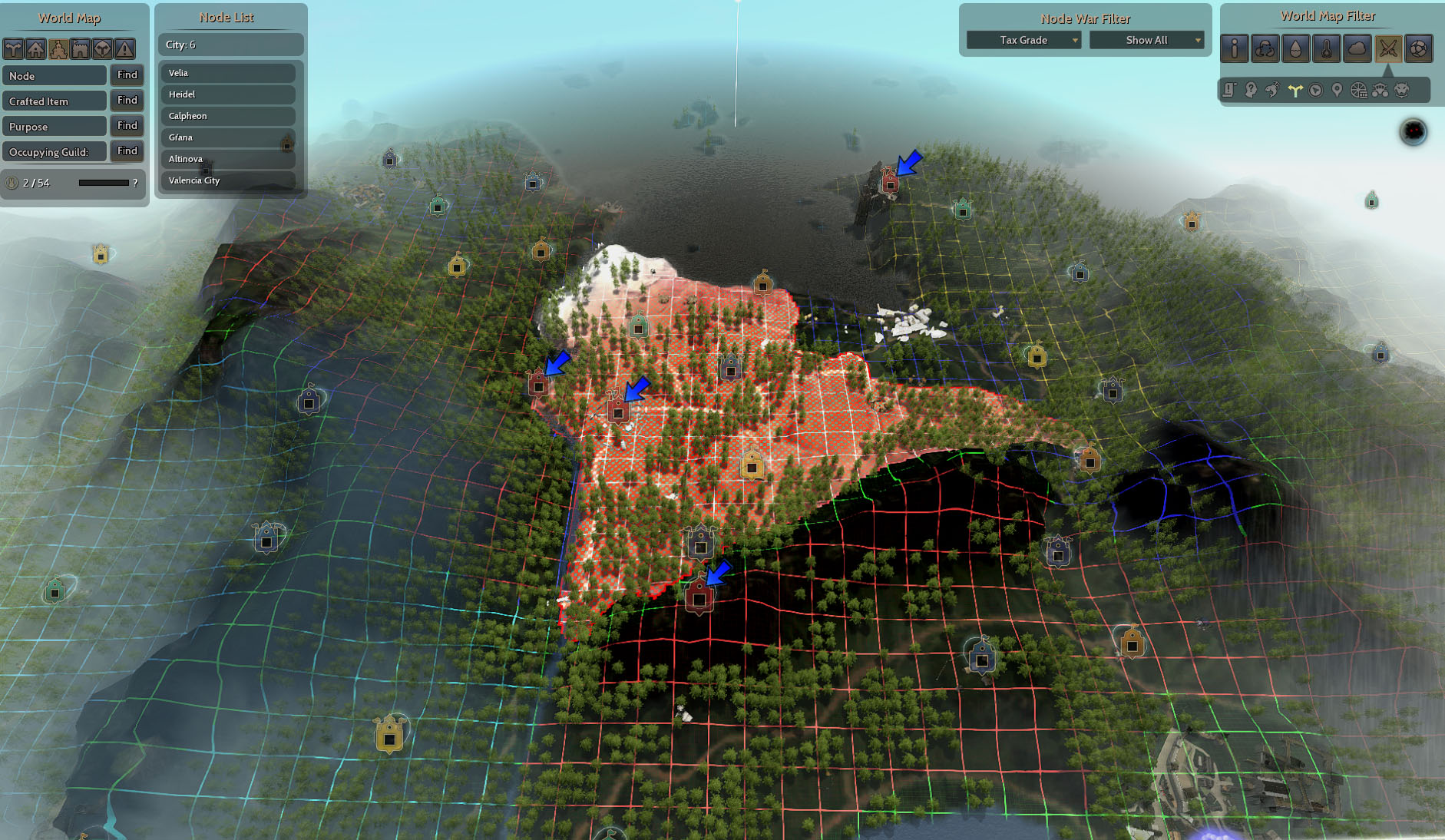 ▲ Eastern Velia(Combat) area. The Node Wars in this area will be held here.

Let’s look at the details.

You can purchase forts for the Node Wars from the Guild Manager NPC. The forts act as a command center in a node war, and if it gets destroyed, you will lose the war. So you need to build a strong fort and protect it, while destroying the enemy’s fort.

The fort can be purchased with ‘Guild fund’, and only guild master and guild officer can build it.

If you go to the location you want to build it in and right click the item from the inventory, it changed to installation mode. If you click confirm after selecting the area you want, a fort will be built. 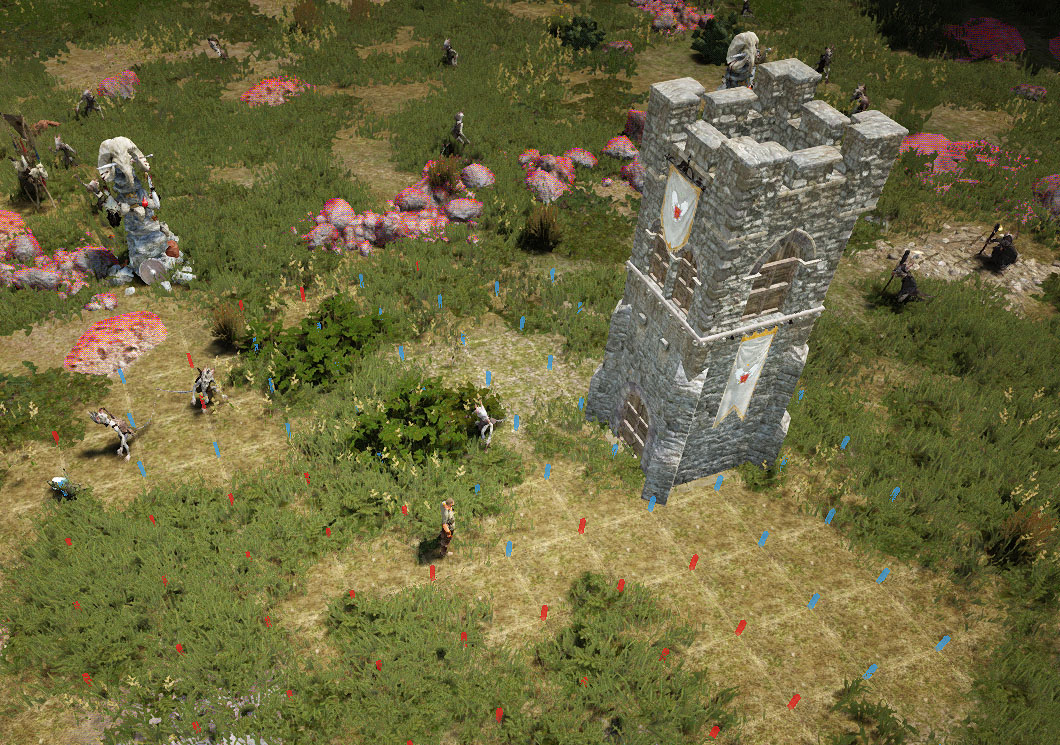 ▲ If there are other forts nearby(although not visible), or your fort doesn’t fit the landscape it doesn’t get installed. You should build a fort in an area that is easy to defense.

If the guild master and officer registers a fort, it’s ready to be built.

Now it’s time for all the guild members to work together. When you look at the world map, the registered guild’s fort icons show up. When you click it, a window that allows you to send workers to that area will pop up. The guild members should all get together to gather the materials and send workers to finish building (It’s more efficient to work 1 shift at a time rather than setting them on repeat).

All the fort needs to be 100% built by 8pm (If it’s not completely built, your guild gets excluded). When your guild finishes building, you can enjoy Node War from 9pm to 11pm. 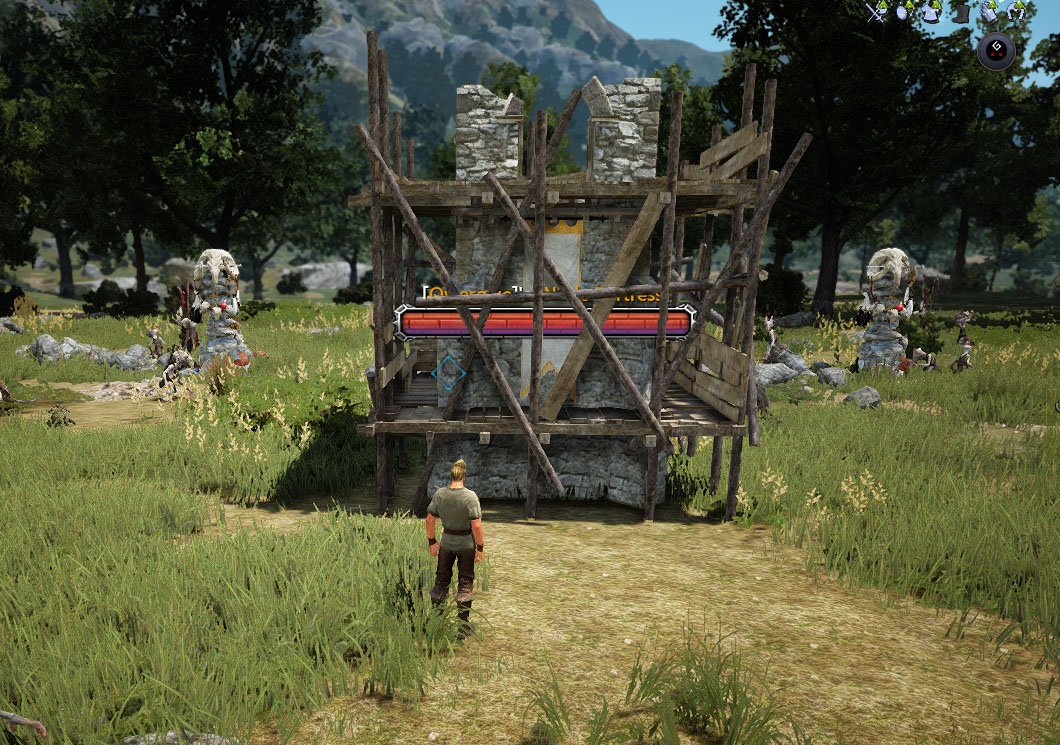 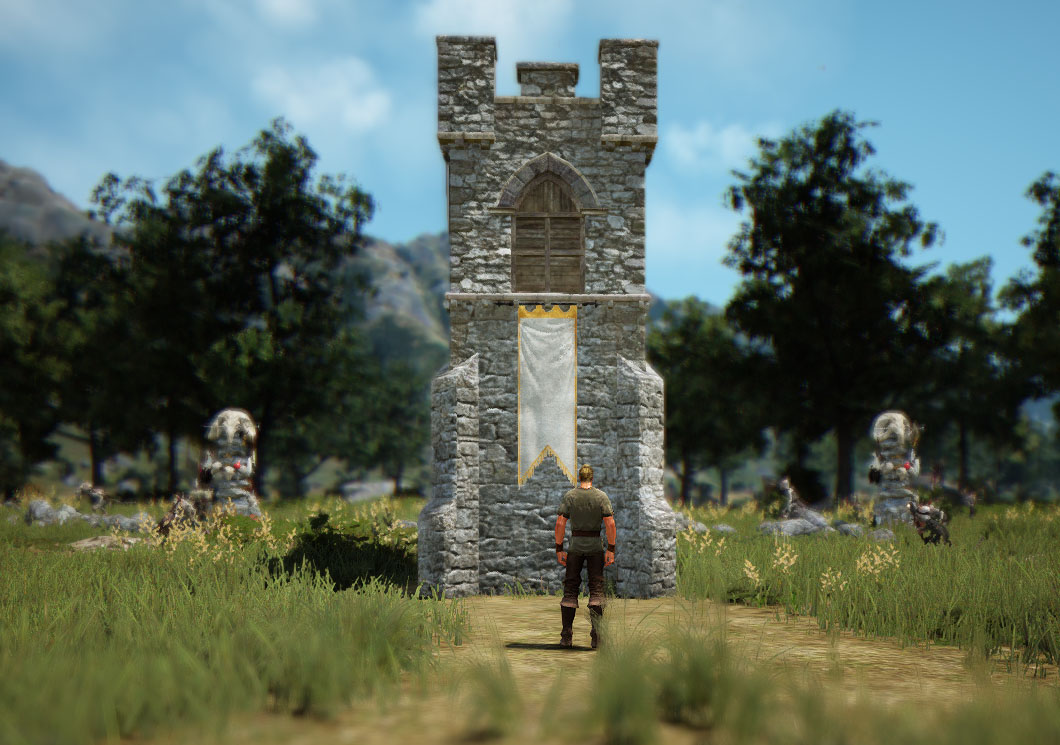 ▲ When you finish building a fort, you’re finally qualified to join a Node War!

Annexes are buildings that can be installed around the fort when the forts are completely build. They are categorized into ‘installation types/consumable types’. During the test period, only barricades will be available. You can also purchase a barricade from the NPC. 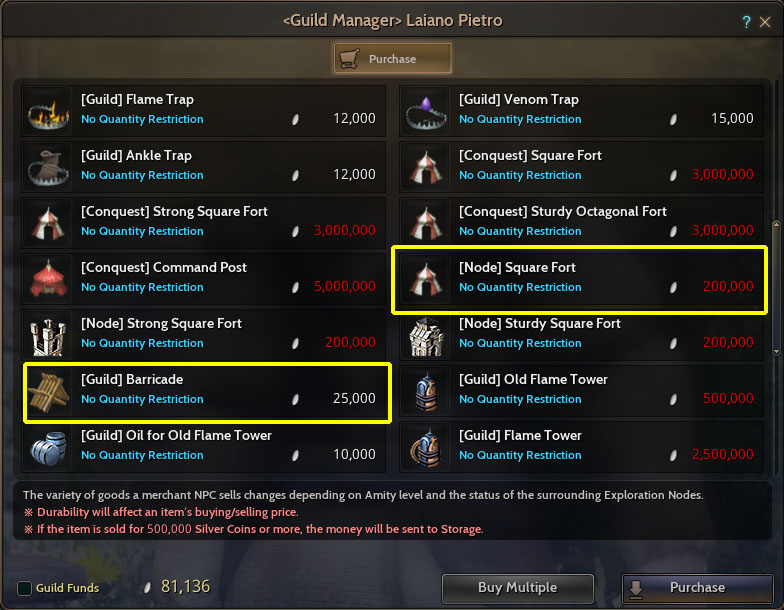 ▲ You can buy items related annexes such as forts from the guild manager NPC. Guild master/ guild officer/quartermaster can purchase different items depending on their level (With guild fund).

Barricades are built around the fort to protect it from the enemies. The barricade takes 1 slot from the maximum allowance for annexes, and you can build up to 50 barricades. You can block your own troop if you build too many barricades, so plan it out before you build them.

(If you die during a Node War, you can ‘revive at fort’. If you use this function, the guild members will revive right in front of the fort. So it’s crucial that you make a room for your troops to exit and move freely). 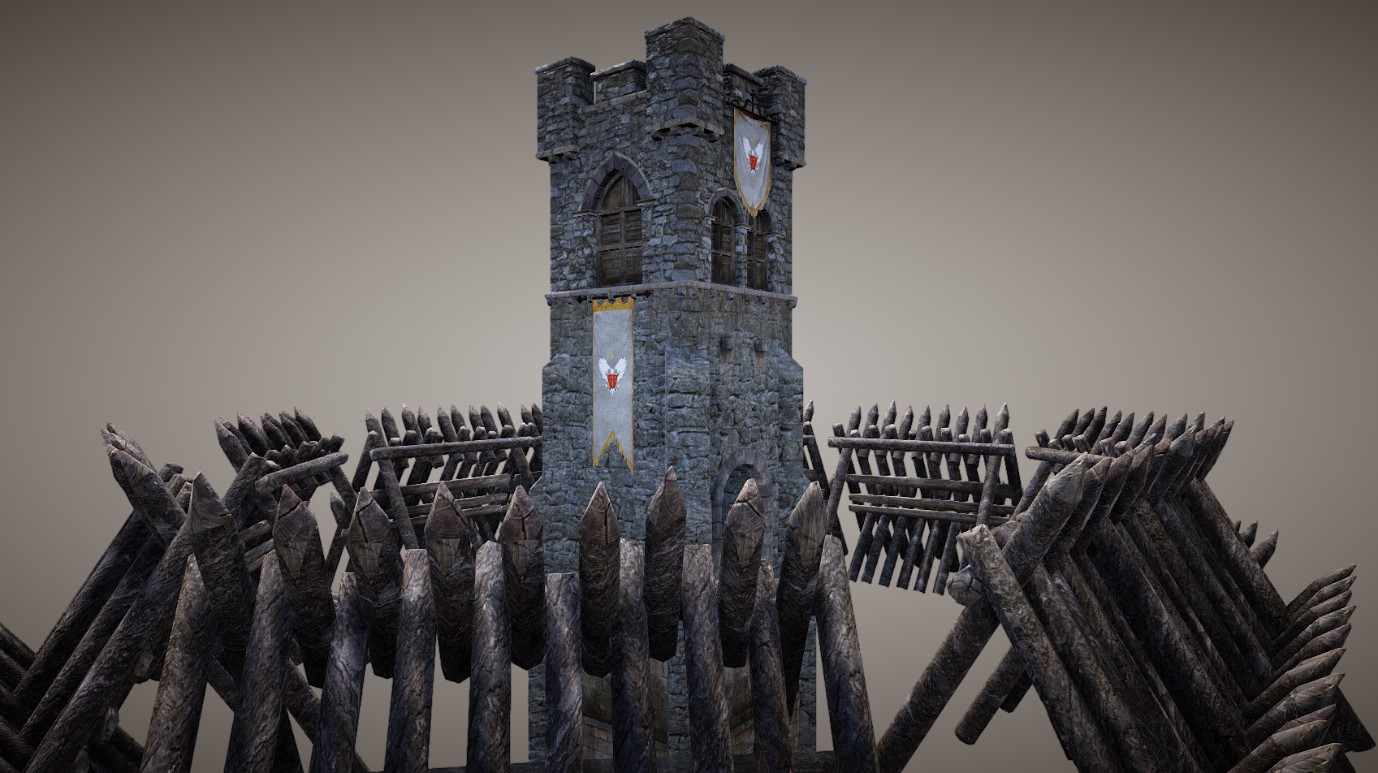 ▲ If you build a strong barricade, you can protect your fort. But don’t forget to build a passage since the guild members revive right in front of the fort.

If you are done with step 1 and 2, you’re about 90% done. All you have to do is work together with your guild members and have a successful combat.

You need to know how many guilds joined this Node War, and also figure out a way to find the enemy’s guild faster. You should also think about how you want to work on your offense and defense.

So if you get on a horse at the beginning of the Node War and discover their location, you’ll have a better chance at winning.

▲Your guild is displayed in blue, and the enemy’s guild is in red. You can’t see it at first, but when your guild members find it and attacks it, it appears on the world map.

The offense and defense strategy depends on the guild master or the combat leader. You can start fiercely attacking as soon as the war starts, or you guild can work on the defense together and watch other guilds getting destroyed. It’s all your choice!

In the Node War area, opponents are all considered as enemies. But since there are no advantages during a Node War, just enjoy the battle. Node Wars are less like wars, more like sports!

※ If there are more than 2 forts at 10pm (the time limit), that node will become liberated.

6. [Win and become the node owner]

The Node War will start on November 26th, Sunday, 8pm. To recap, select ‘Sunday’ node in the ‘Balenos’ territory. If your guild wants to join, look at the level of each node and build a fort in the area your guild likes. Don’t forget that it has to be completely build by 7am!

How about shouting your guild name at the end of the test?