Here are the updates made to Black Desert on August 4, 2021. 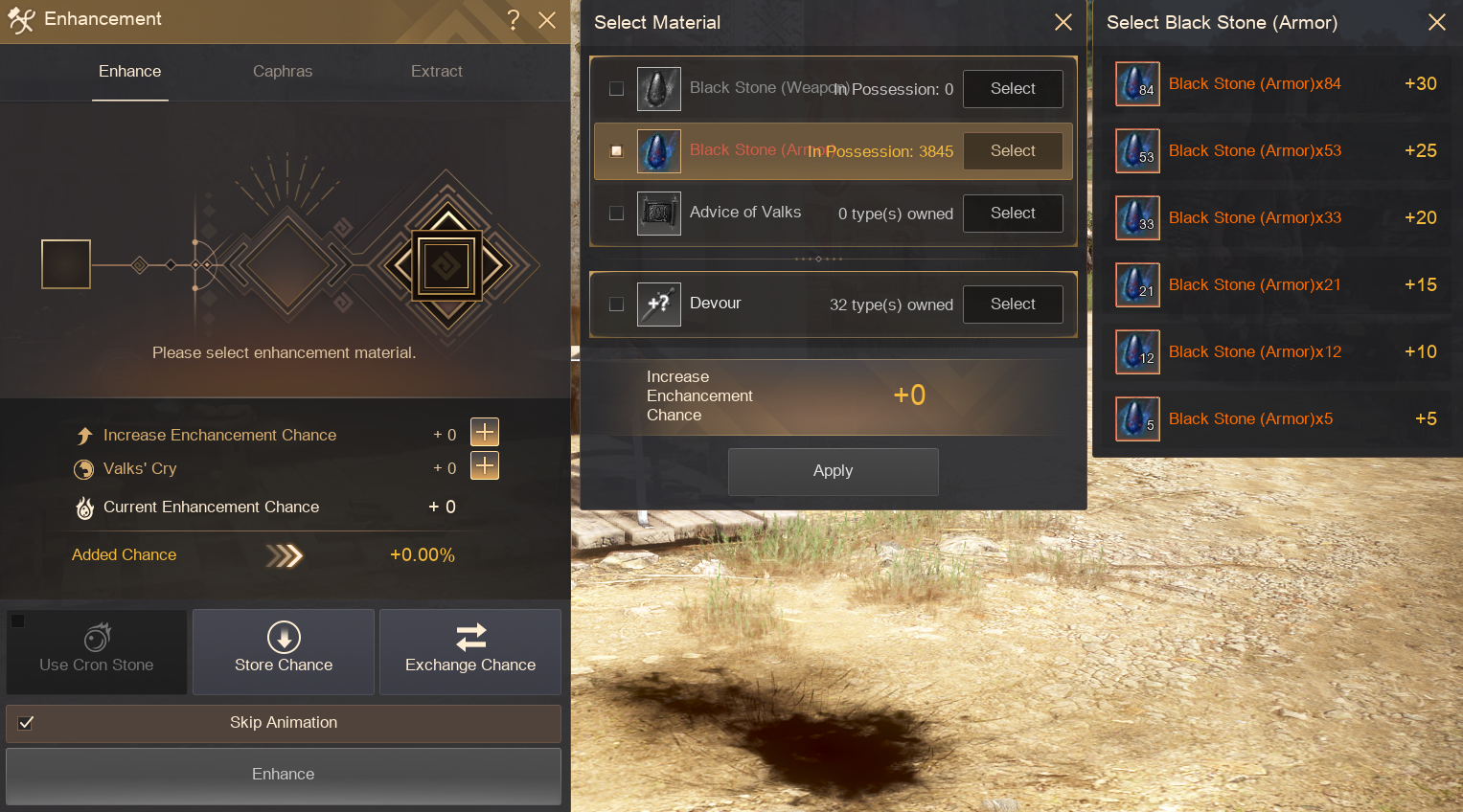 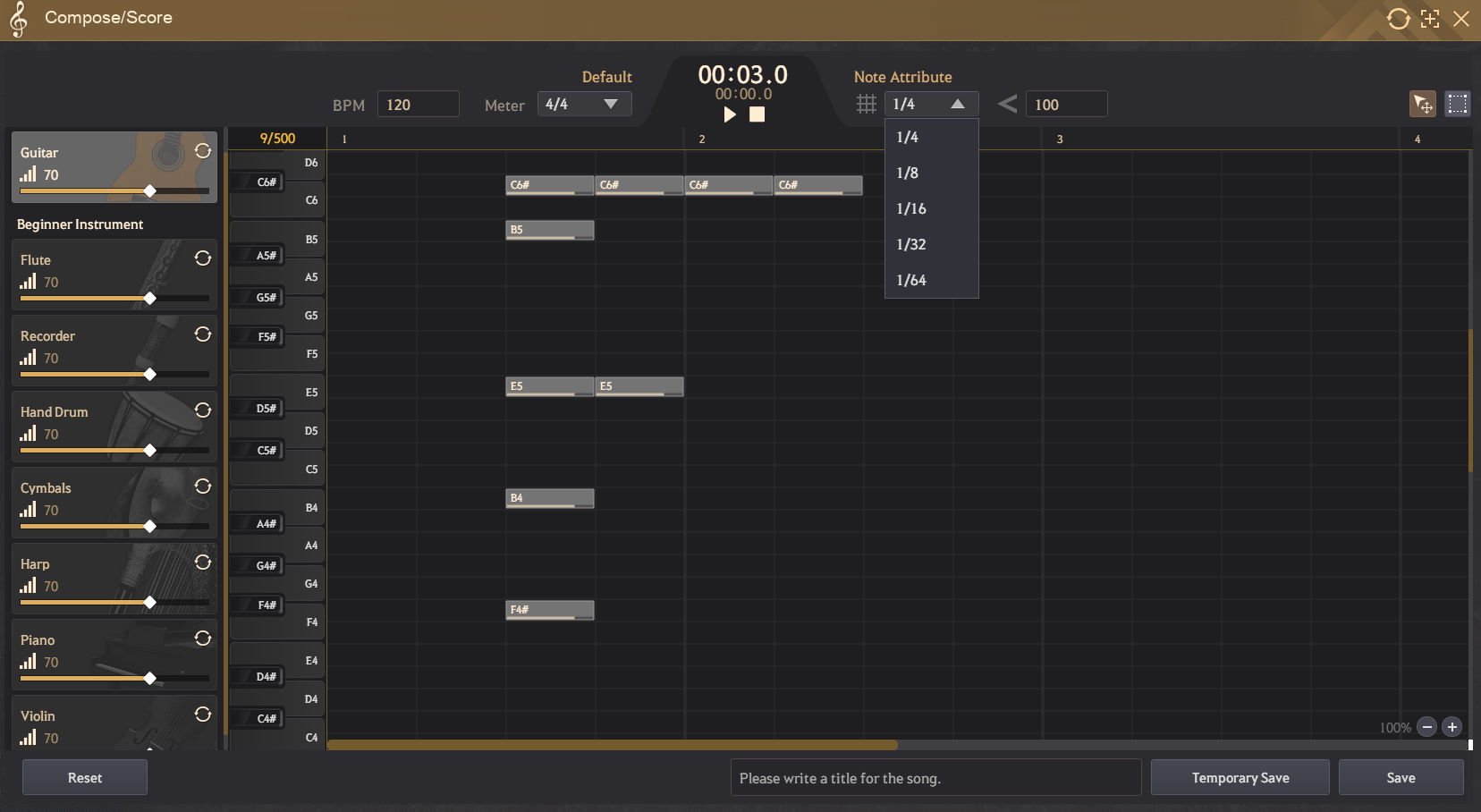 Last week, we fixed the issue where maximizing the size or changing the BPM of a composition would realign the notes. With this fix, however, it's become difficult to compose more rhythmically complex beats. Now with the addition of 32nd and 64th notes, along with the addition of a 200% zoom function, you'll be able to arrange your compositions in meticulous detail. We're also preparing to allow for BPMs up to 200, along with several other bits of feedback that our musically inclined Adventurers have provided us. We'll continue to examine and deliberate over your suggestions and do our best to continue delivering these improvements in a prompt fashion.
● Separated the controls and rest keys of the campsite.
- Controls (R), Rest (F5) 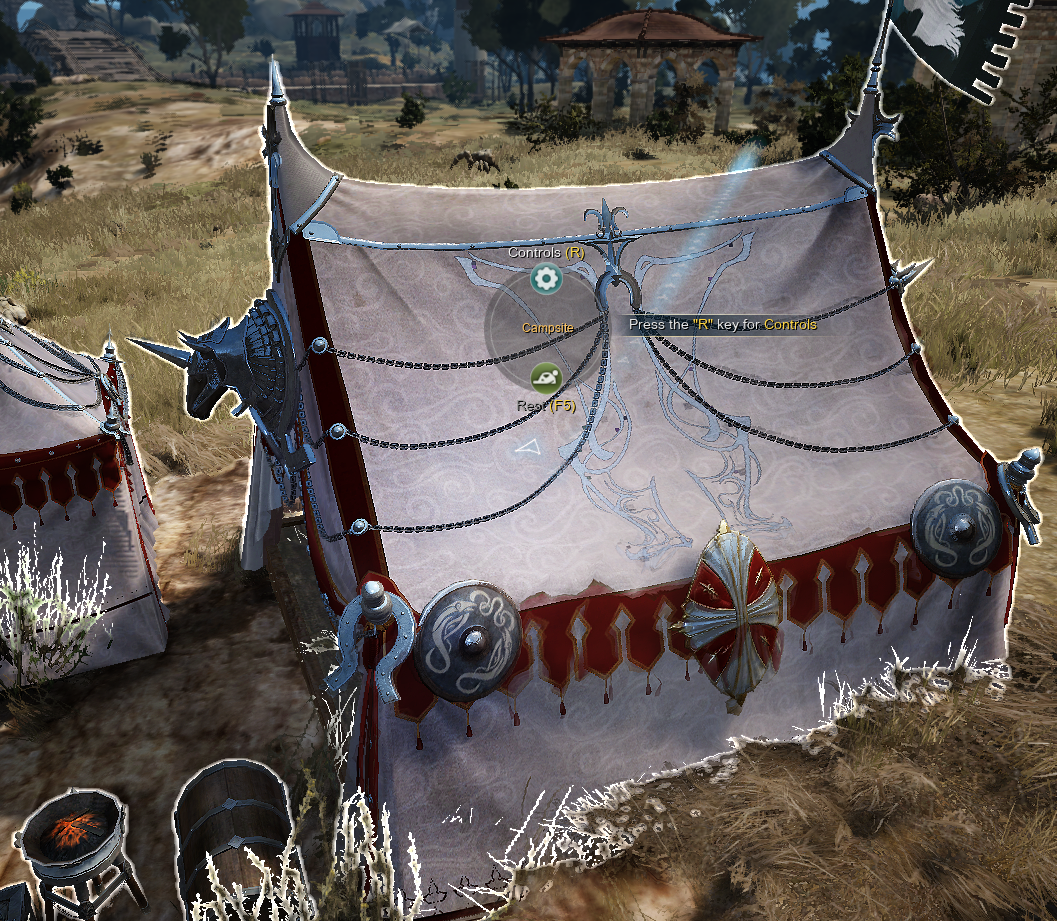 ● Fixed the issue where certain classes could immediately recover with a certain movement after being dismounted.
● Added color effects to detailed numbers for skill add-ons.
● Changed "PvP AP" effect to "Extra AP Against Humans" for skill add-ons.
- Since the actual effect applied to all human types, we changed the name to match.
● Improved the movements after stopping in combat stance for the following classes:
- [Archer, Guardian, Hashashin, Nova, Sage, Corsair]
We've simplified the basic movements for Archers, Guardians, Hashashins, Novas, Sages, and Corsairs in combat stance. We're currently in the middle of making improvements to their non-combat stances as well, and we will update them as soon as they’re done.
● Fixed the issue where season characters could mount Dream Horses.

● Improved the description for boxes that mention obtaining items according to a set probability.
● Changed the icon for the [Event] Rare Tungrad Accessory Box. 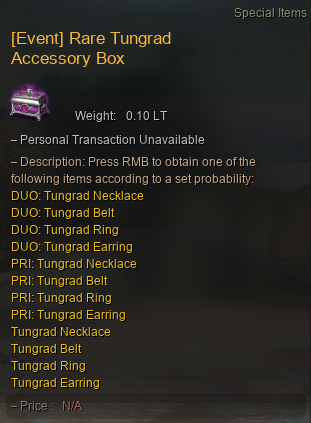 ● Fixed the issue where cutscenes (intro visual, Kzarka cutscenes) would sometimes stop playing prematurely.
● Fixed the abnormal background of the Blue Maned Lion's Manor's vicinity in the World Map (M) window.
● Changed the background music for Hystria Ruins and Aakman Temple.
As Hystria Ruins and Aakman Temple are both located in the desert regions of Valencia, we composed their new background tracks with traditional instruments of the Middle East. We also added string instruments to add a dramatic element for Adventurers who may suddenly find themselves in combat situations in these zones.
● Fixed the priests sent to the town blacksmith for gear cleansing to offer the relevant dialog options.
● Changed certain parts of the Terrmian Night Market background.

● Changed weekly quests to now reset according to a specific day.
- All weekly quests will now reset every Thursday after midnight.
※ If you have accepted and/or completed but haven't handed in a weekly quest prior to this week's maintenance, the changed reset rule will apply immediately. Weekly quests that were completed prior to maintenance will follow the previous rule (reset one week after completion) and will reflect the changed rule once the previous rule's reset period has ended.
- The following weekly quests will now reset every Thursday after midnight.
We've changed weekly quests to no longer reset one week after the date of completion, but on a specific day. Now you'll be able to accept weekly quests after they reset every Thursday at midnight. This new reset rule will now apply to all weekly quests that were accepted and/or completed but weren't handed in prior to the maintenance. However, weekly quests that were completed before maintenance will adhere to the previous rule (reset in one week after completion). Holders of those quests will see the new reset rule effect once the weekly quest can be re-accepted.
We hope this change helps address the previous inconveniences caused if you forgot exactly when you completed a weekly quest, and/or how proceeding with weekly quests at a later date would continue to delay when you could accept the quest the following week.
● Adjusted the quest objective for the "[O'dyllita] Arienne's Ouk Pill" quests in the O'dyllita main questline.
● Added "[5-person Co-op] The Last Stronghold, Atoraxxion" and "[Lv.60] Orzeca's Records: Time of Dragons" to the Recurring tab in the Quests (O) window.
- You can look in the Recurring tab for other weekly quests similar to the above two quests.
● Fixed season characters who were proceeding with the pre-revamped main questline to be able to finish the Season Pass objectives listed below. Upon completing [Boss] Witch of Horrors, speak with the Black Spirit to complete the following Season Pass objectives:
- [Season Pass] We Meet Her, Again!
- [Season Pass] The Return of Kzarka
● Fixed the knowledge of "Dehkia's Will" and "Vaha's Records #22: Conclusion" to read more naturally.
● Fixed the quest objectives for the Atoraxxion main quests "Activation," "The Story Thus Far," and "Start of the Maze" to read more naturally.

Certain Conquest Wars rules will be changed. First off, in the spirit of providing a challenge for participating guilds and guild members, we've greatly boosted the rewards. Besides the potential tax benefits, a rather substantially-sized reward awaits those who emerge victorious in battle. Even guilds who fought their hardest and faced defeat will still earn a special reward, as well as one for guilds who liberate a territory.

In addition, we are planning to release the Territorial Decree system, where guilds who have won a Conquest War could enact policies over an occupied territory, which has been tested on the Black Desert Global Labs since this past April.

However, along with improved rewards, we've added AP/DP limits to the Mediah and Valencia Conquest Wars to offer more Adventurers a chance to participate. We've made sure to not set these limits too low, and they will be adjusted depending on the overall growth of our Adventurers over time. While the current type of limits are already fixed, we are also considering a variety of settings such as those that factor in class characteristics to administer selective limits (lower AP, Damage Reduction, but higher Evasion, etc.) in the future. Please note that we are still making additional developments to factor in limits to Accuracy as well.
Last updated: 8/04 12:37 (GMT+8)
● Now achieving victory in a Conquest War over Calpheon, Mediah, and Valencia will see all guild members receive a reward in addition to the general tax benefits.
- You can collect your individual reward from a Conquest War victory/defeat/liberation from the Guild Information (G) window -> Guild Member Status -> Reward button.
- You must retrieve your participation reward after a Conquest War ends in order to participate in the next Conquest War.
- Conquest War rewards will expire within 15 days upon receipt.
- Tax benefits remain the same and separate from individual rewards.

● Added a function button to recruit party members in the top left portion of the screen on the season server.
● Added the ability to choose the type (party/platoon) when writing an ad through the recruitment UI.
- Accordingly, you can now see the desired type in the party recruitment UI list. 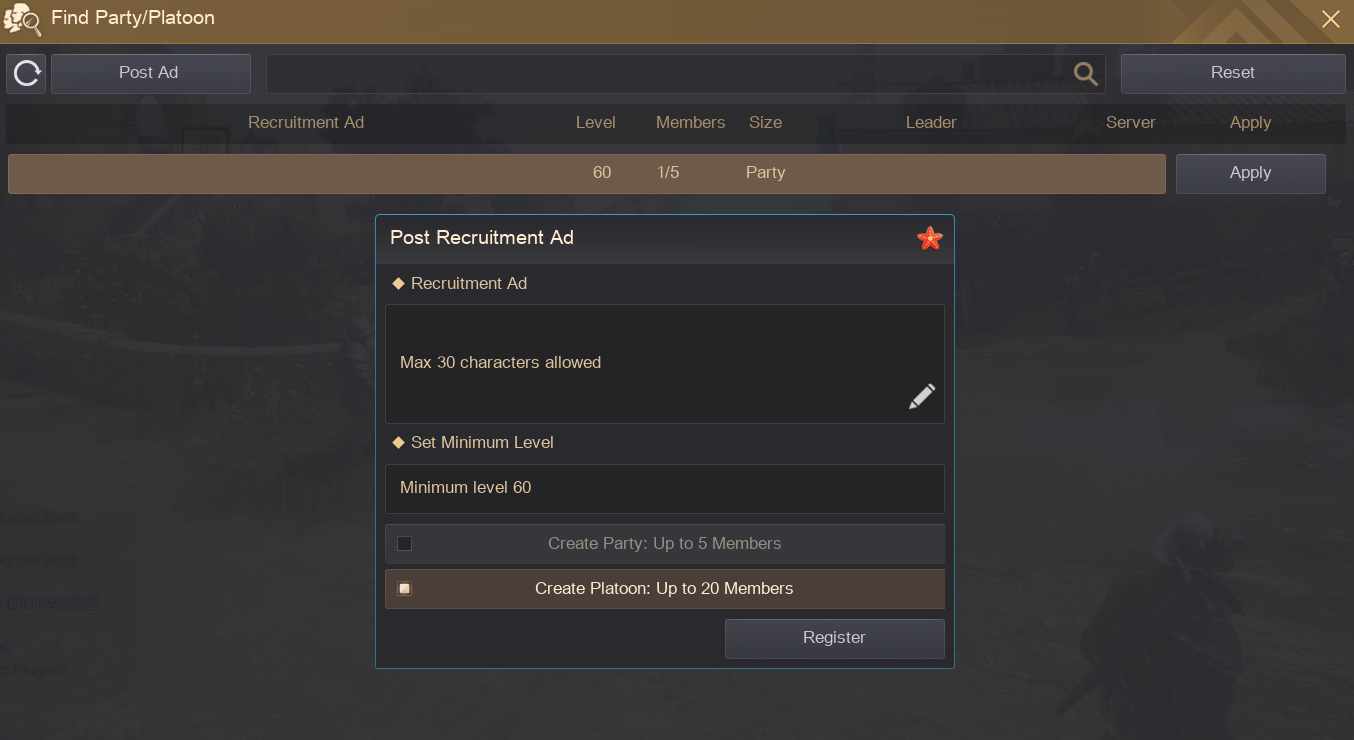 ● Changed the recruitment ad link that can be shared after writing and registering a recruitment ad for a party in the chat window to now connect you to the party recruitment UI once clicked on so you can respond to the linked ad immediately.

● Added a search function to search through all items held in your warehouse via the Sell tab in the Central Market. 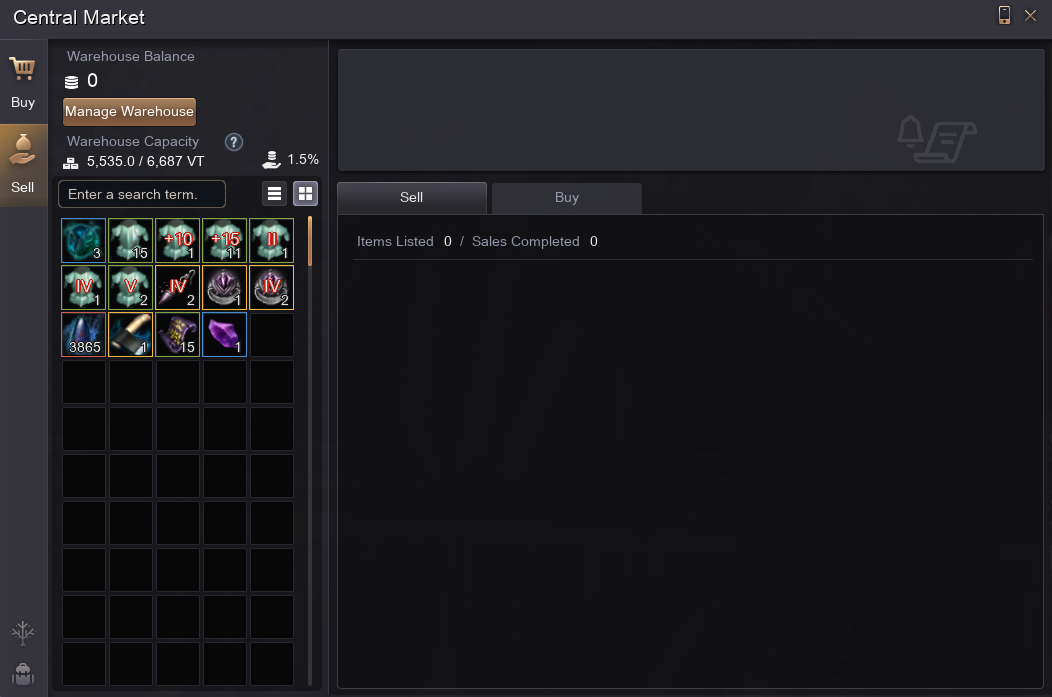 ● Talking with NPCs - Improved exchanging with NPCs to now allow you to select and exchange multiple items that do not stack at once. However, this does not apply to certain items that need to be exchanged with caution. 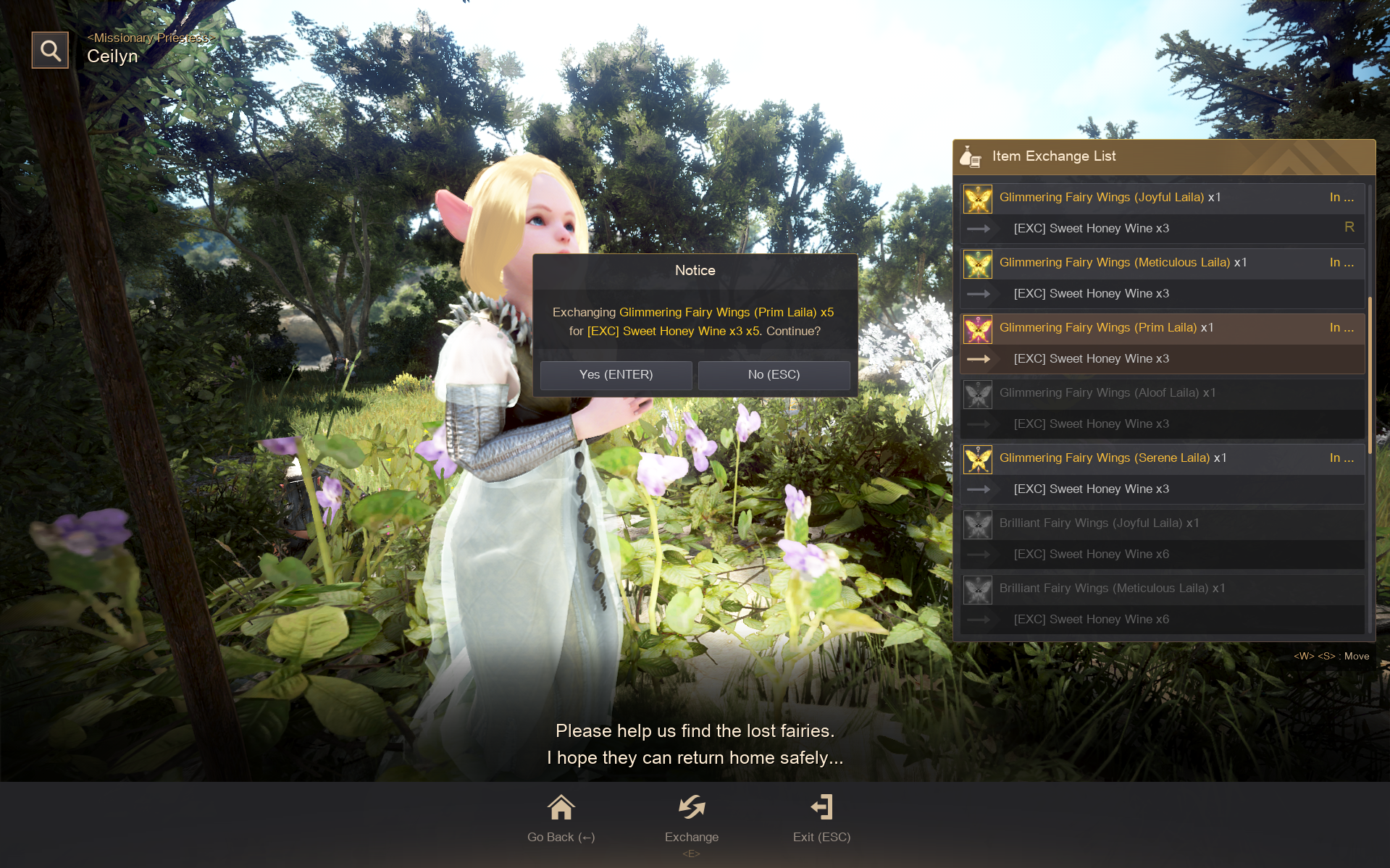 We've changed it so that you can now determine the actual number of items you wish to exchange, especially those that aren't stackable like fairies. While you may not frequent UIs such as these, we hope to continue updating various parts of the game that may feel somewhat inconvenient to use. We ask for your continued feedback.
● Added a guidance notification on how to obtain gear that can be equipped to the following slot when you click an empty equipment slot on the Equipment UI. 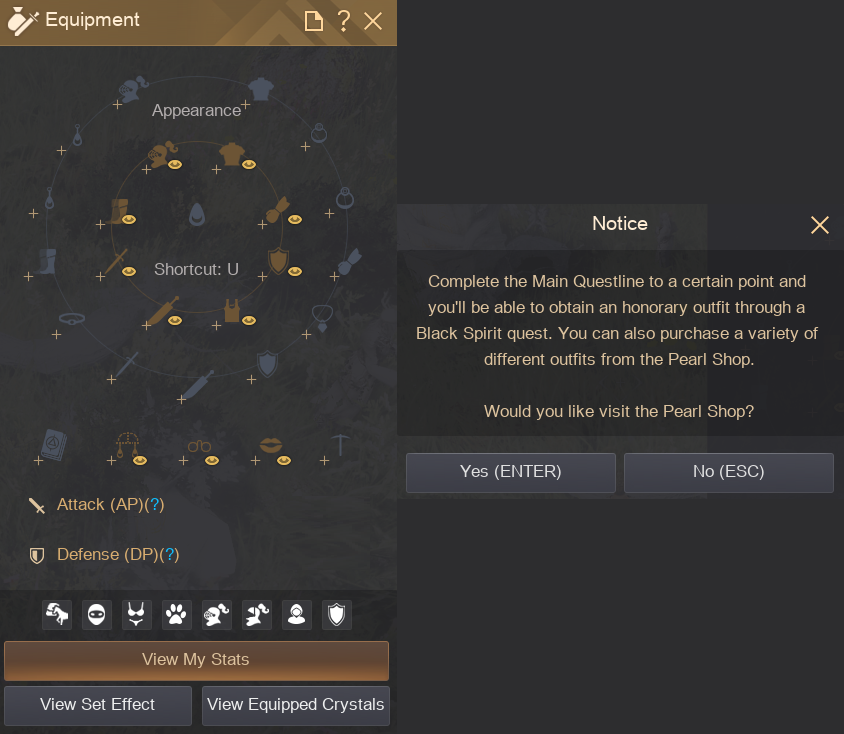 ● Added a message that tells you that you can quickly adjust the height of the chandelier while in Place Mode for your residence by using the CTRL + mouse wheel.
● Fixed the issue where the simplified Find NPC UI and another UI could overlap.
● Changed the simplified Find NPC feature to only appear for new/returning adventurers.
● Changed the butler/maid Group Command button to simply appear.

● Added a class symbol banner for all classes on their respective class introduction page on the official website.
● Changed the name of the sender for all text messages sent for identity and mobile number verification to "Pearl Abyss."