Here are the updates made to Black Desert on February 9, 2022.

(Patch size: approx. 858.01 MB)
- Please note that the update for Steam may be larger than the size listed above.

Event 1. Guess the Victor of the Global Conquest War!

Event 4. Where Are My Keys?

Event 6. What Lurks Within the Dark Rift?

The Gyfin Rhasia Temple (Underground) rework that was announced during Calpheon Ball is here.

Unlike the ground level of Gyfin where you need to form a party of 5 and move through each area, the underground level was reworked to be a solo monster zone. Following this change, the monsters in the temple have grown significantly stronger, so we recommend this monster zone for veteran Adventurers (Optimal AP: 300 / Optimal DP: 380).

The fights will be focused around the gigantic Gyfin Rhasia Tower of Transfusion found in each of the rooms. There are petrified Ancient Weapons located near the towers, and the Gyfin Rhasia Decimators can be found roaming nearby. You can awaken the petrified Ancient Weapons (Flamen, Guard, Crusher) to fight them. Each of the Gyfin Rhasia have an “emotion” they hold. Defeating them will rewards you with different buffs. The buffs give additional damage against monsters of the same emotion. This adds a layer of strategy to your rotation as you will need to take proper advantage of the buffs for efficiency.

Additionally, the path in Gyfin Rhasia Temple (Underground) is long and it can hold as many Adventurers as there are “Towers of Transfusion.” So, your rotation won’t overlap as much with another Adventurer’s rotation. We tried to present Gyfin Rhasia Temple (Underground) as a fresh new monster zone our veteran Adventurers can enjoy. We hope you will enjoy defeating these Ancient Weapons. 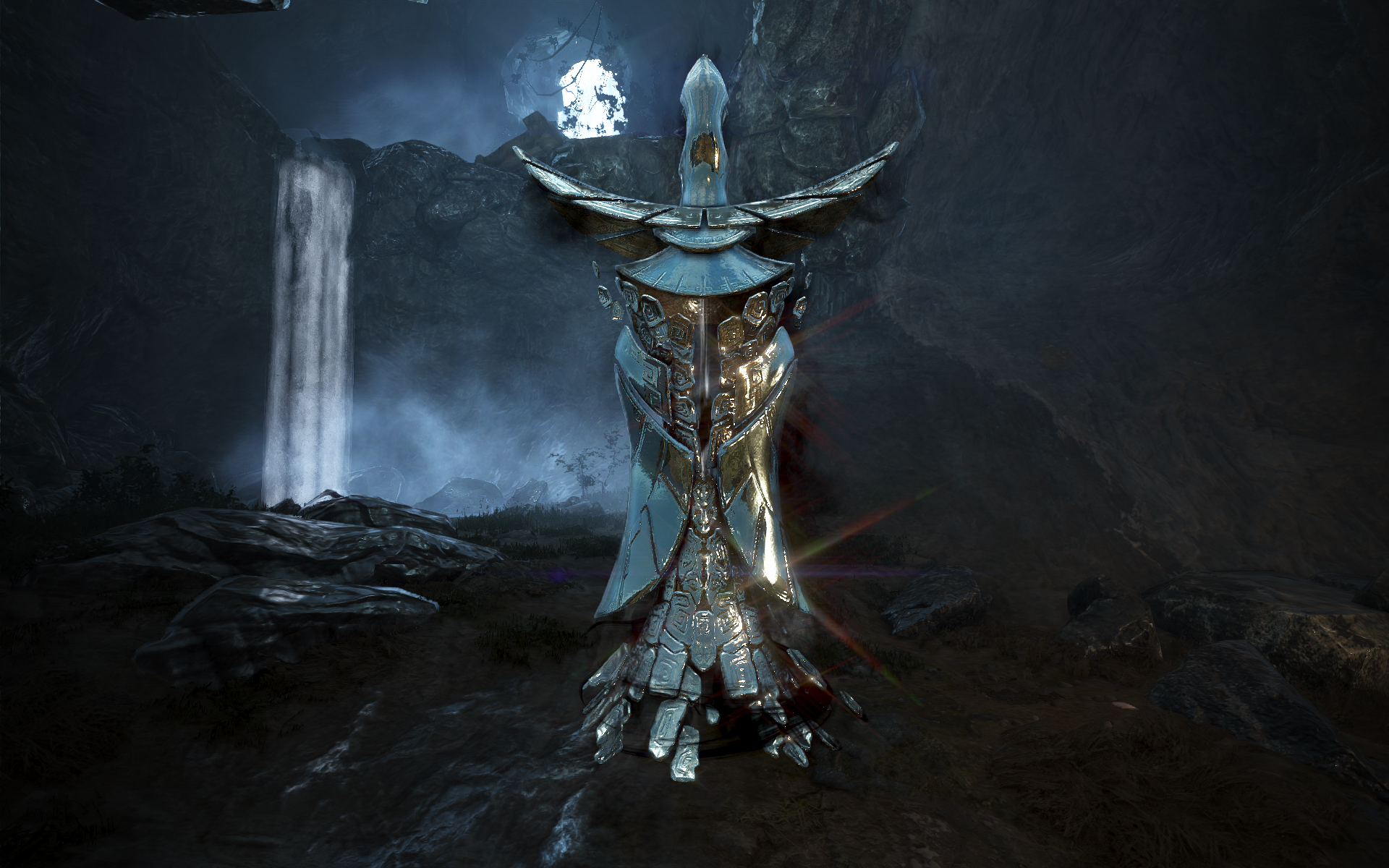 ● You can obtain the following buffs when you defeat each of the "Burdened" petrified Ancient Weapons: 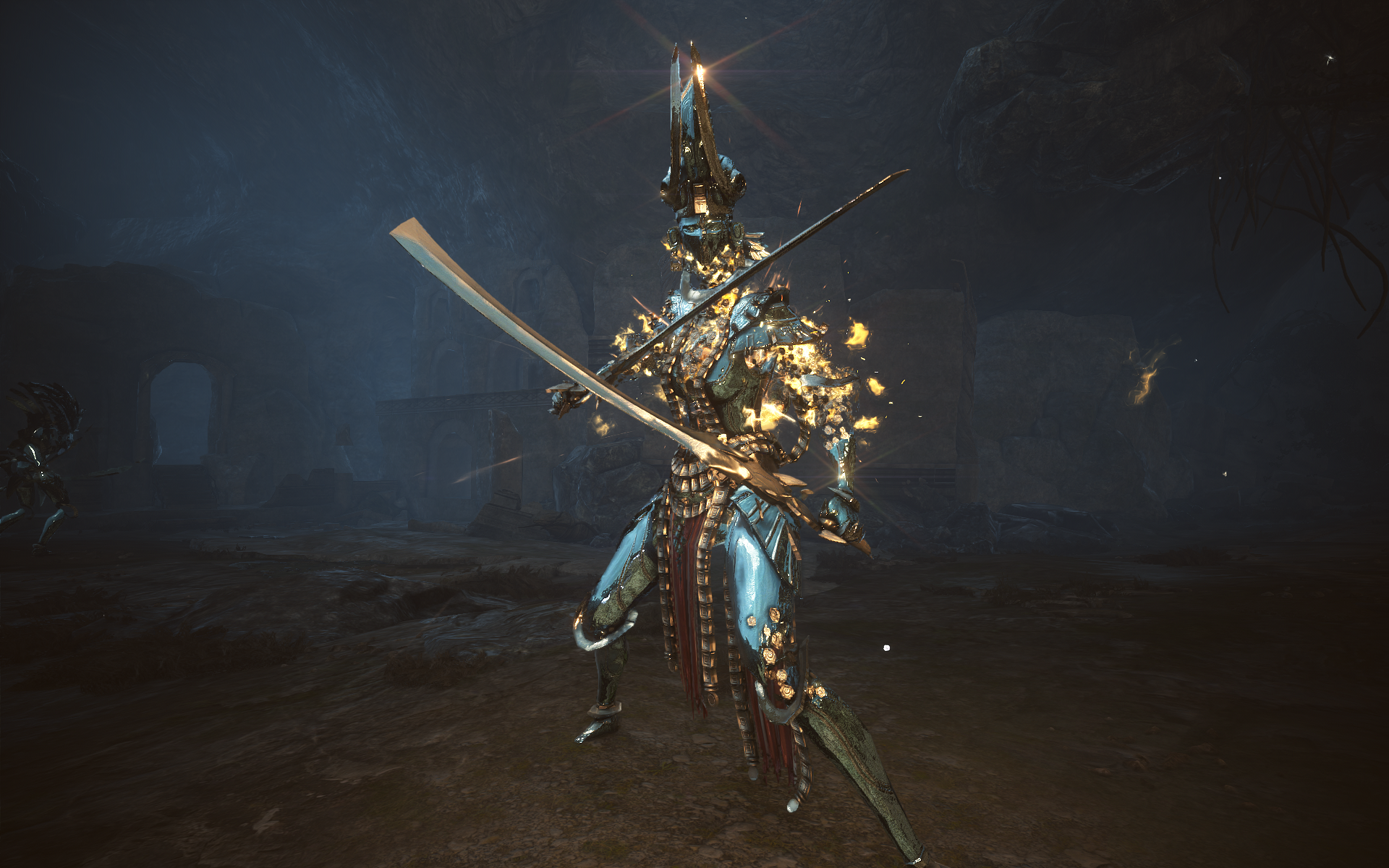 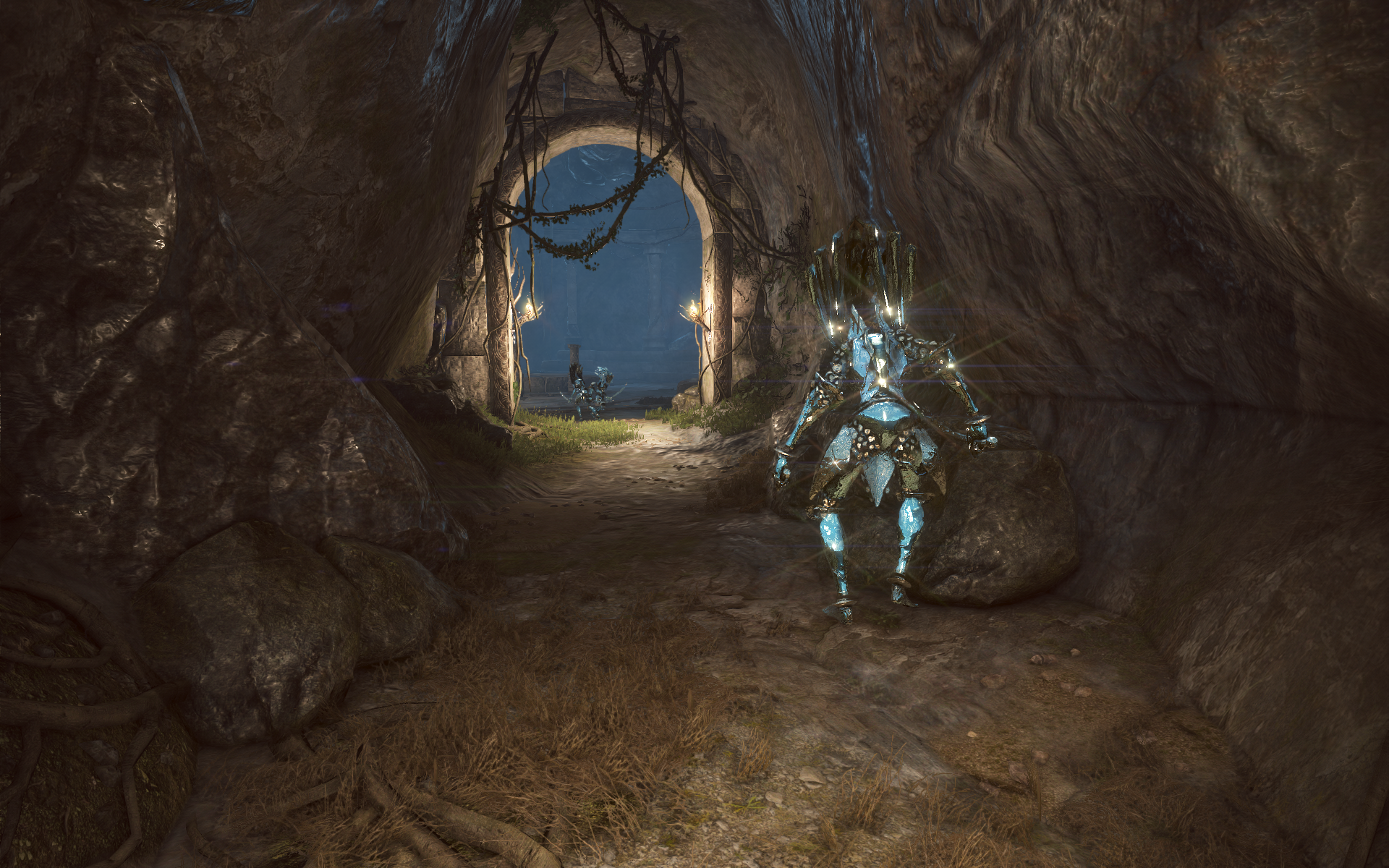 ● Added two daily quests you can accept and complete in the Gyfin Rhasia Temple (Underground).
- You can accept and complete the quest with a Lv. 58 or higher character with the Knowledge on the NPC Tulitua (obtained from the Kamasylvia main questline). Also, you can check the quest when you have "Other" activated on Quest Type.
- You can find "[Daily] Chaos From Below" and "[Daily] True Rest" under "[Lv. 58] Gyfin Rhasia in Chaos" from the Recurring tab in the Quest (O) window. 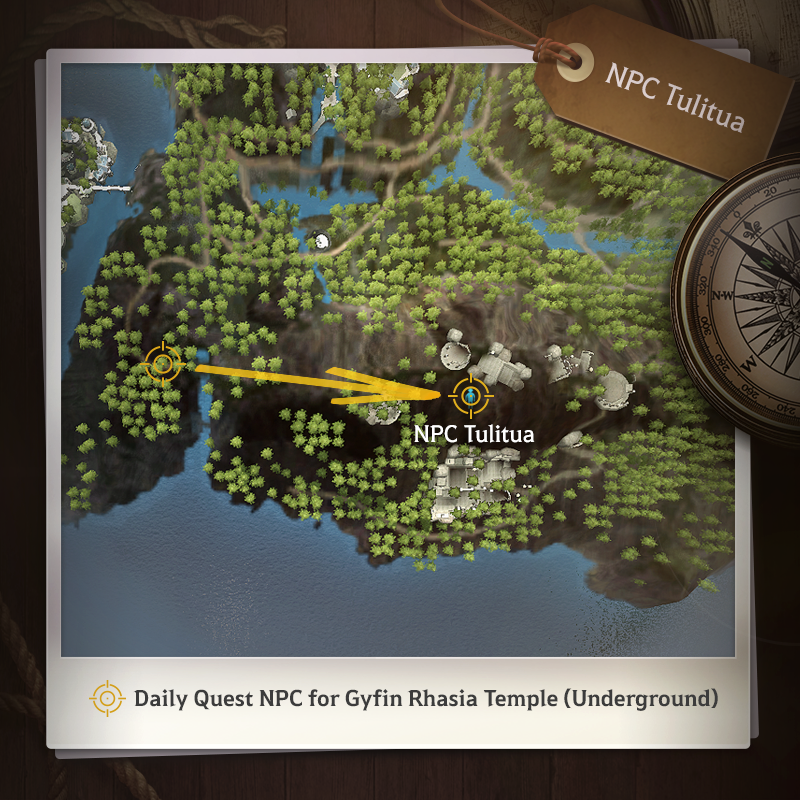 ※ Old Tree's Tear and Earth's Tear can be obtained according to a set probability by gathering with a Fluid Collector or Mining, respectively.
※ You can obtain [Guild] Blueprint: Drill x4 each time you complete a Guild Mission.
* Urgent guild missions requested by the people of Margoria will not be rewarded with [Guild] Blueprint: Drill.
- Complete a Guild Mission during the event period up until Feb 16, 2022 (Wed) and get "[Guild] Blueprint: Drill" x10.
* This excludes urgent missions from the people of Margoria and guild barter missions.
[Go to the "This Is Not a Drill, It's a Guild Drill!" event page]
- Once crafting is complete, the [Guild] Drill can be installed on any desert terrain in your guild's base server group.
- Using the [Guild] Drill Assembly Set in the desert will begin installation, during which it cannot be damaged.
- [Guild] Drill Assembly Set takes approximately 15 minutes to complete installation, and cannot be damaged even by enemy guilds during this period.
- Once the [Guild] Drill is complete, you can interact with it to fill it with [Guild] Drill Fuel kept in your Guild Storage to activate it.
- The [Guild] Drill requires [Guild] Drill Fuel x5 to activate.
- Once construction is complete, enemy guilds will be able to damage it immediately. If your drill has already been activated with fuel, you will be partially compensated if your drill gets destroyed.
- If your [Guild] Drill has been either idle for more than 1 hour after construction or has no fuel when it is destroyed, you will not be able to claim a reward.
- Once the [Guild] Drill's drilling has completed, the drill will be consumed, upon which you will be able to claim your reward from the Guild Activity Reward UI for the next 30 days.
- Rewards from the [Guild] Drill can be obtained by all guild members.
- With the [Guild] Drill, you can excavate a variety of items from the Great Desert of Valencia, including spoils of war from buried soldiers, ancient weapon parts, trade goods of merchant guilds covered in sand, and fossils sought by scholars.
● Added the Pilgrim's Stone item.
- You can obtain the Pilgrim's Stone as a reward from drilling.
- Select Grinding from the Processing (L) window with the Pilgrim's Stone to obtain Sharp Black Crystal Shard, Hard Black Crystal Shard, and Mass of Pure Magic.
● Added [Guild] Covenant of Blood to items obtainable by completing the [Guild] Drill.
● Added new Guild Skills you can learn from consuming [Guild] Covenant of Blood.

※ Can be stacked with other Guild Skills.

● Added rewards for either successfully drilling with the [Guild] Drill or if the drill is destroyed.

- Items that you can obtain from the Faded Trader's Box, obtainable via the Drill, are as follows: 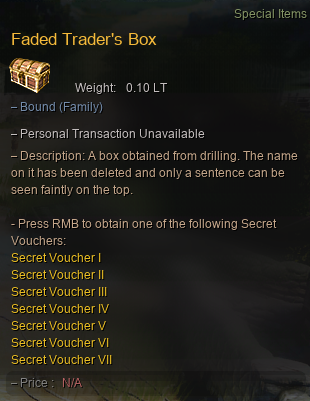 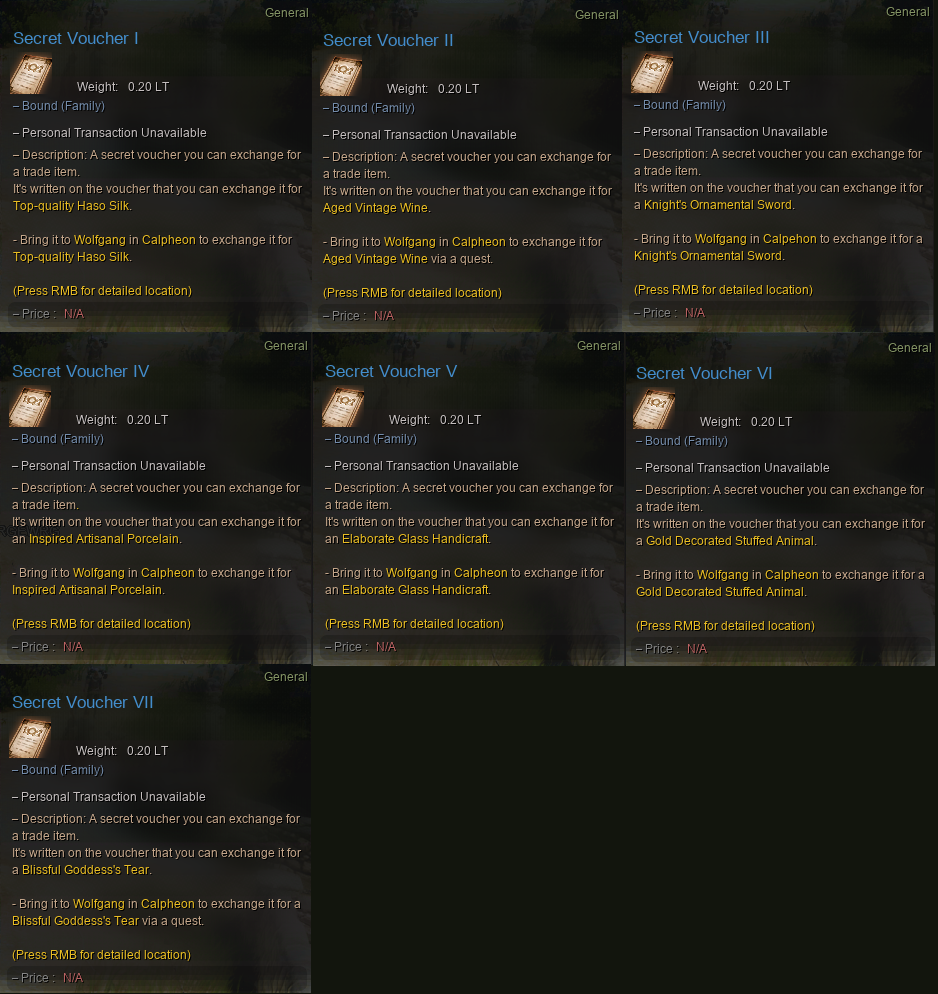 - Open the Faded Trader's Box and you'll obtain a Secret Voucher I-VI. You can take these to the NPC Wolfgang in Calpheon to exchange them for the following items. 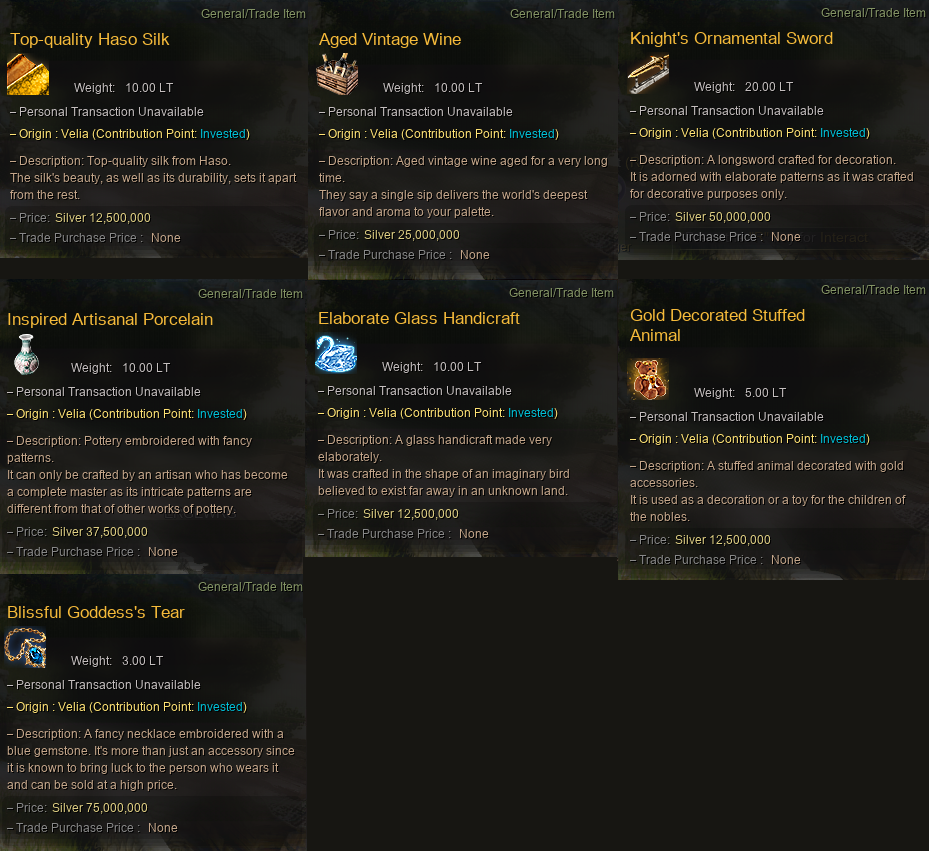 - You can obtain the Traces of Time Fossil Fragment with the drill. If you use Grinding (L) on it, you'll be able to obtain one of the following items according to a set probability. 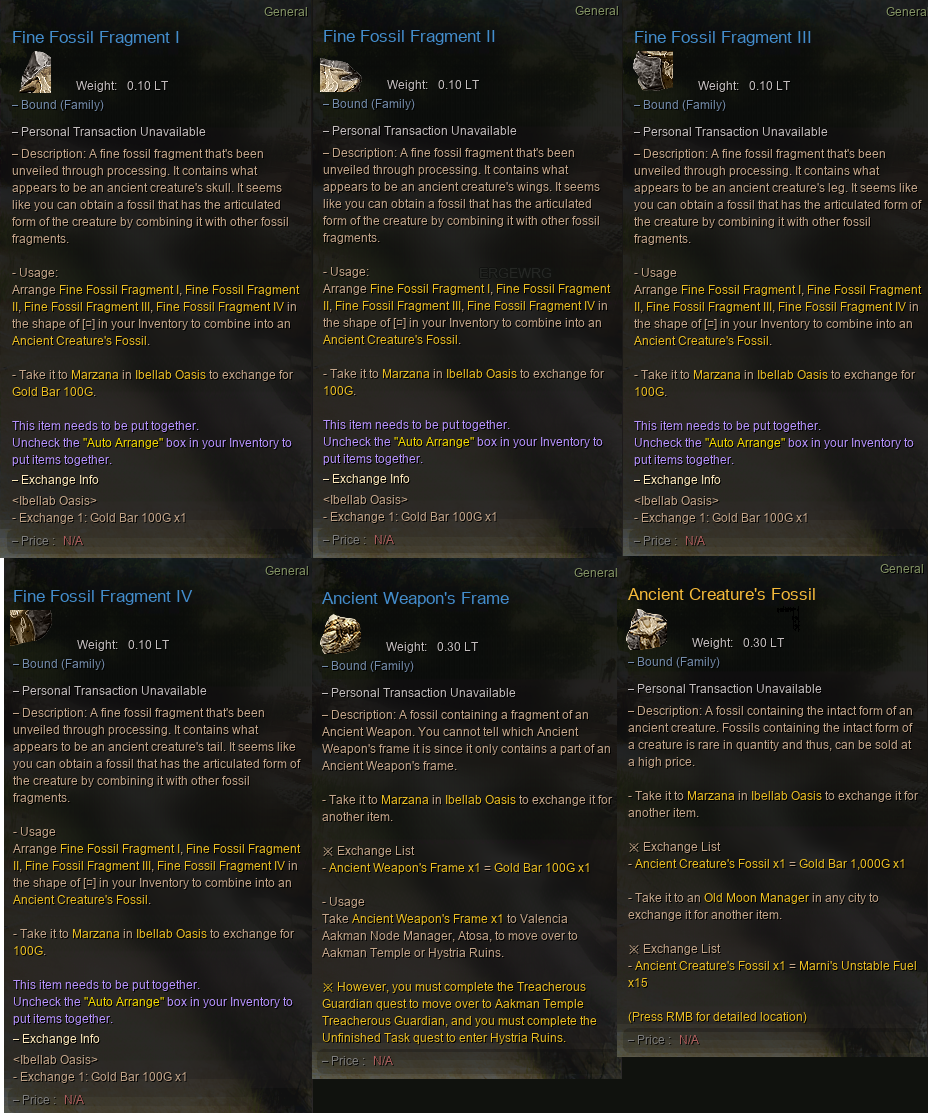 - You can obtain the Lone Soldier's Identification Tag from the Nameless Warrior's Keepsake. You can bring this to the NPC Yisar Pjetyo in Tarif to exchange it for an Enchanted Scroll (+35). 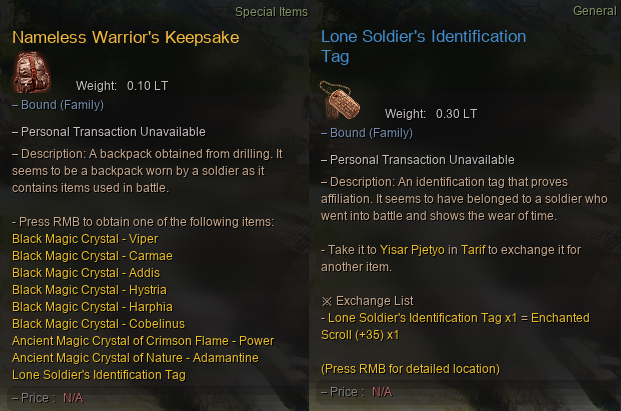 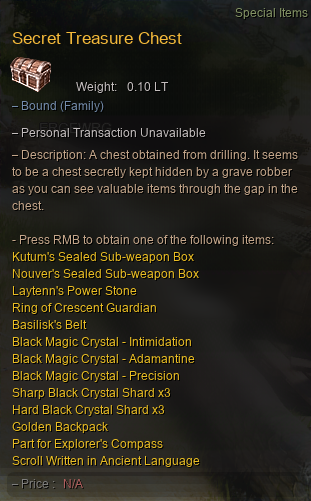 ● Violation (II to III) - Fixed the issue where Knockdown wouldn't be applied when performing down slash by pressing LMB.

● Fixed the issue where the appearance of your sub-weapon would appear abnormal when jumping forward with your main weapon.

● Purificatione - Fixed the issue where the sound effects wouldn't play when comboing into the skill after certain skills with your lancia.

● Rampaging Predator - Fixed the issue where Forward Guard would only be applied at the start of the skill after certain skills.

● Constriction - Changed to slam down the grappled enemy in front of your Hashashin.
● Alleviated the issue where Bound would not be applied sometimes on Grapple while Super Armor is applied.
● Fixed the issue where your character's motions would appear abnormal when holding directional keys after using the following skills midair.
- Sand Warp, Paradise Surge, Sin Splitter, Piercing Tornado, Sand Slicer, Crown Kick, Silent Breach, Flow: Condemnation

● Prime: Passed Pawn (I to III) - Improved all the guards to appear and attack regardless of Nova's Casting Speed when a summoned guard is present upon learning the skill.
● Icy Fog - Fixed the issue where Quoratum's Protection would deactivate after using certain Succession skills.

- The changed prices for the processed trade items that can be produced via the Fish Factory are as follows: (previous price = 100%)

- The changed prices for each grade of the processed trade items that can be produced via the Mineral Workbench are as follows: (previous price = 100%)

- The changed prices for each grade of the processed trade items that can be produced via the Wood Workbench are as follows: (previous price = 100%)

● Added a function that enables you to craft an Elsh main weapon for each class via the Weapon Workshop, Handcraft Workshop, or Carpentry Workshop.

● Improved to play the proper sound for the environment when it snows (sound of the wind).

● Fixed the issue where the Indomitable Flag of an area would be destroyed when Node Wars are in progress in that Node and another Node simultaneously, even when the Node War of the second area had ended.
● Added a function that allows you to activate installation mode without owning an assembly tool for installation on the Remote Installation menus for Forts and Annexes. 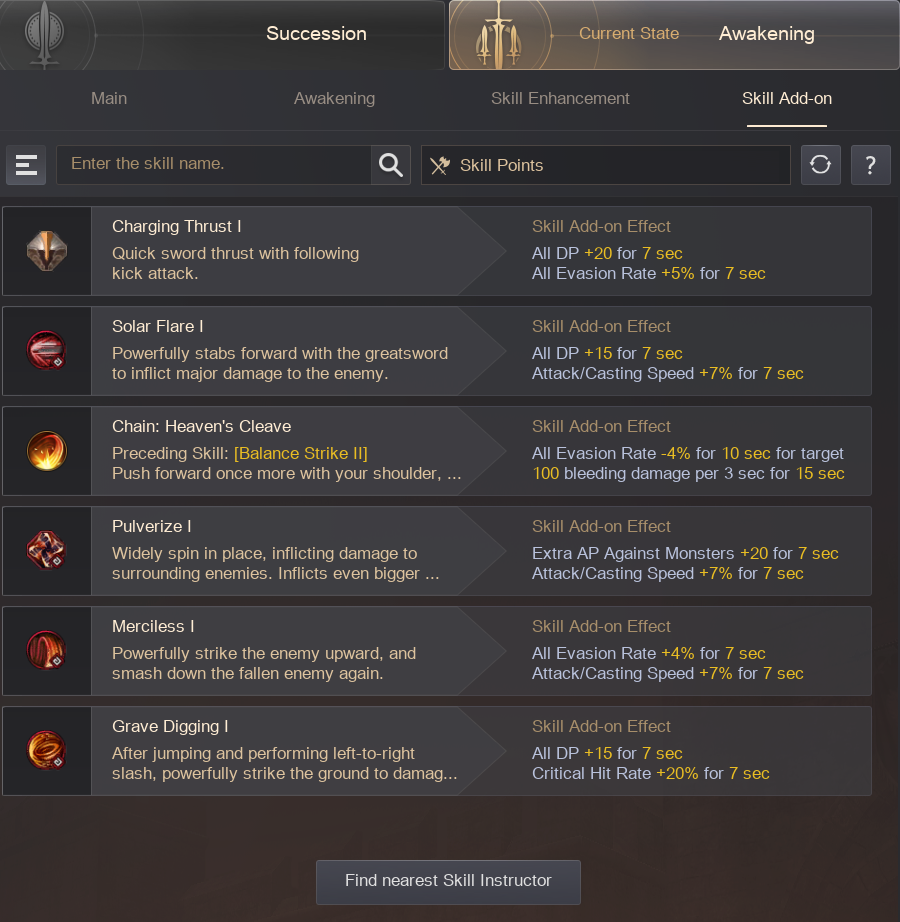 We added a function to your current skill add-ons immediately from the Skill window without having to go to a Skill Instructor. We also added the "Find nearest Skill Instructor" function so that new Adventurers can use the skill add-on system with greater ease and comfort.
● Fixed the issue where Abyssal Gaze wouldn't be displayed for the Crypt of Resting Thoughts on the Item Drop Information UI.
● Added a UI that provides information on the extra points you gain when successfully reclaiming a territory controlled by the opposing team in Red Battlefield: Valencia City.
● Enlarged the size of the "Do not open for the day" button on the description text displayed when using the Navigate function on an Elvia Realm server.

● Improved the Photo Gallery menu and color shade of the UI.