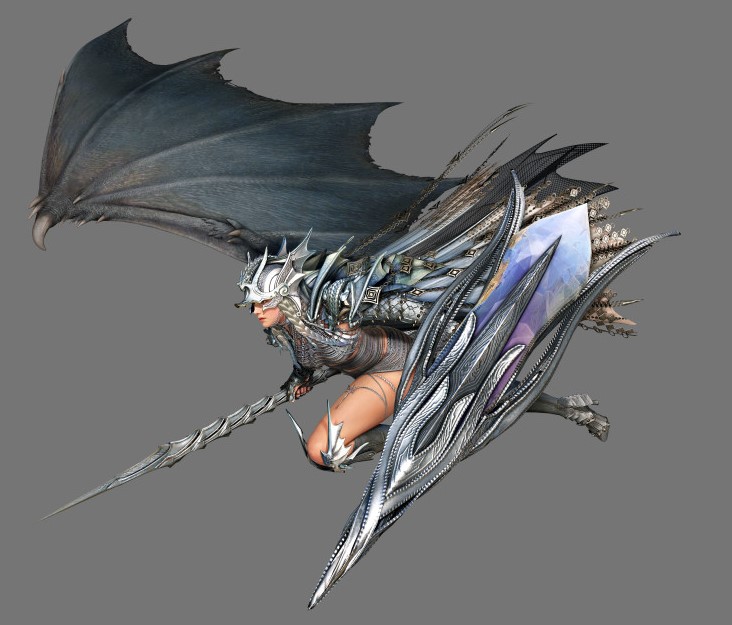 A flame that can consume even the gods...

How much of its overflowing power can a mere mortal bear?

O daughter of mine,

greed is the source of wrath...

And that flame which fuels it must be extinguished.

Only then will the long-lost paradise of dragons return.

A place so unattainable, it may as well not have existed.

Heeding the deep and somber voice,

I walked, and I walked, along an endless cliffside path,

gathering bones upon bones of my fallen kin.

On this path bereft of color and life, I often wished to hurl myself off its edge,

soaring triumphantly into the sky, a reminder I yet lived, however...

For that brutal tyrant still reigns the skies."

Whenever such thoughts came to me, they echoed in a voice not my own,

an unsought and unchecked edict.

Fettered wings are nothing more than a blight upon one’s back.

For so long, Dragons were pinned beneath the tyrant’s claw,

until a voice, steeped in malevolence, called out from that bitter path’s end.

“Build your paradise upon my body.

With my death, I will usher in the ruination of the golden mountain."

A shriek rang out, and a brilliant ray of light, puncturing a small hole,

like the pupil of an eye, in the barrier that marked this bitter path’s end.

The aperture dilated, growing brighter as the barrier crumbled away.

Someone was waiting there, with arms outstretched.

Was she the one who led us here?

My heart pounded with excitement...

The air was thick with the stench of blood that flowed from her jaws, torn to the ear.

It was the blood of my dead kin, interwoven with their resentment, their hatred, their tears;

the same kin I had tirelessly comforted.

Etched in this torrent of blood were the final memories of my kind.

Things I’ve never seen, heard, or experienced, but somehow, I was present in them all.

"I am the seventh witch of the Eternal Winter, Erethea."

"Tell me, how many Dragon hearts have been pierced by the power of erasure,

which could wash away even the fear of the one you claim a tyrant?"

Her body in tatters,

and through coughing fits of blood,

her hoarse voice pealed mirthfully at some unknown joy.

"Come. tear out my heart and consume it.

It’s been sweetened with the hatred of countless, fallen Dragons."

The witch’s laughter reignited the hunger within them.

No one asked why she chose this death.

Everyone sought to sate their thirst for vengeance.

The feast was a blur of teeth and sinew,

but when I came to my senses, I saw us reflected in her empty eyes.

In my mouth, I held her still-beating heart.

"It is done, child. My vengeance... will live on eternally."

Not a single scream had left her lips,

as the witch lay lifeless, seemingly mocking us with her grin.

Was it her defiance that only added to our anger?

My heart began to race uncontrollably.

Through your eyes shall I witness the golden mount's ruin.”

Now, with my wings no longer bound,

they slowly unfurl, as I gaze readily toward the edge.

The winds whirl against my skin, beckoning me beneath the blinding light.

Frustration, despair, and the faint allure of paradise tickle my nose.

"Proclaim defiantly, to the incarnation of Labreska, that a new era has dawned.

With the power of erasure, usher in the ruination of the golden mountain."

With the whispers of the being, black-winged like us, less one eye, still echoing in my head,

I stood at the cliff’s precipice with wings spread wide.

The moment of flight that had flashed countless times in my mind.

A burning thirst, ignited by the winds of freedom in the dazzling sky.

"Come. Begin your flight of destruction. The lost paradise of Dragons awaits." 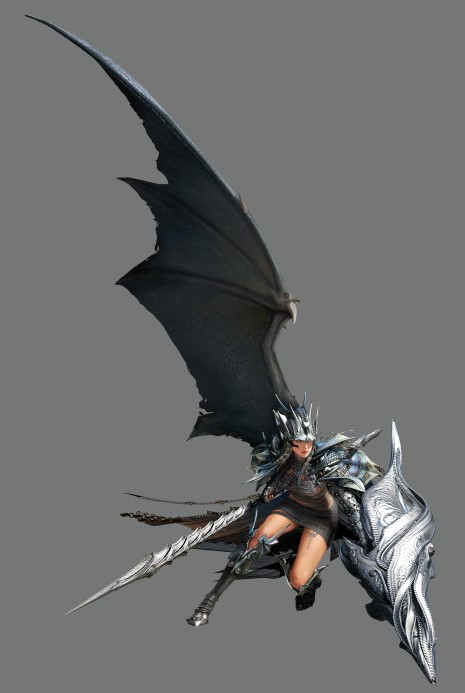 Meaning spear in the tongue of dragons, Trion is Drakania’s exclusive weapon, and it takes the form of two spears.

At first glance, it looks like a normal weapon, but it transforms into a completely different state when wielded by Drakania.

Her “Hexeblood” state can be seen as her human form, in which she expertly wields both trion spears to stab and slash her enemies. While in her “dragonblood” state, her combat style is based on a “dragon form.” In this state, the trion on her left-hand takes the shape of a dragon’s horn, allowing her to crush enemies or brace herself with its heft.

You can say that only Drakania can wield the trion.

💬 Our combat direction for Awakening Drakania was developed around her wielding two spears. We chose this type of weapon as we felt that it would be the best match for her concept and story, giving Adventurer’s feeling of wielding a “dragon’s might.”

Her combat style is largely divided into two styles, Hexeblood and Dragonblood. She can switch back and forth between both, and her combat style will differ depending on her state.

In her Hexeblood state, she wields two smaller spears to unleash a barrage of quick and agile attacks. When Drakania was released, we saw some feedback that while her concept was good, her slower speed was disappointing. That’s why we wanted to provide a more agile combat style with her Awakening in sharp contrast with her Succession.

On the other hand, her Dragonblood state emphasizes her draconic nature in the form of destructive power unlike the speed of her Hexeblood state. In this form, Drakania’s left-hand spear is transformed into a dragon’s massive horn, and her dragon-aspect can be seen in her skills.

Differing from our existing classes, we started developing Awakening Drakania after the release of her Succession. As this was a new direction for us and with so many people eagerly waiting for its release, we’re thrilled to be able to present you with this announcement. We hope you enjoy it.

Then drive your trion into their hearts.

Channel the winds into your trion’s left spear,

ascend, then come crashing down to the ground.

Hexeblood – Combine both spears to channel the winds then charge toward the enemy.

Dragonblood – Combine both spears, then unleash the winds forward to push back the enemy.

Hexeblood – Channel the winds into your trion’s left spear, then unleash them forward.

Set your right spear aflame, then leave a burning claw mark on the ground.

Dragonblood – Channel the winds into your trion’s left spear,

then call upon the might of Dragons to unleash an earthshattering roar forward.

Your destructive Dragon breath decimates all enemies ahead.