(Patch size: approx. 943.87 MB)
- Please note that the update for Steam may be larger than the size listed above.

Event 1. Bless the wells down in Calpheon!

Event 4. Unwrap your gifts from beneath the happy winter tree!

Regeneration
◆ Fixed the issue where the Seed of Nature wasn't visible during the skill.

◆ The territories of Serendia, Mediah, and Valencia are now offering monster subjugation missions to guild members.
◇ Previously existing [Boss Subjugation] missions have all been changed into the following:
◇ Proceed with the following guild missions to be rewarded with items such as Guild Boss Summon Scroll Pieces (Giant Mudster, Ferrid, or Puturum), Guild Skill EXP, [Guild] Blueprint: Drill, and [Guild] Luxurious Support Box.
※ You can only accept [Boss Subjugation] guild missions appropriate for your guild size.
(For example, if you're in a medium-sized guild, you can only accept "(Medium)" [Boss Subjugation] guild missions.)
※ You will obtain a Guild Boss Summon Scroll Piece of either Giant Mudster, Ferrid, or Puturum depending on the type of mission you accept.
◆ Improved the objectives of the Herald's Journal Vol. 3 Chapters 1 and 4.

◆ Fixed the issue where you could open the door by interacting with Yeonhwa without having proceed with the quest during "[The Magnus] Southward Travels."

◆ Changed the cooldown of the following items that can be obtained when you pre-reigster for the new class, Woosa.
◇ Blessing of Fragrant Wind
◇ Blessing of Breathing Earth

◆ Fixed the issue of Blessing of Fragrant Wind and Blessing of Breathing Earth cooldown being reset in certain situations.

◆ Improvements to the Murrowak's Labyrinth monster zone are as follows:

◆ The following monsters will stop pursuing you and return to their starting position if they are too far away from you in Atoraxxion: Yolunakea:
◇ Oreturem, Syketurem, Vayeturem
◆ Now, "

Golden Tears of the Desert" when you defeat the following monsters in Atoraxxion: Yolunakea in co-op mode:
◇ Lekra Vuhuma, Sebekaruk
◆ Fixed the issue where the movement animation looked unnatural if your stamina was low while riding Krahtenn after using the "

Rawr-Rawr, king of the Grass Rhinos who graze over the fields of O'dyllita, has been discovered. Protected by its tough Grass Rhino hide covered by thick layers of soil and vegetation, Rawr-Rawr's sturdy nature is known far and wide. Rumors abound of a means to utilize its notable characteristic, and many hunters have decided to see if there lies any truth to the matter themselves.

Alas, many a hunter have tried, but not one has yet to return with any confirmation of the ongoing rumors. Some of the more seasoned hunters who sought out and tried their hand at taming the beast have mentioned Rawr-Rawr's exterior hide and horns are extremely durable and dangerous, thus requiring a full-fledged party of able-bodied hunters to take it down, akin to hunting parties for Fugitive Khalk, King Griffon, and Blue Whales.

◆ The blare of matchlocks awaken Rawr-Rawr, king of the Grass Rhinos, from his deep slumber in Narcion, O'dyllita.
◇ As a field Hunting boss, Rawr-Rawr will require a greater number of like-minded adventurers to take down.
◇ Defeat Rawr-Rawr to obtain the items below: 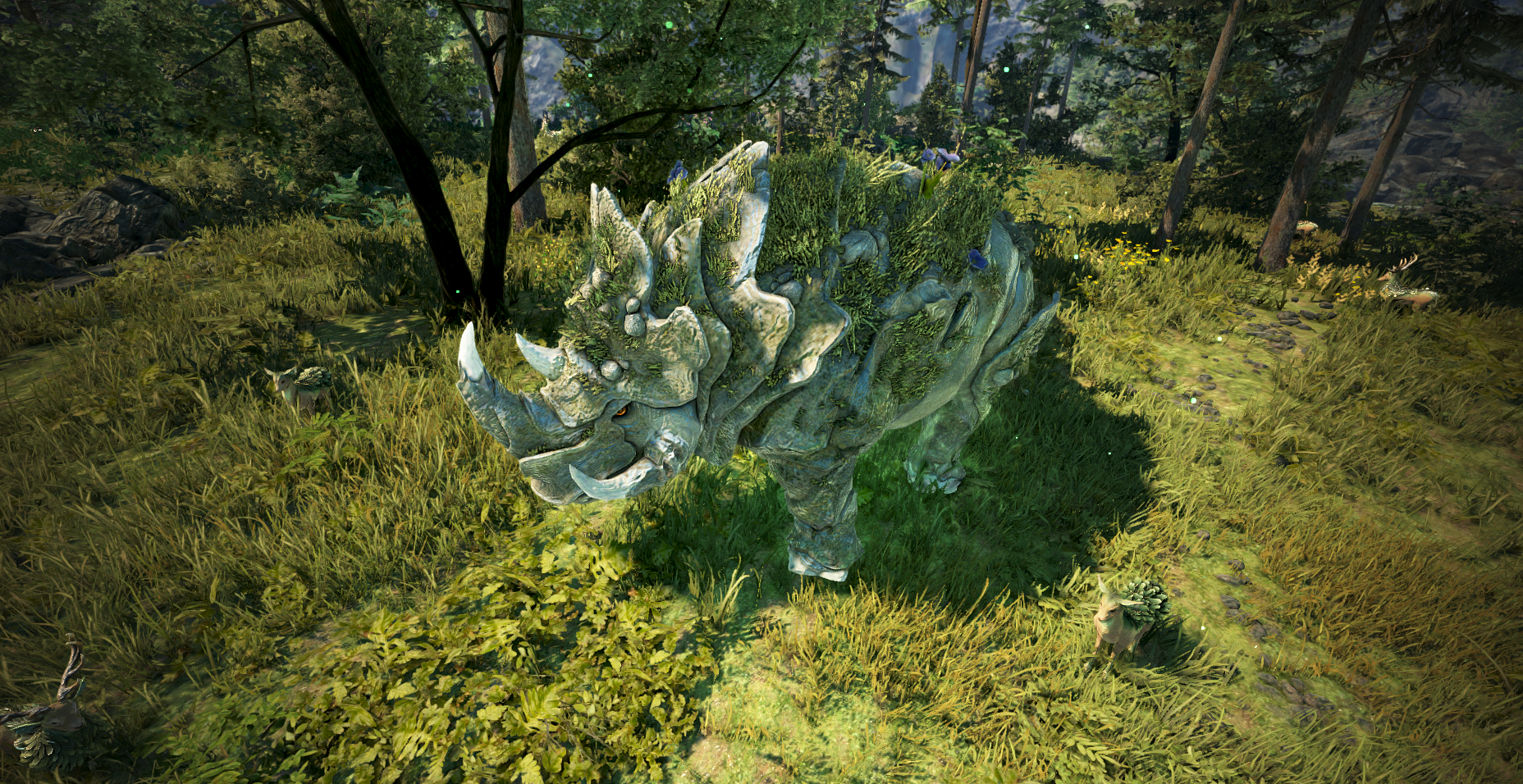 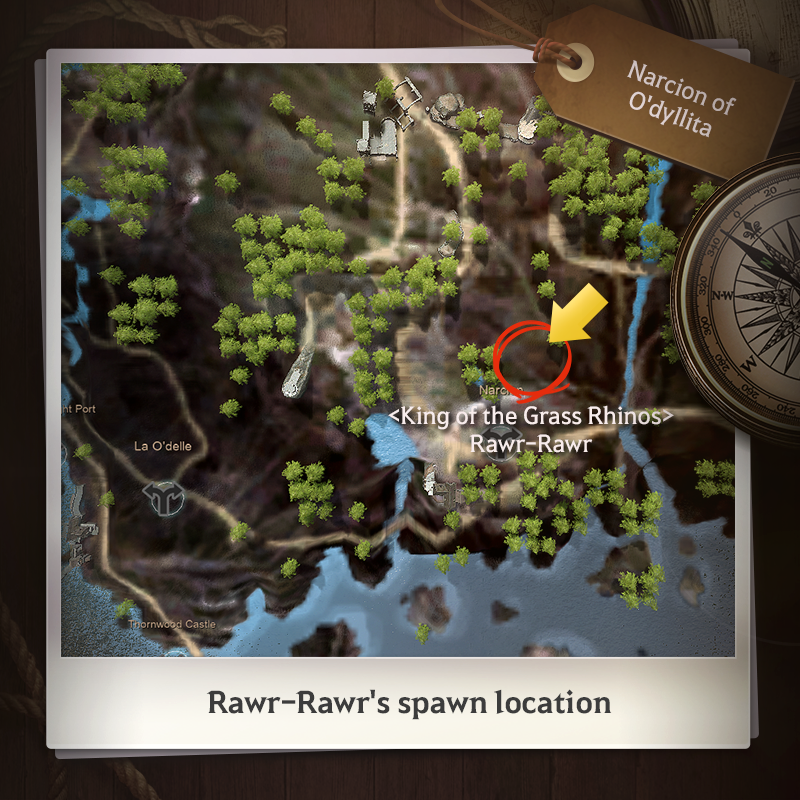 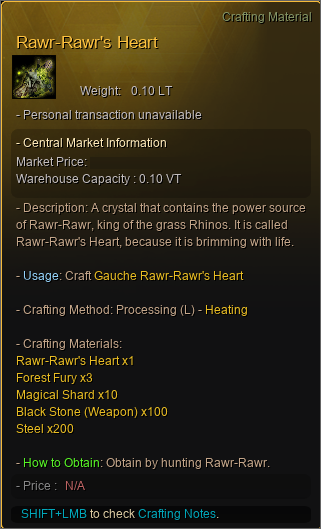 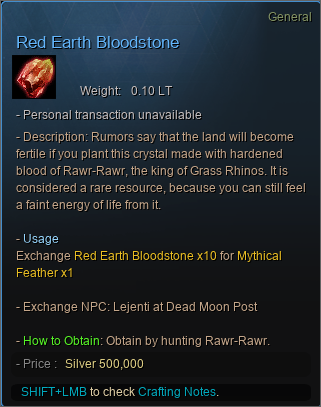 ◆ Added a questline that reveals the past travels of Ataraxia before her tragic fall.
◇ In this quest, you will follow the footsteps of Ataraxia by using the power of Ataraxia's Hourglass.

How to Accept Quest

- After you have completed the "[O'dyllita] The First Barbarian" quest, you can accept the quest at the Dark Knight's hideout located at the Olun Valley from Arethel of the Obsidian Ashes.
※ You can check this quest via Quest Type - Combat in the Quests window (O).
※ You can check the quest "[O'dyllita] The First Barbarian" via Quest window (O) - Main - [Lv. 60 O'dyllita II] Gem of Imbalance.

- This questline consists of the following quests.

◇ Obtain the rewards below after completing the questlines.
- Obtain 9 Knowledge entries for Ataraxia's Energy by following Ataraxia's Footsteps.
- Obtain Fig Pie Chef title.
- Added an additional quest where you can obtain Ah'krad once per Family.
- You can acquire Musical Spirit Wall Lamp and its knowledge only once per character.
- You can craft the following materials via Manufacture (L) while in possession of the Musical Spirit Wall Lamp knowledge.
* Pure Nickel Crystal x20, Shining Powder x20, Spirit's Leaf x10, Melody of the Stars x7, Fragment of All Creations x7

How to Obtain Melody of Stars and

Fragment of All Creation:

How to Obtain Fragment of All Creation
- Obtain yellow-grade accessories via Simple Alchemy (L).
- Previous Usage: Craft Courage of Narc,a material for Obsidian Specter's Energy. Craft Refined Essence of Emotions to extract reformed accessories (Cup).
- Added Usage: Furniture Crafting Materials for Musical Spirit Wall Lamp
◆ Improved the issue of not being able to interact with NPC Emma Bartali until a specific questline is completed during the Magnus questline.
◇ After Emma Bartali recovers from her fallen state, she will move to the original location in Bartali Farm where you can proceed with the quest via "Interaction."

◆ Winter has arrived in Black Desert.
◇ Enjoy the snow and the aurora that stretches across the sky during your adventures! 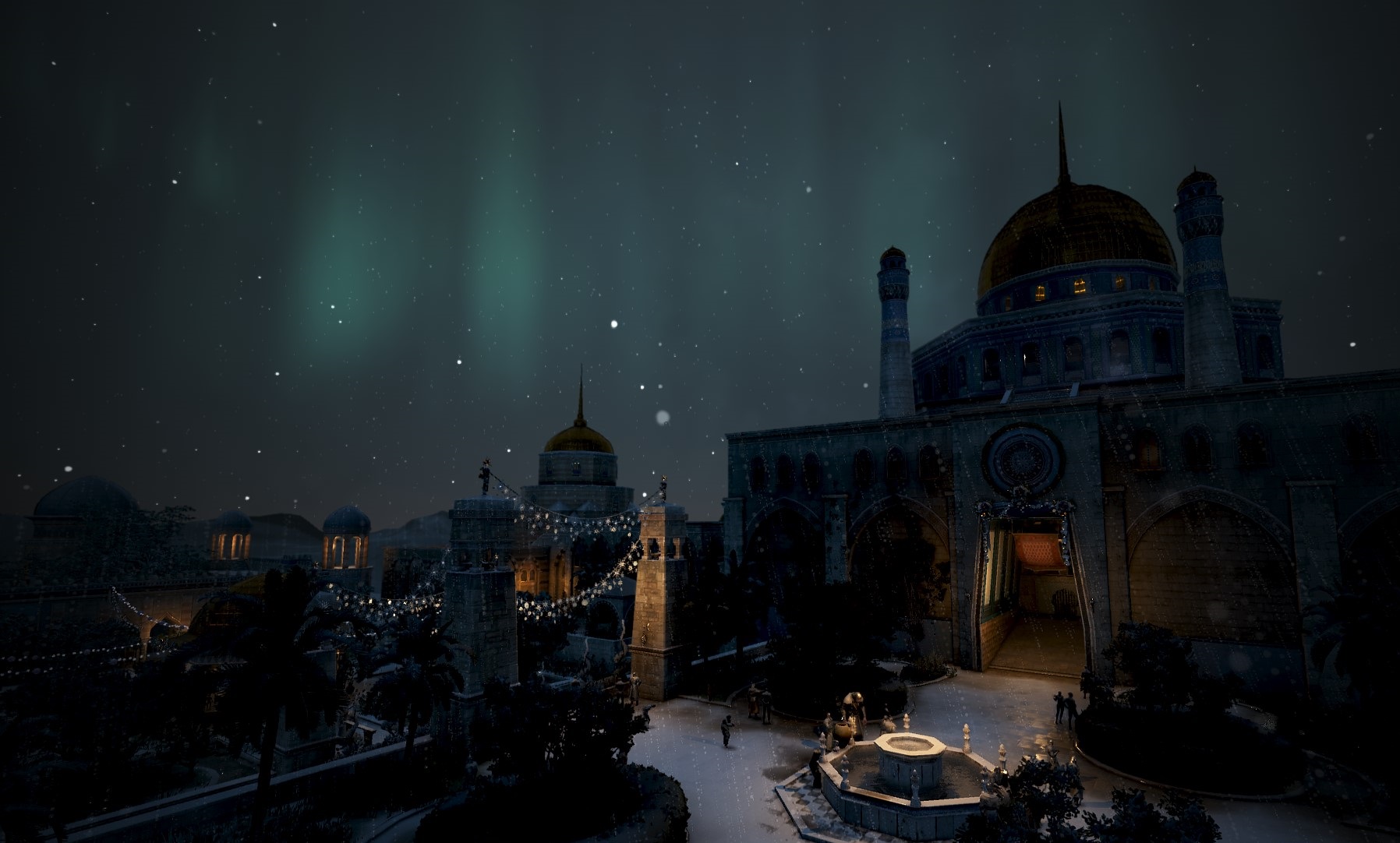 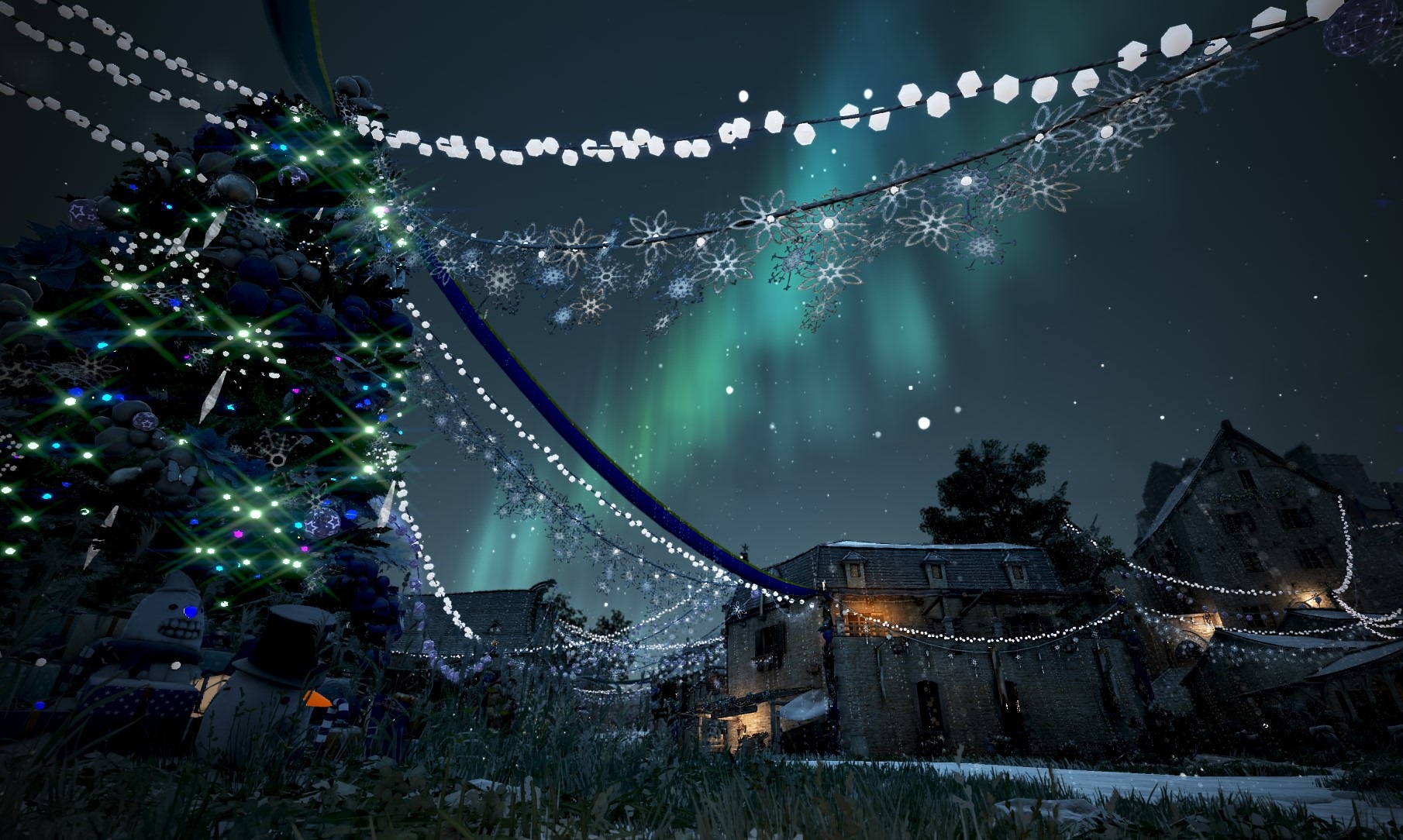 ◆ Added a feature where you can see your crystal set up via the Equipment UI - "View Equipped Crystals" window.
◇ Press the "View Equipped Crystals" button located at the bottom of the Equipment UI within the Inventory (I) window to see the list of equipped crystals.
◇ The Combined Magic Crystal 2- and 4-set effects are not displayed separately and can be checked via the My Stats UI and My Information (P) windows. 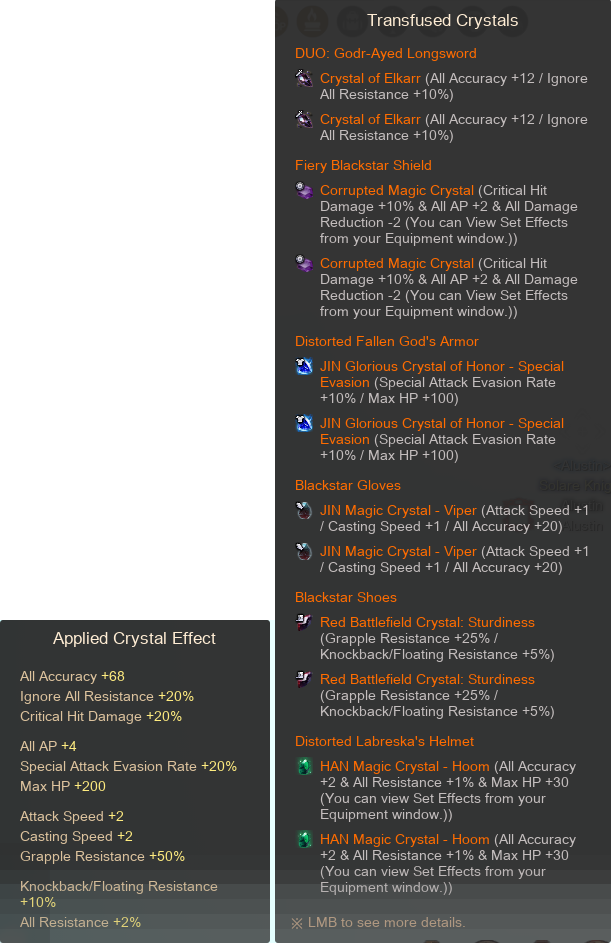 ◆ Improved performance when creating multiple notes in the Music Album's Compose window.
◆ Changed the sound loudness of Florchestra and Marnist instruments to be the same as before prior to the update on November 23 (Wed).

◆ Changed the official website landing page to a video of the new class.
◆ Changed so YouTube channel address with @ symbols can be input in the "Become a Partner" page.
◆ You can now upload YouTube Shorts videos.
◆ Enhanced the security of the Black Desert TV partner registration page.
◆ Fixed the issue of the website appearing in the launcher in certain situations.
◆ Improved the Forum UI.
◆ Added a feature to images uploaded in the Oasis of Knowledge thread where the original image can be viewed via in a pop-up window.
◆ Improved the GeForce link UI in the Download page.
◆ Added a function where you can check Steam's daily refund history.
◆ Changed some text on the Partner page.
◆ Activated the "like" function of the Beauty Album on the website.
◆ Changed the date and time format.