Here are the updates made to Black Desert on December 7, 2022.

(Patch size: approx. 895.25 MB)
- Please note that the update for Steam may be larger than the size listed above.

Event 2. Which choice will you make each day?

Event 4. What’s our gifts this month?

As a continuation of solo-able Atoraxxion dungeons, Yolunakea now joins Vahmalkea and Sycrakea as content Adventurers can enjoy the story of at their own pace via Solo mode.

We were happy to hear positive feedback from Adventurers on the Solo mode update for Vahmalkea and Sycrakea.
The Solo mode for Yolunakea is just like the other solo adventures, where the difficulty has been adjusted so that Adventurers can complete the main quest on their own, so we look forward to seeing your continuous love and support for Atoraxxion and its stories.

※ Please note that in areas where you must proceed via mount, you will be able to select the mount of your choice in [Solo] Yolunakea.

◆ Added a "Solo" mode so players have the option to proceed with Atoraxxion: Yolunakea's main quests alone rather than with a party of 5.
◇ You can begin your solo adventure by pressing the "Enter Solo Mode" button upon entering Atoraxxion via the Sol Magia at the Ancient Stone Chamber.
※ [Solo] Atoraxxion: Yolunakea has been designed so that you can complete the main quest alone, just like Vahmalkea and Sycrakea. 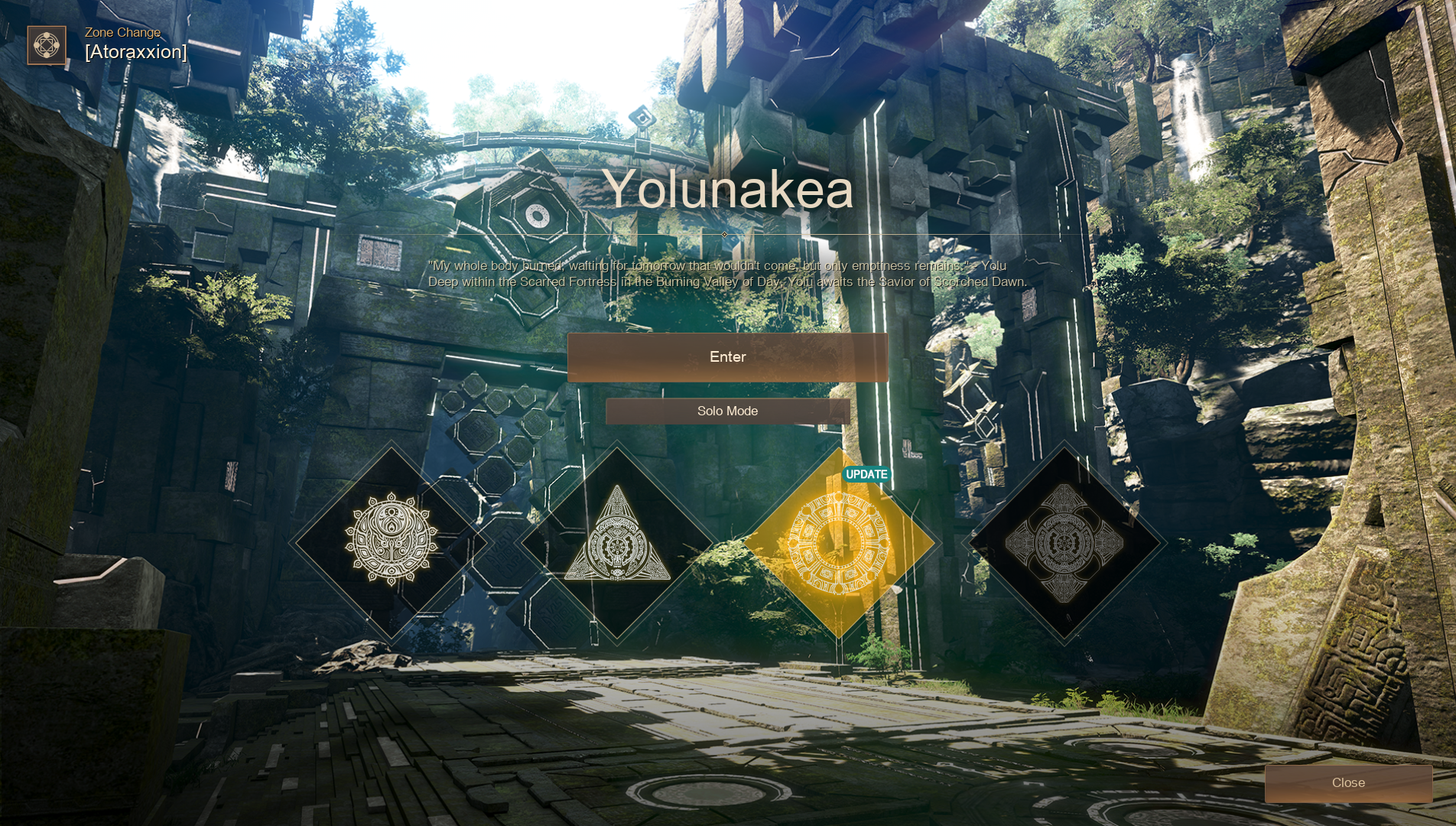 Teamwork within a Guild is vital to taking down Khan, the Guild Boss known as the ""Eye of the Great Ocean,"" so we have created Guild Expedition Regions where guild members can fully focus their attention on coordinating their assault.

You can freely enter and exit the Guild's Expedition Region, however the instance will only remain open for a limited time. So we suggest purchasing a Monsterbane Cannon or designate a ""Seaweed-purging troop” prior to its creation. Please note that after entering, you can summon the Guild Boss by pressing the Summon button via the Guild window. 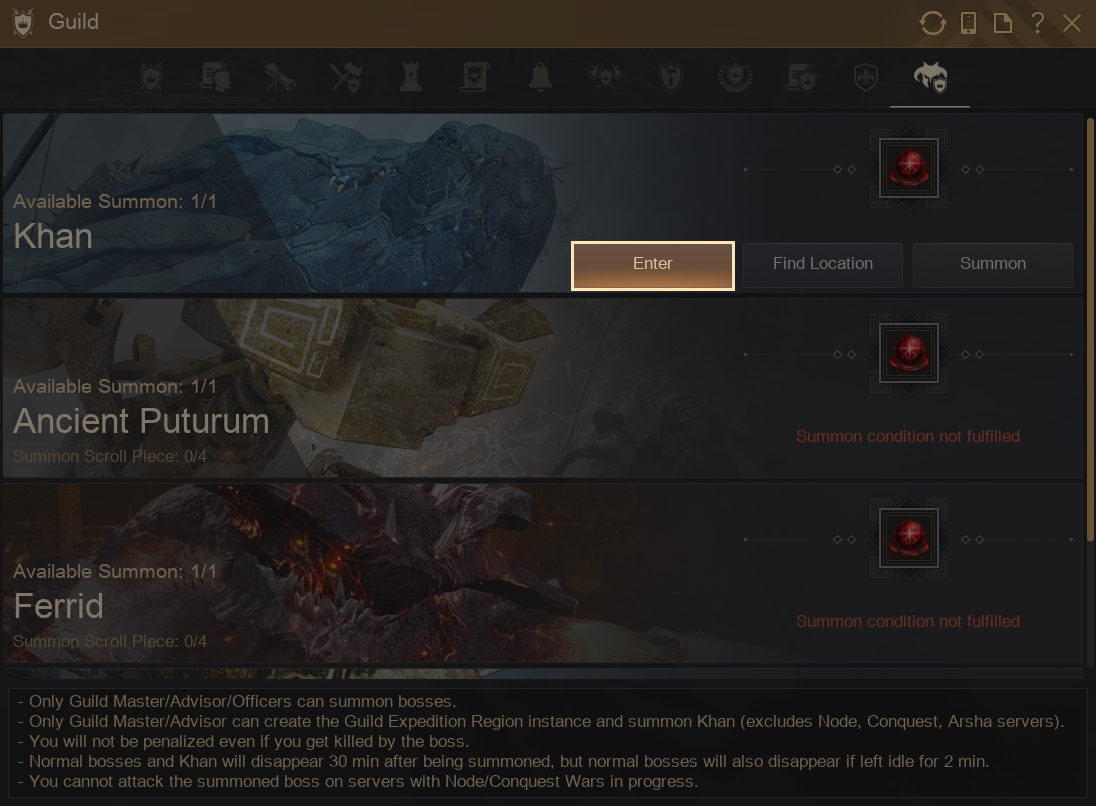 [How to Create the Instance]
- You must be a Guild Master or Guild Advisors. (Edited)
- You cannot be on a Node, Conquest, or Arsha server.

Core: Infernal Destruction
◆ Fixed the issue of not being able to combo attack 1 with Savage Somersault after learning this skill.

Core: Spear Bolt
◆ Fixed the issue where, prior to obtaining the core skill, combo transitions were slow for certain skills upon inflicting dash attack damage. 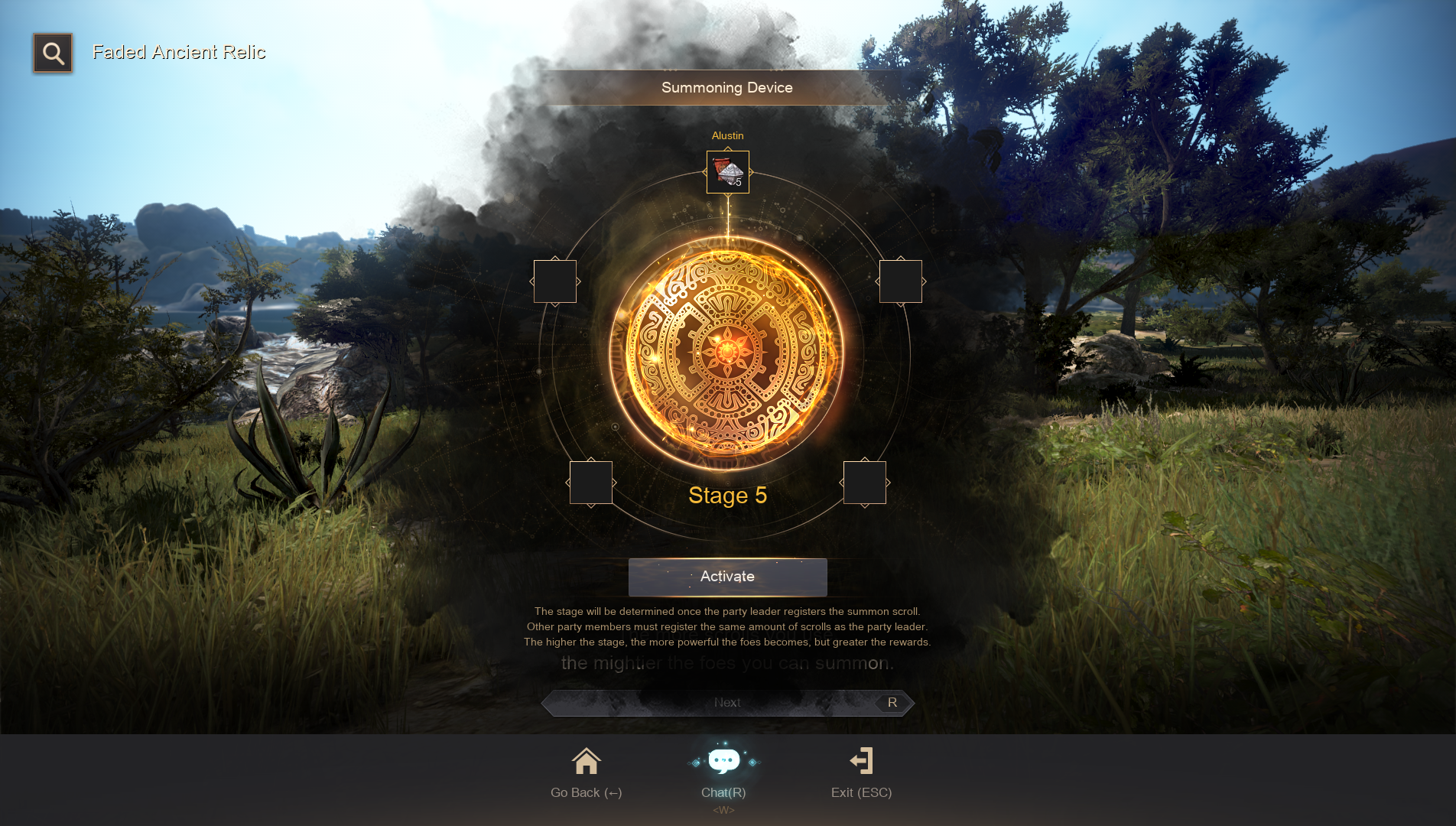 ◇ You can still use the previous method of summoning a boss by using a summon scroll.
◇ Monsters that can be summoned through the "Faded Ancient Relic" NPC are divided into 5 stages. The recommended number of Cartian Spells per stage and AP are as follows:
◇ Regardless of the number of party members, the boss's difficulty and rewards will differ according to the number of summon scrolls registered by an individual, so it is highly recommended to use the Cartian Spells together in a party.
- The higher the stage, the stronger the enemy that will appear, but also the greater rewards.
◇ With such improvements to the Cartian Spell, we've also added a low chance for [Drawn to the Ancient relic] monsters who bear special loot to spawn.
- Defeating these monsters will earn you additional rewards.

◆Added Sturdy Forest Tread to the rewards that can be obtained when defeating Narc Brishka summoned by using Manshaum Narc's Stone. 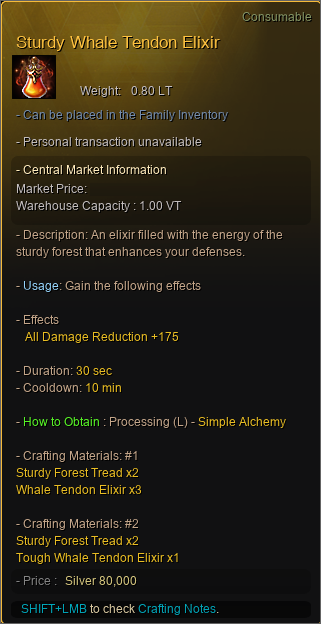 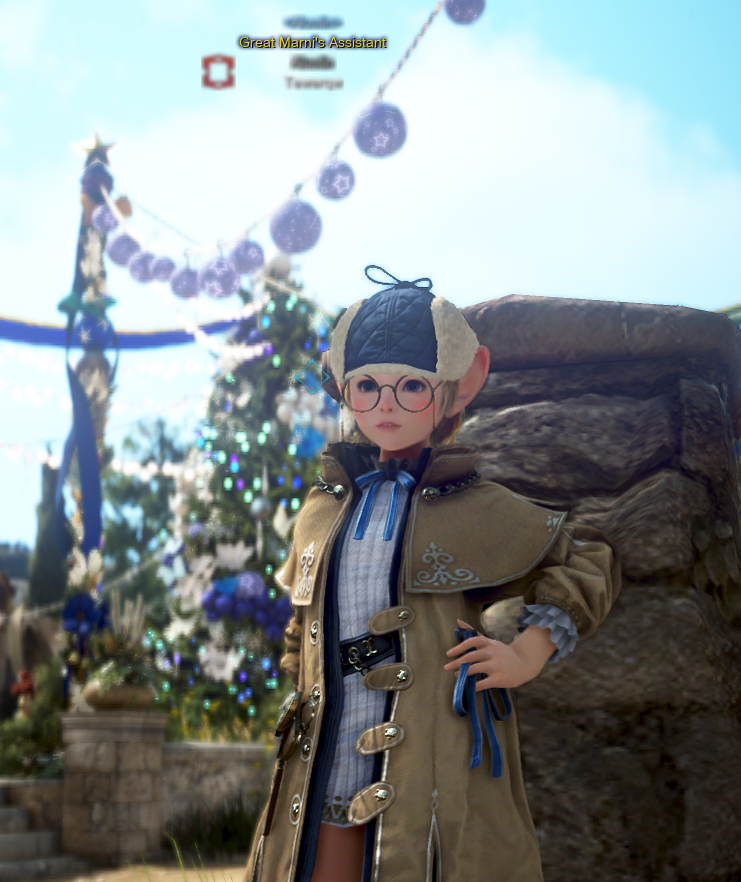 End of 2022 Autumn Season
◆ The 2022 Autumn Season has come to a close.
◇ All season characters that have not been converted will be automatically converted to normal characters during the Dec 7 (Wed) maintenance.
- Adventurers who have not completed either "[Season Server Graduation] At the Crossroad" or "[Season Server Graduation] Into the Big Wide World" will get Fughar's Letter of Encouragement and Gift Box Full of Memories in their Mail (B).
◇ All season quests that have not been completed have been deleted.
◇ Tuvala gear of the highest level per slot that haven't been converted will automatically be converted and the remaining gear will be deleted.
- Example) If you have both seasonal PEN (V) and PRI (I) Tuvala Helmets, the PEN (V) Tuvala Helmet will be converted to normal gear and the PRI (I) Tuvala Helmet will be removed.
◇ Season items (Time-filled Black Stone, Refined Magical Black Stone, Tuvala Ore, Tuvala Conversion Stone, unconverted Tuvala gear, etc.) have been deleted.
◇ With the end of the 2022 Autumn Season, the season servers have been changed into Rulupee servers.

◆ Improved the description of how to craft the "Gem of Imbalance" crafted during O'dyllita main questline.

◆ Improved the following in Atoraxxion: Sycrakea.
◇ Improved the issue of not being able to hit "Syca's Avarice - Apocros" properly in certain situations.
◇ Improved the thread at Syca's Scale to not reset when exceeding the check limit.

◆ Improved the issue of a quest that cannot be accepted from the Suggested tab displaying when doing the Simplified Quest with a season character.
◇ [Social Action] Confident
◇ [Social Action] Fighting Spirit
◆ Improved the issue of not being able to obtain Yeonhwa of Hwasun Valley knowledge when completing "[The Magnus] She Who Dwells in the Past" with the Maehwa class.
◇ Obtain this knowledge via the Black Spirit upon completing this main quest with Maehwa class and haven't learned this knowledge.

◆ Fixed the issue where your character appeared abnormal in certain cutscenes of Atoraxxion: Yolunakea.

◆ Fixed the issue of some compositions disappearing when saving compositions in the Music Album in certain situations.